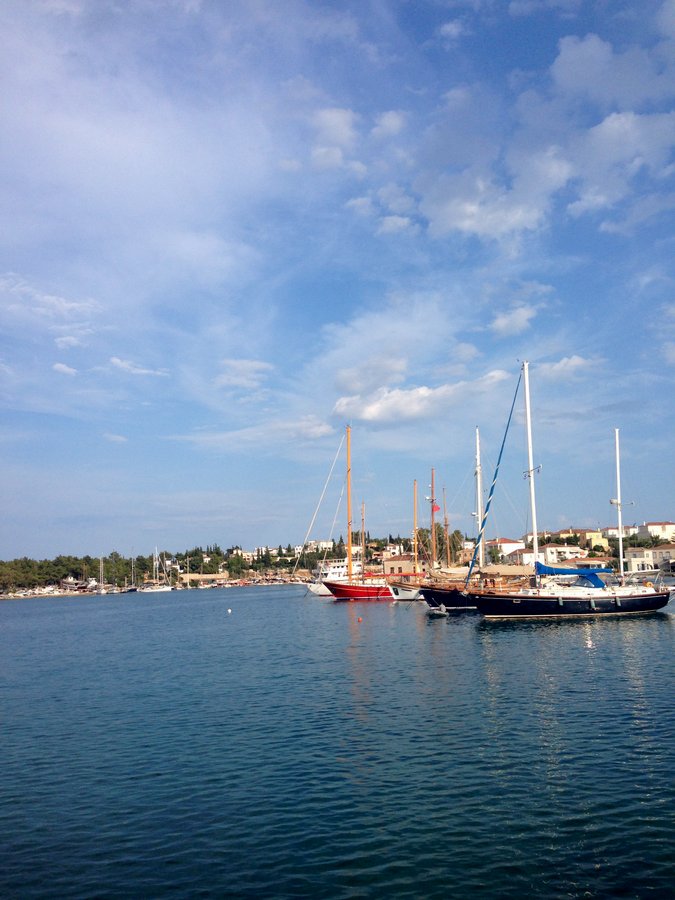 Greece has been on the top of my travel bucket list for years. Even the recent economic challenges only amplified my desire to go (what can I say, this Jewish girl loves a deal). So when my next Alive Tribe retreat was slated for Greece, I knew I had to take a few days on either end to explore the islands.

I had high hopes for hopping around the Greek Isles, but as my early research proved, unless you personally have very few economic problems and own a yacht, this is easier said than done. The ferry system is a rather decentralized beast and difficult to navigate. If you’re planning a shorter sojourn, you’re better off sticking to one of the many clusters of islands or just choosing one for a quick weekend escape. Being prone to FOMO, reading through the guide book did nothing to help me narrow down my options and only made me more depressed at the unlikelihood of my food career ever affording me a yacht. 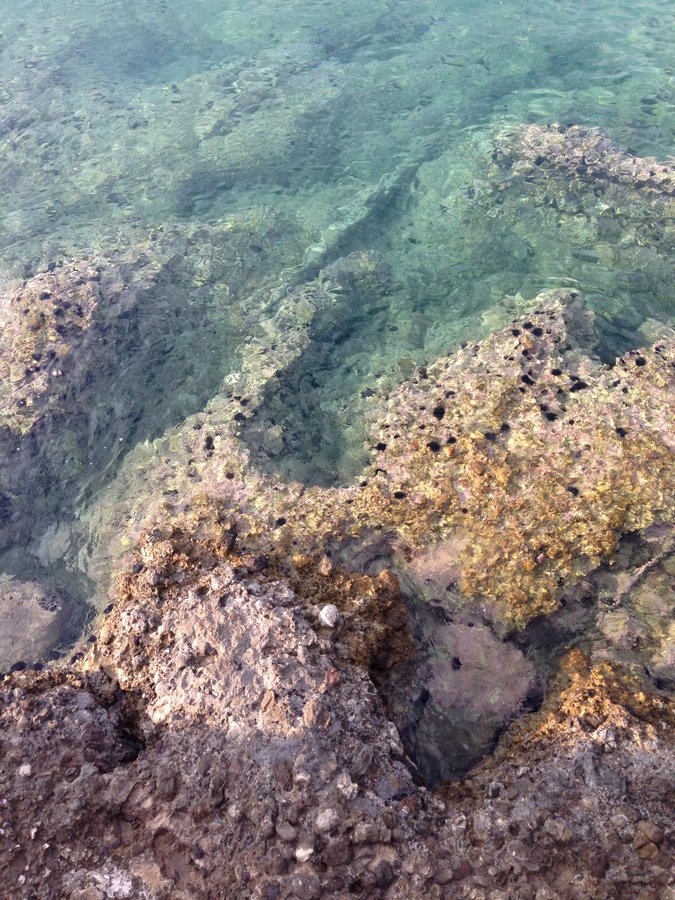 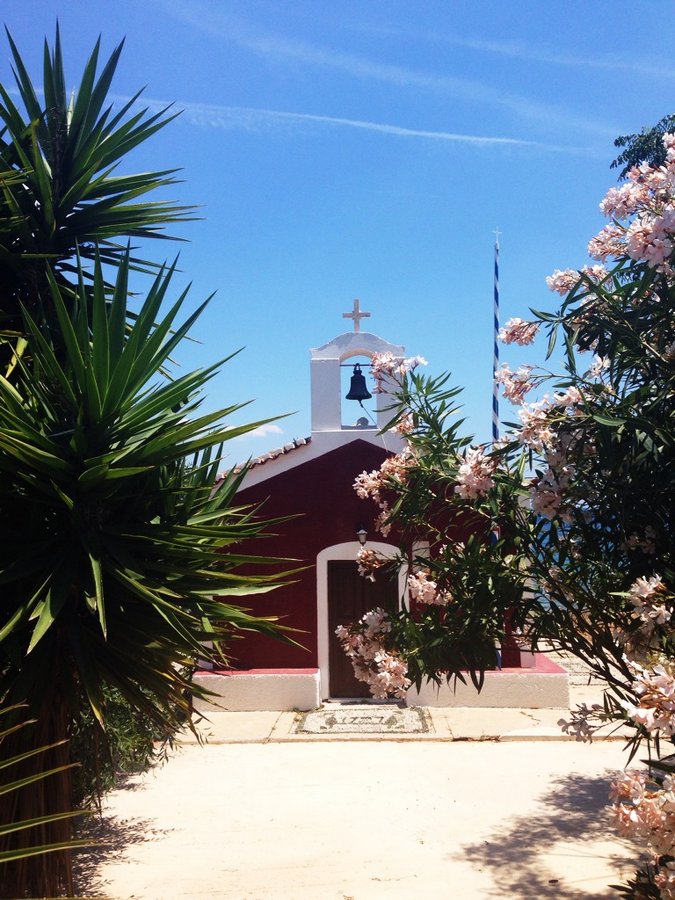 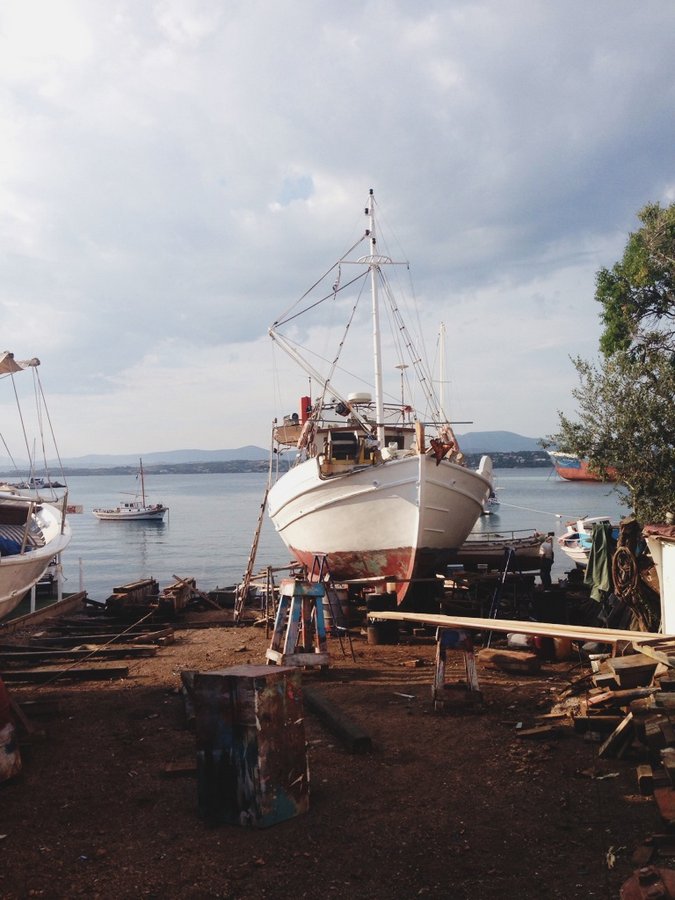 After asking several of my fancy European friends and reading up on a few of the undiscovered spots in the Greek Isles, I decided to go to Spetses, one of the small islands in the Argosaronic Gulf. This cluster is in the Southern part of Greece and one of the main draws is that it’s close to Athens—just an hour or two on the high-speed hydrofoil ferries. Spetses is one of the historically wealthy islands, with old captain mansions lining the harbor and new floating mansions moored in the bay with easy access to the many good restaurants in town.

Especially when I’m traveling solo, as I was on this leg of my Greece vacation, I love places where I can walk. The best part of Spetses is that there are very few cars and most people get around by bike, scooter, or horse drawn carriage. I am infinitely happier when the sounds outside my window include the clop clop of pony hooves, so this small fact sealed the deal. 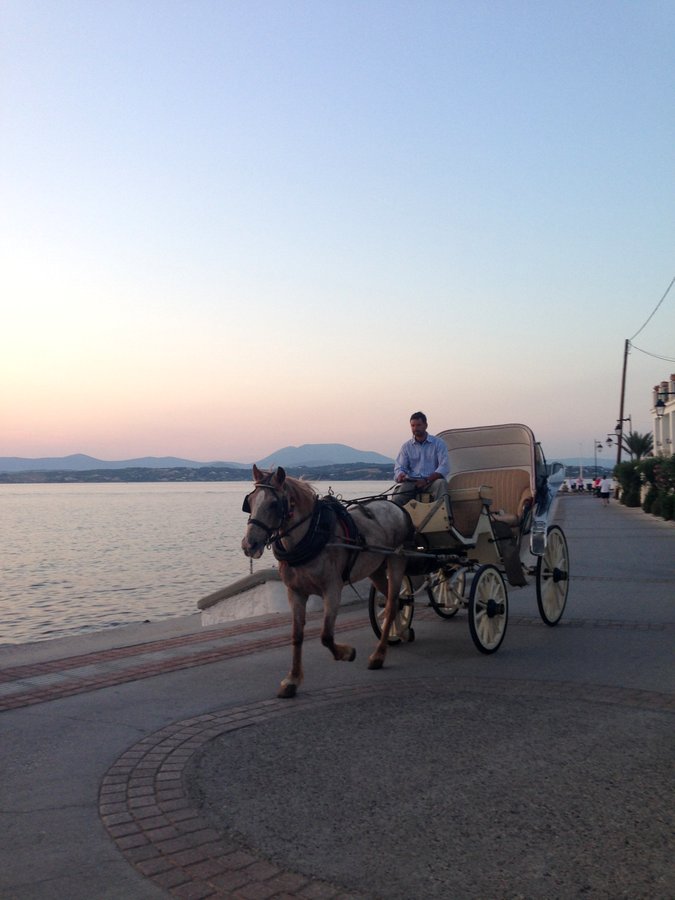 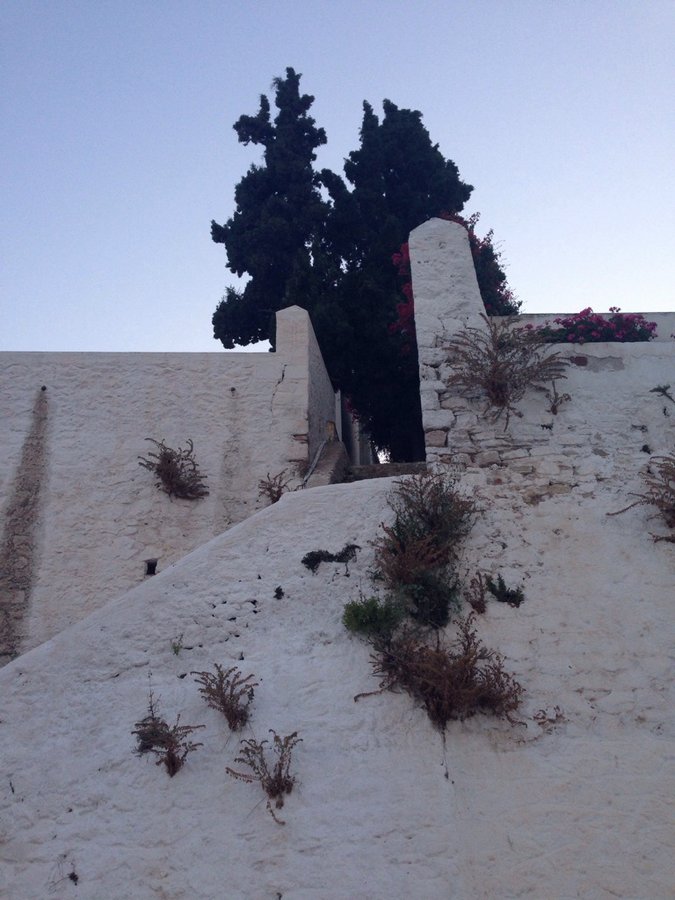 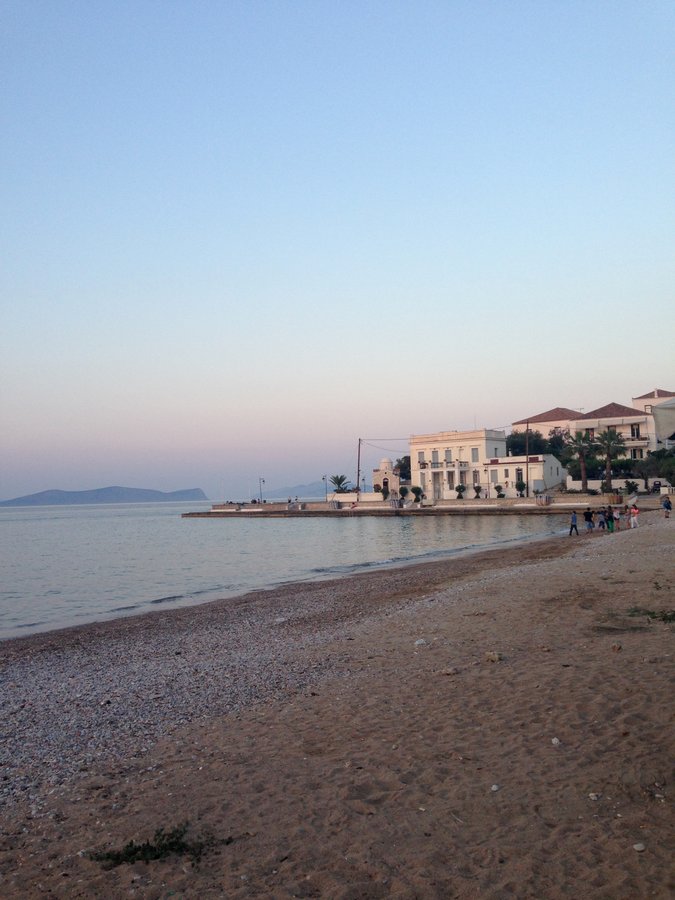 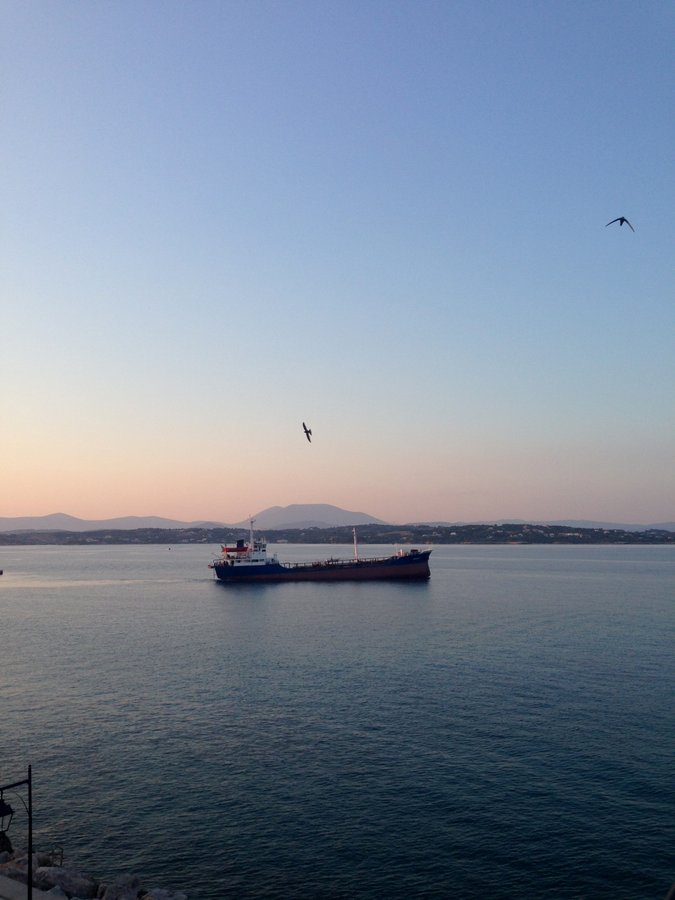 The island is definitely a bit on the sleepy side, compared to some of the more popular tourist destinations like Paros, Santorini, or Mykanos. But it was the perfect size for a weekend escape and just the right speed for me. The beaches are also not the most sought after because they are rocky and lack the white sand that grace so many covers of Travel and Leisure. The water though never disappoints. And even if I found myself for the first time in my life wishing I owned a pair of water moccasins, it wasn’t enough to stop me from spending multiple hours a day porpoising around the shore.

Read on for all my recommendations on where to eat, sleep, and beach. You can’t go wrong on your Greece vacation with a plate of fresh grilled fish, crispy potatoes, and a front row view of the sea.

Getting There and Around

Getting to Spetses is fairly quick and easy, which is probably why it’s a popular destination for Athenians. By hydrofoil (the fast ferry), it’s only 2 hours from Pireaus, the main port in Athens. It’s worth noting though: I found that every ferry in Greece took 30 minutes more than the ticket estimated, so plan accordingly. “Greek Time” is definitely a thing.

Cars are forbidden on Spetses except for residents, so expect to do a lot of walking. There are many ways to explore the island. Most people had scooters, which I was too terrified to experiment with. The outer road isn’t too hilly, so I ended up renting a bike one day and exploring. For more athletically inclined people, it’s doable to bike the whole perimeter, which is about 16 kilometers. But I only made it as far as the first few beaches. Clearly the most stylish mode of travel is by horse drawn carriage, which is one of the many things that attracted me to the island.

There are three areas of the main town that are helpful to know when looking for restaurants or asking directions. If you’re standing facing the water where the ferry arrives (or from The Posiedon Bar), Kounoupitsa is the section of harbor to the left, The Old Harbor is all the way around the bend to your right, and the area around you is the main harbor town center, which is more formally known as Dapia. 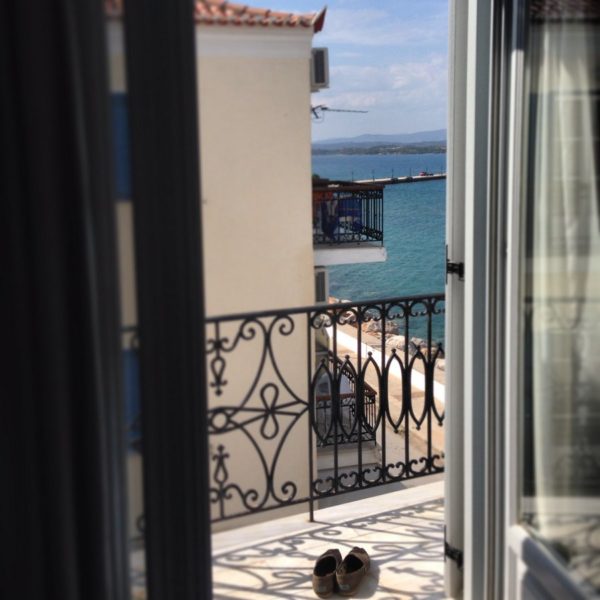 I was on a budget, so I opted for one of the smaller townhouse style hotels right on the Harbor. It was a little noisy, but I liked waking up with the sun and the birds. More importantly, there was a balcony, which I really enjoyed. The room was nothing to write home about, but it’s fairly standard for this level hotel in Europe to be on the smaller side without any frills or feather pillows to speak of.

This is a bit of a walk from Dapia main town and probably a 20 minute stroll from the Old Harbor, but close to Kaiki Beach, which is where all the nearby college students go. They have great balconies and a nice view. It’s a little more of a modern, cheesy option. But if you’re going with your significant other, it’s a better, nicer option than Klimis.

If I had a bigger budget, this seemed like the nicest resort option. Poseidon is a little bit more exposed in the main harbor, even though I’m sure the rooms are beautiful. Nissa is in the quieter Kounoupitsa and right near some great restaurants on the beach. 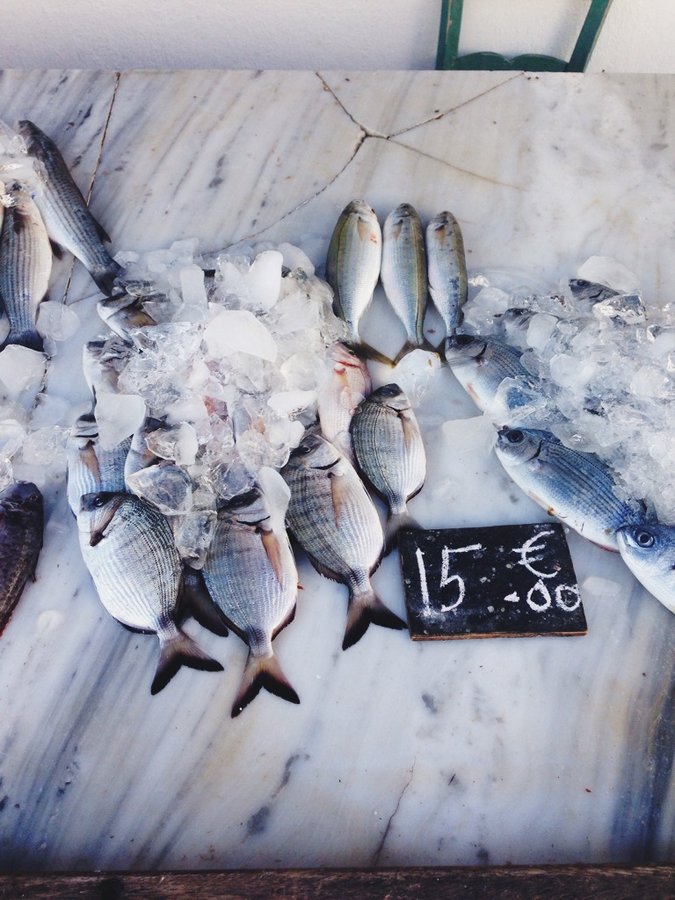 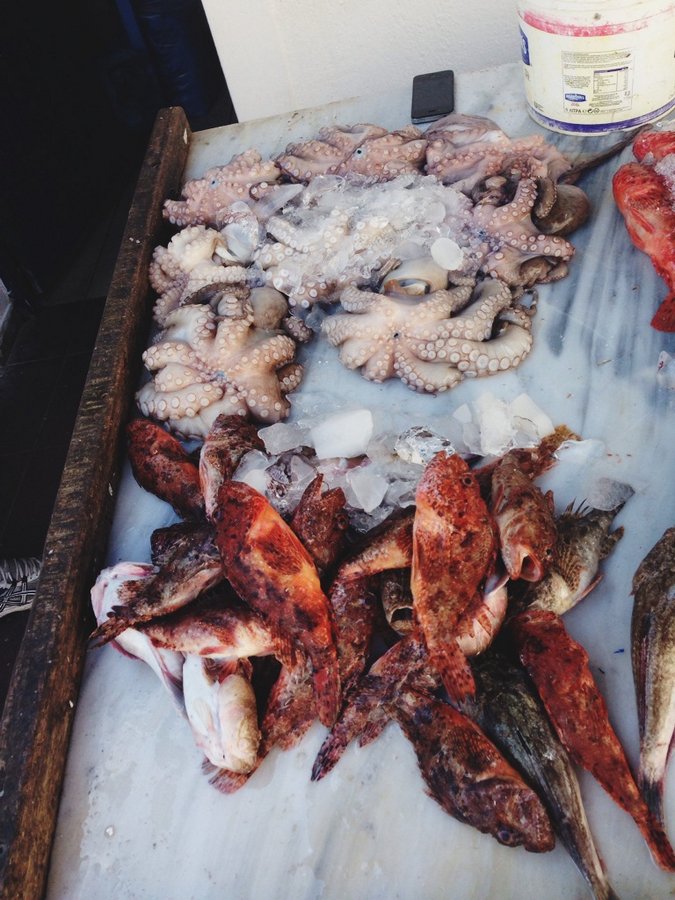 It took me a while to locate some of these places since many restaurants have no address listed and their names are in Greek characters, which look very different from the ones spelled out below. But your hotel should be able to easily direct you, and by the end of my three days, I had walked so much of the towns that I had located most of the spots on my lists. Scroll through the pictures on Trip Advisor and you’ll notice some key characteristics to look out for when exploring.

I had a lovely meal here on the last night. Views are cheap in Spetses, but I loved how the tables, set with that classic blue and white motif, were set up on a small pier that jutted out into the Old Harbor. My waiter was the nephew of the matron chef in charge and a total doll. He let me know with full disclosure what was fresh or not on the menu and dissuaded me from the octopus. The baked anchovies I ordered clearly were dredged and then fried before being tossed with tomato in a casserole dish. But I didn’t want to insult him, so I risked the gluten and ate some of it anyway. It was great. My favorite dish though was the roasted eggplant. They roasted two small ones whole and then topped them with tomatoes, onions, capers, and lots of garlic. It was heaven. I ate almost the whole thing. 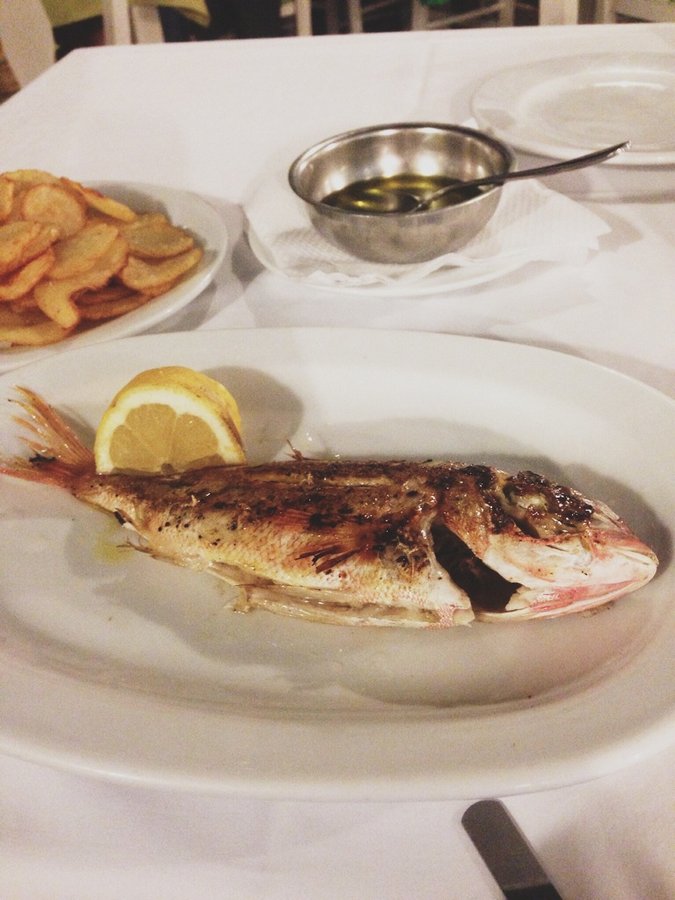 Of all the places I visited in Greece, this restaurant had the best fish selection. Make sure you ask to choose your own fish, which is what all the Greeks do to make sure what they’re getting is fresh and that you’re not being ripped off for the weight and price. I got a Greek salad to start and then a whole grilled sea bream with crispy potatoes on the side. The lobster pasta looked amazing, and if I could eat it, that’s what I would have ordered.

I didn’t eat here, but wish I had my first night instead of Spetsiotiko down the street, which was terrible. It was packed most nights and got good reviews on Trip Advisor for the fish and seafood pasta.

I didn’t get a chance to try this taverna either, but it looked cute and delicious. The tables are right on the beach in Kounoupitsa and it seemed to be very popular with the locals. 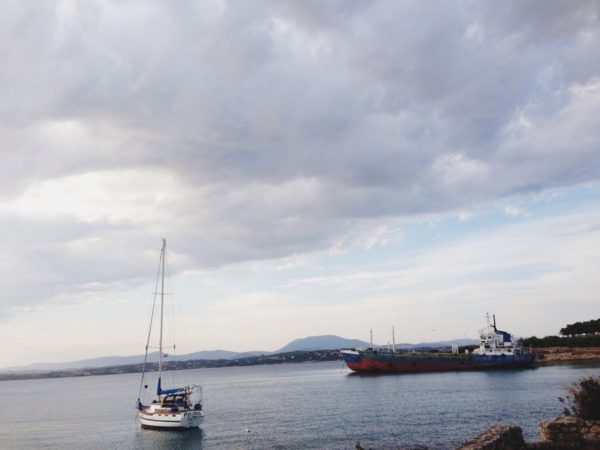 I was in the mood for casual inexpensive places since I was traveling alone. But these restaurants seemed to get good reviews and were highly recommended by various articles and friends I talked to.

Right next to Patralis. More upscale and expensive. I liked the stark taverna vibe better of Patralis, but it’s really a matter of taste.

The fancier outpost of NTA (above) in the Old Harbor, known for the pricy fish.

This was a chic taverna with a little more of a modern menu. The atmosphere was a really nice mix of old and new, with seats on the white stone patio overlooking the old Harbor.

This place was on every list for its expensive but delicious Italian food. 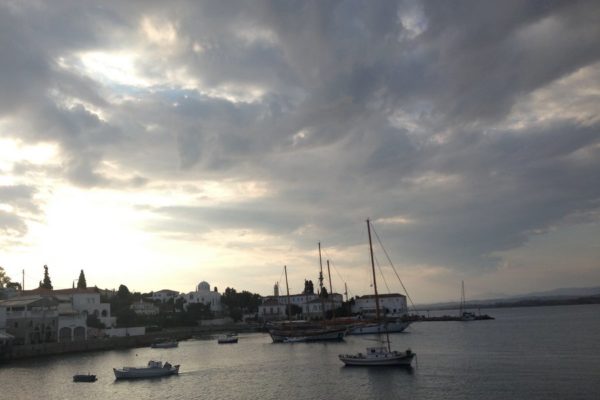 I was clearly too much in loser mode to attempt going out by myself for a cocktail. But a Greek friend of a friend suggested these places, and I’ve included his comments below.

More upscale. You can go for dinner and then drinks. It’s the only place in Spetses where you most likely will have to wear pants (vs. shorts) to get in.

Great for a sunset cocktail. Beautiful view and right on the harbor where the ferry comes in. 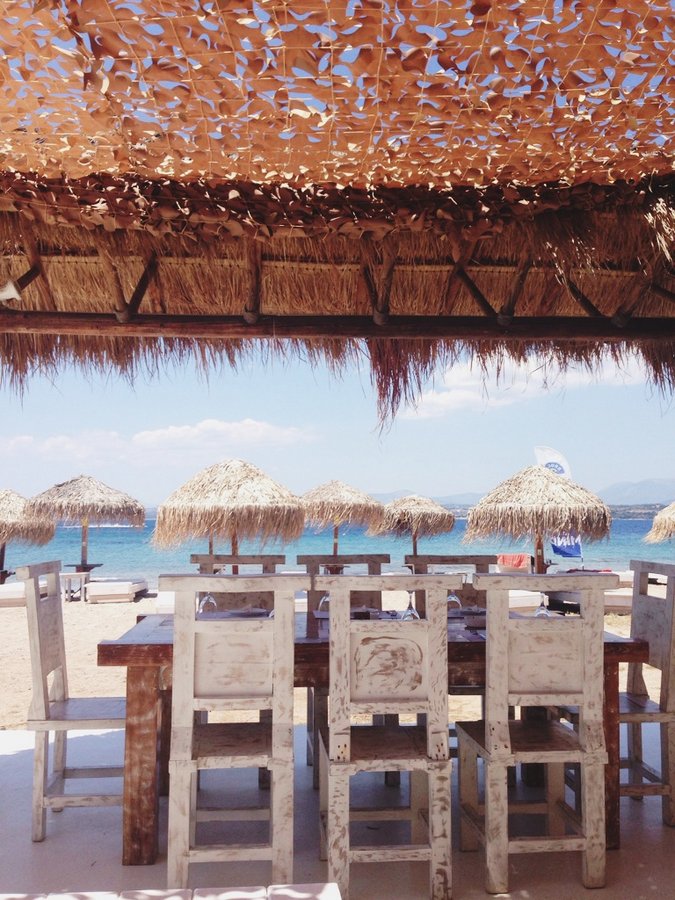 I love walking, so the first day I just strolled to Kaiki Beach (above), which was a very easy walk from town—about a mile from the main harbor, just past the Spetses Hotel. They have a bunch of beach chairs and the restaurant is an upscale taverna that had decent meze and pastas. It’s definitely more crowded than some of the other beaches, but fun if you want to rent kayaks or play volley ball. 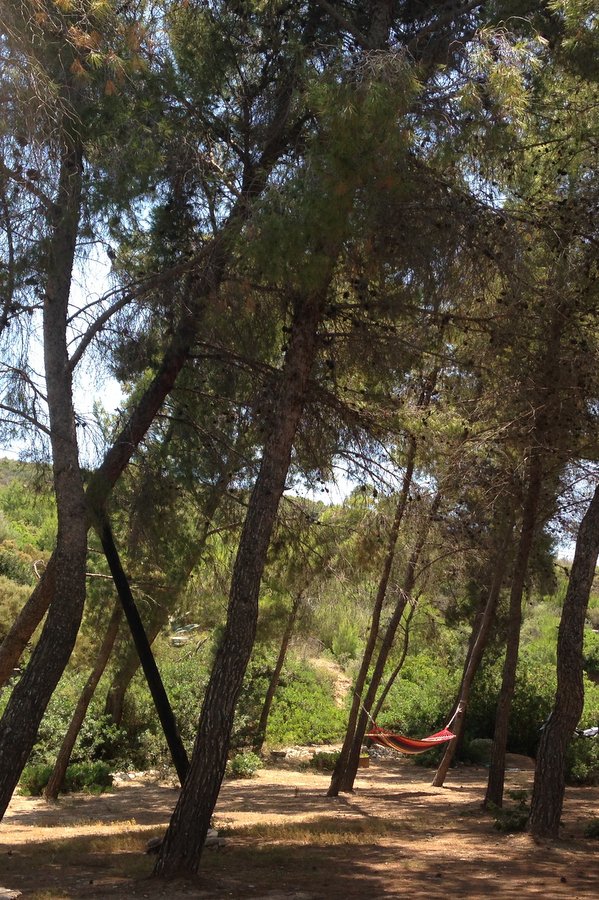 The next day I rented a bike and rode to Vrelas beach, which was a beautiful little cove with a casual souvlanki stand. The bike ride took me 30 minutes or so and was only mildly strenuous. I was more nervous about a scooter racing around the corner and killing me. There are no guardrails in Spetses and the roads are crazy windy and narrow. Vrelos has a beautiful patch of pine forest for cover with hammocks. If it weren’t for the horse flies, I would have relaxed here for hours.

You can reach any of the beaches by water taxi, which is a fun way to do it. But I loved the views from my bike ride, and if I was more in shape, I could have definitely reached some of the further spots.