The last time we were in Paris 3 years ago, my husband looked up a list of the best croissant in the city and was determined to try them all. 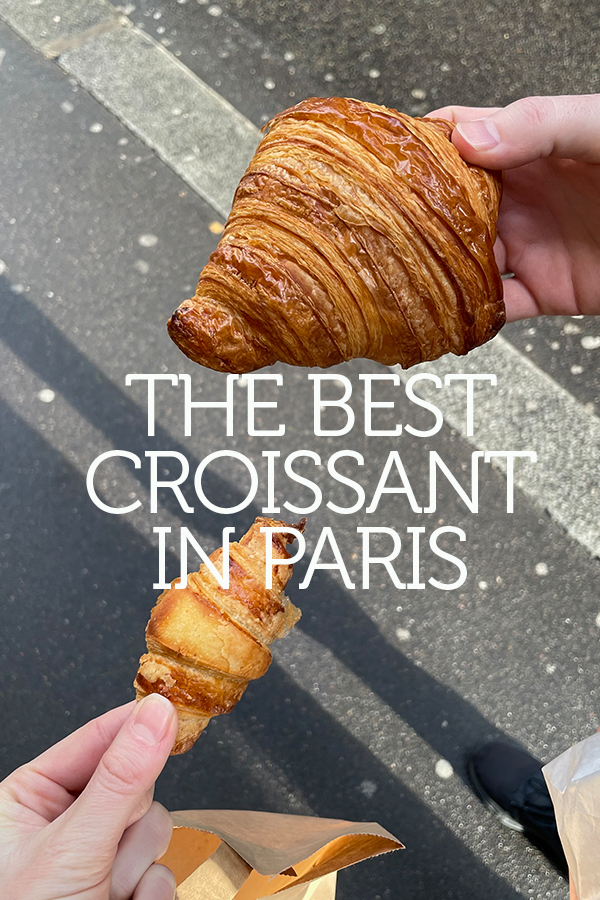 This was in 2018, and it being pre-pandemic times, we had a lot of ground to cover in the city—restaurants to dine in, museums to wander. Needless to say, trekking several arrondissement out of our way in the name of picking up a pastry that I could not eat (if you’re new here, this is a gluten-free website!) did not rank high on our collective priorities.

But this trip being in COVID times, who wouldn’t want a citywide scavenger hunt that kept us outside? And thus, the 2021 #croissantcrawl was born.

As we began posting Charlie’s first few finds on Instagram, this name became controversial with French speakers, as he was often critiquing pain au chocolat and not just plain croissants. This might give you an idea of how well-thought out the crawl was in its naissance.

But as we got going, the criteria began to take shape: texture, flavor of the pastry, chocolate (distribution and amount). And the ratings were on a scale of 1-5 belly rubs, 5 being the best.

To create his list, Charlie cross referenced a few of the best croissants in Paris articles like this, this and this. Many of these mixed different kinds of pastry. After dabbling at the beginning, we decided to just compare pain au chocolat. You can see those in the first half of the list, and then we included a few other favorite croissant he had elsewhere.

There were still a few boulangeries that we didn’t get to, so if we missed one of your favorites, please weigh in in the comments section! We try to come back to Paris (where I spent some of my childhood) every 3 years or so, and will happily pick up this quest then.

Also, clearly I did not personally try any of these pain au chocolat and at times disagreed with Charlie’s findings simply on look, feel and taste-memory. Don’t shoot the videographer!

Lastly, if you too are gluten-free and this post makes you drool with envy, there are some outstanding places in Paris for gluten-free bread and pastries. Check out my on-going guide to Paris here. I update it after every trip! Croissants are the hardest gluten-free pastry to find and are often just a shell (or a mini me version) of the real thing. See the picture above – the little guy is the GF croissant!

And without further ado, onto the best chocolate croissants in Paris.

We are going to start in descending order, so please read on for our favorites at the end! Also note that while some boulangeries did not have our favorite pain au chocolat, they sometimes made a mean croissant, which we accounted for at the end.

I must also note that the competition between the top 4 pain au chocolat was very stiff. Any one of them is a fantastic treat. 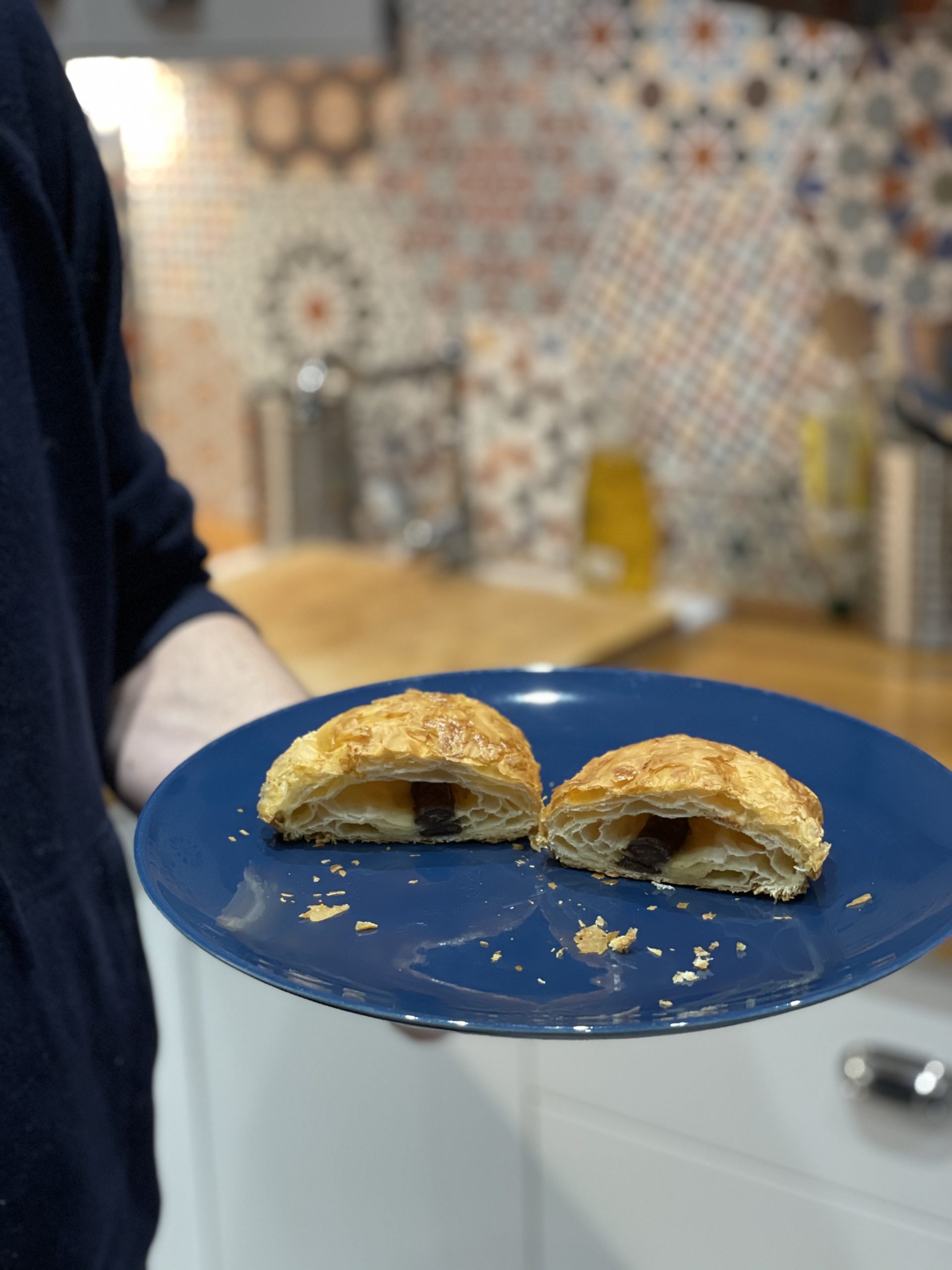 This croissant came recommended by a reader. It wasn’t on our original list, but we happened to pass by and wanted to give it a try. Charlie was not impressed by the flavor and said it was on par with a mediocre hotel pain au chocolat he had deigned to eat at another point in the trip. He is a stickler for chocolate distribution and as you can see instead of two separate tubes, they are stacked on top of one another. Mon dieu!

Charlie is not one to judge a book by its cover, but if the nearly burnt outer shell was any indication, perhaps we had stumbled upon a bad batch at the end of the day. The interior was no better: dried out and overbaked. Though he did add a generous note that it gave the pastry an interesting peaty flavor. This was a real shame because the regular croissant (though also from the end of the day) was exceptional. You can see them side by side below. 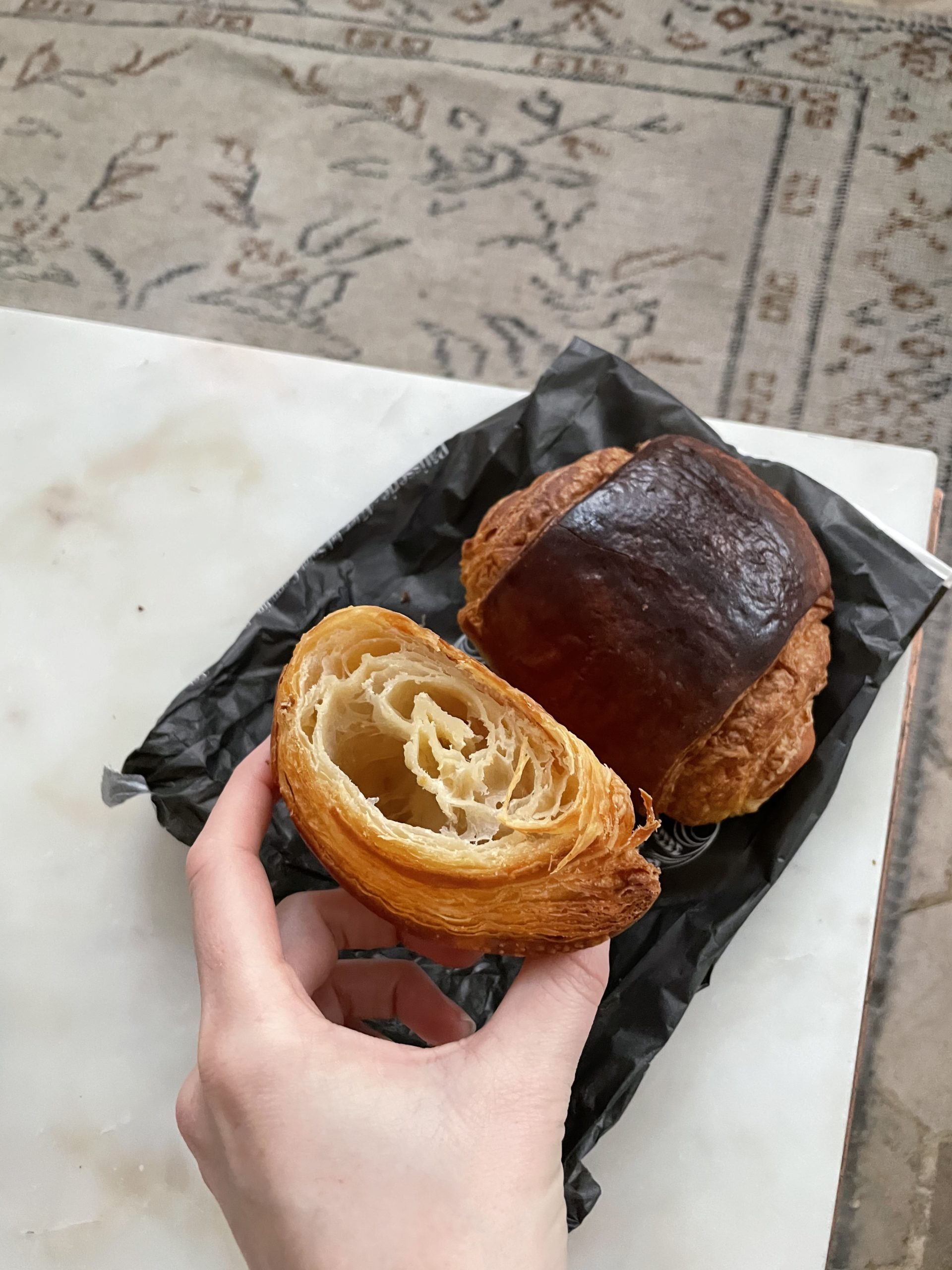 This was another boulangerie that we happened upon after wandering down from Montmartre into the Pigalle neighborhood. It had a long line outside so we gave the PaC (pain au chocolat) a try. It was a little small in form and not nearly crispy enough on the outside or flavorful to put it in the top half of the rankings. He tried it side by side with the La Maison d’Isabelle and it still was head and shoulders above, even if only .5 in the belly rub ratings.

This PaC from the trendy Oberkampf neighborhood had very little chocolate, which is one of the main elements that tips the belly rubs in a boulangerie’s favor (this is my husband’s rating system, after all). But he said that the pastry was super tasty and almost made up for it. He wanted to also note that this boulangerie is better known for its baguettes and other breads. Charlie had a ham and cheese sandwich that he said was the best of his life. 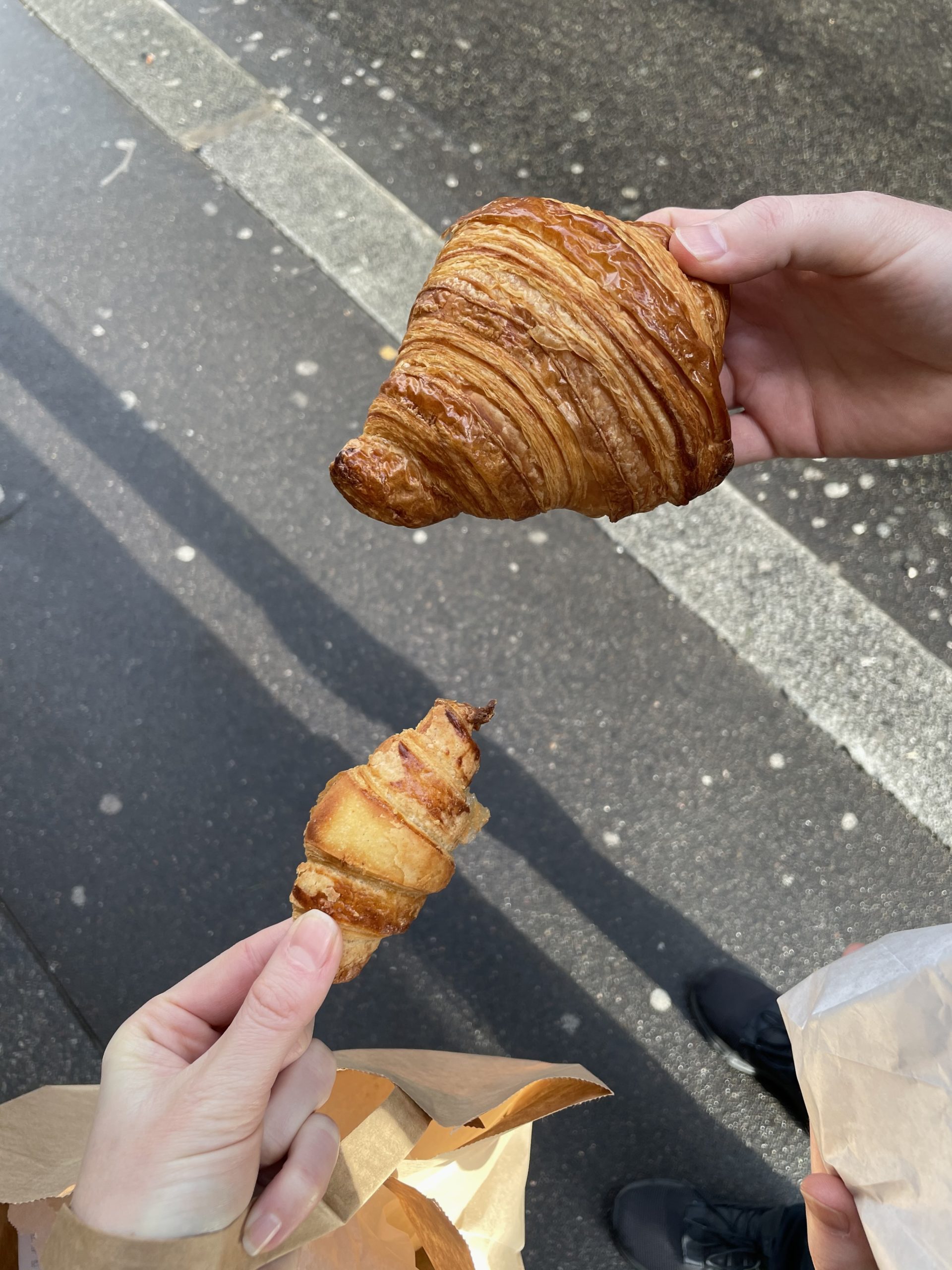 This was the first stop on our very long croissant crawl and the regular croissant shone a little brighter than the PaC (it’s pictured above alongside my sad GF croisant from Noglu). Charlie said that the pastry had amazing flavor but it wasn’t airy enough for his liking. The outside has a perfect, crisp feel to it but the inside was too doughy. Editor’s note: this is my kind of PaC! But I defer to the judge. 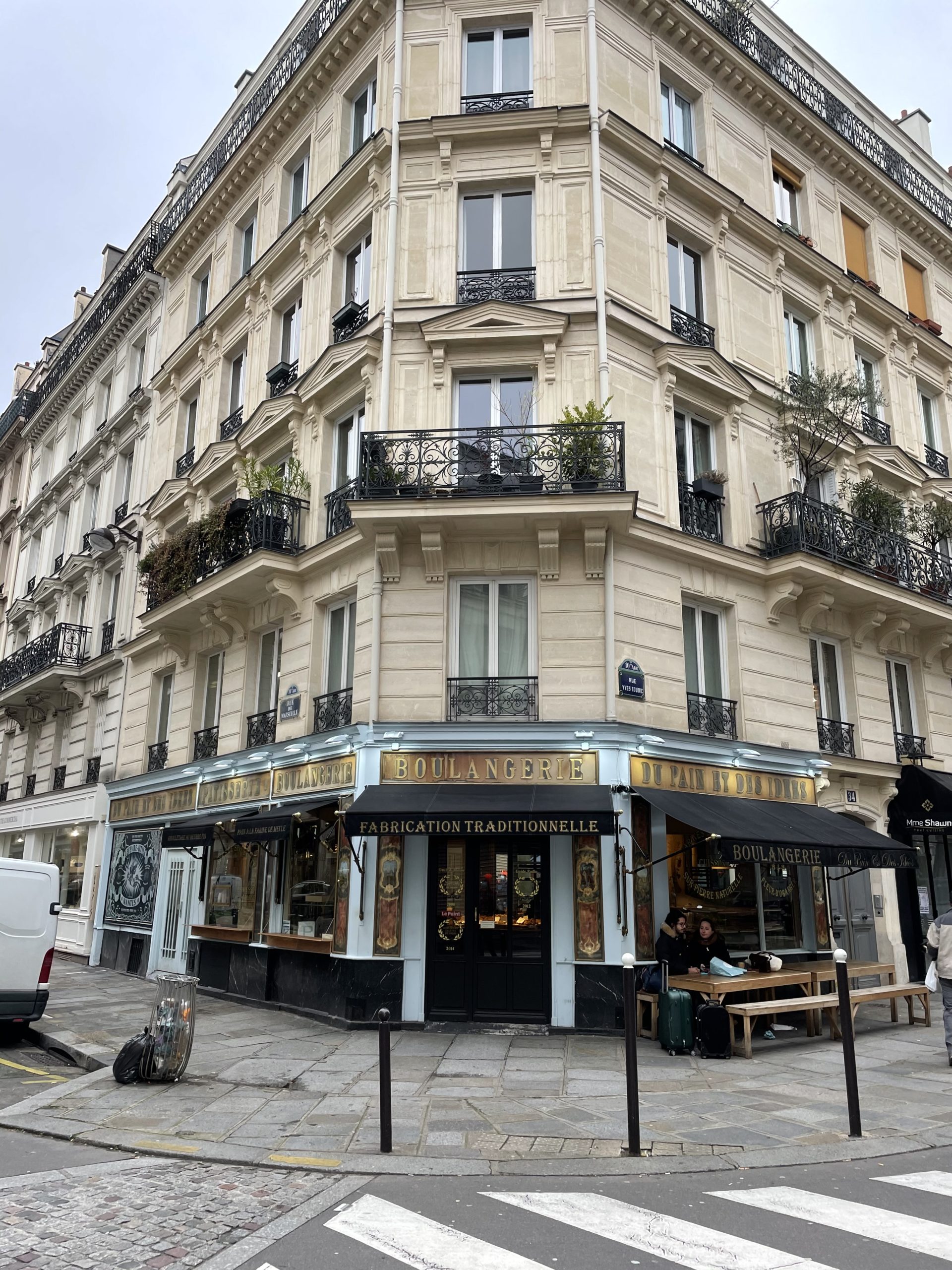 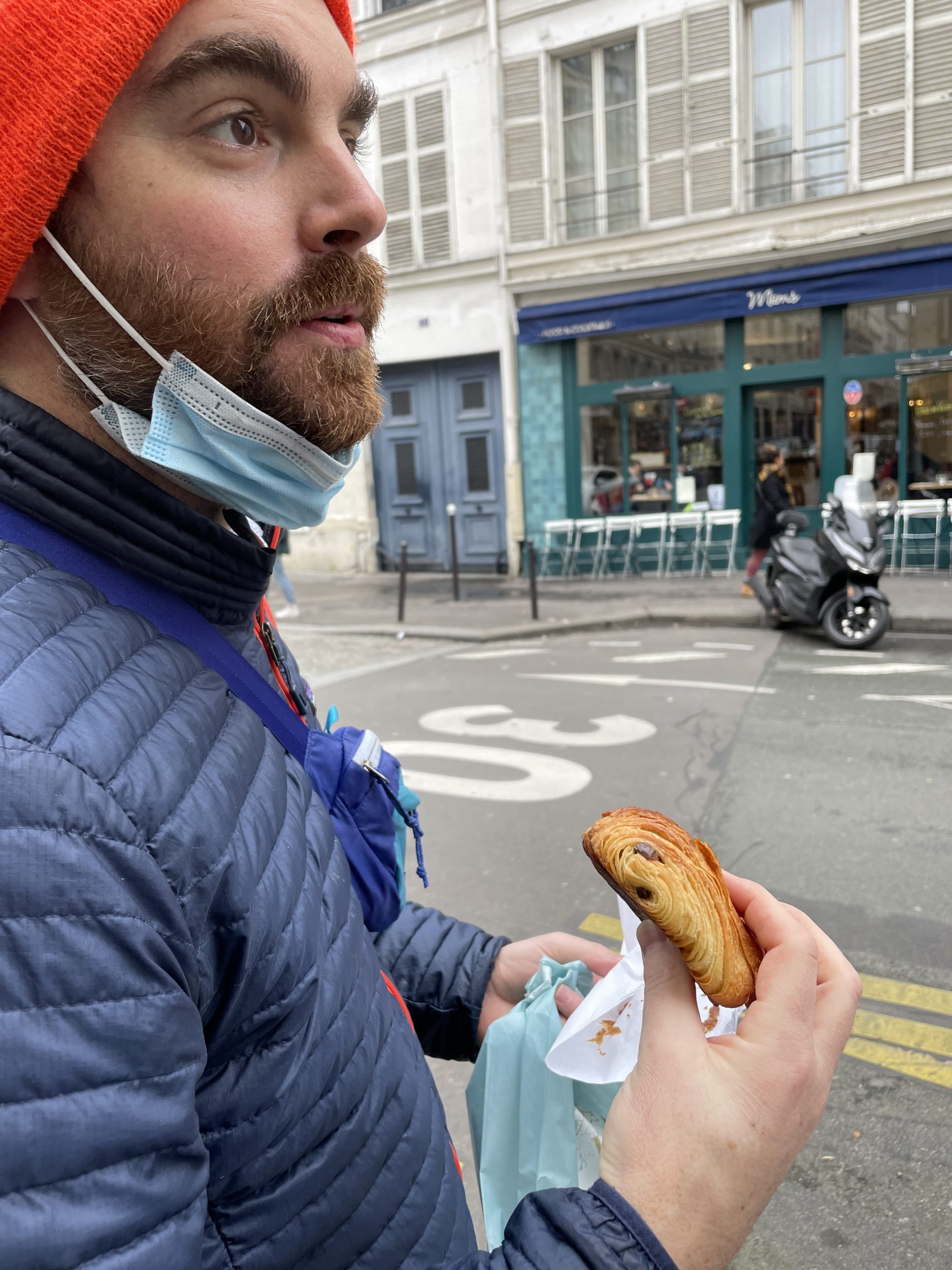 Okay, now we are getting to the big guns. From here on out the ratings were very close and all were met with many belly rubs. This PaC had some of the most beautiful lamination, second only to Mamiche below. It also had some of the most flavorful chocolate. The distribution wasn’t as even as some of the others, but it was thick and really made a statement. Ultimately, though extremely enjoyable on the chocolate and texture fronts, Charlie didn’t feel that the flavor of the pastry was as strong as some of the remaining contenders.

Personally, I wasn’t that impressed by the look of this croissant. But it had not one or two, but THREE barrels of chocolate inside. I’m surprised it didn’t win outright just for this feat, since we know how our judge loves chocolate quantity and disbursement. Where this PaC got dinged was on the outer layer, which was ever so slightly over baked and dry (perhaps what my eye was picking up on). 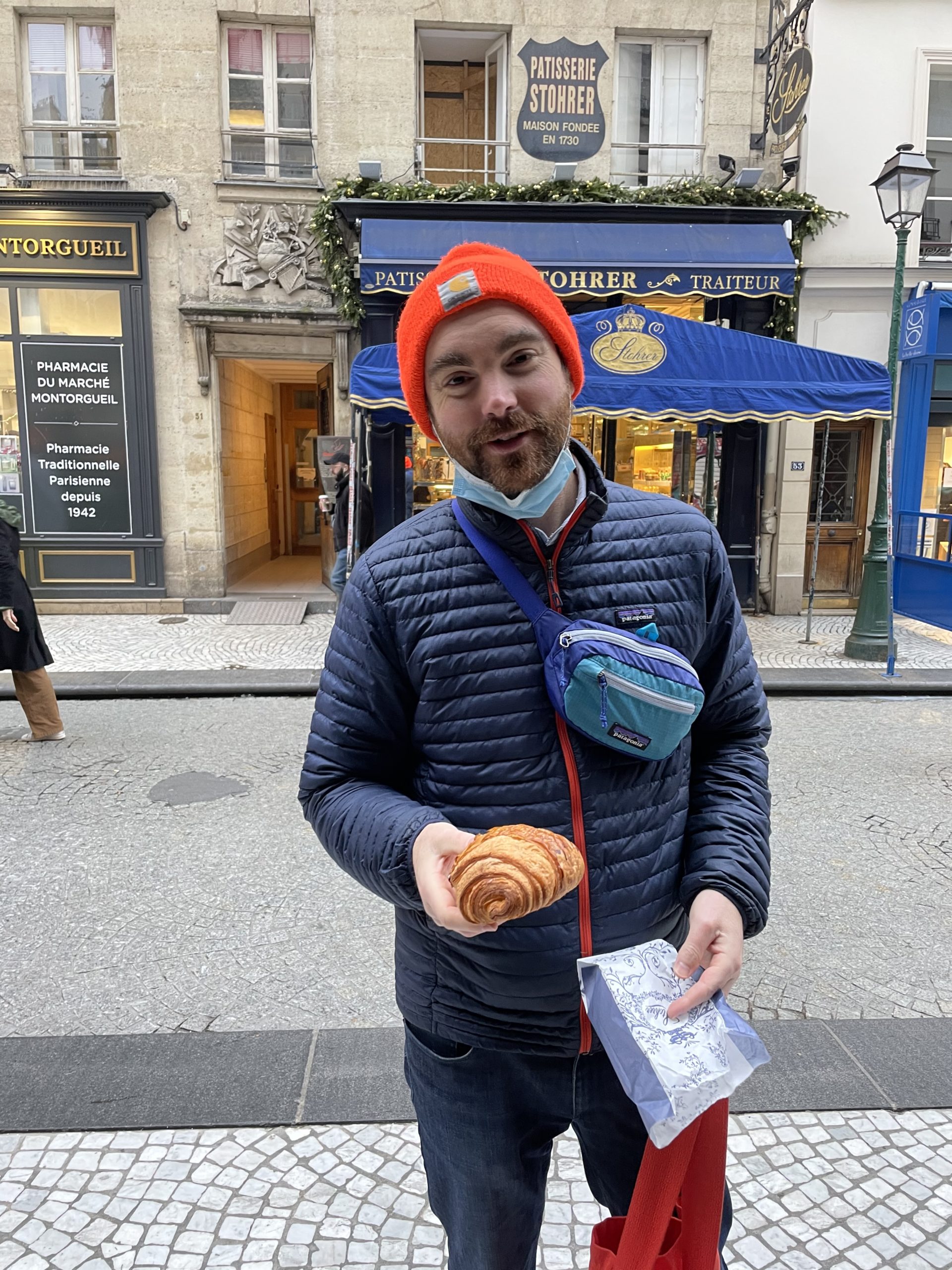 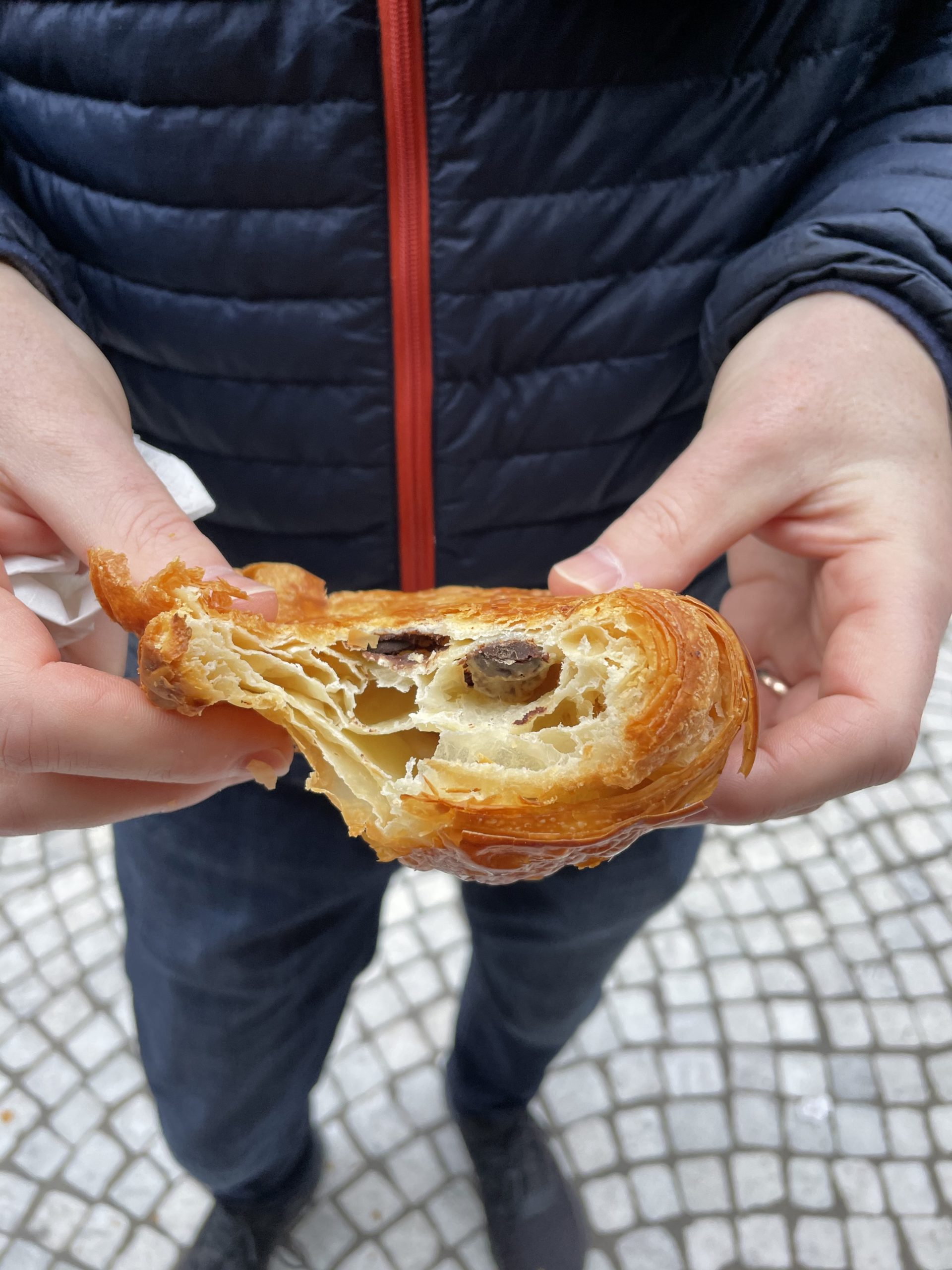 Many PaC connoisseurs feel that this is the best in the city. The boulangerie, after all, has been around since 1730. When we last began our very limited quest to find the best pain au chocolat in Paris this was the one place we stopped. The croissant was warm and fresh out of the oven, even though it was midday. So for full context: this was the sentimental favorite. The fact that when we retried it the croissant was not warm put it on even playing field at least with the other pain au chocolat tasted. And for the most part it still held up. The Stohrer PaC is the biggest, tallest and airiest of the bunch. There wasn’t a ton of chocolate and it wasn’t evenly distributed, but the flavor and texture of the pastry makes up for it. 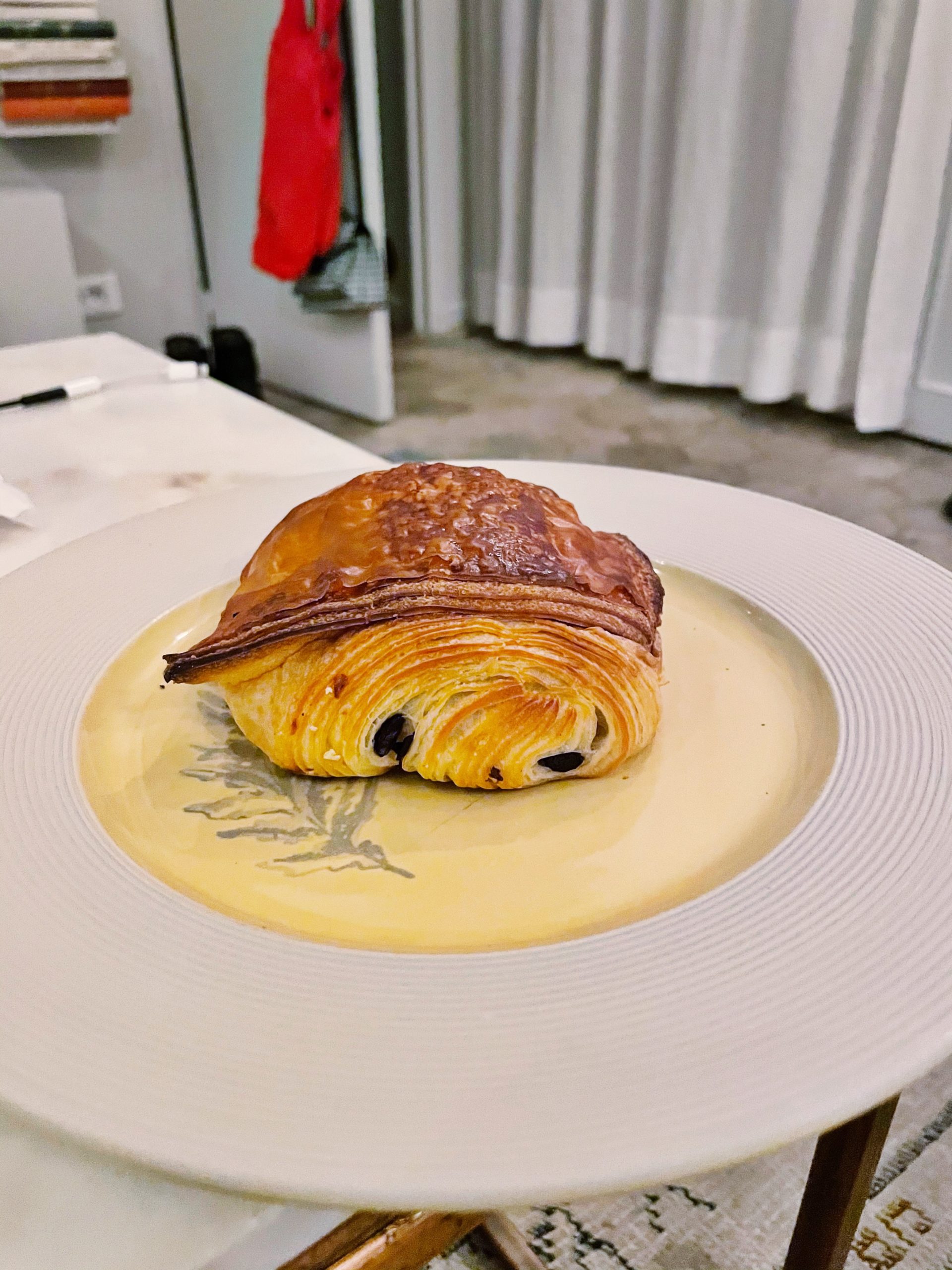 Ok, we’ve made it. Drumroll please…the Mamiche pain au chocolat is officially the best in Paris as declared by my husband (and a few other people who have had it). The lamination is what baking textbooks opine about. The chocolate distribution was solid. The flavor of the pastry was strong, if not the best in the bunch. Overall, it’s a sexy sight to behold and sink your teeth into.

THE BEST CROISSANT IN PARIS

La Maison d’Isabelle
Belly rubs: 5
While the pain au chocolat was dark in color and arguably a little burnt, the regular croissant was absolute perfection. The only treat in the whole matrix to earn a perfect belly rub score and the declaration “this is the best croissant I’ve ever had.”

This special shout out goes to Maison Landemaine’s almond croissant. We don’t know if it’s the best because it was the only one that Charlie tried but he was immediately blown away. It was quite flat, but very buttery and flavorful. Unfortunately, the pain au chocolat was sold out for the day, so that’s how we ended up judging the almond. A happy accident!

So there you have it, 100,000 calories later, these croissants and pain au chocolate are the best in show.

We set out on Google Maps to try 16 boulangeries and we managed to cross 10 of those off our list. Here are some of the other places that we didn’t get to but were also rated highly: Ble Sucre, Farine&O, Gontran Cherrier, Laurent Duchene, The French Bastards and Pastry Colbert.

Please let us know if we skipped any of your favorites or if you take issue with any of these ratings! We welcome the controversy.