The star of the show in this sausage pasta bake is the greens, which are actually purples: radicchio and endive. 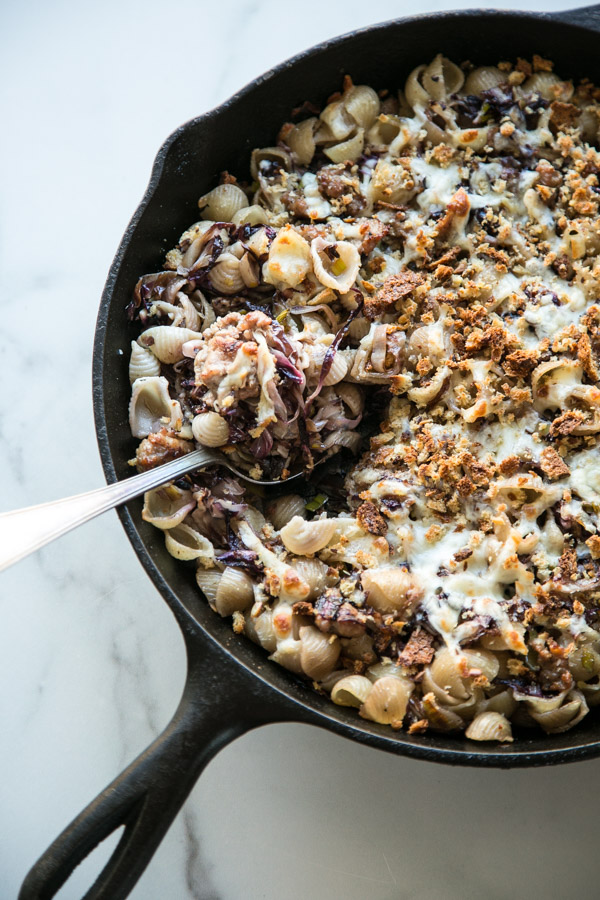 Chicories are bitter lettuces that are often the unsung heroes of the salad world. Radicchio and treviso add a gorgeous pop of purple color to your plate, while curly escarole and frisee offer plenty of nooks and crannies for your dressing to cling to. I have a salad in my book that is an ode to these lettuces, but my favorite part about them is how delicious they are cooked!

Especially since many people with digestive issues have trouble with raw salads, I love finding new ways to honor these ingredients in cooked dishes like this sausage pasta bake. 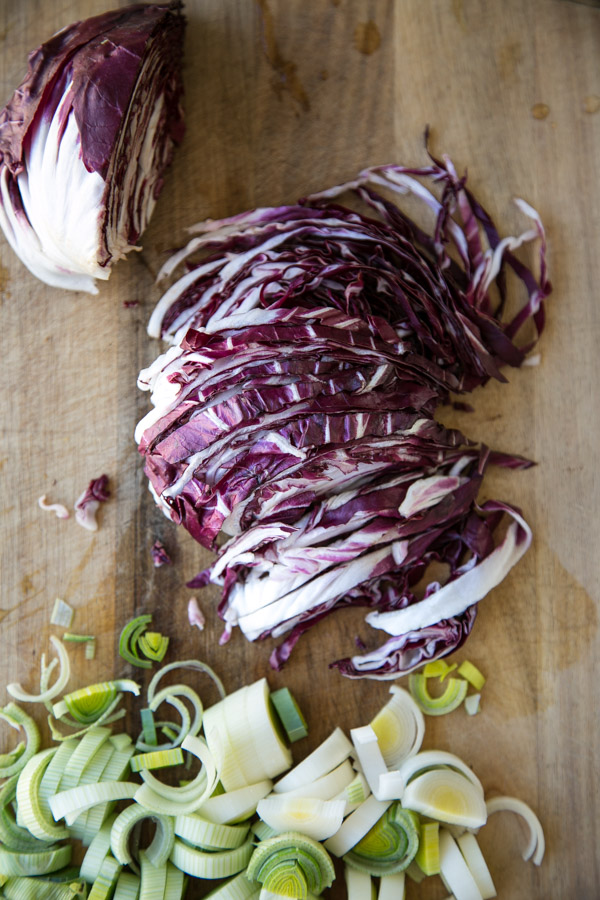 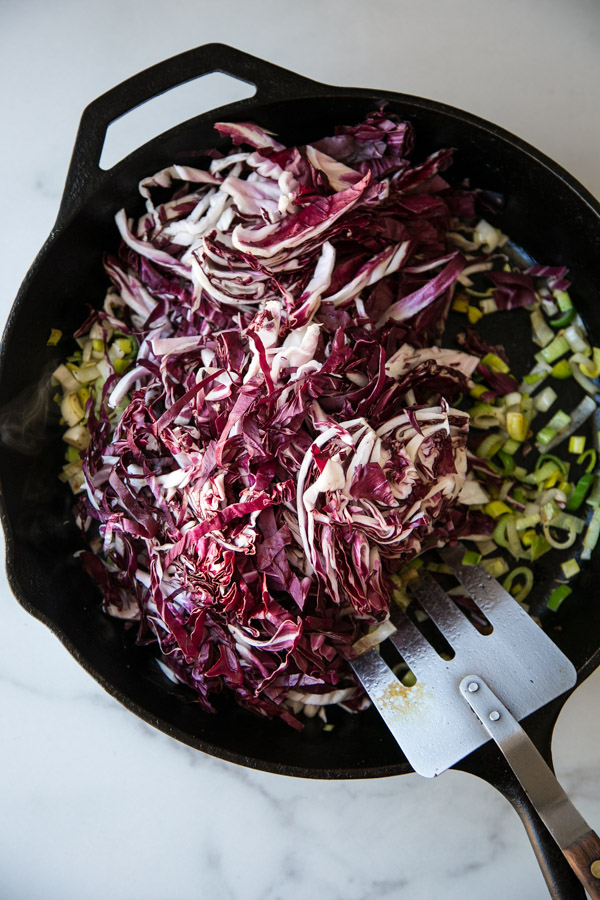 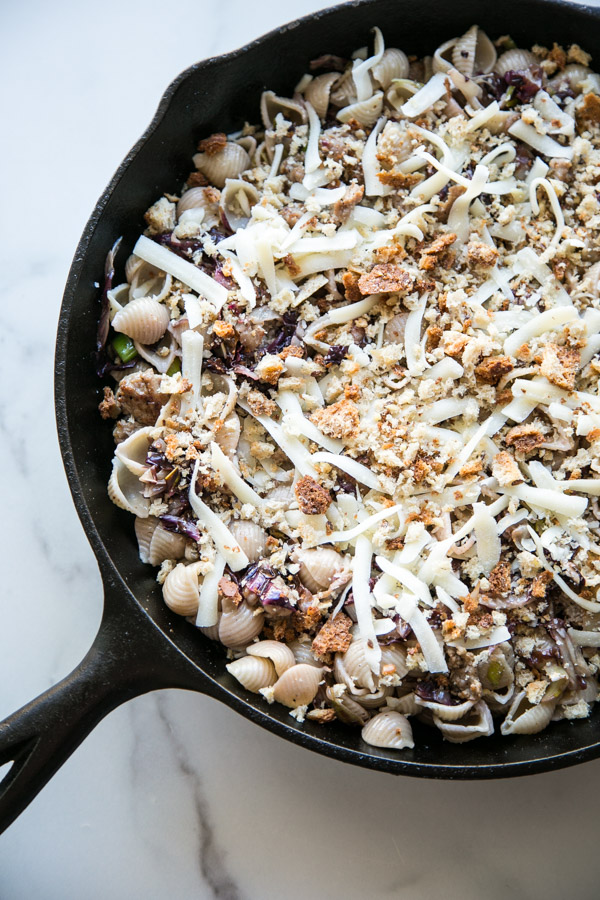 It is based on an old Italian recipe that I was obsessed with in my early twenties: rigatoni Treviso. If you’re an OG fan from my Big Girls, Small Kitchen days you might even recognize the recipe! The ingredients are simple: just onion, sausage, Treviso (which is a type of radicchio) and heavy cream. This type of combination is healthy hedonism incarnate. But for this version, I took it a step further to make it gluten-free, low-fodmap optional and mostly dairy-free (none of which were considerations in my early twenties!).

Since there are so few ingredients, I thought the dish would work well as a baked pasta with the added texture of crisped noodles and toasted breadcrumbs. I swapped coconut cream for the heavy cream and onion for leek. But if you’re open to a small (low FODMAP) quantity of shredded cheese on top, that of course tips the hedonism scales a little more. 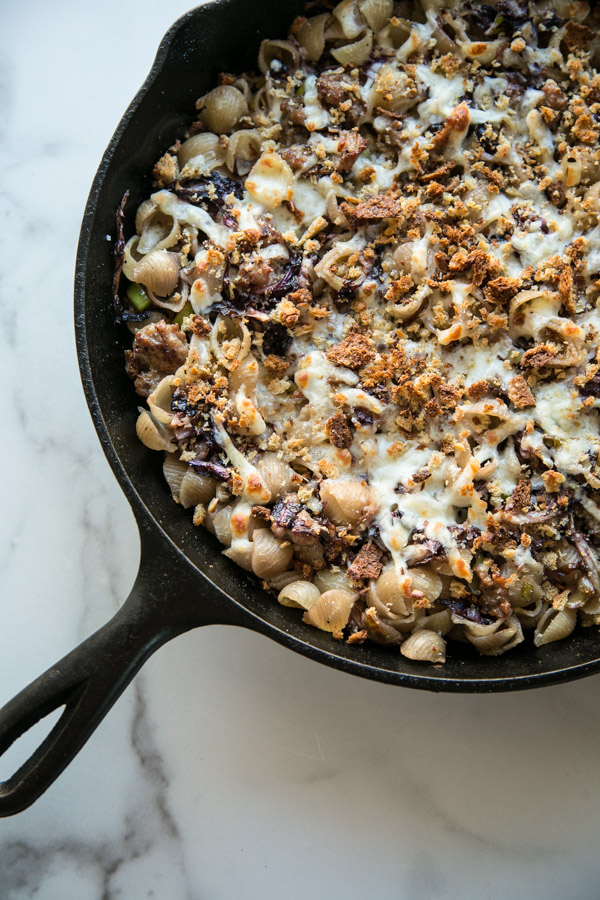 All low FODMAP folks just need to omit the leek or swap it for half a diced fennel bulb, and use homemade sausage. There’s a recipe in my book SIBO Made Simple for this. It’s really easy.

Though sausage is in the title, you can easily make this vegetarian or vegan. I will say though that the flavor combination of slightly bitter, wilted greens and salty, umami rich deli meats (I shall throw bacon, prosciutto and salami in as options, too)—doesn’t get more classic. 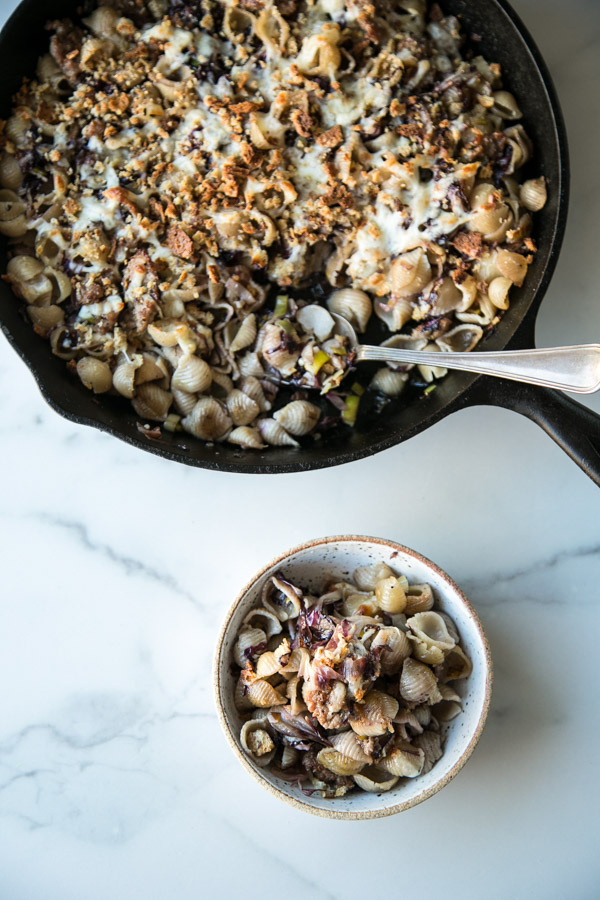 Read on for this gluten-free healthy veg-packed sausage pasta bake. And if you need any tips on the best noodles for the job, click here. And for tips on how to cook them, click here. 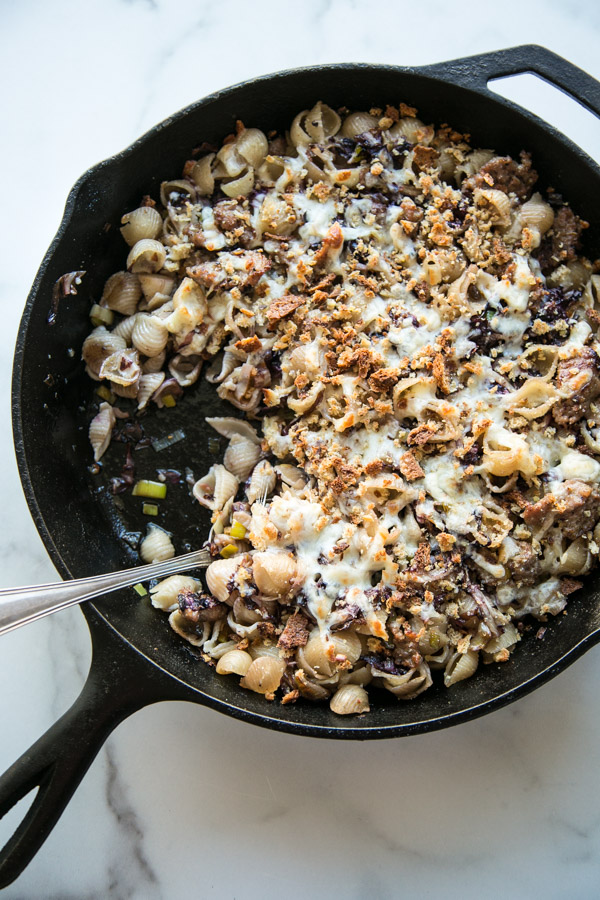 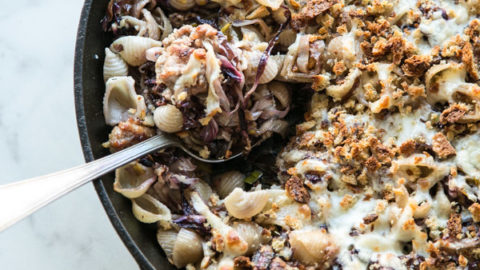 No ratings yet
print recipe
The star of the show in this sausage pasta bake is the bitter greens, which are actually purples: radicchio and endive. It’s based on an old Italian recipe that I was obsessed with in my early twenties: rigatoni Treviso. In this recipe, I turned it into a baked pasta and swapped coconut cream for the heavy cream. Though sausage is in the title, you can easily make this vegetarian or vegan. If going plant-based route, add ¼ teaspoon of red pepper flakes to make up for the sausage and feel free to substitute vegan cheese. Low FODMAP folks, omit the leek or swap it for half a diced fennel bulb. Omit the sausage unless homemade without garlic. There’s a recipe in my book SIBO Made Simple for this. It’s really easy.
Prep Time 10 minutes
Cook Time 25 minutes
Servings 4
Author Phoebe Lapine

If you make this, tag @phoebelapine and #feedmephoebe - I'd love to see it!
118 shares