This easy coconut rice pudding recipe is brought to you in partnership with my friends at USA Rice & TheFeedfeed. All opinions are my own (duh). Thank you for supporting the brands that make this site (and my savory desserts) possible! 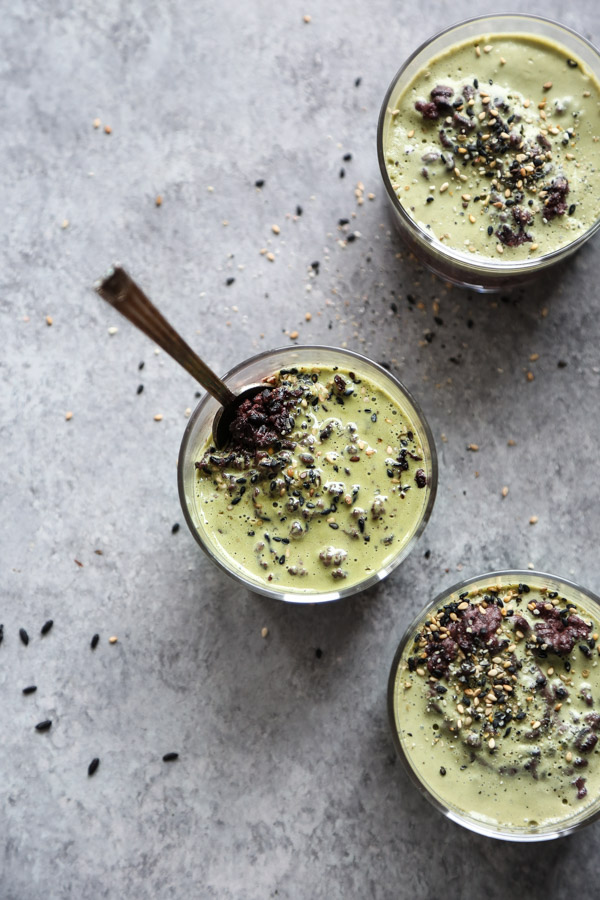 I first became obsessed with the concept of “rice as dessert” in Thailand.

You’ve heard about the low’s of this trip, which included sickness-induced fever dreams. But the high’s included non-sickness induced fever dreams of various Thai street food, which contained some of the most exciting and funky flavors my 16-year-old palette had ever encountered.

Before I left, I was a basic cupcake girl. When I came back, all I wanted was sweet sticky rice with mango in a banana leaf. 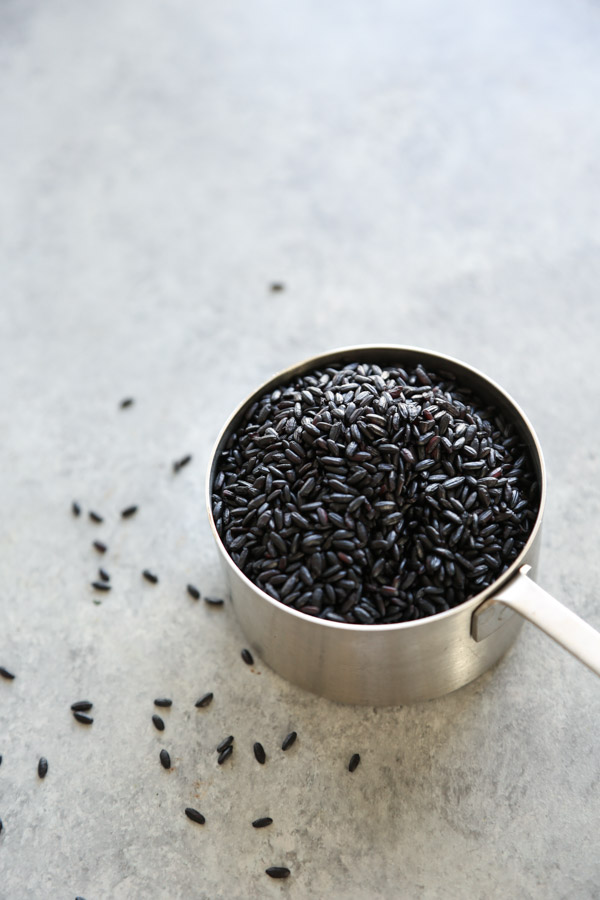 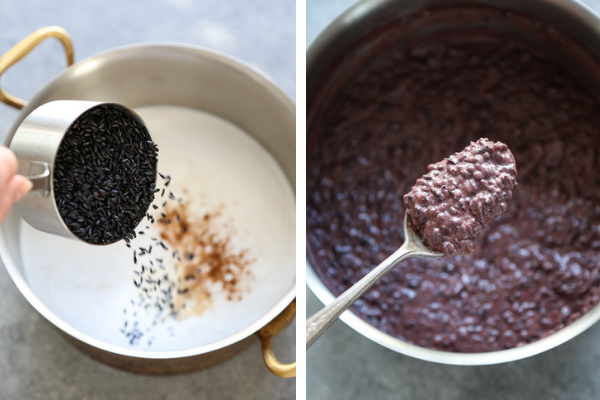 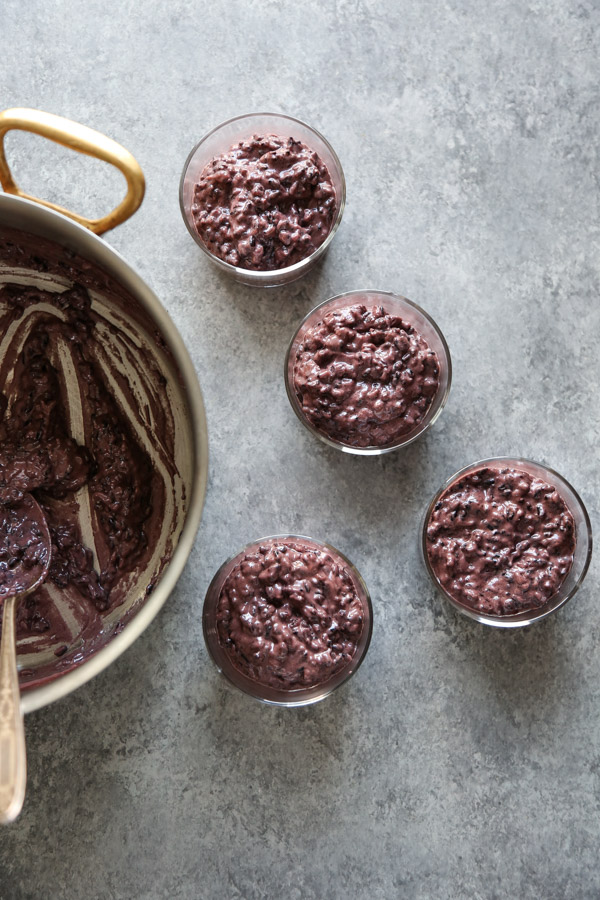 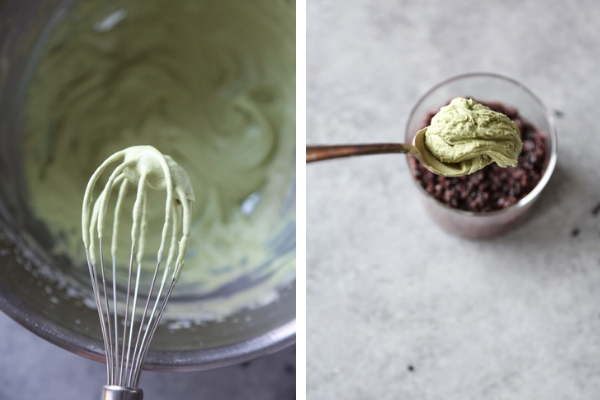 As you can imagine, such things in their most authentic form were hard to come by on the Upper West Side. So instead, I took to making my own riffs on rice-based desserts, including many variations of this coconut rice pudding recipe.

What Thai-inspired rice puddings have on their gloppy American cousins is that you can really taste the rice. People don’t usually think of rice as having its own fragrance, but depending on the variety, you can tease out a beautiful nuttiness, slight spice, or floral aroma.

I love using coconut milk in rice pudding both for the dairy-free factor, and also because it’s naturally thickening and compliments rice so well, especially this version with black rice. 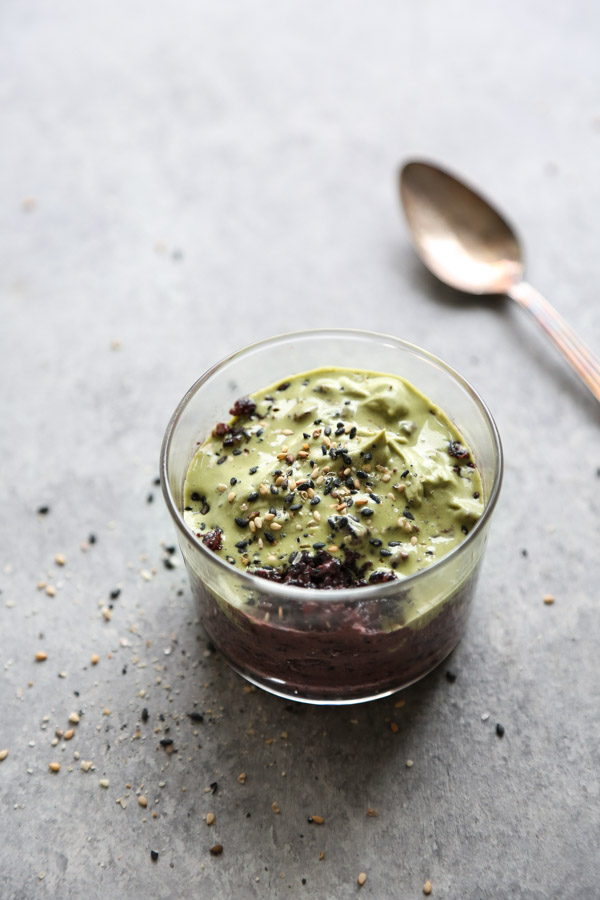 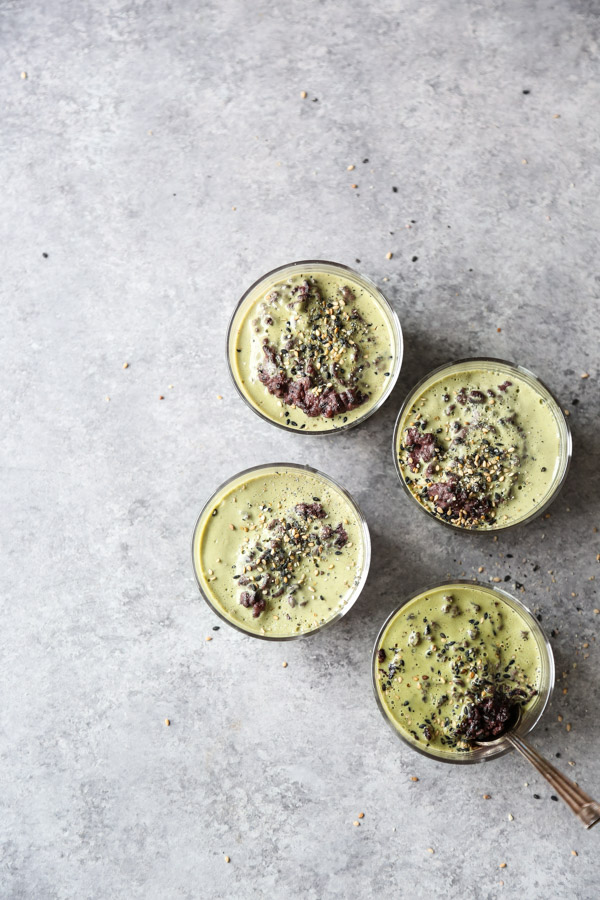 Black Japonica is an aromatic, 100% whole grain rice with a dark black bran (meaning, fiber for the win!). When cooked, the grains are slightly chewy with a subtle sweet spiciness. And in the case of this black sesame coconut rice pudding, it means the end product has wonderful texture while being incredibly creamy.

Did you know that a lot of black rice is actually grown right here in the US? If you’re curious where your rice comes from and want to try to source locally rather than overseas (which, with an eye towards sustainability, I always encourage), simply turn over the package and check for the USA Rice logo on the back or see where it was grown. 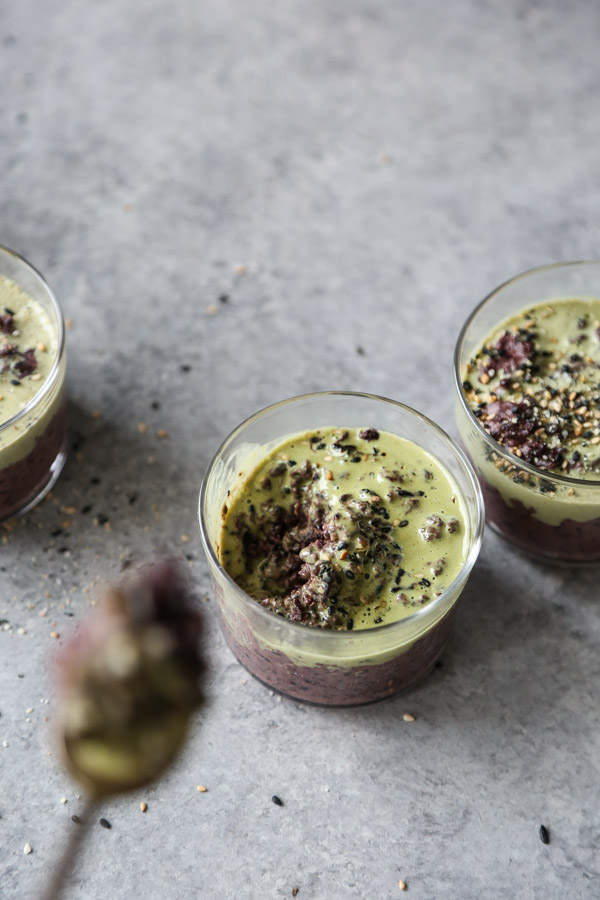 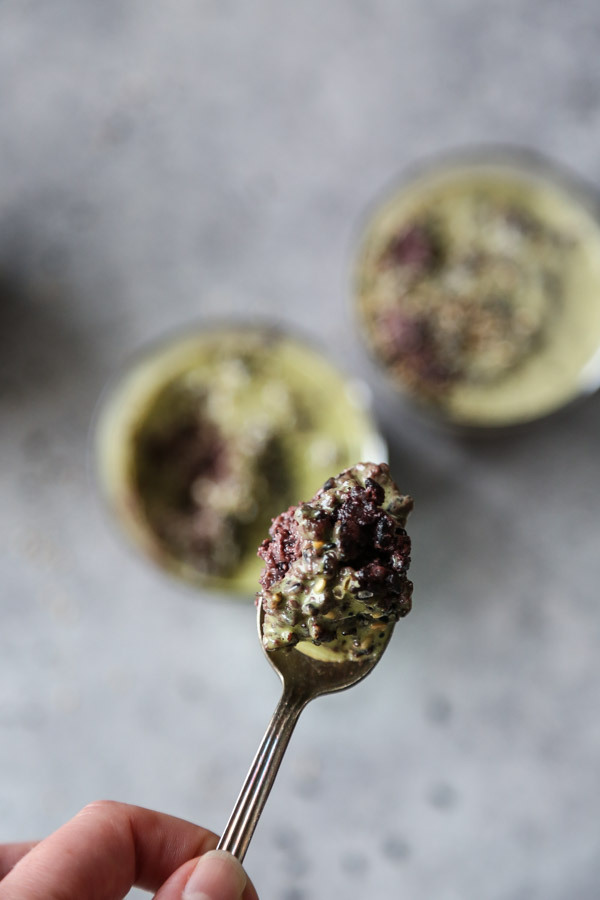 The last brilliant part about this recipe is the black sesame flavor. Okay, so this version might have taken a detour from Thailand and ended up in Japan…

Usually, when making the Japanese-inspired ice cream, you pulse a bunch of black sesame seeds in a food processor to create a paste and then mix it into the cream mixture. In the case of this black rice pudding, I use a little hack thanks to the actual color of the rice: instead of using black sesame seeds, I just added a few tablespoons of tahini to the pudding. This thickens it further and also saves you an appliance to clean. You still get the wonderful sesame flavor and nuttiness, but without the hassle.

Read on for this black sesame coconut rice pudding recipe with US-grown black japonica and a dollop of matcha cream on top. It’s a perfect spooky recipe for Halloween with far more fiber and less sugar than anything else on offer. 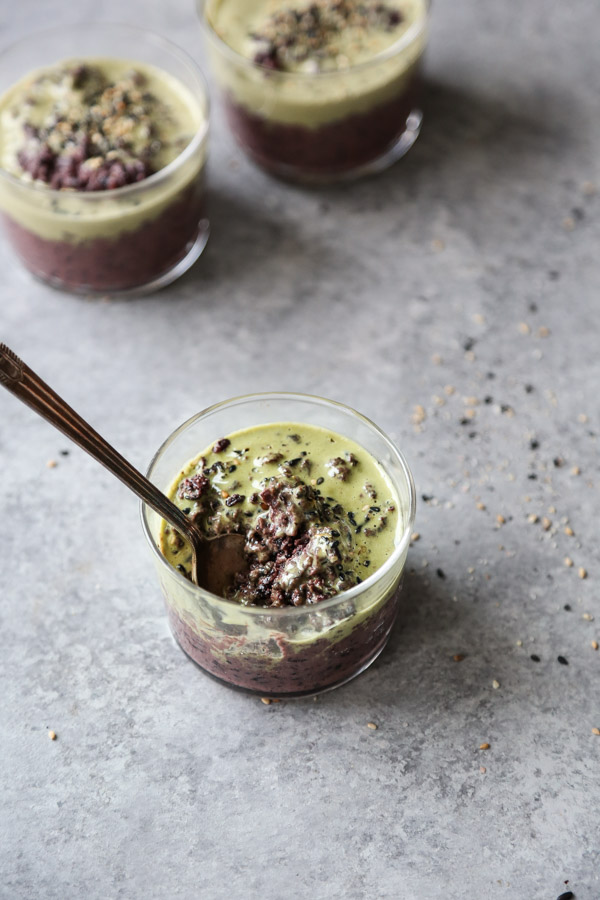 Please give me some creative ideas for what to call it in the comments section…my creativity has stalled on the word witch. 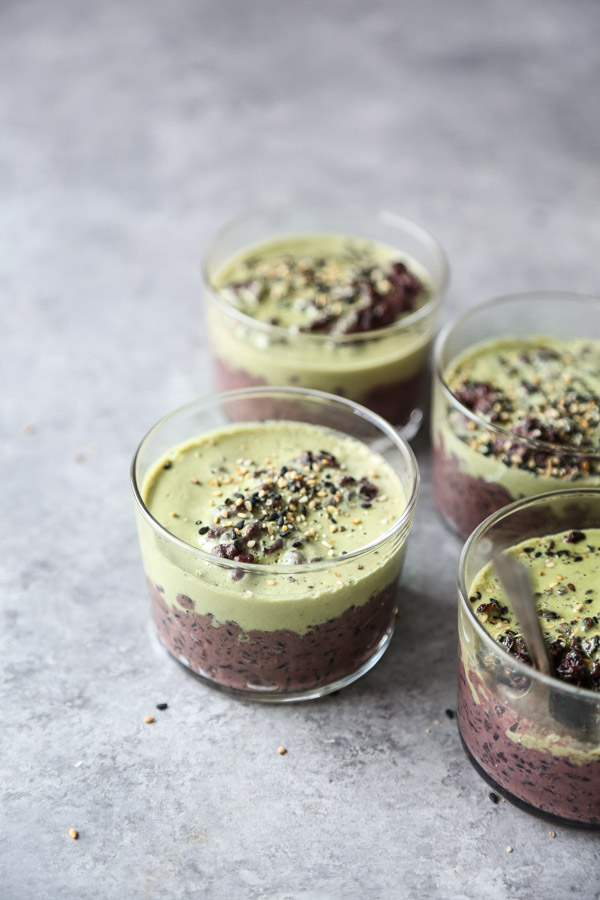 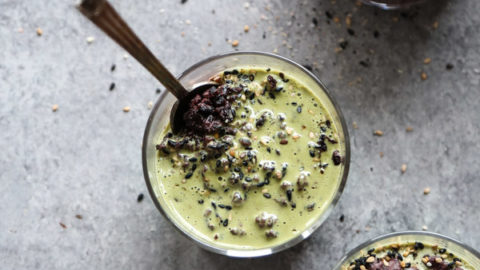 5 from 2 votes
print recipe
If you like a creamier pudding, I suggest enjoying this coconut milk rice pudding straight from the pot. But it also makes for an amazing make-ahead dessert recipe that’s elegant enough for company. You can serve the matcha cream on top so that it melts and then freeze or spoon it on right before serving. Either way, you get a beautiful contrast between the black rice and green matcha – a perfect palette and healthy sweet treat for Halloween!
Prep Time 10 minutes
Cook Time 25 minutes
Total Time 35 minutes
Servings 4
Author Phoebe Lapine

This easy coconut rice pudding recipe is brought to you in partnership with my friends at USA Rice & TheFeedfeed. All opinions are my own (duh). Thank you for supporting the brands that make this site (and my savory desserts) possible!