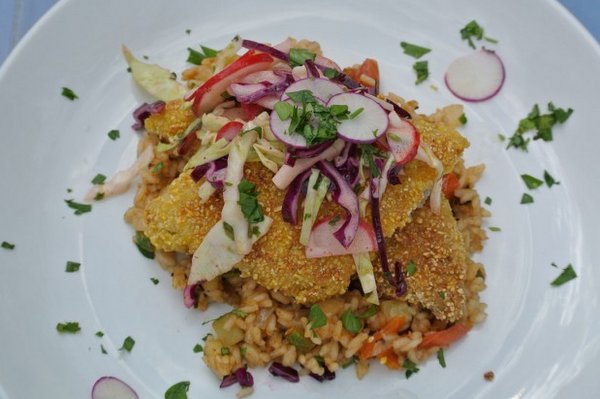 There’s a lot that needs rewriting from this past week’s Chef Race episode. Among them, Stan and my midpoint challenge cook-off against Caroline and Bianca, which they cut entirely. I am partially relieved because it means they cut Richard Corrigan telling me I should go learn how to use my knives. But it also means you missed us winning! (not that he ate his words or anything).

I’ll have all the behind-the-scenes dirt for you, as always, in my upcoming recap of the show. In the meantime, I wanted to share our winning recipe from that checkpoint in Little Rock. The challenge was catfish and rice, and for anyone who’s ever tried to make rice on a grill, you know it ain’t no picnic. Especially when the Mississippi is right behind you blowing humid gusts of ash in your face.

If you’re making this at home, I would recommend sauteing the rice with the tomato-zucchini mixture and making it like a pilaf. Since we only had limited time to prep and cook, we got the rice started separately in a second pot and stirred it into the vegetables once cooked.

Check out scenes from next week’s episode, in which we get to design our own BBQ sauce, and I get to break out my corporate product development and marketing skills from my former life.

Stay tuned for my episode 5 recap, and eat up! 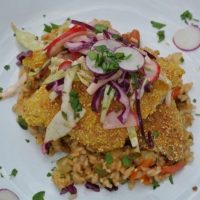