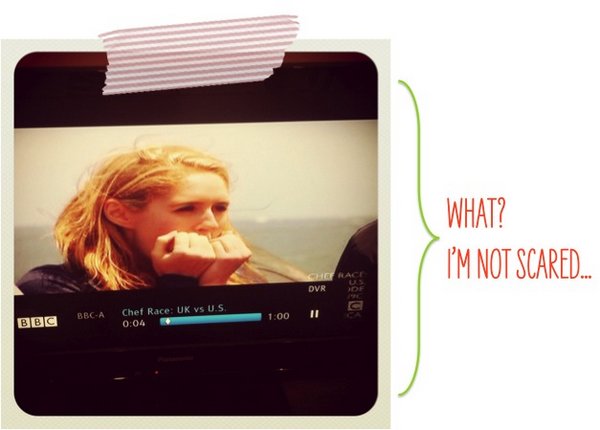 Contrary to that reaction shot above, which appeared on screen during the first few minute’s of Tuesday’s premiere, I was not at all surprised by the fact that we were starting in LA with no money, no food, and no prospect of a bed at the end of the night. It was probably the 5th take, somewhere after our team swagger shots and the helicopter aerials, and somewhere before we broke for lunch, our last meal.

But that doesn’t mean I wasn’t nervous. Anyone who caught my “squeeze an onion” comment could tell I was peeing my proverbial pants (especially when Richard Corrigan, and his Havana nights linens, were around). After a 5am wake-up and 6 hours of filming, Claire and Richard finally released us out into the world – for real. Clearly I wasn’t used to running with a backpack on, but I appeared to be in a lot better shape than the camera guys and sound men who kept sprinting in front of us and trying to run backwards.

Having been stuck in a hotel in Santa Monica, unable to leave our rooms for 5 days, everyone was pretty prepped and ready with their big idea for how we were going to make our first bit of money. I still think mine was brilliant: go to UCLA and set up shop at a frat and/or sorority house and throw a cocktail party/rager ($15 a head, 100+ people. BOOM!). But being the youngest, no one really listened to me. Where we ended up wasn’t a far cry from this idea – just on a slightly smaller scale. The first kind souls to take us in off the street were former sorority girls Micall and Brooke, followed by former frat boy (and Brody look-a-like) Mike. 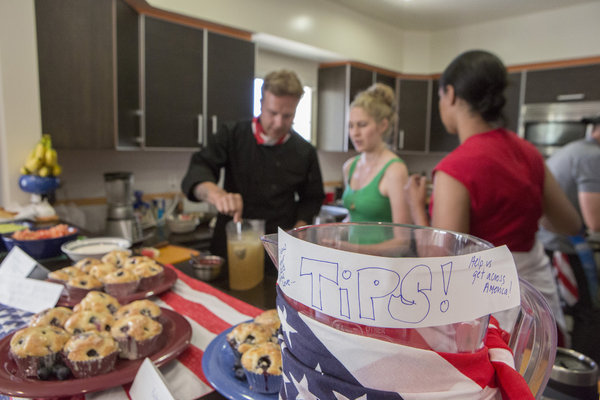 One nice thing about shacking up with people who were 1 year out of college was that we were taking tequila shots with them only two hours after being stranding on the pier. One not so nice thing was the pervasive stench of stale beer, and that shortly after getting into our sleeping bags in “big daddy’s” room, Mike’s friends arrived with a beer pong table and started blasting Kanye. Bianca said it wasn’t the noise that woke her, but the overwhelming smell of Abercrombie cologne. 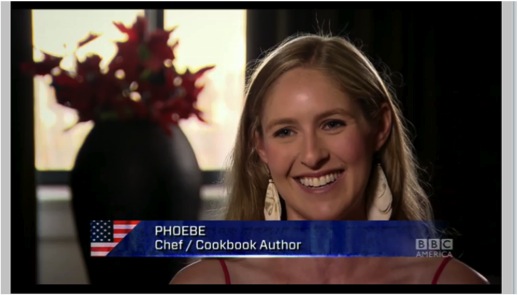 The thing that shocked me the most about watching the show was how much they cut. I’m not just talking conversations and smack talking here and there – they literally cut 48 hours of what we went through. Within the first 24 hours, our half of Team USA had already cooked 3 meals. There was taco night, brunch the next day, and then the family meal in the Palisades that I mentioned here. We stayed the night in a dank sketchy motel right outside Calico, and then the next day was the challenge and sushi dinner.

I won’t go into detail on the sushi in the bathroom. You were able to watch most of what happened, and should therefore understand that Kiko, her grandpa, and the rest of her family were pretty much the cutest nicest people ever. But perhaps the best part for us, after toiling away for 3 days, was that they gave us their suite to stay in that night. It was my first time in Vegas, and I think it’s safe to assume that if I return, there is no way I will ever stay in a place that nice. Needless to say, tired or not, we locked our loot in the safe and went to take advantage of the free casino drinks.

My friend Sophie gave me the nickname Blanche Dubois the first time we traveled together because of how genuinely I believed in the kindness of strangers. I certainly went into Chef Race with this mantra. BBC America can scoff all they like (they gave me the tagline “charming her way to the top”). But our first 4 days crossing America really proved my point. The code word for the people who helped us along the way was “angel.” Brooke, Mical, Mike, Trevor, Kiko and her family, were the first of many angels who came into our lives on Chef Race. And I can tell you honestly, cameras or no cameras, reality television be damned, their generosity was real.

Tune in tomorrow for my take on episode two – it was a doozy for Team USA. Check below to see if you were the winner of my Red, White, and Blue giveaway. Lastly, don’t forget to watch next week, Tuesday at 10pm on BBC America, as we battle the Colorado wilderness! Some of us didn’t fare so well…and some of us looked fabulous.