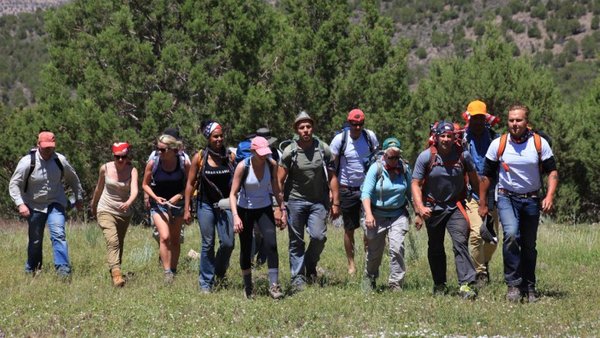 I was pretty nervous to watch last week’s episode. Mainly because it was the first (of many) times I broke my cardinal rule of reality television participation: I cried. But it turned out I had nothing to worry about, because like the first two episodes, they reordered the timeline and conveniently passed over the parts when I was dying on the side of a mountain.

I’m not sure why the producers starved us in the first place if they weren’t even going to reap the benefits of the drama that unfolded. But I guess they quickly reached their quota in this episode when a 37-year-old man (child) called a 19-year-old girl a “see you next Tuesday” to compensate for the size of his fishing rod. 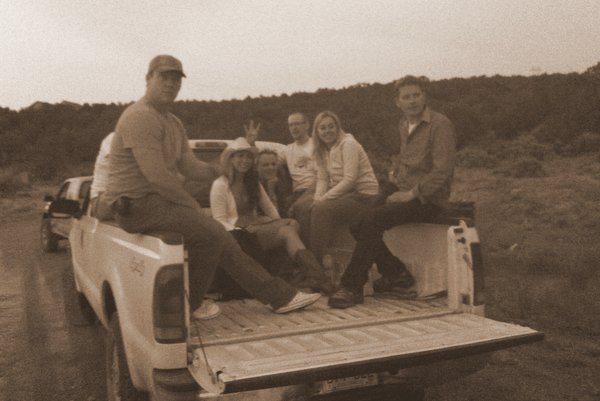 our ride to the lodge 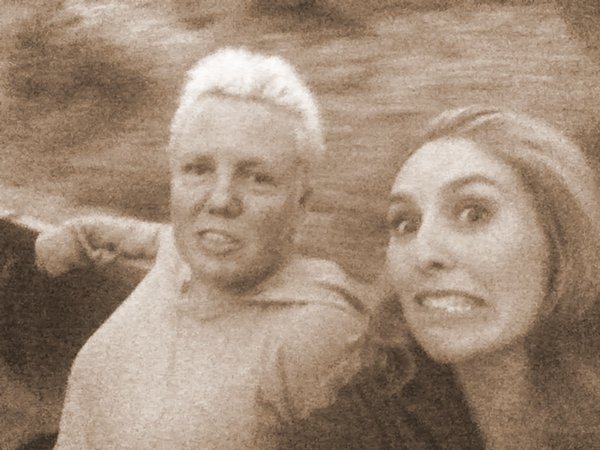 pippa in the pick-up 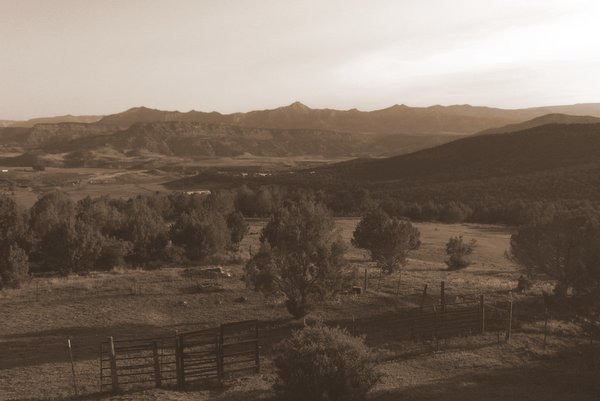 view from the lodge 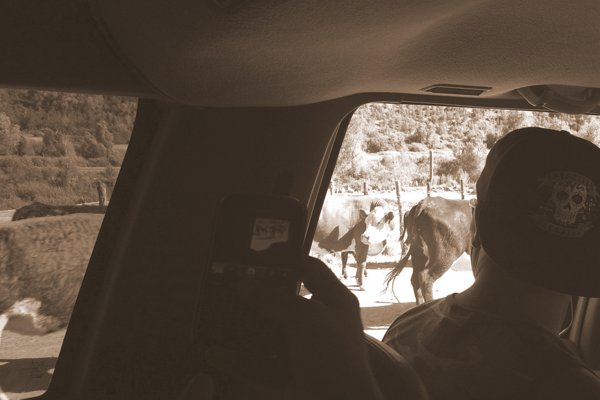 So, let me break it down for you…

We had a few days in Grand Mesa to prepare for the upcoming challenge – which means, for once, I actually have some iPhone pics of what we did! Mainly, we learned how to turn the safety on and off of our guns, and not to point them at each other. Our guides for the weekend were good old-fashioned hillbillies, and we had a wonderful time scooting back and forth from the lodge to the firing range to the general store, where our hunting licenses were issued and blazing orange paraphernalia was purchased, in the back of their Ford Broncos. We got caught in several traffic jams as various cowboys decided to relocate their herds. I got very excited that there might be some horses involved in this leg. But as per usual, we were responsible for getting from point A to B on our own two feet. 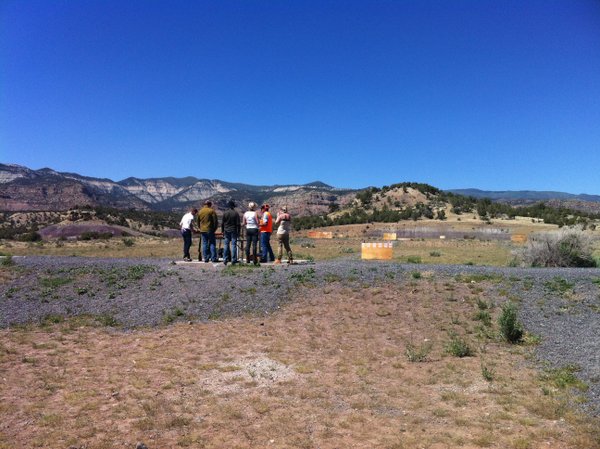 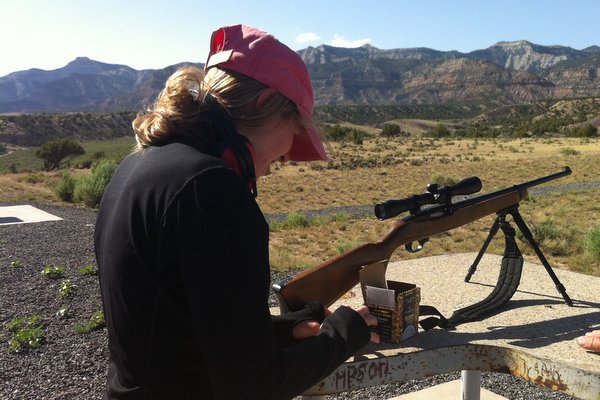 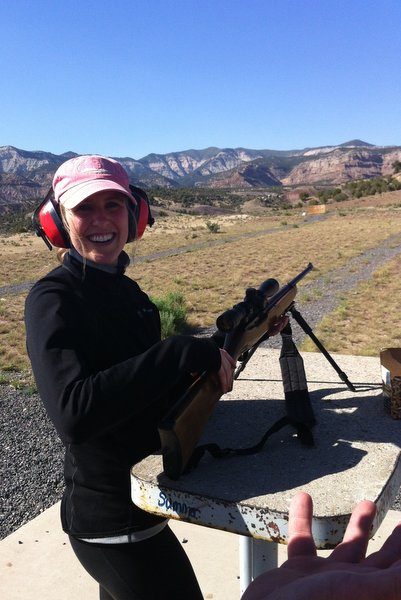 We started the challenge at 7am in the mountains above Grand Mesa. I don’t know if you remember the forest fires that were popping up all over the west this summer, but suffice it to say, it was unseasonably hot and dry – 100 degrees at 10,000 feet to be exact. Contrary to the edit, we started with the foraging leg and had 4 hours to hike to another mountain and collect as many edibles as possible along the way. We were each assigned a forager, and our team got Cattail Bob, who may or may not have just requested me as a friend on facebook (1 of 58, baby!). I went on a little Central Park excursion with Wildman Steve Brill before I left for Chef Race, so I was pretty excited about this part of the challenge (though still unsure why it’s industry standard for foragers to give themselves super hero names). 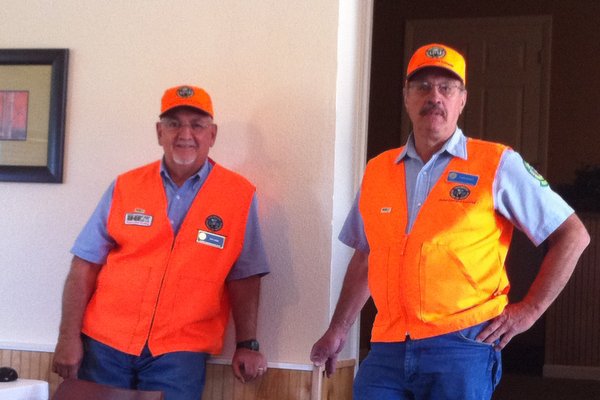 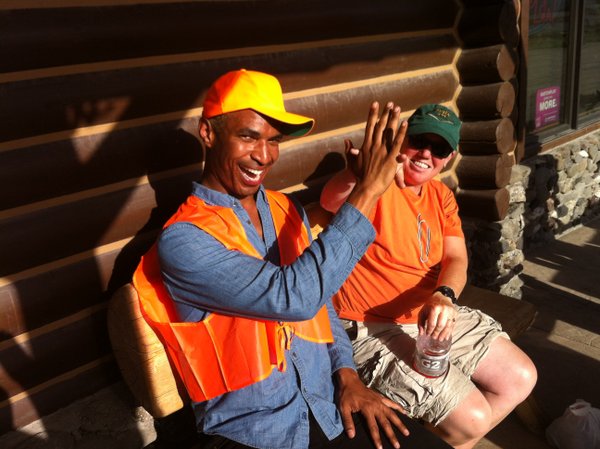 To make sure that Cody didn’t cheat by stealing the Brit’s burdock root, and that Johnny didn’t put stinging nettles in our sleeping bags, the guides lead our teams on different paths. The Brit’s path was longer and flatter, and after what could only be assumed were a few wrong turns by Rooster (real, given name), whose nalogene bottle was presumably filled with whiskey, ours lead directly down the face of the mountain. Needless to say, there wasn’t a whole lot of foraging that could be done as we scaled the rock face on all fours. And there wasn’t a whole lot of footage to be had from the adventure, since the cameramen were trying not to die too. But back to my own small death… 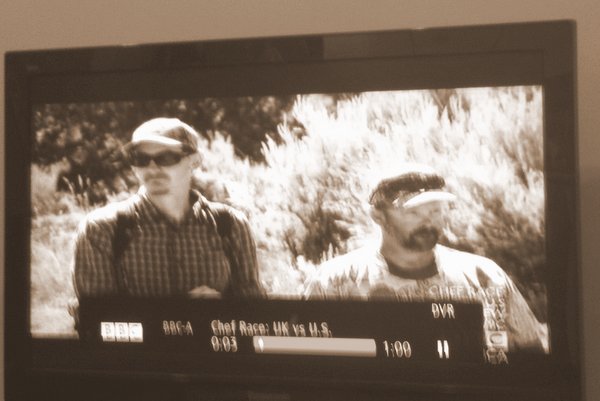 I drank all the water my nalogene afforded me during the first hour of the hike. By the time we reached our destination at 3pm, I was feeling too funny to participate in arguing with the producers over the unfairness of it all. When we finally reached camp at 7pm, I was positively woozy. Even though I hadn’t eaten anything since 6am, I could barely stomach a full cup of rice and beans, the only food they gave us to cook with. As my team was cleaning up, I decided to take five and go sit on a log looking out over the horizon. The trees were dancing strangely.

Ronaldo, displaying both Latin lover and marine-like qualities, came over, took one look at me, and said: mommy, your pupils are crazy dilated and you’re shaking. I’m calling the guides. After a few unsuccessful attempts to take my blood pressure with a Velcro band that hadn’t been used since 1992, they deemed my vitals “normal,” which was clearly not the case. Regardless, I insisted on staying at camp for the night. 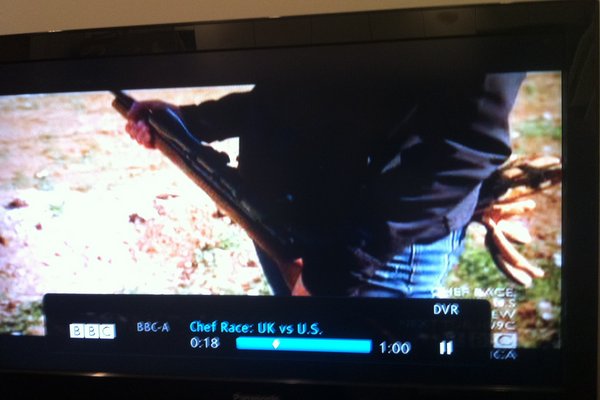 We were up again at 6am, and half the group went fishing, the other half hunting. I peed for the first time in 24 hours, so I took that as a positive sign and went off in the gun group with Ronaldo and Don. We were a little confused when we pulled up to someone’s house. The blind was set-up in the backyard, and we found out that we were hunting prairie dogs, the rats of the west. They looked freakishly like my pet guinea pig, Piglet. But once Ronaldo had shot 2 and brought them back to field dress, I got over that. They had weird nipples, and were pretty uncute. 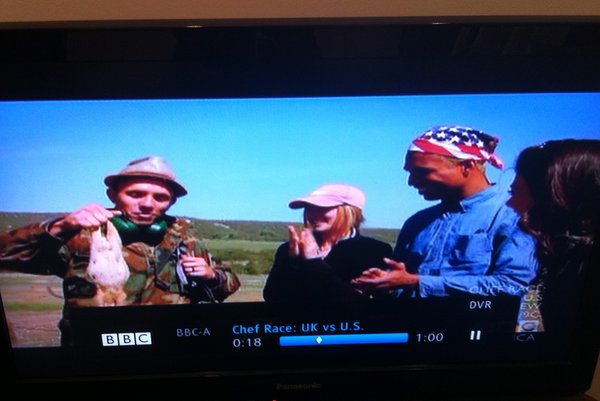 Don and I managed to wound a few, but we didn’t make the kill. Hold your horses, PETA. Before you start feeling bad for the prairie dogs, get this: they’re cannibals. They won’t kill their own, but if one of their fellow dawgs is injured, they zealously drag him back down in the hole and have themselves a feast. That night, dinner was on us.

At some point during the field dressing of the second dog, I got dizzy and nauseous again. The guides assumed I was just queasy at the site of the guts. Puhlease. Don’t insult me. It was past noon at this point, and yet again, we hadn’t been given anything to eat all day. I kept asking the producers for Gatorade, and thought they might oblige considering I had just been incredibly dehydrated and heat exhausted the night before. No dice.

Finally my body had had enough, and I keeled over on the side of the mountain and started vomiting water and stomach bile. That got their attention. I was promptly removed from the situation and brought to the lodge, where I slept under a hypothermia blanket for 22 hours on a couch. They woke me up periodically to interview me, on camera, and so that the producer could ask me for the third time if there was a possibility that I could be pregnant. They’d starved us for two days, given us no electrolytes, and then forced us to hike through the wilderness at a crazy high altitude. But yeah, it must be my sluttiness finally catching up with me. 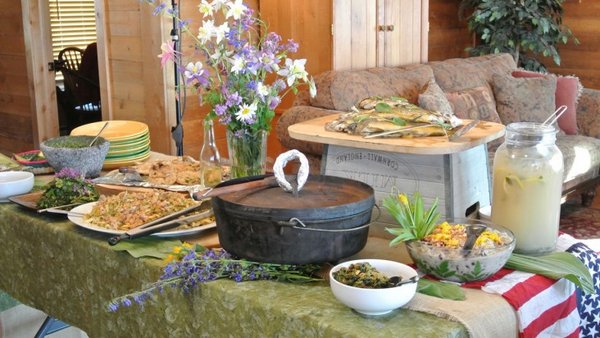 By the next day I had bounced back enough to help with the buffet. I made condiments for the fish with some of the wild edibles, and Don and I prepped all the other foraged greens and presented the meal. I look pretty Katie Holmes-y (i.e. dead in the eyes). So thank goodness we won. I would not have fared well with that pheasant. 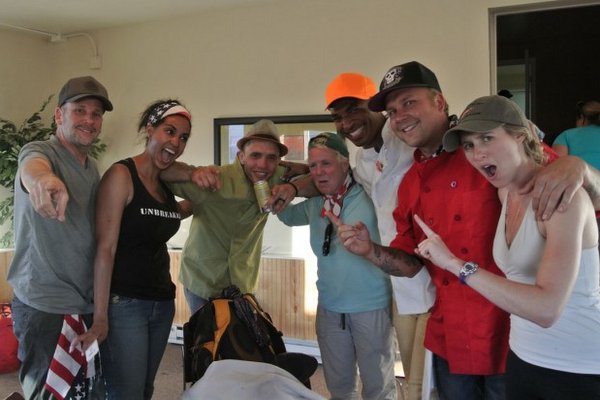 I guess the guys on my team didn’t have the same personal rules as I did, because Ronaldo, Stan, and Cody cried like little babies when we won, while Don, Bianca, Pippa, and myself – the women – looked on in confusion. 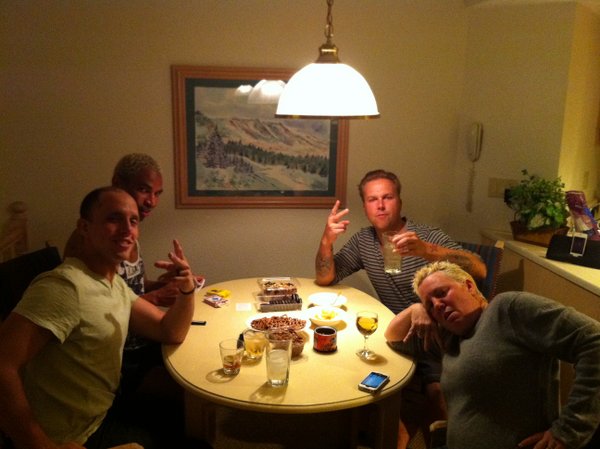 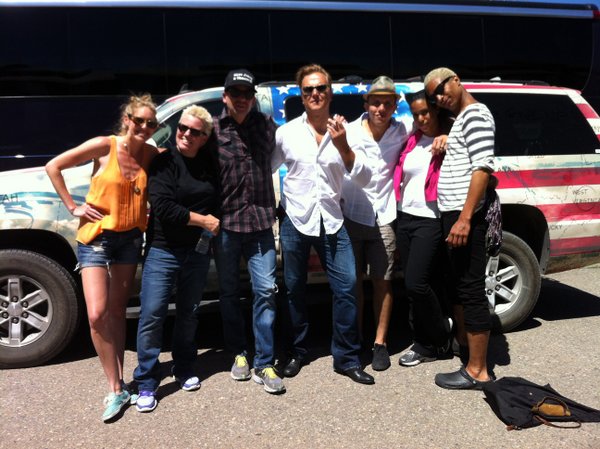 our team with our wrapped vehicle. i have clearly lost 10 pounds.

All in all, even though I missed a good portion of the activities, it was a pretty good team bonding experience, as camping tends to be. We’ll see if the kumbaya holds up on this week’s episode, as we travel to Kansas and get the heck out of Dodge! 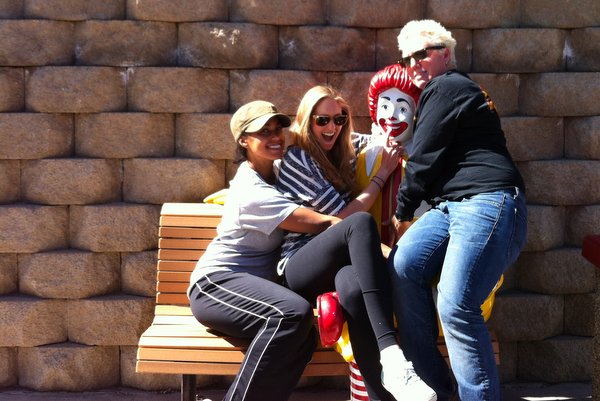 We had a 13-hour bus ride from Grand Mesa to the plains, and things got hot and heavy. See above.