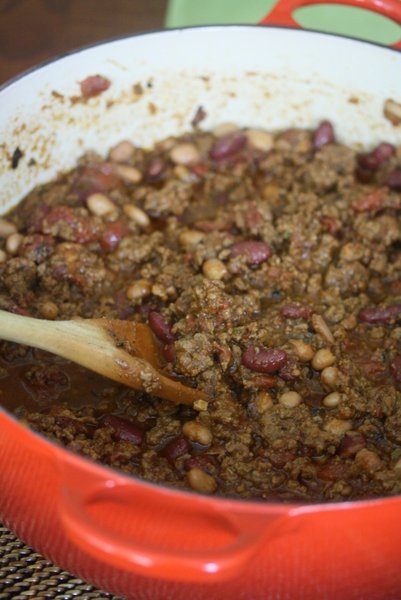 Leading up to the premiere of Chef Race on October 2nd, I’ll be introducing you to all my fellow chefs from Team USA and sharing some of their special “all-American” recipes. As we learned from our crazy travels across the country, American cuisine can be just about anything. Fried Twinkies anyone? So hopefully these recipes will be one way of getting to know these colorful characters a little better.

First up is my pal from the dirty Jerz, Ronaldo Linares. This man has a lot of love to share. He talks a lot – and sometimes you can just make out what he’s saying. Either way, he always makes me laugh. Watch his British accent impression, and you will too.

But onto the serious stuff…

Ronaldo is CEO of Ronaldo’s Cocina and executive chef of Martino’s Cuban Restaurant. After his family moved to the United States in his early teens, Ronaldo, at age 12, got his first real experience in preparing a meal. It was a school project and he was supposed to make Jambalaya! It was such a tasty success and he realized he was good at it. He enjoyed the creativity of blending different tastes together to create an amazing mouthwatering experience that filled people with pleasure.

He also served as a sergeant in the U.S. Marines Corps where he was a Food Service Specialist responsible for feeding 6,000 men and managed a kitchen staff of ten. During his military service, he learned more about American food and began to infuse Cuban flavors into American dishes to create a truly unique experience.

Ronaldo’s creativity, passion, and Cuban heritage are at the heart of his cooking – and I’m very excited to share with you his recipe for Picadillo, Cuban-inspired ground beef. Read on for the recipe, the story behind it, and a whole lotta extra flavor from my favorite Fedora-wearing chef.

Also, don’t forget to set your DVR’s for October 2nd, and make sure you tune into Feed Me Phoebe as well. I’ll be hosting a virtual viewing potluck party with a bunch of bloggers from around the web (on this side of the pond). Everyone will be posting their own all-American recipes, and I’ll be giving away a bundle of Red, White, and Blue items from Le Creuset, Edgeware, and Dream Farm.

This recipe is dear to my heart because it’s one of the first dishes that my father taught me, and now I’ve made it my own. How does this tie in with an all-American potluck? Well here is the story: Being 1st generation American, coming from Colombia and having a father that’s Cuban, I was exposed to a different type of cuisine than your traditional American food. During my youth, instead of Burger King, Pizza Hut, or frozen food from the super market aisle that you hated because it was too cold (remember?!), my trips consisted of going to the farmer’s market, picking through the season’s harvest with my mom, going to the butcher, and then spending a long afternoon in the kitchen. We ended up with dishes like a Pollo Gizado (Stewed Chicken/Root vegetables), lots of Arepas (Colombian style corn tortilla), Oxtail soup, and my favorite Picadillo, Cuban-style ground beef. This is our version of traditional Sloppy Joe or taco filling but with a whole different flavor profile. The one thing I love about America – and the reason I love Cuba+/Colombia so much – is it’s a big melting pot of amazing foods. So here’s my All-American recipe with a handful of Cuban-inspired, passion-infused flavors. For more, visit Ronaldo’s Cocina.

1. Pre-heat a large skillet over a medium-high flame for about 10 minutes. Once hot, add about 2 tbsp. of olive oil.

2. Add your meat and season with salt, pepper, and cumin, along with the Spanish paprika and oregano. Cook until the ground beef is browned and cooked through. Set aside and take some of the fat out that rises to the top.

3. In a large sauté pan add olive oil, onions, roasted red pepper, green pepper, Spanish olives, and raisins. Once your “sofrito” is translucent add the tomato paste and sauté for 5 minutes. Add red wine reduce for 5 minutes then turn the heat down to medium-low and cook for about 10 minutes. This is the time where you bring your Picadillo together.

4. Transfer your sofrito to the skillet with the meat mixture, and return the heat to medium. Now is time to add your crushed tomatoes and chicken stock to the picadillo, simmer for an additional 10-15 minutes till all the flavors have married and serve.

Ronaldo’s tip: Remember to season everytime you add a new layer to your dish this way the spices have time to develop.