I have opened my next unofficial business: Phoebe’s Cozy Casserole Kitchen. It is a free subscription service that currently only has one customer, my friend who recently broke her hip.

For the first two installments, I reached into my usual bag of tricks, beginning with this Provencal Chicken and Rice Casserole—a perpetual crowd pleaser—and following it up with Not-Your-Grandmother’s Tuna Noodle Casserole.

Since both were such slam dunks, I knew I had to follow them up with something extra special. I thought of dipping back into the archives and resurrecting this coconut-y Thai chicken casserole inspired by Tom Kha Gai soup. But that’s when the creative inspiration struck: what if I did a similar combination of Thai ingredients—coconut milk, fish sauce, lime juice, chiles—but also layered in some peanut butter to make the rice taste like it was cooked in satay sauce.

And that, my friends, is how this Chicken Satay Casserole was born. It might just be my masterpiece.

First, let’s acclimate ourselves regionally before we bring Southeast Asia to the Midwest.

Satay (or Sate, depending on where you are) is a ubiquitous street food in Southeast Asia, particularly Indonesia (where it is said to have originated), Malaysia, Philippines, Singapore and Thailand. It usually consists of sliced or cubed meat strung onto skewers, marinated in spices, particularly turmeric to give it a signature yellow hue, and served with pickled relish and/or peanut sauce.

Obviously, we have deconstructed the concept of a satay for this casserole, eliminating the skewers altogether and using the Thai-style peanut sauce not for dipping, but as a whole creamy layer to slather your chicken in.

Though marinating the chicken in a mixture of ground turmeric, ginger, coriander and lime juice, might seem like an unnecessary extra step—and certainly one I’m used to skipping when making a dump and stir casserole—it’s really worth it if you’re used to the rich flavor of the meat that you get when ordering satay at a restaurant.

The ingredient list might seem long, but it’s all pantry staples that just get whisked together and thrown into a baking dish. Don’t skimp on the crunchy cucumbers as garnish. Along with some fresh herbs (cilantro if you have any around) or green scallions, they help cut the richness of the peanut butter broth. You can even toss them together with some rice vinegar to create a quick pickle.

This recipe can also easily be made low FODMAP if you follow the notes below.

For more gluten-free casserole recipes, check out these:

And if chicken isn’t your thing, try this baked shrimp casserole recipe or this massaman-style beef and rice casserole!

If you’re looking for a make ahead crowd-pleaser that’s just as easy as takeout, this chicken satay casserole is your ticket. Unfortunately, you will be stuck making it yourself until Phoebe’s Cozy Casserole Kitchen gets scaled beyond just one non-paying costumer. 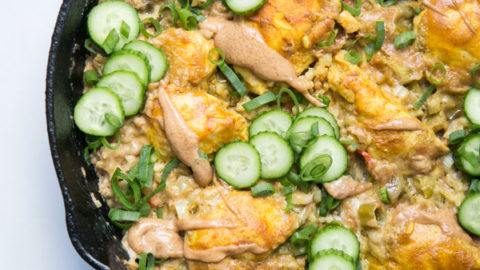 4.75 from 4 votes
print recipe
This may seem like A LOT of ingredients, but I promise you there much overlap and it’s just as easy to throw together as any chicken and rice casserole. The marinade is a play on Thai chicken satay, which is usually barbequed over a hot grill, but in this case, gets browned on top of the rice in the oven. It’s usually served with a Thai peanut sauce, which in this case infuses the creamy coconut broth that the rice, scallions and chiles are cooked in. To make this Low FODMAP, simply reduce the coconut milk to 1 cup and increase the water or low FODMAP chicken stock by 1 cup, use only green parts of the scallion, and omit the sriracha.
Prep Time 15 minutes
Cook Time 45 minutes
Servings 4
Author Phoebe Lapine

If you make this, tag @phoebelapine and #feedmephoebe – I’d love to see it!
282 shares