During my youth, I had a tendency to eat the same thing for lunch every day. Around the age of 6, I went through a tuna salad sandwich phase. And being the demanding creature of habit that I was, I would shame my mother into making one for my brown bag morning after morning until, three months later, I OD-ed and never wanted to see or smell tuna fish ever again. (Probably much to the relief of my Kindergarden classmates. That shiz is invasive.)

The same thing happened with Nutella and Peanut Butter Sandwiches, then Turkey and Salami. And eventually, by my college years, when I had retired every weird sandwich combination in rotation, I even ruined Asian Chicken Salad for myself.

The summer going into my Senior year, I spent three months living in Los Angeles doing an internship at Sony Pictures. Like most menial under-paid jobs in creative industries, my day to day was a lot less glamorous than it sounds. My position in the “Photo Production Department” involved “organizing” film stills by dragging them between folders on my desktop, and permanently deleting the ones that certain ultra paranoid image-conscious celebrities deemed unusable (cough cough Daniel Craig).

Though looking through photo after photo of Bond girls and villains caught in the unflattering cross-fires of a candid camera lens did have its perks, the best part of my summer job—in addition to getting to sample the Cheez Whiz fountain at the Talladega Nights premiere—was getting to order in lunch everyday from the lot cafeteria, which was catered by the emperor of Southern California cuisine, Wolfgang Puck.

Not everyone might have been as enthusiastic about getting paid in crunchy wontons and Napa cabbage, but to me, the daily Chinois Chicken Salad delivered to my desk felt like I was living in the lap of luxury. (Perhaps an early sign that I should have been organizing photos of lettuce not Liv Tyler for living). This was before the Wolf started expanding his franchise to airports and selling said salad in grab-n-go kiosks across America, so the menu item felt worlds classier than the CPK BBQ Chicken Chopped Salad I would have otherwise consumed on my own dime. And true to my old form, I proceeded to eat this Chinois Chicken Salad Every. Single. Day.

By the end of that summer, I never wanted to look at another crispy wonton garnish ever again. And though now, ten years later, I’ve recovered enough to return to Asian Chicken Salads, I’m slightly relieved that I couldn’t eat a glutinous wonton topping even if I wanted to.

This new and improved weekday lunch found its way into my kitchen via Andie Mitchell’s beautiful new book Eating in the Middle. I’ve been waiting with much anticipation for the Amazon fairies to deliver this new addition to my cookbook collection—and my growing Andie Mitchell collection. I picked up her first book, the bestselling memoir It Was Me All Along, as a much needed pleasure read in between medical tomes when I was heavy into research mode last year. And I was so blown away by her touching, heart-felt and gorgeously written struggles with extreme eating. Not to mention, the stories from her own summer working as a lowly intern in the film industry.

Needless to say, her follow-up cookbook was right up my alley. It’s basically an ode to healthy hedonism, the eating “a lot of good with a little bad” philosophy of yours truly. And when I was flipping through trying to decide what to make first, the Asian Chicken Salad with Peanut Dressing popped right out, as if daring me to bring this dish back into my weekday lunch rotation.

While I’m all for adding a little indulgence to green things, 3,000 calorie salads masquerading as smarter choices just drive me crazy! Andie clearly gets that there are days for salads and days for Meatloaf Burgers. And that there’s no point in eating a meatloaf burger salad.

I think I somehow missed the finer subtleties of healthy salad ordering when I was in college, as both the CPK BBQ and Chinoise Chicken toppings did not necessarily do the lettuce underneath much justice. Andie’s version, on the other hand, is all crunchy veggies—romaine, carrots, red cabbage and scallions—and a peanut dressing that’s way less sweet and sinful than anything you’d buy in the grocery store (not to mention more delicious).

If you’re looking for something new to add to your brown bag rotation—and I highly recommend learning to switch it up—then give this Asian Chicken Salad recipe a whirl. You can sear the chicken, chop the veggies and make the dressing in advance, then mix it all up in individual servings throughout the week! 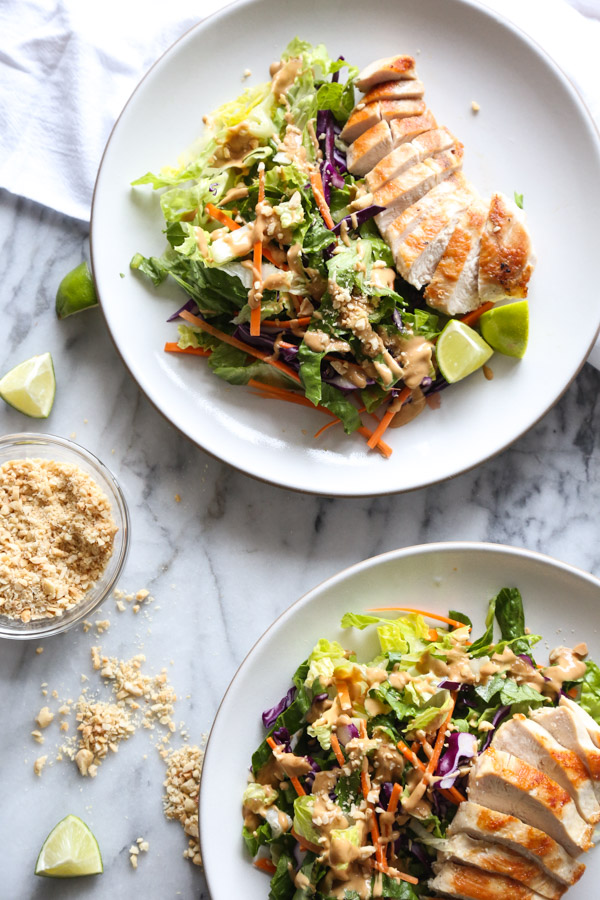 If you make this, tag @phoebelapine and #feedmephoebe – I’d love to see it!
113 shares