My chicken enchilada casseroles have previously required a warning label. Or, so I’ve been told. 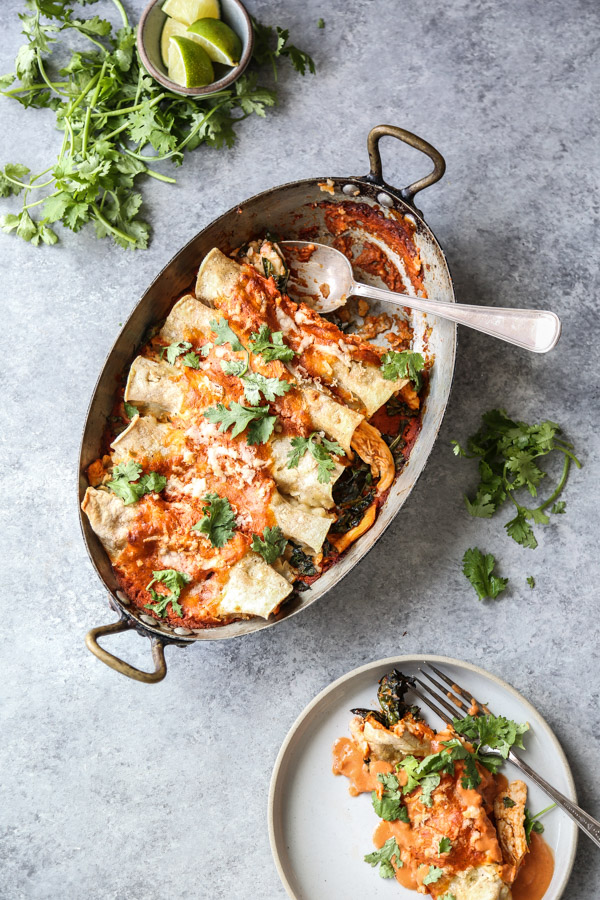 The recipe for green chile chicken enchiladas from my first cookbook is to my repertoire what engagement chicken is to Ina’s. If you’re not sure whether or not a prospective significant other is a keeper, it’s best not to make them my enchiladas.

My best friends’ little brother had an entire dating sequence that stemmed from these enchiladas. If she made it to the fourth date, it was time for her to experience the green chile magic. Upon which, she would be hopelessly under his spell. And since he is soon to wed a longtime enchilada conquest, one might say that the effect lasts for life. 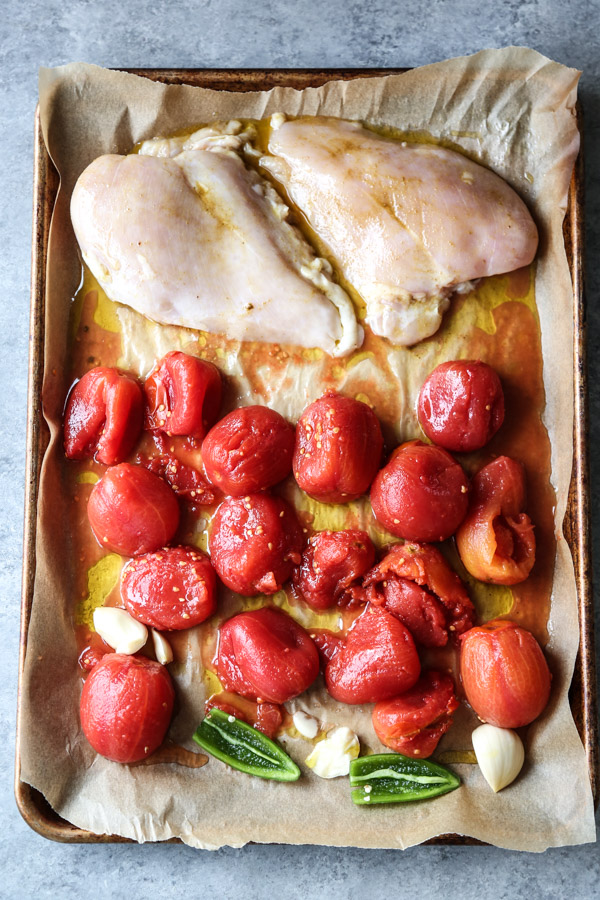 Despite this lore, I’ve never really considered myself to be an enchilada girl. If someone were to pull a similar move, he’d be better off with tacos or tortilla soup. Or, in the case of Charlie’s first meal for me, this chili.

I think part of the reason is, since limiting dairy in my life, I haven’t eaten a whole lot of chicken enchiladas in the last 5 years. Up until a few weeks ago, when I tried my hand at Julia Turshen’s recipe, I had forgotten their bewitching appeal. But having done so, I am under her spell for life. At least, in the friendship department. 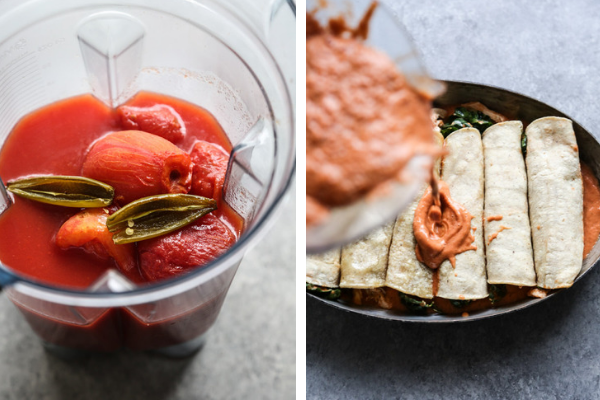 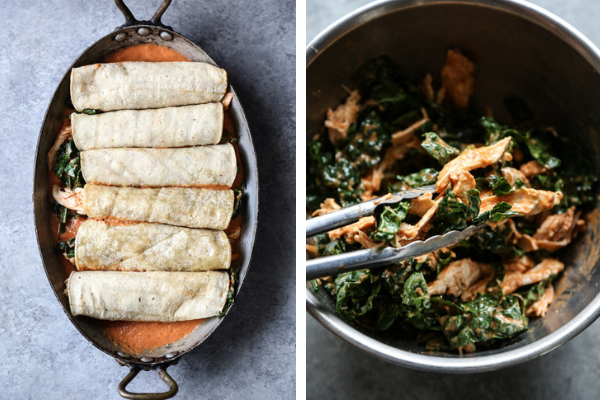 This easy chicken enchilada casserole recipe is from her new book Now and Again, which is organized by menu, and gives you hundreds of make-ahead entertaining ideas, and more importantly, ways to reinvent whatever your guests don’t manage to inhale.

The enchiladas were part of a spread for a card night with friends, which seems like a much more fitting occasion in your 30’s to whip out such a dish, since most people in my life have already married their former purveyor of homemade Tex-Mex delicacies, myself included. 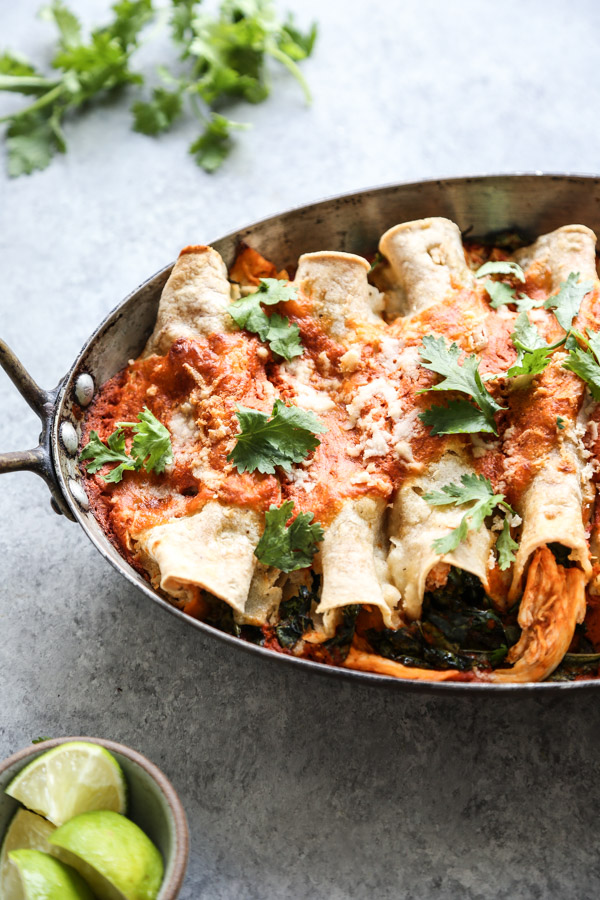 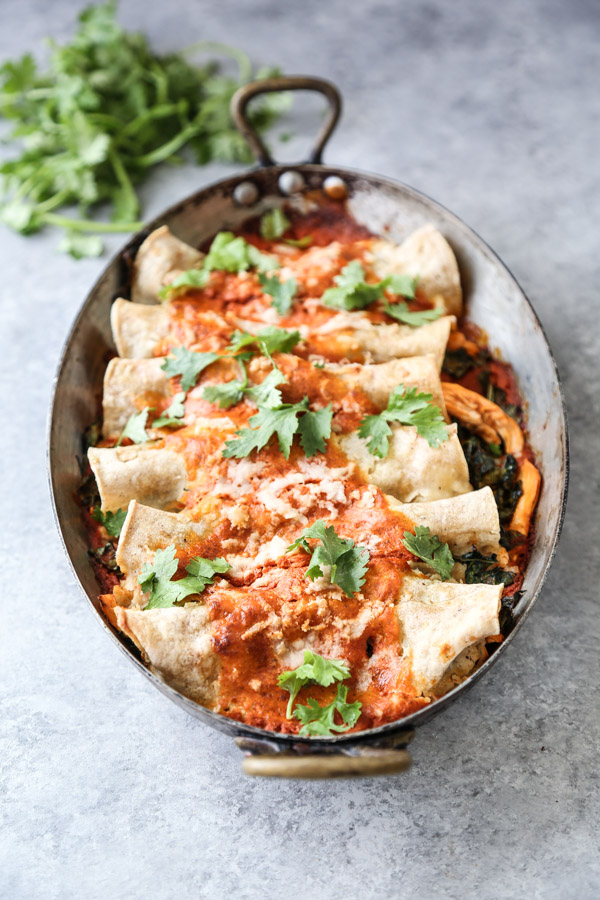 There are a few brilliant things about this recipe’s red sauce that make it both surprising and authentic. First, Julia uses whole tomatoes from a can. This makes it accessible for any season, while a quick roast in the oven caramelizes the flavors and makes them taste like they’re at their peak.

Per her suggestion for ways to use up the leftovers, I made a double batch of the red sauce and used it as a base for tortilla soup and tacos. I.e. all the things that would make me want to marry myself. 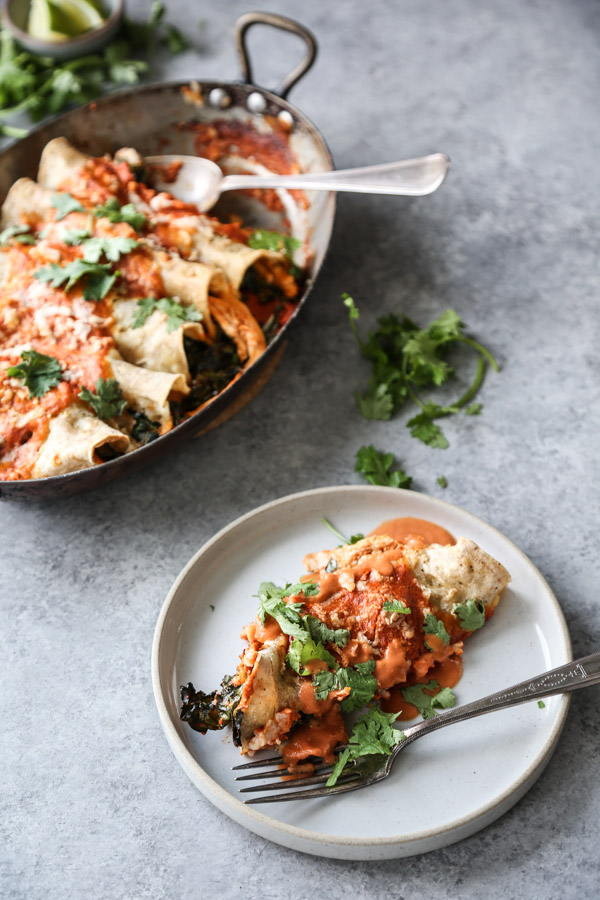 Only, after trying this roasted chicken number, I might just have to add enchiladas to the list. Even without the sour cream and cheese, which I subbed for coconut cream and shredded Miyokos, and even with a heaping helping of kale in the filling, they were insanely decadent and satisfying. The roasted tomato sauce was drinkably good, which only made me doubly happy to have extra portions to do just that with in soup form.

Read on for the recipe, and for more creative, unfussy meals to make keepers for life, make sure to pick up a copy of Now and Again!

p.s. this recipe is also very easy to adapt to be low FODMAP if that’s your dietary bag!

p.p.s. If you’re looking to save time in your low FODMAP kitchen, check out some of these fabulous store bought sauces, spice mixes and condiments. 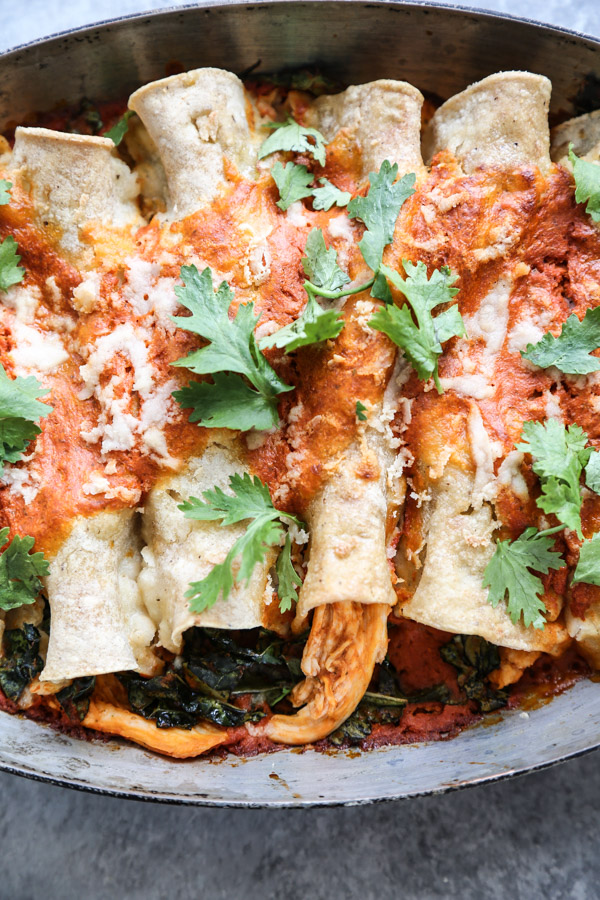 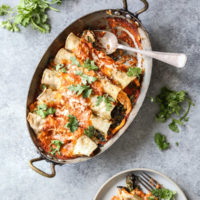 5 from 3 votes
Print Recipe
This Easy Chicken Enchilada Casserole recipe is adapted with permission from Now & Again by Julia Turshen, which is full of fabulous make-ahead recipes for entertaining, and ideas for what to do with all the leftovers.

I made a double batch of this red sauce to use for future enchiladas, but Julia also suggests thinning it out into a creamy tortilla soup base. As for this dish, I made it slightly less authentic by adding kale to the shredded chicken mixture and using coconut cream instead of sour cream for the red sauce to keep it dairy-free in addition to gluten-free. I also used this nut cheese instead of the jack, but you can’t go wrong by sticking with Julia’s original recipe, which you can find in her book!

This is an easy meal to adapt for a low FODMAP diet: simply omit the garlic and be careful about the quantity of nut cheese, if using.

Purposely make a double batch of the sauce for the enchiladas. Use half for the enchiladas and add 3 cups [720 ml] vegetable or chicken stock to the rest, and that’s that. So delicious, and two meals for the price of one. Serve with quesadillas instead of grilled cheese sandwiches.

If you make this, tag @phoebelapine and #feedmephoebe - I'd love to see it!
689 shares