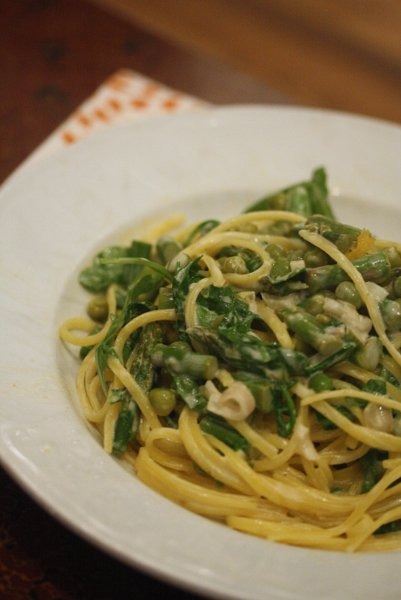 Josh and I have fallen into a very gluttonous, strenuous, and exhausting Sunday night routine. It goes something like this: Dinner. Game of Thrones. Ice cream (two types). Mad Men. Quick shower. Girls.

Sometimes we end up staying up later than we did on Friday or Saturday night, which is a little sad, but also a little bit awesome.

I’m a couch potato through and through. My parents were very strict about TV growing up, permitting no more than 1 hour of viewing time during the week. I imagine this was supposed to make me a better student. But the unanticipated result was that on weekends I turned into an insatiable addict. (It also lead to some very mischievous baby sitter manipulation during the week. At least, the nights that 90210 was on.)

Come Saturday morning, I would sit in front of the TV in a glazed over cartoon-induced hypnosis for the whole day. And then on Sunday, I’d do it again. It’s amazing that I didn’t end up writing my extra-curricular college common app essay on the responsibilities ranch hands faced on Hey Dude.

Once I was in college, I learned moderation. My roommate, Lydia, and I had a TV in our room Sophomore year, and we managed to avoid buying a cable cord until one month before school ended. Clearly, this shows that I had kicked my addiction, but also not managed to become any less lazy.

Now that all of my favorite TV shows are on Sunday night, I’ve fallen back into a routine that reminds me a lot of my youth. It feels indulgent. It feels wrong. And it also feels kind of amazing, mostly because I get to eat my TV dinner with Josh (and then fall into a haze and drool on him). Our meal and TV marathon is something I look forward to each week. And when it’s approaching midnight, and we’re still not halfway through our third show, it feels like we’re milking Sunday for all it’s worth.

This springtime pasta was eaten a few Sundays ago, and might have been Josh’s favorite thing I’ve made in a while. Perhaps it was because I finally converted to quinoa pasta, and it’s just so so so much better than the brown rice Tinkyada. The heavy cream might have helped too. But it’s probably also because a big bowl of this rich, veg-filled pasta is the perfect TV dinner, making your mind ripe for a food coma, and your body calm enough to sit still for 3+ hours on the couch. 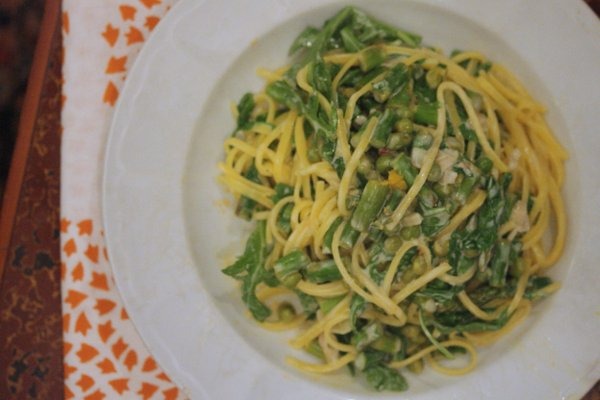 Linguine with Asparagus, Peas, and Arugula 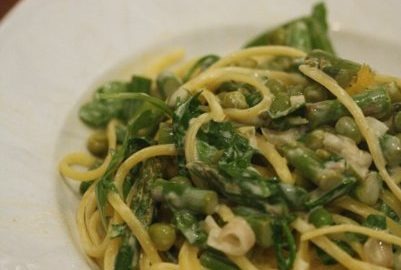 If you make this, tag @phoebelapine and #feedmephoebe - I'd love to see it!
13 shares