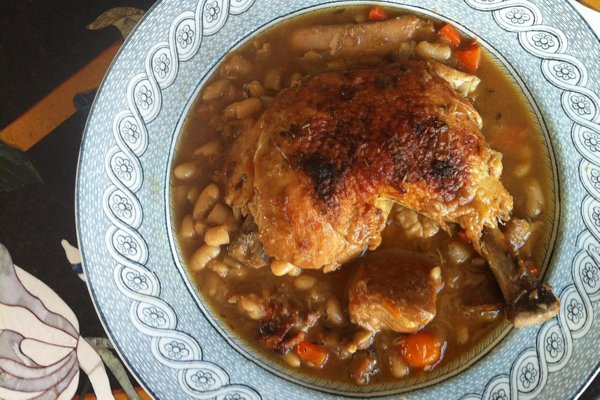 Last February, my friend Sarah dreamed up a very fun and over-the-top idea for her birthday party. Naturally, my first reaction was jealousy.

She wanted to have a 50-person sit down dinner party at her friend’s artist loft on the Bowery. She wanted to make all the food herself, and outsource the rentals and salad makings to me. I told her, from one crazy person to another, that making that much food by herself was not going to be a fun way to spend her birthday. Trust me, I know from many misguided years of experience. But she insisted it would be no big deal. She was only going to make one dish: cassoulet.

Now, that might sound like a reasonable choice. But mind you, Sarah is a vegetarian. This means that not only would she be cooking for 50 people on her birthday, but she would be cooking one of the meatiest dishes on the planet. She planned on making a veggie version too, and also two pans that were gluten-free. But still…

The plan progressed. I put in a rental order for 6 long folding tables and 50 chairs, many many tea lights, and serving ware. Sarah bought butcher paper, 50 Ball jam jars, and many many pounds of duck fat and sausage. Now, in many ways, scoffing aside, Sarah’s plan could have easily been my brainchild. She decided to simplify a dish that usually includes pancetta, pork shoulder, ham hock, sausage, and a whole duck to only feature one of those things. Her cassoulet was solely sausage-based, with both duck and pork sausage to get the flavor of many meats.

I was still skeptical the night of, and continued to be after walking in the door. I arrived an hour early with plenty of homemade salad dressing only to find that the cassoulet had not yet been put in the oven to reheat, and that there were no salad greens to dress. Sarah did not seem stressed about this. I noticed a jam jar tinted with red wine, and knew why. So I followed her lead, had a jar of wine, then ran out to Whole Foods to buy 10 clamshells of arugula.

The party was a roaring good time, so much so, that I am secretly hoping she dreams up a similarly fun logistical food nightmare for this year. Since dinner wasn’t ready til around 11pm, and the jam jars were put to good use prior, I don’t remember much about the cassoulet other than it was so so delicious. I found myself craving it a few weeks ago, so I called Sarah up to ask her about the recipe. I couldn’t believe she had only used sausage, but in many ways, Sarah made a believer out of me that night.

I decided to develop my own simplified cassoulet for a slow cooker piece I was writing for Learnvest. In addition to sausage, I also used pork shoulder and whole chicken legs to take the place of the duck. All three of these proteins are super affordable, so if you’re looking to host 50 of your closest friends for dinner, this would be a smart choice – so long as I don’t have to get the salad greens.

Sarah will be joining me on Martha’s Vineyard for a cozy New Year’s Eve this year. I envision similarly comforting, yet classy food gracing our table. But since there will be a second vegetarian involved, it will probably include no cassoulet. Hopefully none of you will be trapped on an island with a bunch of meatless folk and will give this dish a go as part of your holiday table. 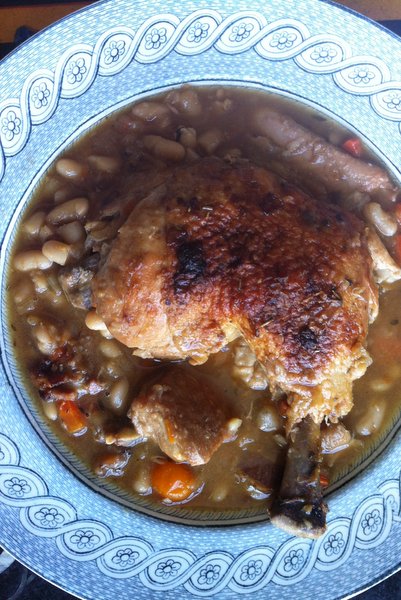 If you make this, tag @phoebelapine and #feedmephoebe - I'd love to see it!
15 shares