I’m sitting here bleary eyed after having gotten off a plane at 2am last night. JFK air traffic control and I are no longer friends. I had to revisit one of the amazing talks from this weekend on forgiveness as we circled the airport for 2 hours.

I spent the last few days in Arizona soaking up wisdom from all sides of the wellness world. Mind Body Green has been an amazing partner for me since launching The Wellness Project, and I felt so honored to attend their Revitalize summit at Miraval Resort. Between the organic margaritas, morning meditations and bulletproof coffee on tap, the weekend was pretty much healthy hedonism incarnate.

As we were heading to the airport, my roommate from the weekend, the long-limbed swimmer beauty and Olympic medalist Caroline Burckle, turned to me and said: “I barely drank and my body feels like I just spent a weekend in Vegas!”

Though I might have broken a personal record for consecutive 5:30am wakeups, I think the exhaustion we both felt came from all the amazing, stimulating conversation and talks throughout the weekend. Perhaps we’ve discovered a new modern wellness ailment: inspiration overload.

If you missed the virtual summit, you can catch some of the talks online. Some of my favorites included the aforementioned conversation on forgiveness, chef Seamus Mullen’s story of how he overcame autoimmune disease through diet, and a discussion of your microbiome’s role in gut health. There was also a great panel on body hacking that sparked a heated debate on the merits of butter and other forms of saturated fat.

Being the aspiring culinary sociologist that I am, I spent a lot of the weekend prodding people on their conflicting food philosophies and then creepily watching what they ate throughout the weekend.

The group meals were a gluten-free candyland—everything prepared was without wheat, which made it the dominant diet that prevailed over the weekend. I assumed that there would be similar stigmas for both meat and dairy, and felt a little sheepish putting cheddar in my omelet during our first morning meal. But I discovered that most people attending were more or less omnivores.

I bring this up because I still have a little bit of gut guilt when it comes to dairy on this site. I try to eat less of it these days than I used to, and to make it organic when possible. But when it comes to cheesy favorites like quesadillas, pizza, and, yes, chicken parm, I can’t quite cut the cord.

During the years I suffered from stomachaches thanks to an undiagnosed serious gluten sensitivity, I assumed the culprit was dairy. But as it turned out, it was the flour in my beloved quesadillas, pizza and chicken parm, not the cheese, that was the issue.

I know it’s not great for me, but since my body hasn’t proven to flat out reject it, I have a hard time taking cheese off the table entirely. Especially since I’m dating a bonified cheese slut who occasionally eats an entire wheel of stinky Camembert and calls it dinner. So my approach these days is to keep these comfort foods in my diet, but to use a little less cheesy goodness than usual. Which is exactly what I did for this gluten-free healthy chicken Parmesan recipe.

Instead of your usual breadcrumbs, the chicken is coated in a ground almond and Parmesan mixture, then baked in the oven until brown and crispy. To prevent the cutlets from getting soggy, and to take advantage of the fresh cherry tomatoes that will be gracing the Farmer’s Market before we know it, I topped the chix with a chunky sauce and a few thin slices of Buffalo mozzarella.

For whatever reason, people seem to be able to better digest cheese that’s made from non-cow milks like sheep, goat and buffalo. So I felt even more vindicated and less shameful adding some slabs of buffalo mozzarella to my healthy chicken Parmesan. It’s a bit more expensive than regular fresh mozzarella, mainly because it’s imported from Italy, but you’re ensured a hormone-free, grass-fed animal (not the case for most American cheese), and it just tastes better.

If you didn’t have your own weekend of jam-packed healthy hedonism, consider indulging in this gluten-free chicken parm to start the week off right! 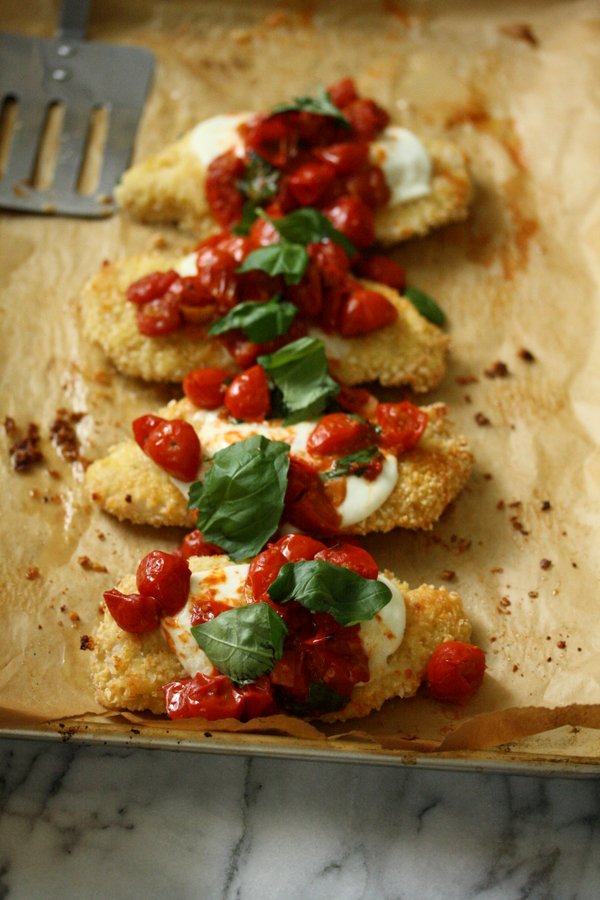 If you make this, tag @phoebelapine and #feedmephoebe – I’d love to see it!
74 shares