Like all those cooks out there who’ve had the chutzpah to admit their failures (and, presumably, those annoying beacons of perfection who have not), I’ve made my fair share of mistakes in the kitchen. Luckily, these gluten-free chicken meatballs are not one of them.

In reflecting on my errors this past week, I’d say that most fall into one of two categories. The first is careless negligence, which includes things like forgetting the brussels sprouts in the oven until they resemble something that Khaleesi’s dragons might have sneezed on. A historical favorite is the time I poured cold stock from the fridge into a straight-from-the-oven Pyrex dish, causing it to shatter/explode dramatically and my neighbors to stop by to make sure everything was okay.

Then there’s the type of mistake that’s just pure technical ignorance. Since I didn’t go to cooking school, I’m particularly prone to this genre of fails. But because I prefer to drink uncurdled eggnog and to not have to throw away 6 ramekins of sunken, nasty soufflés, I tend to stick to recipes that are well within my comfort zone. But this approach to protecting my kitchen confidence proved problematic a few years ago when I had to attend a potluck at Dana Cowin’s apartment, in honor of her book Mastering My Mistakes in the Kitchen.

The evening gathered together some of my all time favorite women in the food community, including many who inspired me to start writing about my small kitchen triumphs and failures in the first place (cough cough, Deb). For the meal, we each had to bring a dish that we’d previously failed at and had since mastered.

I had many fails to choose from…obviously. The tortilla espagnola that covered my kitchen with raw egg when I tried to invert it, and the Canal House biscuits that came out as dense as cookies were among the front-runners. But sadly, I hadn’t yet found courage to right my wrongs, and trying to do so in time to impress my idols seemed like yet another recipe for disaster.

So I decided to go a different route, one that was perhaps a loose interpretation of the word “failure” but would at least semi- protect me from inflicting the full meaning of the word on Dana Cowin’s dining room table. My contribution: baked gluten-free chicken meatballs.

Finding a creative gluten-free solution to my old baked meatball recipe hasn’t exactly brought me to my knees in the same way as that lumpy eggnog. But it did light a fire under my butt to create something that doesn’t use gluten-free breadcrumbs (cheating!) and yet doesn’t feel like you’re cutting into the culinary equivalent of a lacrosse ball.

My jumping off point was to omit the crumbs all together, like The Meatball Shop does with their gluten-free chicken ball. But the result was too dense for my liking. At restaurants, sometimes my experience can be colored by gratitude when I discover a gluten-free alternative on the menu to something I ordinarily wouldn’t be able to eat. Beggars can’t be choosers, and it’s a cross that we dietarily challenged folk have to bear. But at home, I have much higher standards.

The fix came to me by way of my friend Sophie, who told me years ago that she liked to make her meatloaf healthier by using oats instead of breadcrumbs. At the time, I couldn’t fathom such a dense grain melting away like dried breadcrumbs do. But my frequent gluten-free baking failures have made me a lot more risqué over the years, so I decided to get ballsy with my meatballs.

The gluten-free oats definitely created a lighter ball, but there was still something a little texturally off. Eventually I found the winning combination by pulsing the oats a few times in a food processor so that they were coarsely ground—not as fine as flour or dried breadcrumbs, but a nice happy medium.

Since I’m a masochist, I had to leave a little margin for error the night of the potluck and tried the gluten-free meatballs out with a pork and beef mixture instead of chicken. Luckily, this worked out even better, since the added fat in the pork made them all the more moist and delicious (simply substitute ½ pound pork and 1/2 pound beef for the chicken and omit the olive oil, which I found necessary when using a leaner protein).

The potluck was such an inspiring evening of conversation and food. I was relieved to hear that Amanda and Merrill both suffer from mistakes in my “fail category one,” mostly in the form of burnt toast. And that even though she went to cooking school, Serena is just as lazy as I am when it comes to mastering techniques. Kitchen misery loves company, and our tales of fails made me even more confident that perfection is over rated. It also might have been just the fire under my ass I needed to master some of my own shortcomings.

So stay tuned for updated and improved eggnog, tortilla espangola, and soufflé. In the meantime, you can learn from some of Dana’s mistakes, which are hilariously captured and beautifully improved upon in her book, along with advice from some of the best chefs in the world.

Oh, and for extra credit for your gluten-free game, make these meatballs! 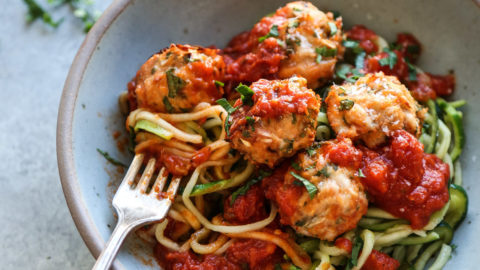 If you make this, tag @phoebelapine and #feedmephoebe – I’d love to see it!
670 shares