The best thing that ever became of my off-campus privileges in high school was salad pizza.

An all access pass to the outside world was something we coveted all throughout middle school, when we were required to stay within the gates of the school. But once the world was our oyster, it mostly meant visiting one of two eateries in the 5-block radius that is considered the “fancy” part of the Bronx.

The favorite was a place nicknamed “the shack” that served colossal subs named after super heroes. Mine, however, was the local pizza place (whose name is escaping me…high school friends, help!). Their plain cheese slice was good, especially when doused with chili flakes. But what was a game changer in my food memory department was the salad pizza.

There was nothing gourmet about the greenery—simply a mixture of chopped romaine, cherry tomatoes and onions. The kind of mix you’d see as a side salad at any red sauce joint. But the idea of dousing a pizza in tart dressing was a revelation.

I’ve always had a palette that errs on the side of acid. If you’re one of my high school friends reading this, you will also remember my early tendency to dip sushi in carrot ginger dressing instead of soy sauce. So it’s no wonder that the red wine-based Italian vinaigrette that came with my salad slice was like pizza catnip.

These days in adult life there are very few things that I don’t enjoy eating in conjunction with half a mouthful of well-dressed greens. It makes everything from a rich risotto to a salty French fry that much better. And it’s also my back pocket trick for dressing up a simple store bought gluten-free pizza crust.

Recently I shared a photo of my personal pie of cappello’s gluten-free pizza with an arugula-radicchio mixture on top. It got a shocking number of ooo’s and ahh’s. But since that sort of semi-homemade meal doesn’t really warrant a recipe, I thought I’d use the same concept to dress up this simple socca—a 2-ingredient chickpea crust that is my go-to for last minute gluten-free flatbreads and pizza pies.

You simply combine the chickpea flour with room temperature water, pour it into a piping hot skillet and bake until firm. From there, treat it like a normal pizza crust: top with tomato sauce, cheese (I used nut mozzarella to keep things vegan and dairy-free), and return to a hot oven or broiler until lightly browned.

Since socca pizza is really the type of pizza that is best eaten with a knife and fork anyway, it’s also the perfect vehicle for salad…which might be the only type of slice that a self-respecting New Yorker—even one from the fancy part of the Bronx—would dare eat with a knife and fork.

Read on for this gluten-free salad pizza recipe with chickpea socca crust, and let me know if putting dressing on your pie is as much of a life changing experience as it was for me 20 years ago. 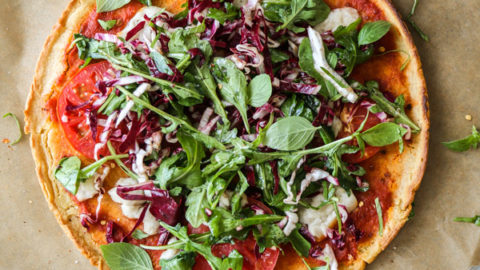 4.50 from 2 votes
print recipe
If you’re looking for a healthy gluten-free pizza recipe this socca salad pizza is the perfect thing. The chickpea crust is just two ingredients and cooks up in 10 minutes. The topping is vegan and packed with greens—healthy hedonism in a pie!
Prep Time 10 minutes
Cook Time 15 minutes
Total Time 25 minutes
Servings 2
Author Phoebe Lapine

If you make this, tag @phoebelapine and #feedmephoebe – I’d love to see it!
444 shares