This green almond milk smoothie recipe is brought to you by my friends at Almond Breeze. As always all opinions are 100 percent my own. Thank you for supporting the brands that make this site possible! 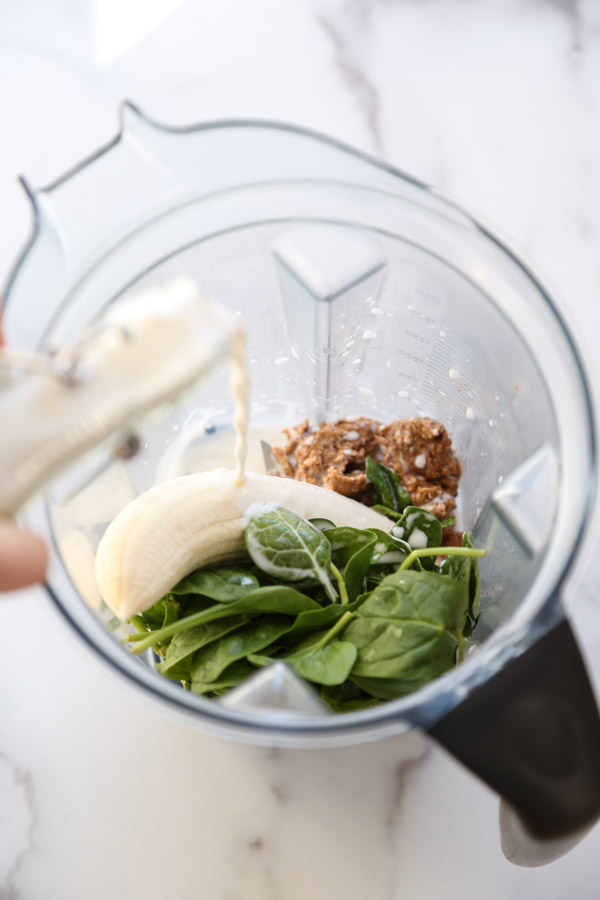 As I mentioned in yesterday’s newsletter, I’m doing my own version of a detox this month – no alcohol, caffeine, or sugar. I’d like to call the experiment: Jews Do Lent.

The alcohol has weirdly been the least emotionally problematic of these three vices. This weekend I managed to soberly survive an afternoon brunch dance party followed by an even more dancey wedding. The biggest learning experience is that without alcohol (and its subsequent hair tosses and flailing limbs) I am acutely aware of my lack of rhythm. Being in on the dance floor felt a little bit like being forced to watch videos of myself doing bad camp skits as a brace-faced adolescent (i.e. painful). But the good news is: if I can make it through a day like that successfully, I can do anything. 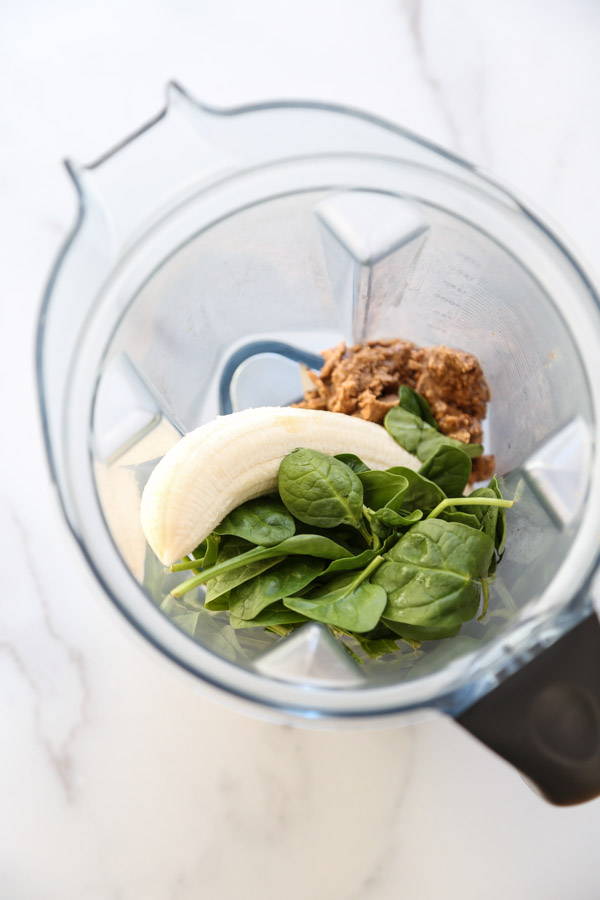 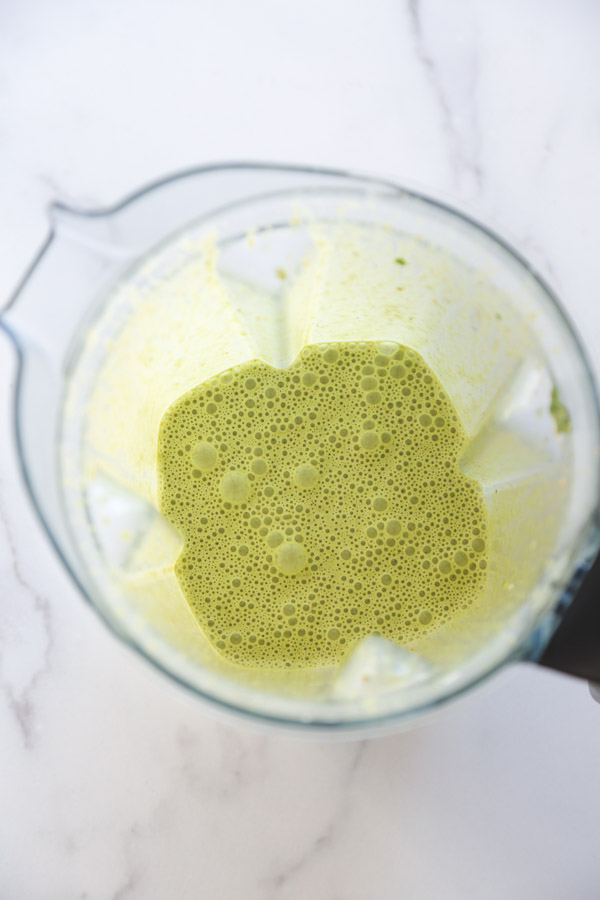 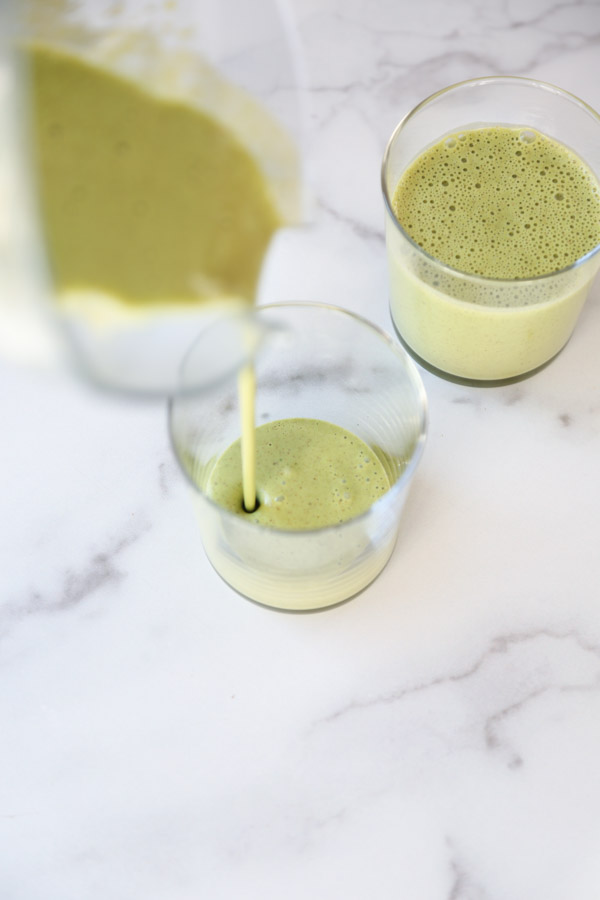 The biggest hurdle came at dessert hour when the table was covered with petit fours. It’s rare that I’m actually able to eat dessert at weddings. Usually (under the influence of alcohol) I just take to helping myself to a few fingers full of frosting from my seatmate’s slice of cake. But this wedding had French macaroons and chocolate covered strawberries and truffles. And that was just too much for me to resist. I ended up having a little nibble of everything and discarded the second half of the confections on Charlie’s cake plate. I’m sure you’re all thrilled that you’ve never had to sit next to me at a wedding.

I definitely got my sugar fix that night. But almost immediately I came down with a crazy headache. So now I’m back on the wagon until April. 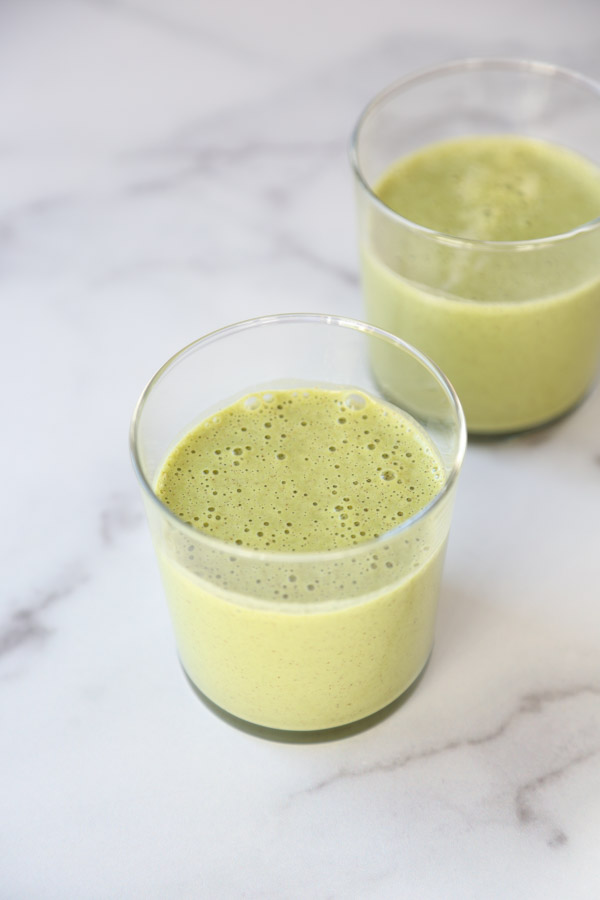 One of the meals that I’ve had to totally revamp is breakfast. I usually don’t have time to make myself anything too elaborate. So my default has been an array of gluten-free breakfast bars. The first week of my detox I took a look at the wrapper of one of my favorite organic bars and was shocked by the sugar count, even if most of it was natural.

So I’ve been hard at work designing new options that I can have on hand for the week or throw together quickly in the morning. I have a recipe for make-ahead chia pudding coming up later in the week. But as far as the latter camp is concerned, a smoothie is one of the easiest things to prepare first thing in the morning. 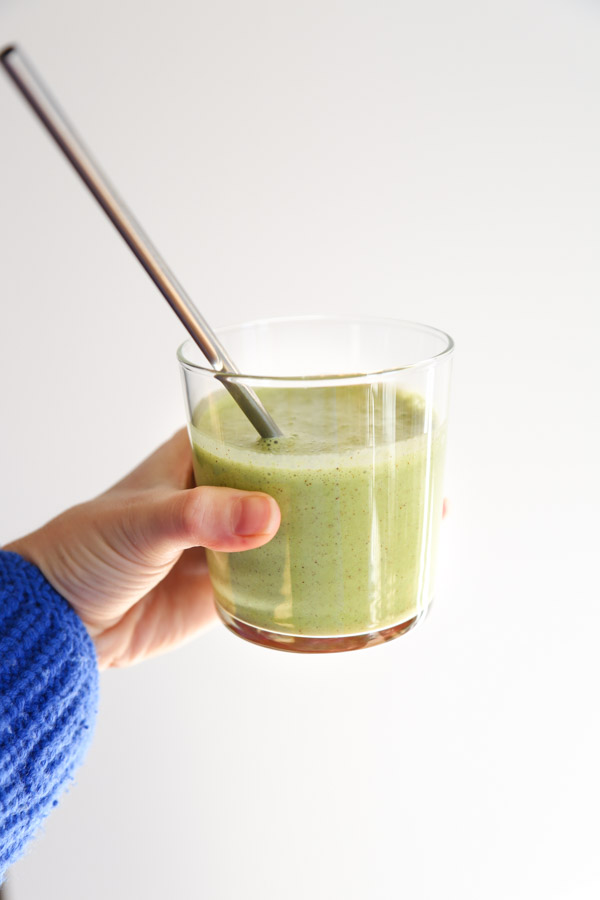 I copy catted from my favorite local vegan shop, Blossom du Jour. They have two green smoothie recipes that I love – the Thrive and the Green Giant. My version is a hybrid of the two with organic almond milk, almond butter, banana, and baby spinach (though frozen spinach or kale would work too). There’s no added sugar and the almonds are a great source of protein and also have anti-inflammatory properties.

It’s St. Paddy’s day, so I thought I’d share this little green morning treat with you all, since I won’t be partaking in the Guinness Fest like the rest of you good Irish lassies. It’s one of those easy recipes for everyone – so consider adding it to your morning routine! 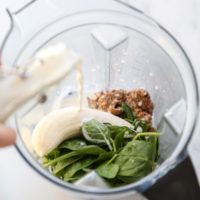 Print Recipe
If you use frozen bananas, that will help keep the drink cold and give it that icy smoothie finish. I don't love sugary breakfasts, but if you like your smoothies sweet, you might want to add a tablespoon of honey or agave.
Prep Time 5 minutes
Total Time 5 minutes
Servings 2

You can save a portion for the next day, or double the recipe to have some smoothie in the fridge for the week.

This green almond milk smoothie recipe is brought to you by my friends at Almond Breeze. As always all opinions are 100 percent my own. Thank you for supporting the brands that make this site possible!