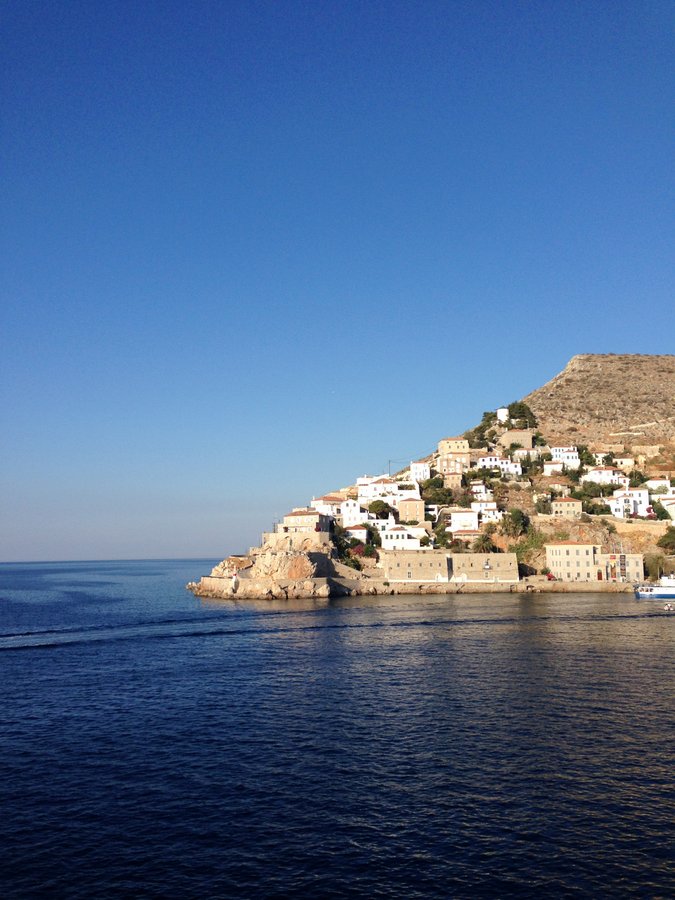 I feel comfortable admitting now that I spent the majority of my time in Spetses wishing there was someone else with me on the trip. Someone, say, who’s used to me opening bags of potato chips at restaurants to use in place of bread for dipping in tzatsiki, and someone who would agree that the Greek table wine tastes better when chased with a mouth full of olives.

I’ve traveled to about a half dozen countries by myself (including here and here), and learned that some are better than others to do solo. Greece is a particularly sad place to eat alone, as all the meze come separately and are meant for sharing. But I’ve also learned over the years that you have to be in the right mindset for solo travel. It can be great when you’re single and feeling confident and self-indulgent and you want to try and compare every shrimp skewer in a 10-block radius, or go night swimming with a pair of male Dutch field hockey players, just to cross it off your bucket list. But if you’re in a lonely depressive mood, solo traveling can make your mind a more inhospitable place to be than a 5 Euro youth hostel in Latvia. 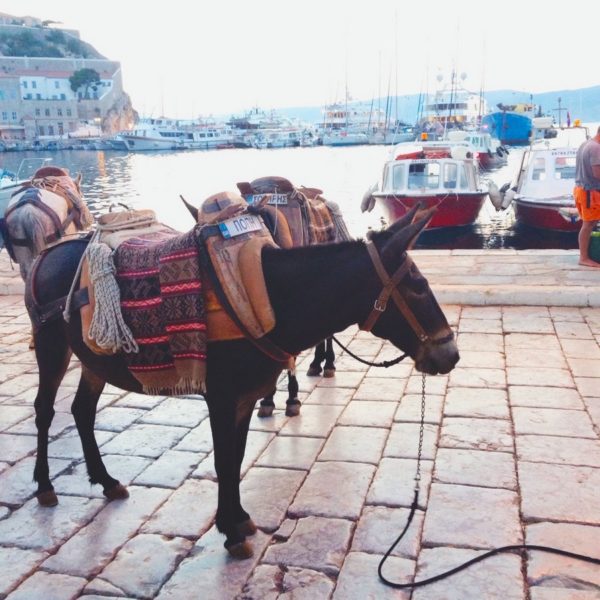 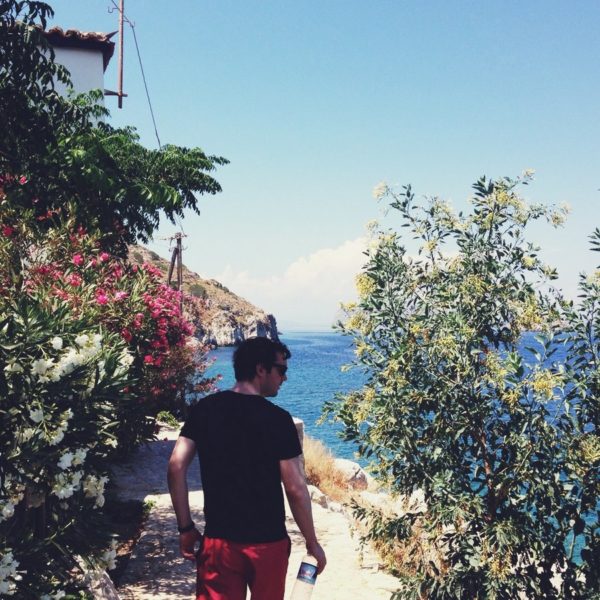 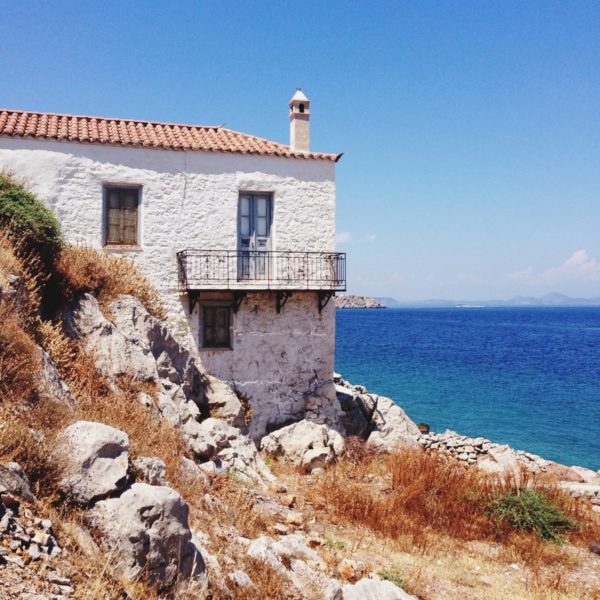 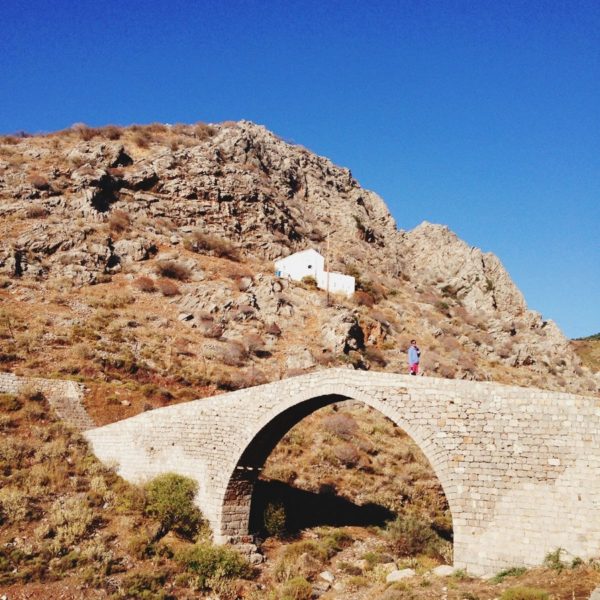 My time in Spetses was not this type of dire circumstance. But still, in a place as romantic as Greece, you’ll find yourself missing your partner in crime more than usual. So after my Alive Tribe retreat was all said and done, I was particularly excited to meet up with my favorite dinner date in Hydra and to commit some crimes on a plate or two of whole grilled fish.

It was my first real trip with Charlie and I think we chose the perfect island, in the perfect part of the world to have a safe, conflict-free adventure. Part of the beauty of Hydra, both physically and emotionally, is that there are no wheeled vehicles on the island. This means that the majority of your adventures must be had by foot, and that most of said adventures are in close proximity to the main harbor. 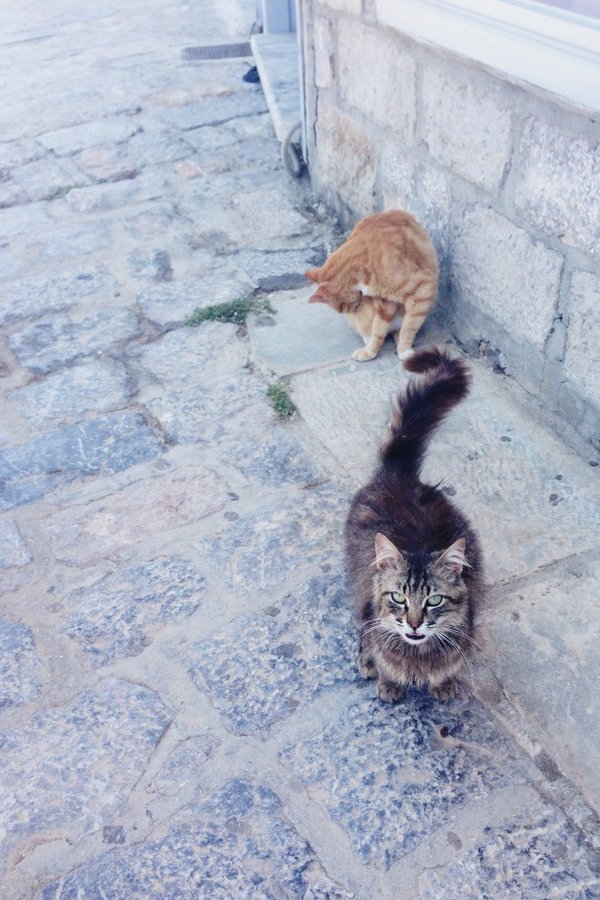 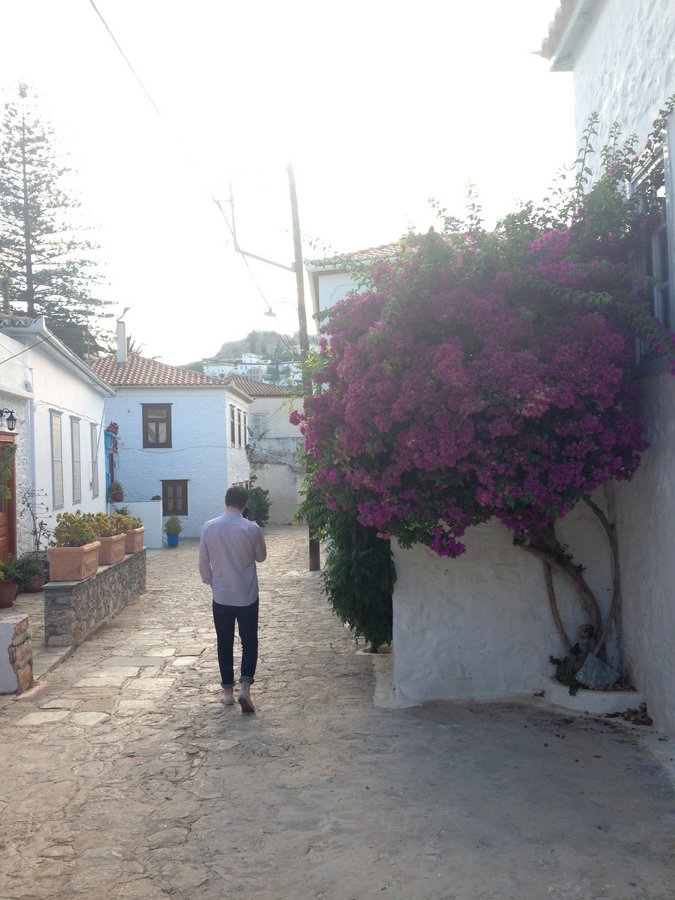 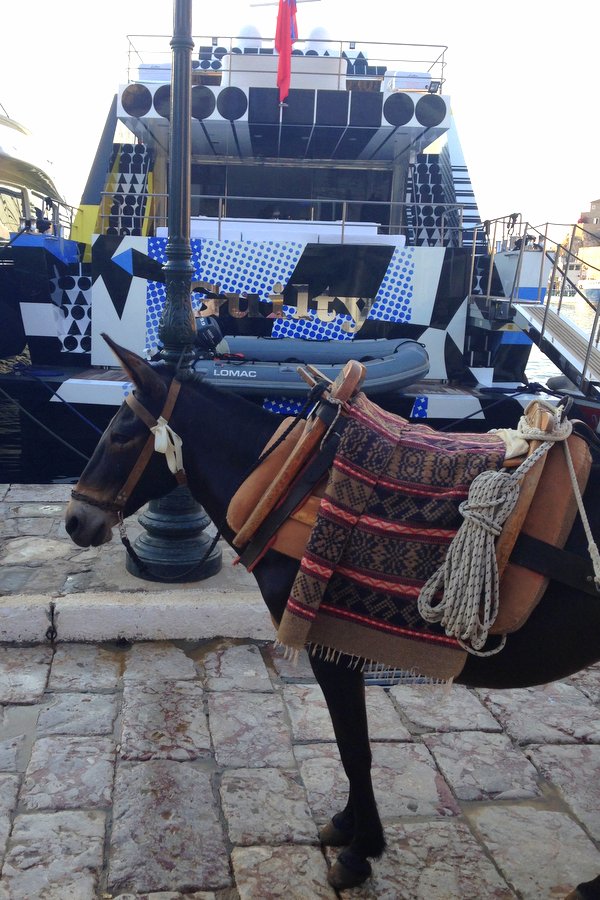 We spent our days walking the shoreline from beach to beach and exploring the small one-horse fishing towns along the way. At night we scoped out the town for the best traditional tavernas and the tastiest tourist traps right on the water. The process of scoping can easily go horribly awry. So I was relieved that we didn’t fall victim to one of those catastrophically typical and stupid travelers fights that couples get into when they’re hungry and can’t find a good restaurant on the cartoon hotel map.

Our restaurant wandering did at one point take a turn for the creepy when we spotted the infamous Jeff Koons yacht, “Guilty,” and decided to casually stalk its owner, Dakis Joannou, to see where he was eating dinner. Unfortunately, we didn’t end up making it to his pick at a later, less blatant hour. But I’ve included the recommendation below, along with all our other picks for where to eat, sleep, and beach, should you not have access to a neon purple and yellow floating mansion and have to travel by donkey like the rest of us. 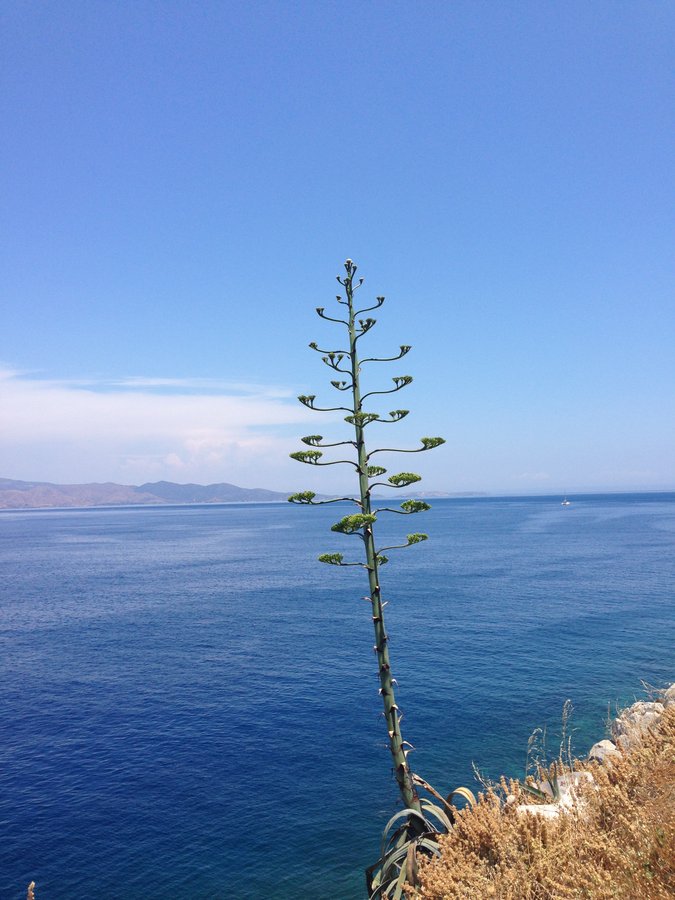 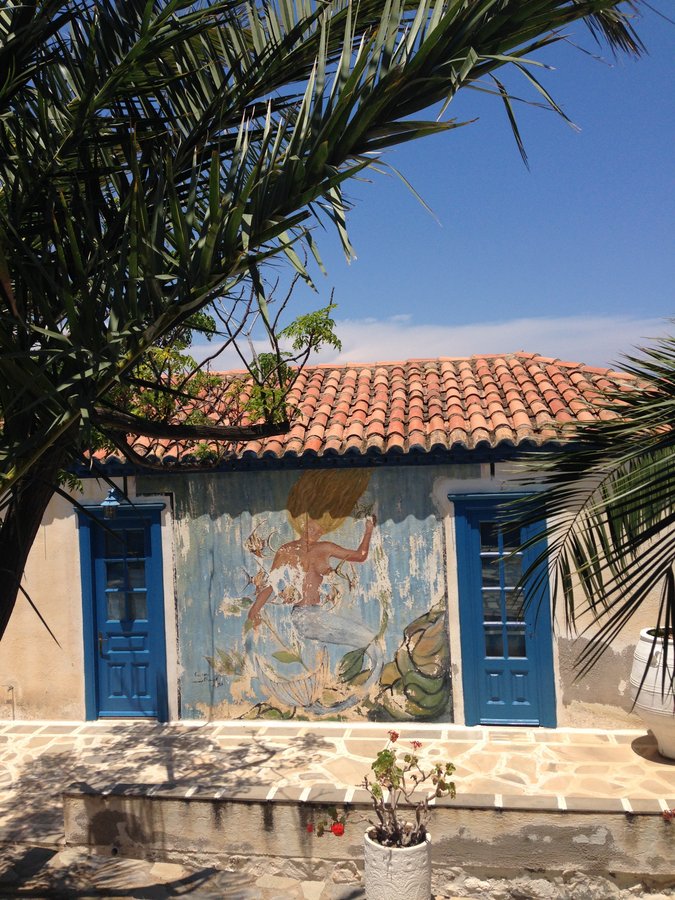 Getting There and Around

Hydra is one stop closer to Athens on the same ferry line as Spetses. By hydrofoil (hellenicseaways.gr), it’s only 1 1/2 hours from Pireaus, though I found that every ferry in Greece took 30 minutes more than the ticket estimated, so plan accordingly. “Greek Time” is definitely a thing.

Hydra has remained rustic and unpopulated outside the town center mainly because there are no wheeled vehicles on the island. This is probably also the reason why it is such a magnet for yachts, which is the best possible way to travel around. If you don’t have access to one, as we surely didn’t, there are plenty of donkeys, mules, and pack ponies (with license plates!) for the express purpose of schlepping you wherever you want to go. That said, you can easily walk between the main towns on a well kept path that runs along the Northern shoreline. It’s a great way to explore. 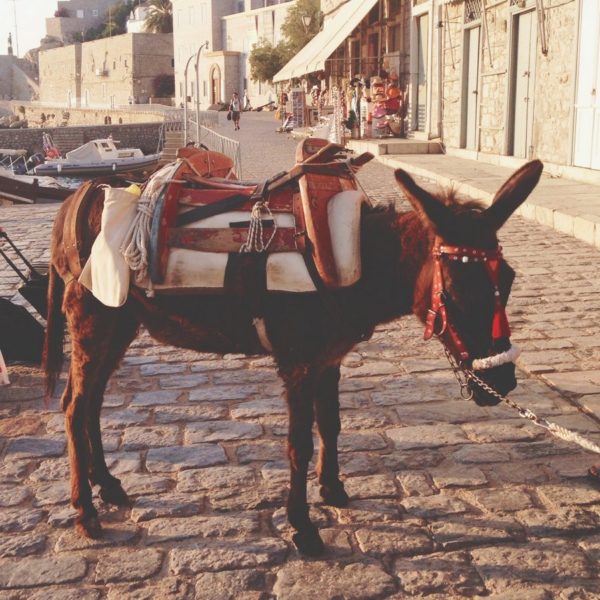 If you’re more athletic and less lazy than we are, you might also want to grab a trail map and explore the interior of the island, which is dotted with ancient churches. Just be prepared to scale the hills under the blistering hot summer sun. We opted for “hiking” closer to water so that we could rest our not-so-weary bones in the Aegean and fill our bellies with fish afterwards. 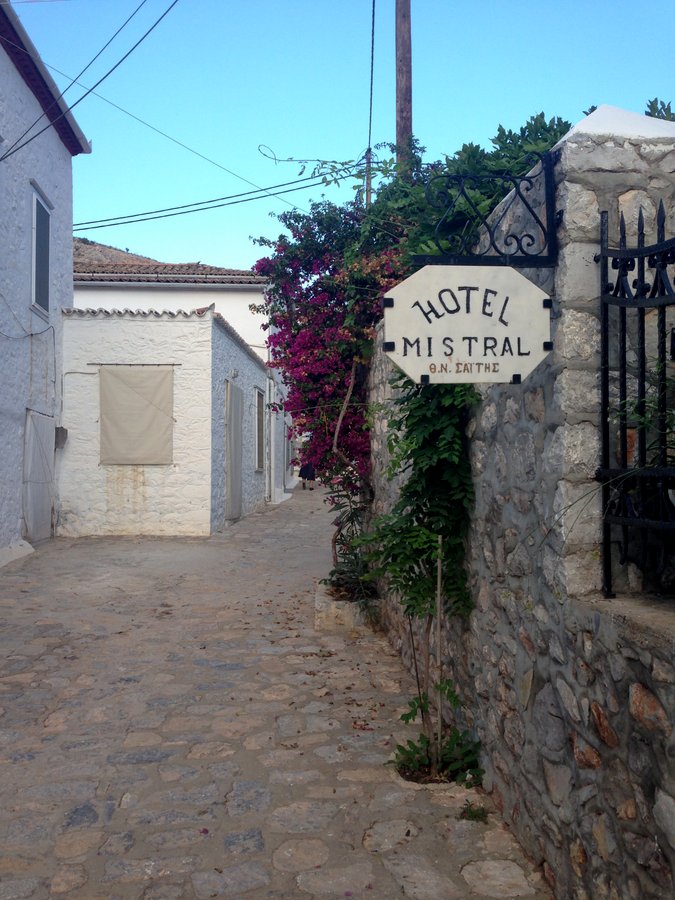 We had a wonderful stay at this cute, moderately priced spot. The owners were charming and attentive. They also made one mean breakfast. Be prepared for multiple courses of everything from veggie-feta omelets to apple strudel, with a different selection daily. They start the service with a glass of healthy, dairy-free vegetable soup and each one was fabulous. That might not be everyone’s cup of tea at 9 in the morning, but it’s pretty much my best case scenario when starting the day on vacation, where I usually have trouble finding breakfast options that are gluten-free. Speaking of which, they were very attentive to my dietary restrictions and always brought out a 5th option of yogurt and honey for me if I couldn’t eat something on the menu. The hotel itself is tucked away on the outskirts of town, making it a great quiet option, while also a stone’s throw from all the action.

When we were deciding where to stay, these two places also looked like great options: Bratsera Hotel, which also has a well-reviewed restaurant and a pool on site, and the slightly pricier, more modern Hotel Leto.

If you don’t mind staying outside Hydra town, the Four Seasons Luxury Suites looked nice enough and was home to our favorite beach on the island. There’s a great restaurant on site too. Don’t be confused though: this isn’t an actual Four Seasons hotel, though the brilliant marketing mind behind the naming clearly tried to price the rooms according to that assumption. Save your Starwoods points for Athens. The water taxis stop here every 20 minutes, or you can walk into town for dinner (about a 30-40 minute walk) and taxi back, or just stay put and relax for a few days. You’ll probably get bored here after two nights. 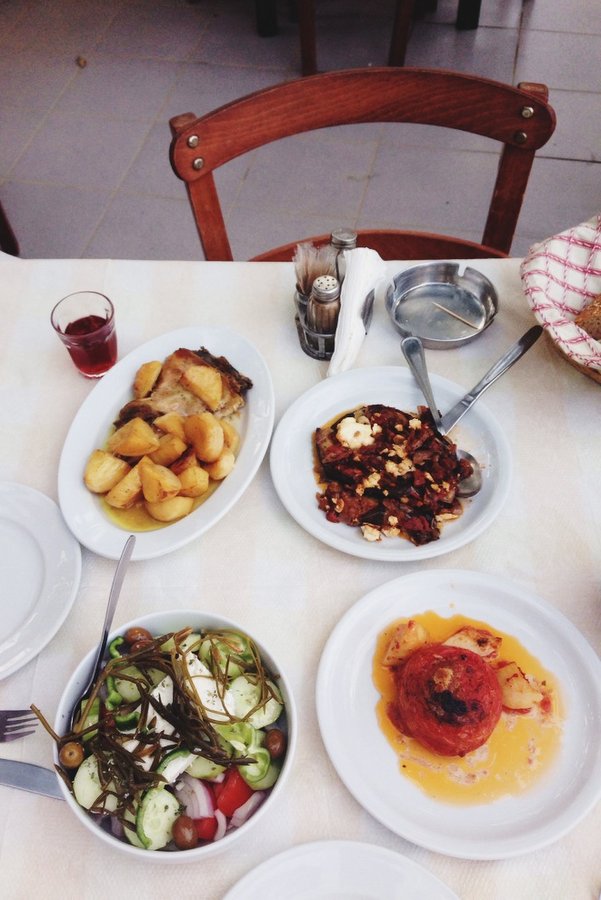 This was by far our favorite meal on the island. We tried to go twice before we were able to get in, so make sure to reserve a table if you plan on dining during peak hours (8-11pm). We finally went at 7pm and were able to walk in and get a nice spot on the balcony, which is a beautiful place to watch the sun set over the mountains, and not as much of a visual flytrap for tourists who just want to look out over the sea. If you want a true mom and pop Taverna experience with excellent food, you need to go here. It took us 30 minutes of casual strolling followed by 20 more minutes of more urgent google mapping to find it. It turned out not to be very far from our hotel, so you might want to ask yours for directions so you don’t get hangry like we did. 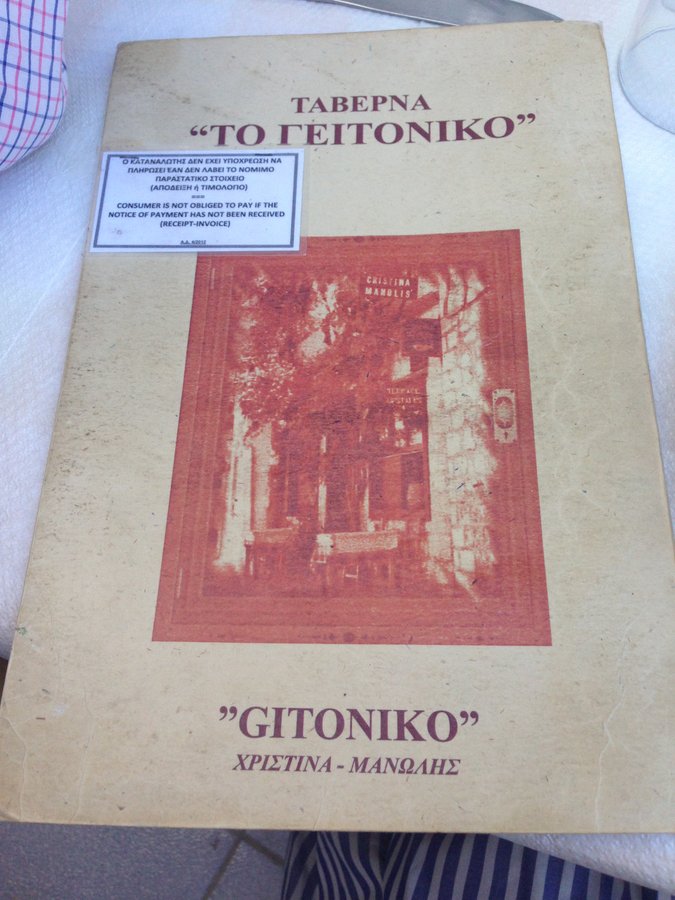 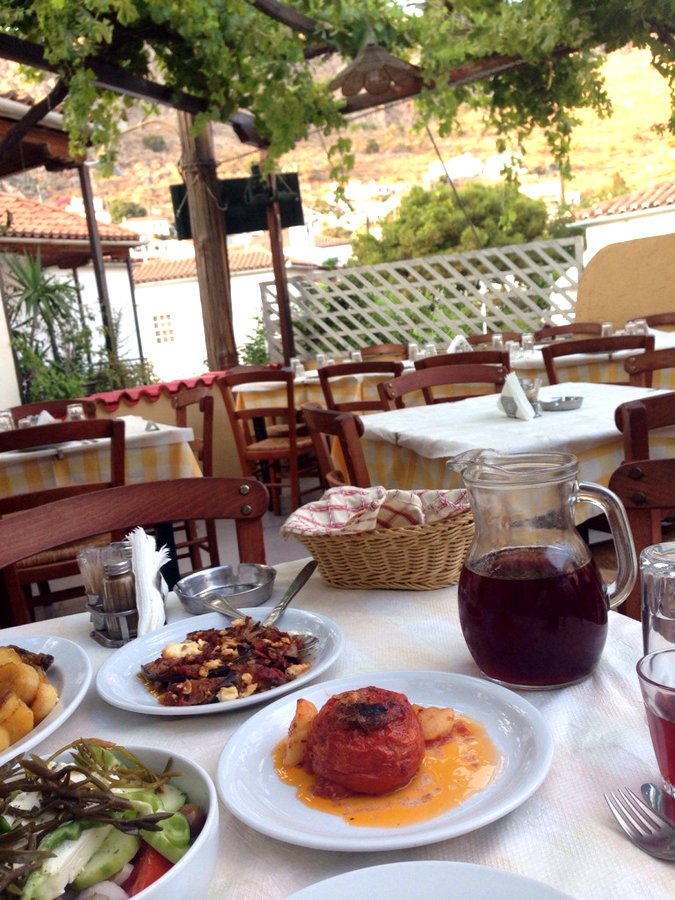 When you walk in you’ll see a case of their specialties. I’d recommend anything and everything in that case. We had stuffed tomatoes with rice, baked eggplant imam, and melt-in-your-mouth chicken with lemon potatoes. The Greek Salad was also one of the best I had all trip, with loads of caper berry leaves in addition to olives.

The whole meal, including a giant carafe of rose (which went down like lighter fluid), was cheaper than my souvlaki at the airport.

If you’re looking for more of a white tablecloth experience, the setting and the food were excellent at Sunset. As was, um, the sunset itself. This place looks like a total tourist trap. But since views are cheap in Hydra, it’s actually also home to some great refined (if pricey) cuisine. We had a beautiful whole grilled red snapper and a lovely bowl of uni risotto. 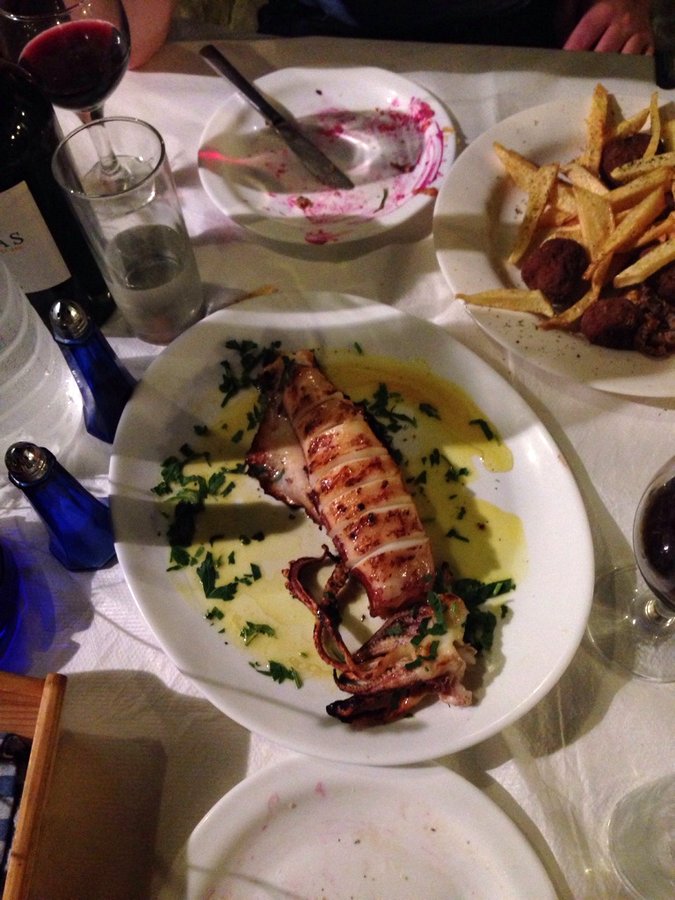 On our second night when we couldn’t get into Gitoniko, we ended up going to this little taverna on one of the more populated side streets. I think we ordered wrong, but our experience was just ok. The beet salad with yogurt sauce was good. Charlie loved his meatballs. The squid was large and a bit rubbery. If I could have eaten it, the daily special of rich moussaka looked like the right choice.

This is the restaurant we were led to at the end of our creepy stalking session. It’s right next to Sunset, and similarly perfect for taking in the views. We didn’t try the food, but if it’s good enough for our favorite Greek shipping magnet and art enthusiast, I assume it’s good enough for you and me. Either way, it’s a beautiful spot to grab an evening drink. 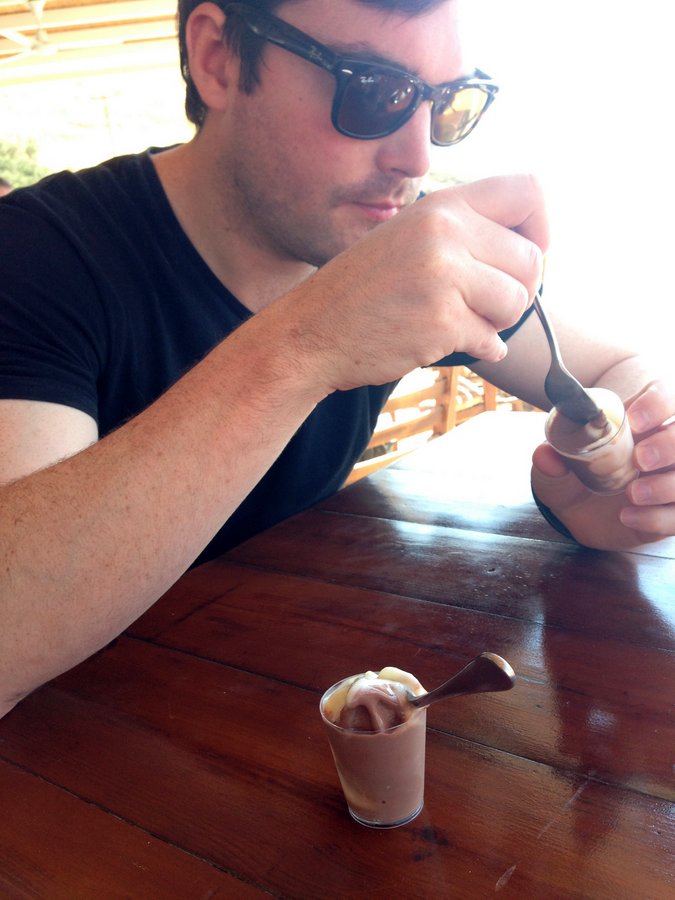 We spent the afternoon at Vlyhos beach and ate lunch mid-day (around 3) at this seaside Taverna. We had a great whole grilled fish and side of island greens. The zucchini fries and meatballs at the other tables looked equally delicious for the non-GF folk. The best part of the meal: the mini cups of soft serve we got with the bill.

There are a bunch of bars lining the port. We were there for the World Cup, so we sat at various spots and watched the game before and after dinner. My friend recommended Pirate Bar as the best venue for a cocktail. We took his advice and had one too many vodka mules, like a pair of island teenagers, who seemed to favor this spot. They were delicious, but we paid the price the next day. I’d say stop by any of the harbor bars or restaurants mentioned above if you want to grab a drink and people watch. 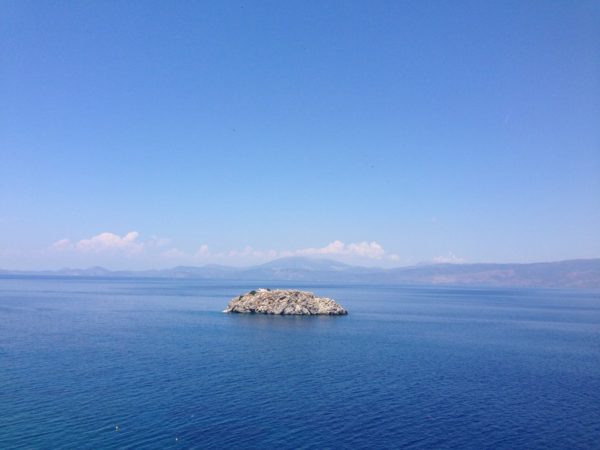 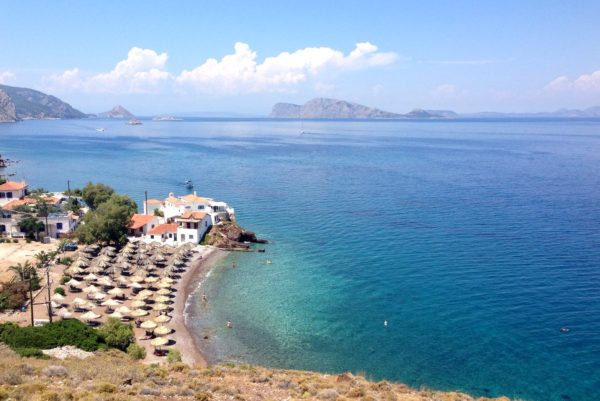 Like most of the other islands in the Argosaronic Gulf, Hydra isn’t one of the Greek watering holes known for its white sand beaches. The shoreline is craggy, making for beautiful cliff views, but rather pebbly beaches. If you don’t have access to your own boat, you can take water taxis to some of the swimming spots on the more secluded southern side of the island, or to any of the advertised beaches. Once you make it past the rocks and into the sea, the swimming is magical.

Our favorite spot was Vlyhos beach, which was the perfect length walk from town, about 40 minutes, and had a great restaurant. It was quiet, even with people under every umbrella, and totally relaxing.

We walked the opposite direction from the harbor the following day and found another beach with free chairs if you eat at the small run-down taverna. There’s a derelict hotel on the other end of the bay with plenty of other chairs, but we found the vibe depressing and ended up taking a water taxi back to Vlyhos after lunch. 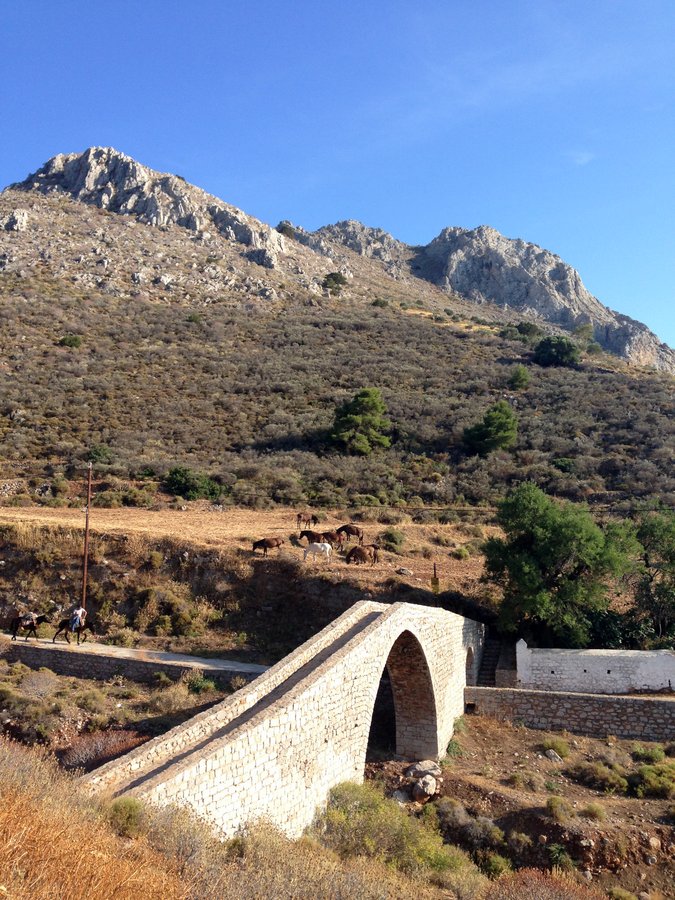