These gluten-free vegan IKEA meatballs are brought to you in partnership with my friends Little Northern Bakehouse. As always opinions are 100 percent my own. Thank you for supporting the brands that make this site and my Swedish meatball cravings possible!

When I think of IKEA, my most familiar association is not a trembling, near-collapse bureau drawer, nor the panic attack involved in building it. It’s not even the blue bags that were responsible for single handedly moving Charlie and I from our old apartment to our current home. Rather, when I think of Ikea, I think of Swedish meatballs. And then I think of my dad’s old assistant Darren.

Darren loved Ikea meatballs and used to brave the swollen throngs of college-bound cheap bookshelf seekers just to get his fix. This should not surprise me, since Darren also used to brave other horrors of dorm set-up without any promise of a creamy gravy sauce as compensation.

I used to call him “big brother Darren” because his responsibilities as my dad’s minion included moving me in and out of multiple dorm rooms, and chauffeuring me, my duffel bags, and mini fridge the 3-hour drive to and from. Needless to say, even though he never assembled furniture, Darren was an angel. And I only wish I had my cooking prowess back then to make him imitation Swedish IKEA meatballs as a thank you for all the schlepping.

My memories of what these meatballs actually taste like is a little fuzzy, but my hunch is that even if they weren’t packed with gluten, I wouldn’t be crazy about the mystery meat concoction today. For the die-hard fans amongst us though (and big brother Darren, I know you’re out there somewhere), I thought it would be fun to craft a plant-based, gluten-free version of this Swedish delicacy.

These amaze-balls are made from a combination of mushrooms and lentils. They are lightened up by a heaping cup of fresh pillowy breadcrumbs made from a few slices of Little Northern Bakehouse White Wide Slice bread. Their loaves are not only gluten-free but egg-free as well–which is a hard thing to find in the grocery aisle–and certified as Glyphosate Residue Free by third-party testing so consumers don’t have to worry about this cancer-causing substance. I love using their breads to add bulk and goodness to ordinarily trashy foods (like these nuggets, and, well, these meatballs right here).

Though the balls themselves are usually the main ground zero for gluten, with Swedish meatballs you also have to worry about the gravy sauce. In this version, I’m borrowing from my buddy Jessica Murnane’s fabulous mushroom-based vegan gravy from her book One Part Plant. Instead of pureed cashews I take a short cut here by using cashew butter and coconut cream, thereby avoiding dirtying another appliance. These two ingredients make the gravy sauce extra creamy and thick without the use of any flours or a blender.

The only thing to beware of is the crispy Swedish veggie balls becoming soggy in the gravy. I would recommend tossing them together right before your serve and eating immediately. The faux IKEA meatballs would be a fantastic main course over mashed potatoes or a saucy finger food that can be eaten with toothpicks.

Read on for this vegan Swedish meatballs recipe! 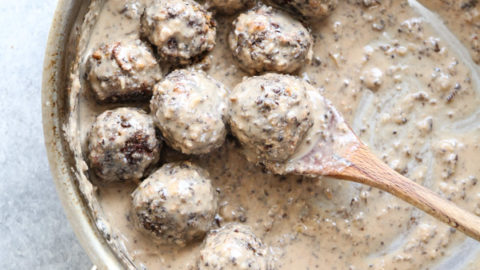 5 from 2 votes
print recipe
These IKEA-style vegan Swedish meatballs would be a fantastic main course over mashed potatoes or a saucy finger food that can be eaten with toothpicks. The gravy is inspired by my buddy Jessica Murnane’s book One Part Plant.
Author Phoebe Lapine

Note: If you don’t have cashew butter, you can soak 1/4 cup cashews overnight. Puree with the 1 cup vegetable broth in a high-speed blender until creamy and proceed with the recipe.

If you make this, tag @phoebelapine and #feedmephoebe – I’d love to see it!
231 shares