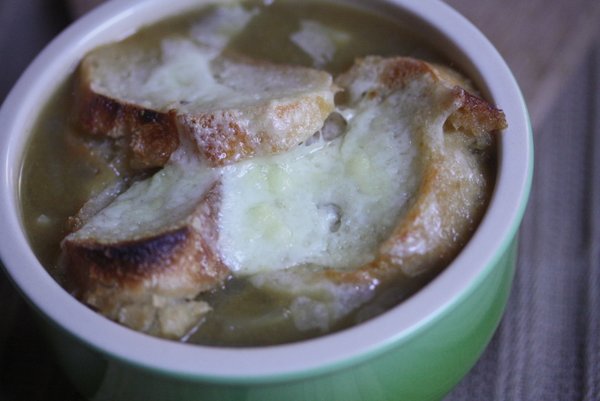 I’ve been eating terribly this month. I know I’m not alone in this. Between all the holiday parties and running around like a crazy person, it seems all I have to do to make a new year, new you resolution is to cut my cheese intake down from 5 to 1 pound per week.

One of my guilty pleasures as of lately is Friedman’s Lunch’s grilled cheese. They have amazing gluten-free baguette, and the sandwich is made with the outer crust on the inside and plenty of gooey gruyere, caramelized onions, and thick cut bacon oozing out the sides. With a cup of tomato soup, there’s nothing better.

My resolutions might have to start mid-month, as I’m taking on a fun recipe development project for La Brea Bakery all about creative grilled cheeses. So you just might be seeing a recipe that sounds shockingly like the above description tempting you on this site in a few weeks.

In the meantime, Friedmans gooey grilled cheese got me thinking about my other favorite use for gruyere: French Onion Soup. One of my class clients requested that we make it the other day, and I was pleasantly surprised all over again by how easy it is. You slowly caramelize the onions, add good beef stock, and it takes little else to create that delicious flavorful broth for healthy French onion soup.

A few weeks ago I sequestered myself at my parents barn to get a little writing done. I refused to let myself have any distractions, not even cooking. So I decided to try a slow cooker method of making French onion soup – without the caramelizing, but with a long slow simmer. I added fennel to give it a little twist, and set all the ingredients on the stove for a few hours to get to know one another. The resulting soup lacked some of the richness that you get by slaving over the stove. But for the work that went in, it was pretty darn good. I’ve included the original stove-top instructions below and also directions for the slow cooker variation, which will also be featured on Learnvest in a couple weeks.

Since no French onion soup is complete without the cheese, toss some bread and gruyere under the broiler – or, if you have oven-safe bowls, mound it on top of the soup and stick the whole thing in the oven for a full bistro effect.

I’ll be teaching a gluten-free brunch class at Haven’s Kitchen on Thursday. If you want to learn how to caramelize those onions for some buckwheat crepes and get your fill of gooey gruyere that way, please join me! There are still spots available and I would love to see you there. 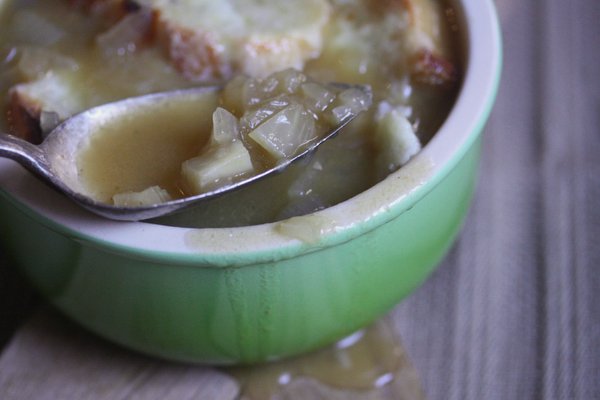 No ratings yet
print recipe
To make this in a slow-cooker, simply combine all the ingredients except the bread and cheese in a slow cooker and simmer on low for 4 to 6 hours until the vegetables are soft.
Author Phoebe Lapine 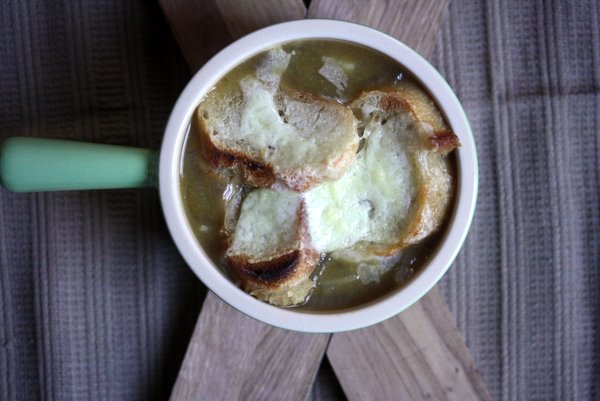 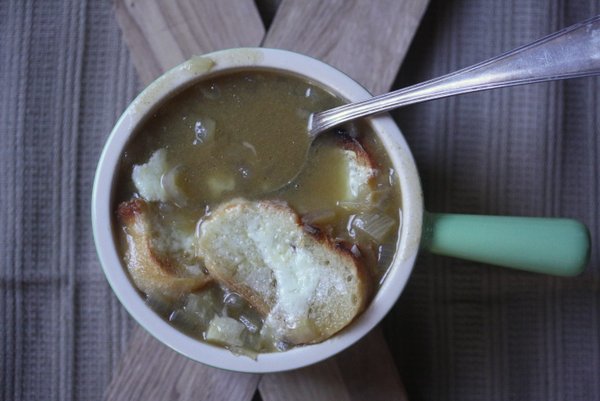