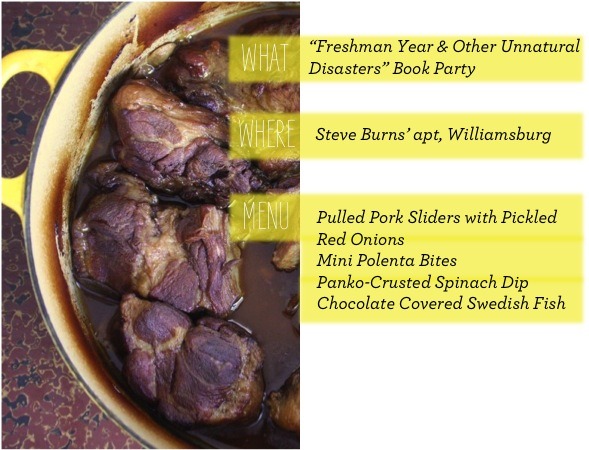 I know what it’s like to throw your own book party. Last May, Cara and I spent a week making hundreds of Rice Krispie balls and Mini PB&J cake-witches, and stressing about whether or not people would show up. Throwing a book party is not that glamorous, it’s certainly not that cheap, and unless you drink upwards of 5 vodka sodas, as I surely did, it’s usually pretty stressful. So when Meredith Zeitlin approached me to do the food for the launch of her new young adult novel, High School & Other Unnatural Disasters, I recognized a fellow first time author in need, and said: let’s do this.

The menu we decided on was a mix of high school favorites – creamy spinach dip, mini meatballs – and more adult-friendly bites, like little polenta cakes with ricotta and truffle honey. But my favorite item, which falls somewhere in the middle of those two vibes, was Pulled Pork Sliders. It’s unclear whether or not the book’s protagonist, Kelsey Finklestein, would have been able to eat pork. But since the young heroine is “loosely” based on Meredith herself, we decided that she definitely would be down with trafe. 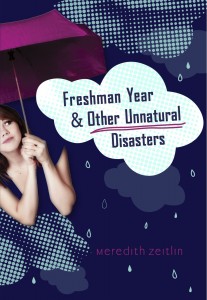 Usually when I make pulled pork, I’ll brine a big 6-pound butt, maybe apply a minimal spice rub, and then slowly cook it in the oven, at a low temp, for up to 5 hours. At a prior event, where I served these black bean arepas, I tried David Lebovitz’s recipe for carnitas for the first time and was blown away by the results. It’s a few more steps than my usual pulled pork, but totally worth every spatter of pork fat on my stove-top.

Naturally, I decided to go this route for Meredith’s pulled pork sandwiches. And as predicted, whether stuffed inside a mini brioche or a corn tortilla, topped with pickled red onions or salsa verde, these carnitas rock my world every time.

As far as the party was concerned, I was grateful that the only unnatural disaster occurred long before I even arrived, when Meredith was served a $250 dollar traffic ticket en route from the liquor store to Steve’s house. The rest went surprisingly smoothly, especially for Steve’s dog (we’ll just call Blue-in-training), who may or may not have eaten several brioche rolls out of my bag as I was unloading. It might also be worth mentioning that this dog has a sweet sweet life, as he lives in the sickest doghouse I’ve ever seen.

If you happen to be a fellow first time author, or a tween, or just someone who’s looking for a very witty, hilarious book, full of epic high school moments and cringe-worthy nostalgia, then consider picking up a copy of Freshman Year & Other Unnatural Disasters. If you’re in the second camp, hang in there, and nicely ask your mom to make you some carnitas STAT. 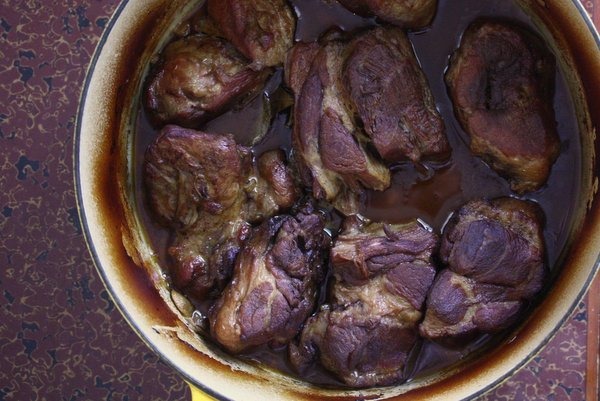 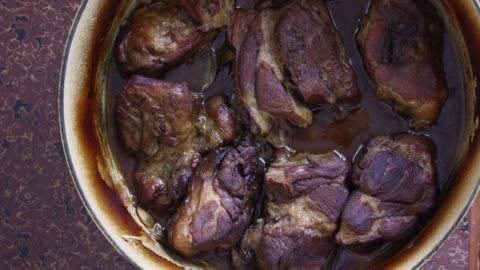