These easy oven baked ribs start with a store bought gluten-free BBQ sauce, but get leveled up by three key ingredients: green chile, cilantro and ginger. 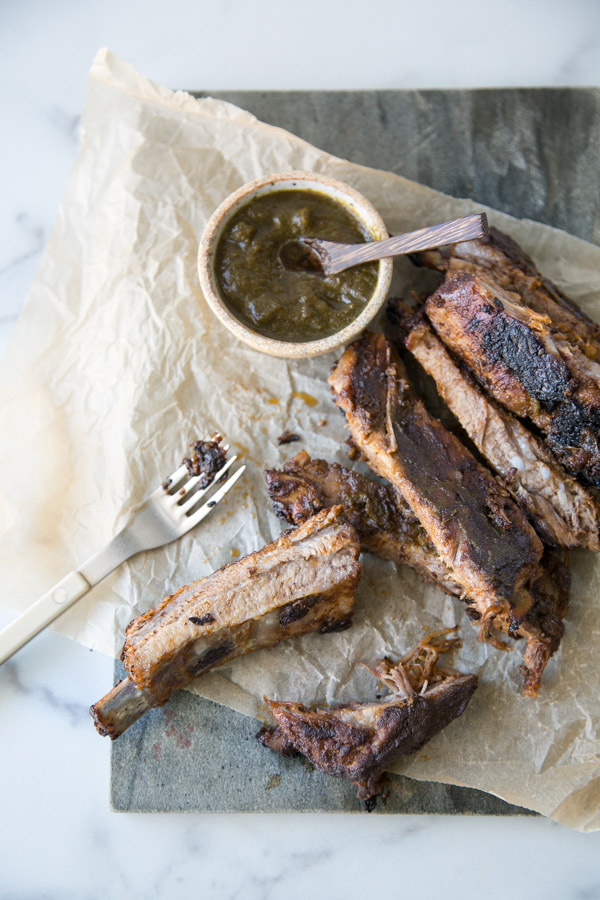 It feels like yesterday that I discovered these ribs, but I’ve actually been making this recipe for 10 years! Even though they are baked in the oven and delicious year round, I will always think of summer thanks to the recipe’s humble origins in my 20-something cooking rotation.

I used to hate the Hamptons, but my friend Kate always managed to drag me off my high horse (bound for the vineyard) a few times a summer. When I was in my early twenties, this was always to a ramshackle share house. As we got older, the houses got nicer as the ratio of 24-year-olds to beds decreased. Eventually, there were no 24 year olds at all. And now there are just 2 and 4 year olds, who still somehow manage to be less destructive than we were in our prime. 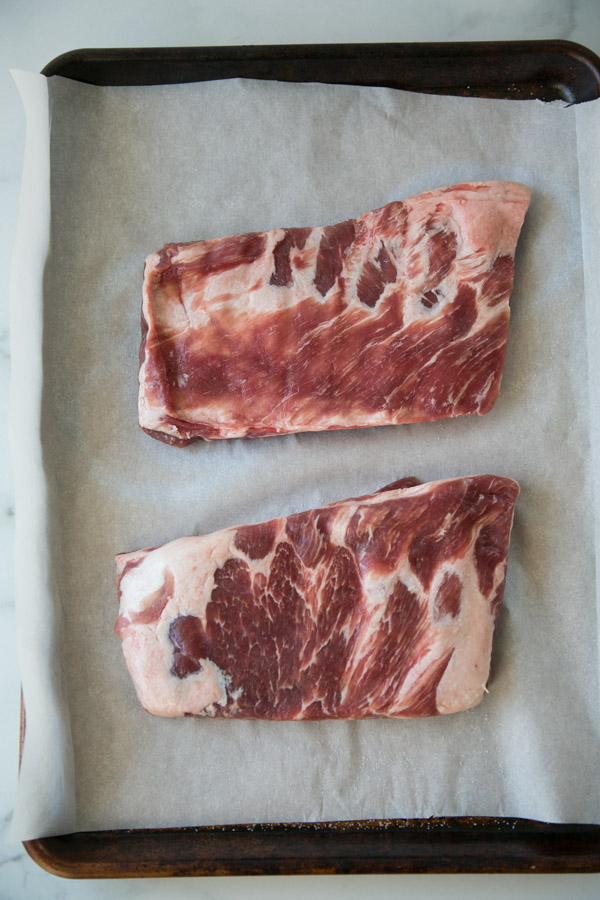 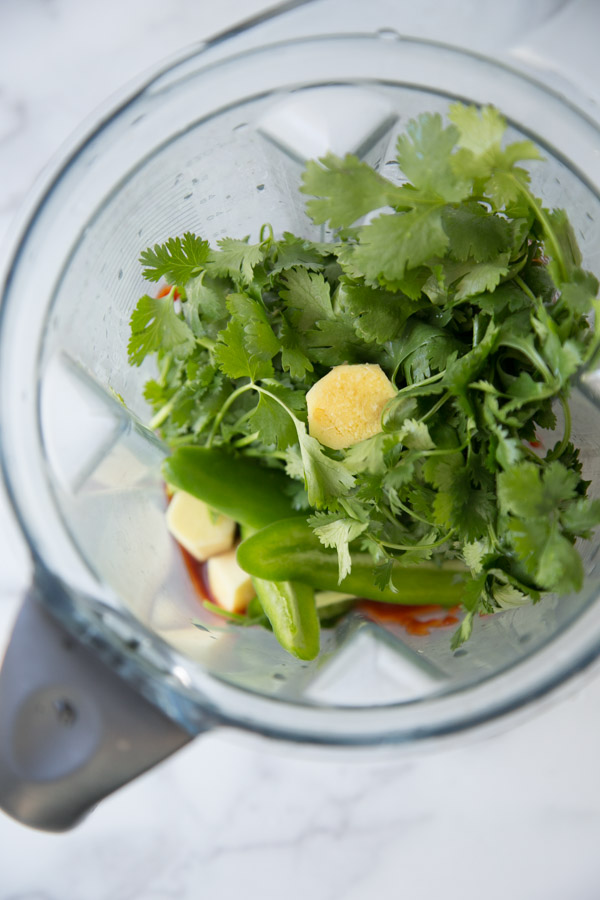 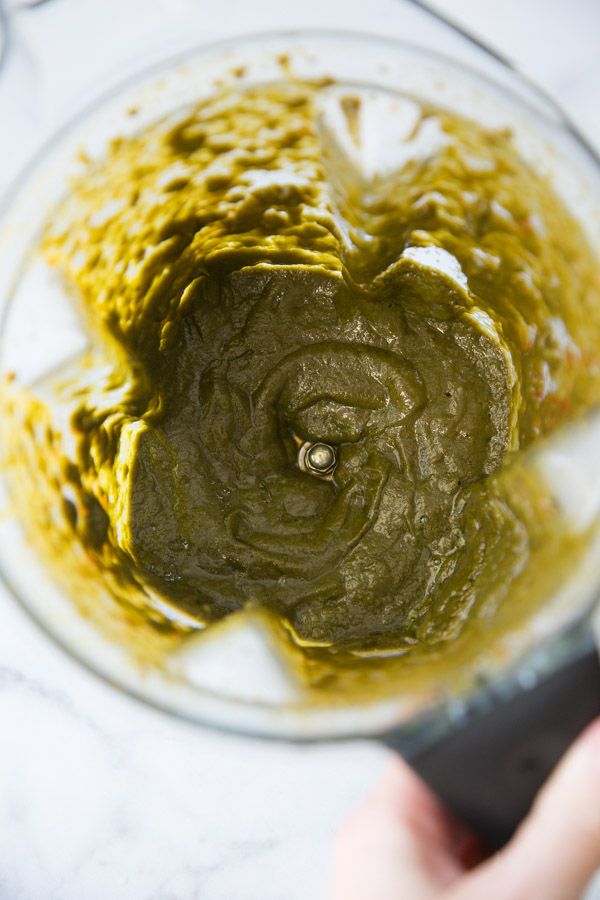 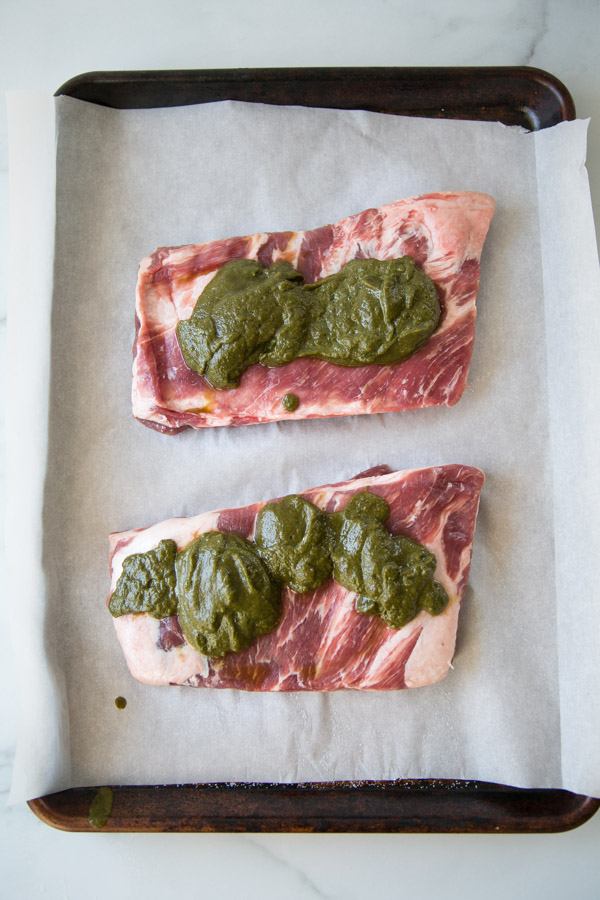 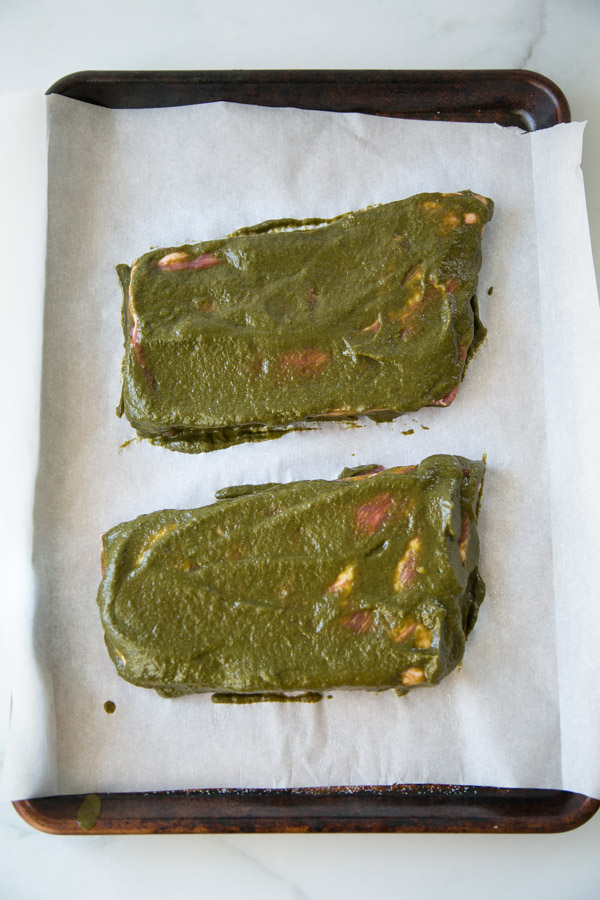 Back in the old days though, cooking at the share house was a bit of a nightmare. There is an infamous story of one particular 24-year-old almost burning down the house by trying to make a grilled cheese directly on the electric stove burner. She clearly did not realize that the house was not outfitted with an industrial sized George Forman cooktop and that perhaps a pan was required. But despite these dire scenes, one culinary miracle managed to rise from the ashes of Kate’s share house kitchen (one that did not smell like burnt Velveeta). And that my friends, is this oven baked ribs recipe with cilantro BBQ sauce.

My friend Graeme’s mother invented the glaze, and the magical flavors that emerge are predicated on using run of the mill store bought BBQ sauce as the base. I’ve since tried making it with something more upscale and she’s right, it just muddles the nuance of the finished product. My high horse has since been turned out to pasture. 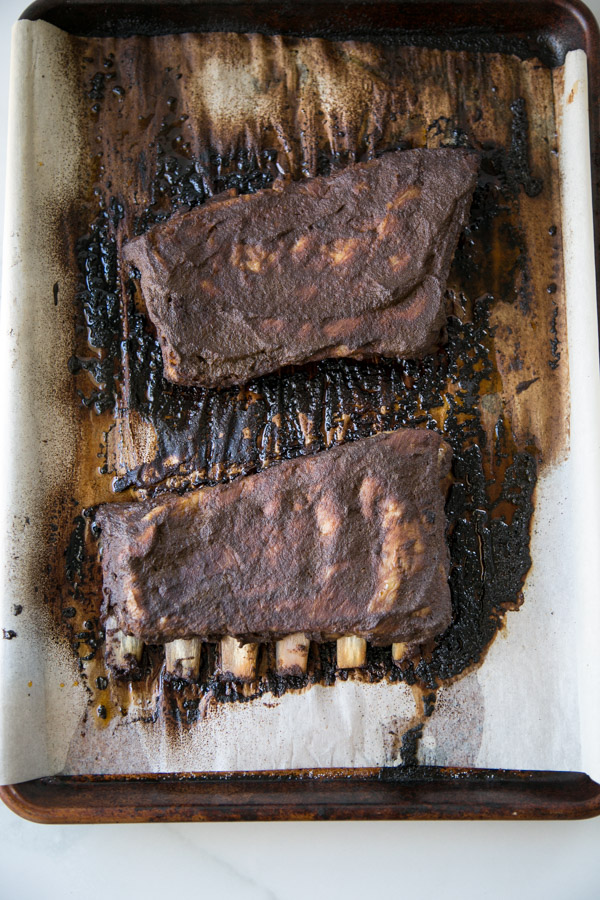 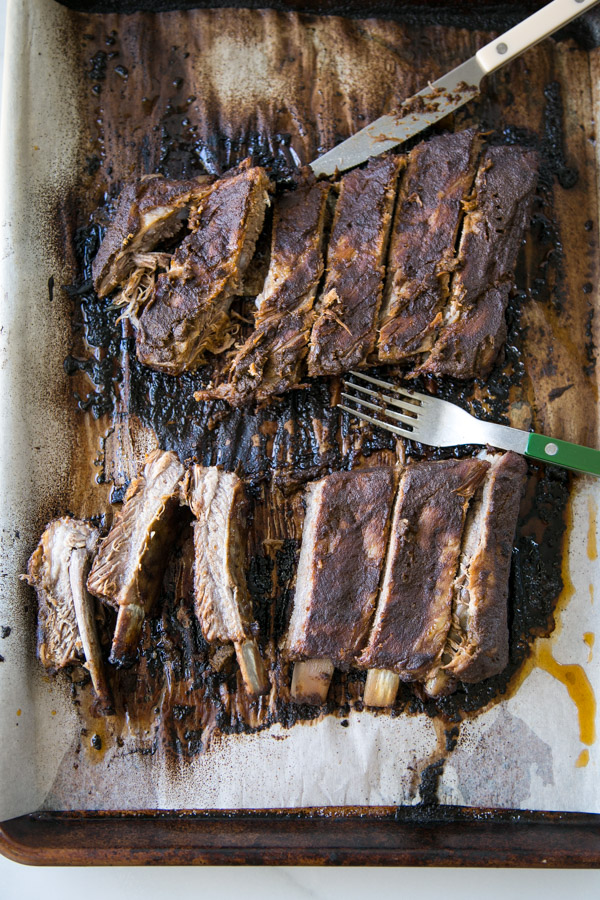 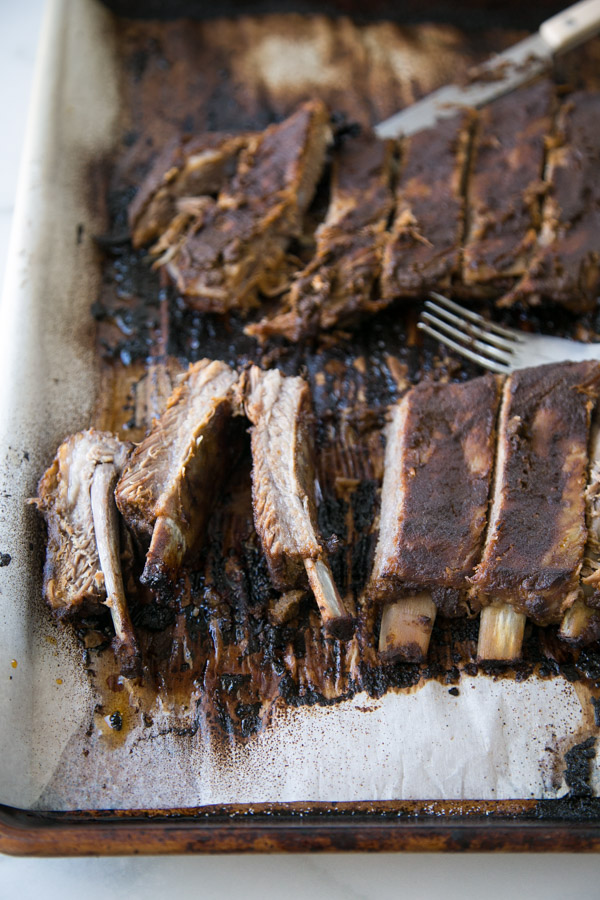 The rest of the equation is simple, which makes it perfect to have in your back pocket for a summer BBQ when you’re feeding a lot of people. Puree the bottled sauce (gluten-free and low FODMAP, if that’s a concern) with a whole jalapeno, a knob of ginger and a bunch of cilantro. And there you have it.

I’ve used Graeme’s BBQ sauce on all sorts of things – burgers, chicken, pork – but my favorite execution will always be the way I first tasted it, slathered all over a rack of baby back or St. Louis style spare ribs that slowly melt away in the oven. Now almost 10 years since the original discovery, I’ve made them on so many summer nights when I had friends out to my preferred bougie beach vacation spot and was told that they were the best ribs anyone had ever eaten. I even converted Charlie’s family to having ribs for Christmas eve, and these were the ticket then as ever. 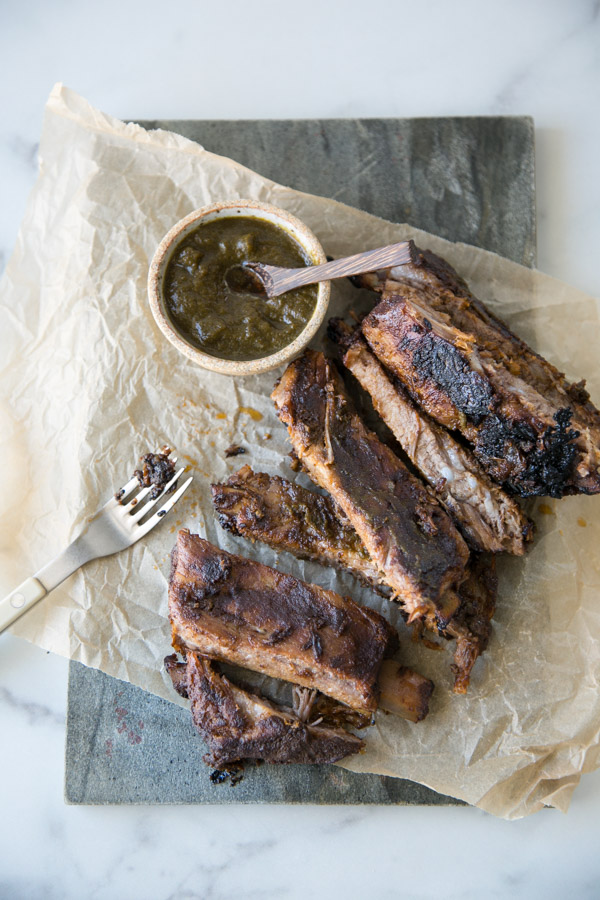 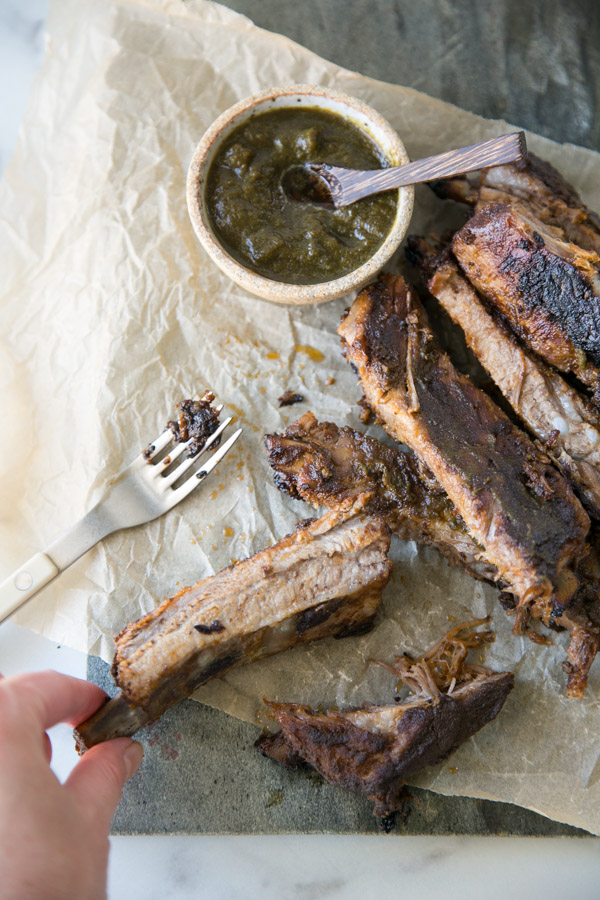 You can of course start these in the oven and then finish by crisping them on an open charcoal grill. But even in summertime, I love how hands off the oven baked ribs technique is.

If you’re looking for an easy July 4th treat to round out the burgers, no matter what the ratio of 24-year-olds to couch cushions, I’d highly recommend whipping up a batch of green chile cilantro BBQ sauce and giving these ribs a whirl. 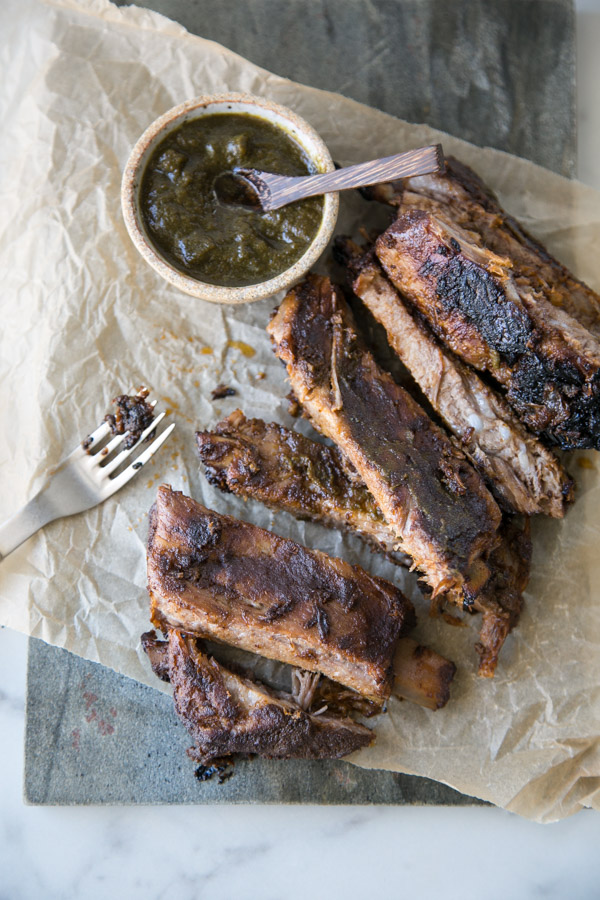 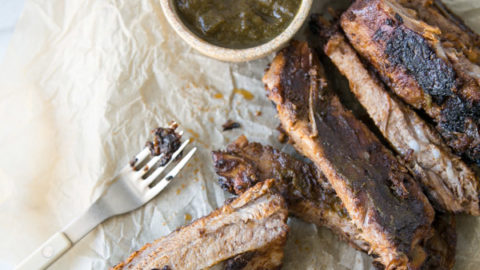 No ratings yet
print recipe
The oven baked ribs get a little help from a gluten-free (or low FODMAP) store bought sauce, but the added ingredients really turn it into something special that you can’t get at a store. I love this sauce to have some heat to it, so I leave the seeds in the jalapeno. You can choose how hot you’d like it and opt to remove the ribs and seeds. Baby back ribs and Sst. Louis style spareribs both work well. And if you want to make more ribs, the sauce will stretch. No need to double it!
Prep Time 5 minutes
Total Time 2 hours 30 minutes
Servings 4
Author Phoebe Lapine

If you make this, tag @phoebelapine and #feedmephoebe - I'd love to see it!
97 shares