My friend Serena is the queen of the quinoa bake. She is to QB’s as I am to CRC’s (chicken and rice casseroles), a bevvy of ideas and deliciousness that spans an array of cuisines and concepts. 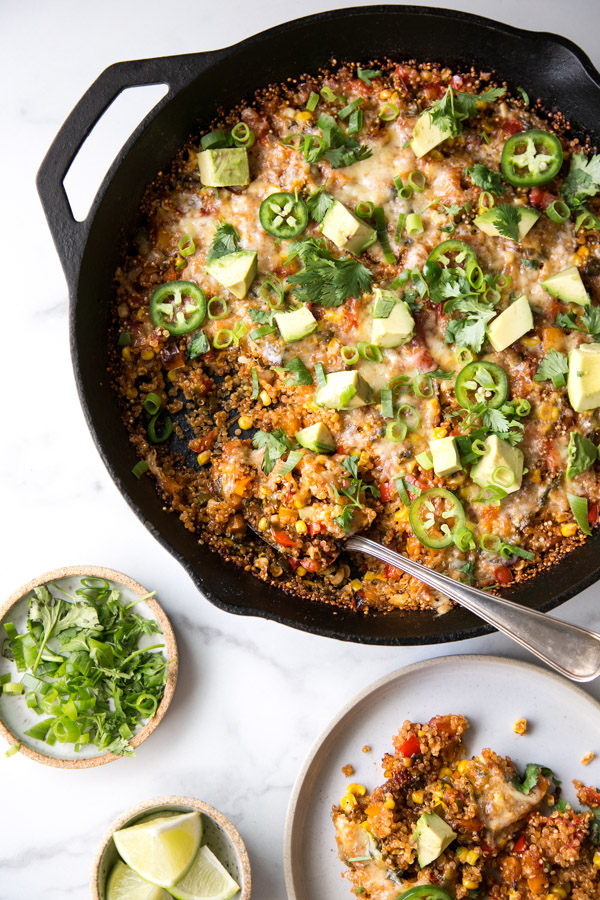 For this reason, I’ve mostly followed her recipes over the years and not left too much up to creativity and chance. That is, until recently when, with her blessing, I decided to go rogue with a new technique for this quinoa enchilada bake recipe.

Serena’s quinoa bakes, and similarly, most of the quinoa enchilada bake recipes I came across, begin with cooked quinoa. If you don’t have any leftover in the fridge, this means dirtying a second pot and starting the recipe process a little earlier. Having made the bakes this way for years, I can say that it’s no big thang. 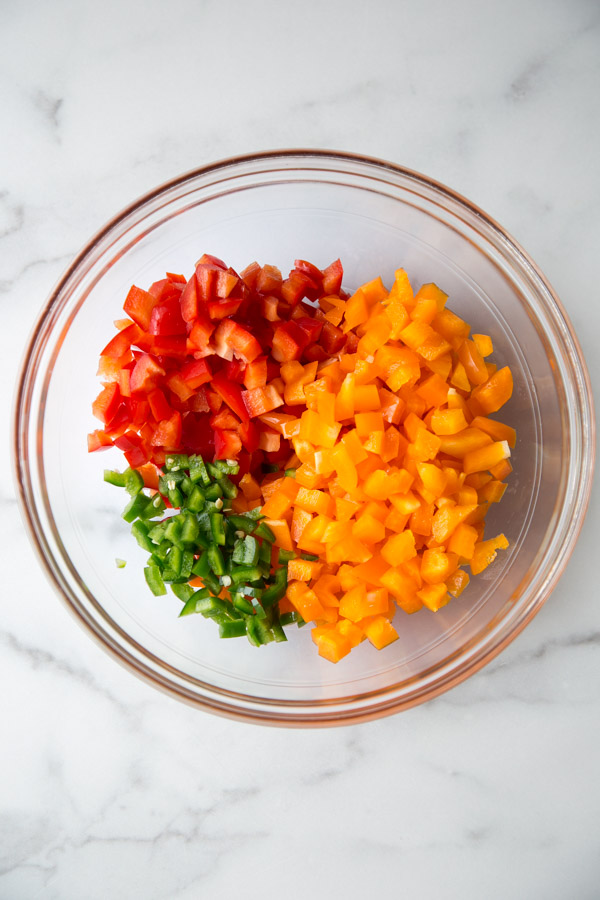 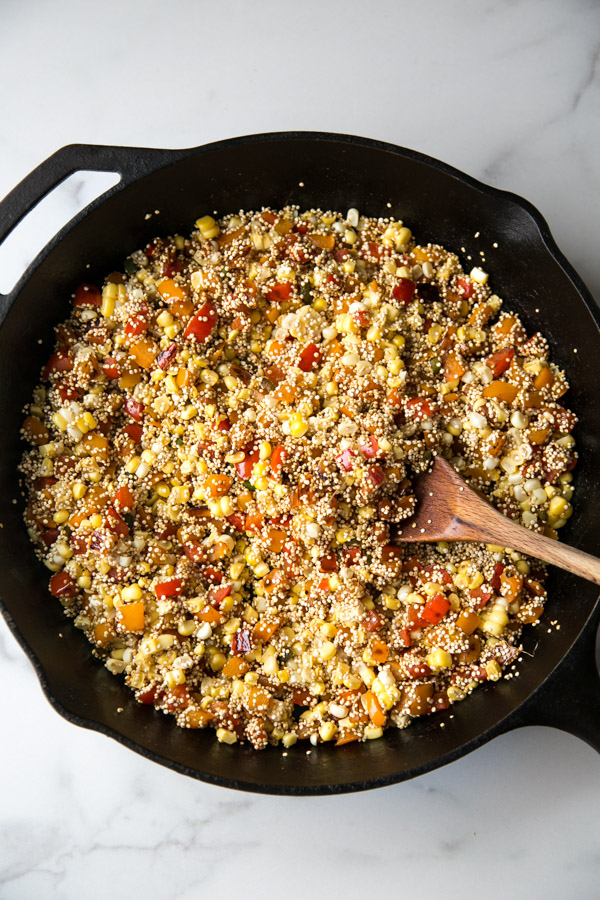 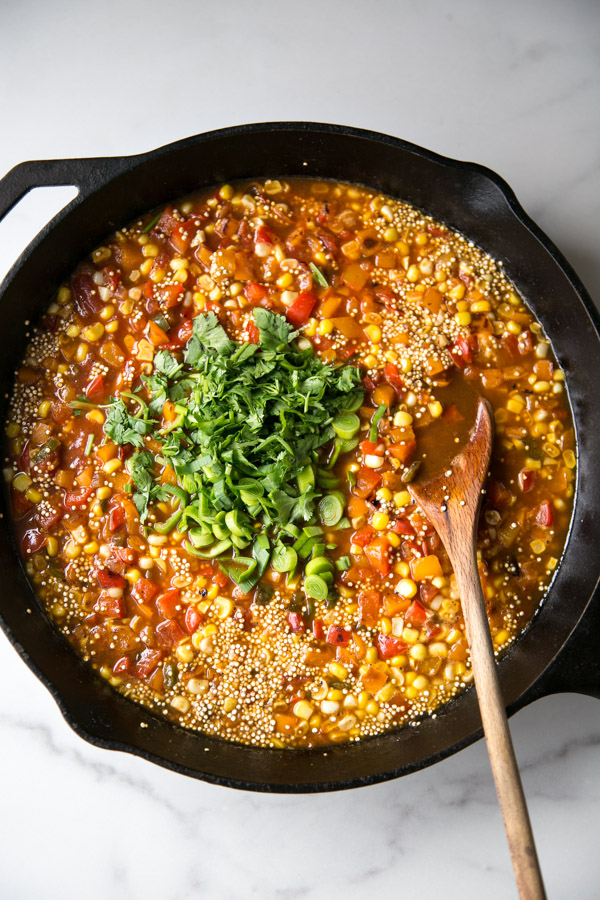 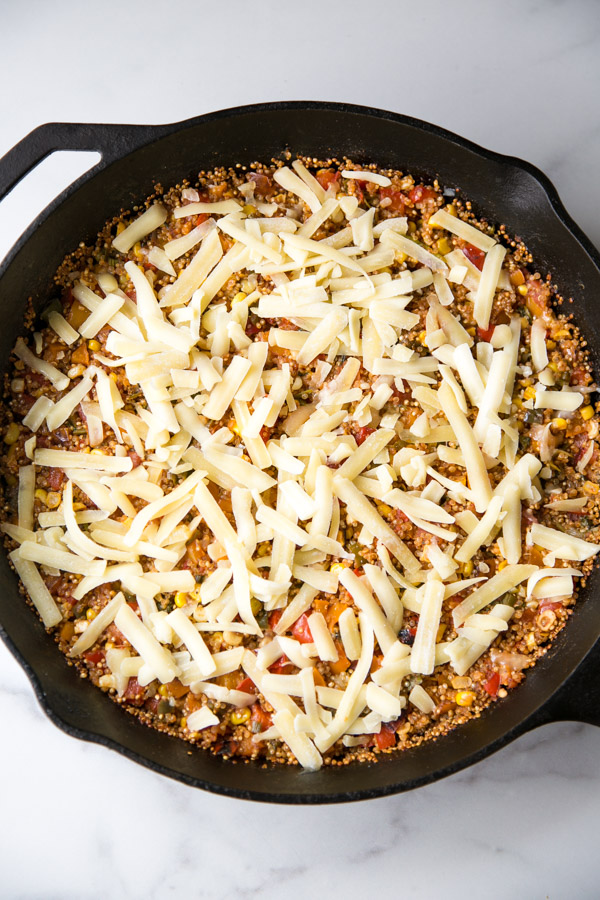 But since I am known for profound laziness and a mild dirty dish allergy, I had to wonder…what if this could all be done in one pan (like my quinoa paella recipe)?

I had to text the queen to make sure she hadn’t already tried this variation with dismal results. She had not, and urged me to report back.

Armed with her enthusiasm, I went forth and, dear reader, succeeded.

Since this quinoa enchilada bake is low FODMAP, I started by sautéing assorted bell peppers and jalapeno. Similar to a pilaf or paella, I then mixed in the dried quinoa and spices, along with a LF quantity of fresh corn kernels. Once the grains had been toasted slightly, I added the liquid: in this case stock and SALSA! 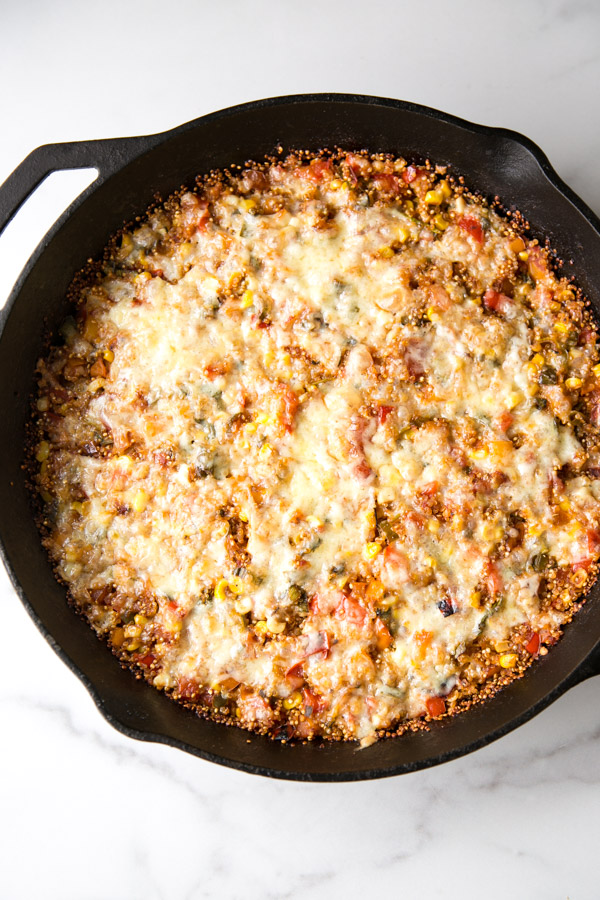 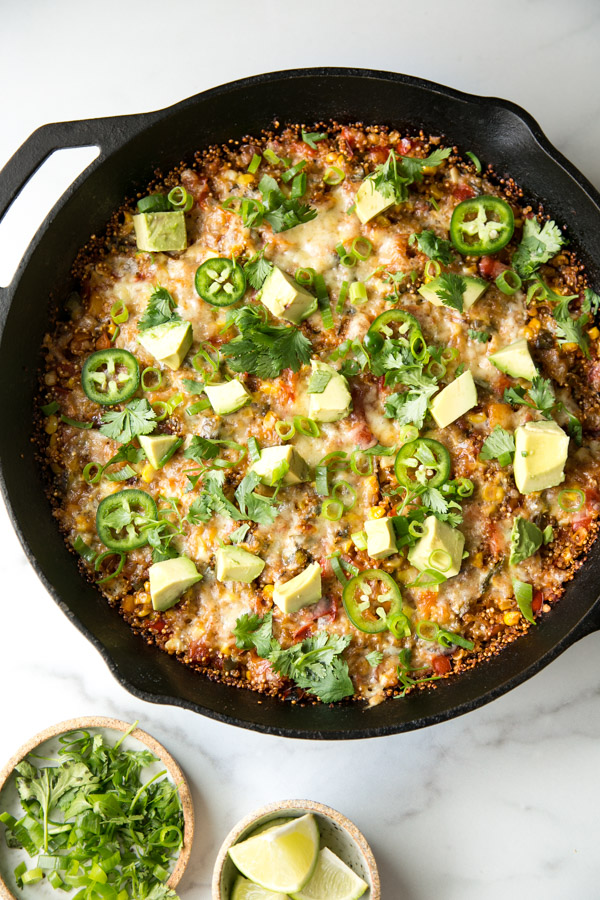 The bake is then transferred to the oven where it simmers until the quinoa is cooked through in the middle and slightly crispy on the sides. You’ll notice that the recipe calls for more liquid than you might ordinarily use for quinoa, but that’s because the grains cook uncovered and a lot of that moisture evaporates instead of getting incorporated into the seeds as they plump. By that same token, when you take it out after 25 minutes, you may notice that some of the seeds on top appear uncooked. Simply fluff the mixture and redistribute with a spoon. Or if you want to embrace the crunchy top and sides (like a socarrat) just add the cheese and return to the oven!

If you want to start with cooked quinoa, you can simply skip the broth or water and combine the quinoa with the remaining ingredients off the heat once the veggies are sautéed. You can also bake the casserole fully assembled with cheese on top for a full 20 minutes.

The topping includes just a modest amount of cheese in order to comply with the low FODMAP diet, so feel free to go crazier if you feel so inclined, or swap for plant-based cheese for a vegan / plant-based version. You can also use any type of salsa you like. I used this LF brand for salsa and stock. 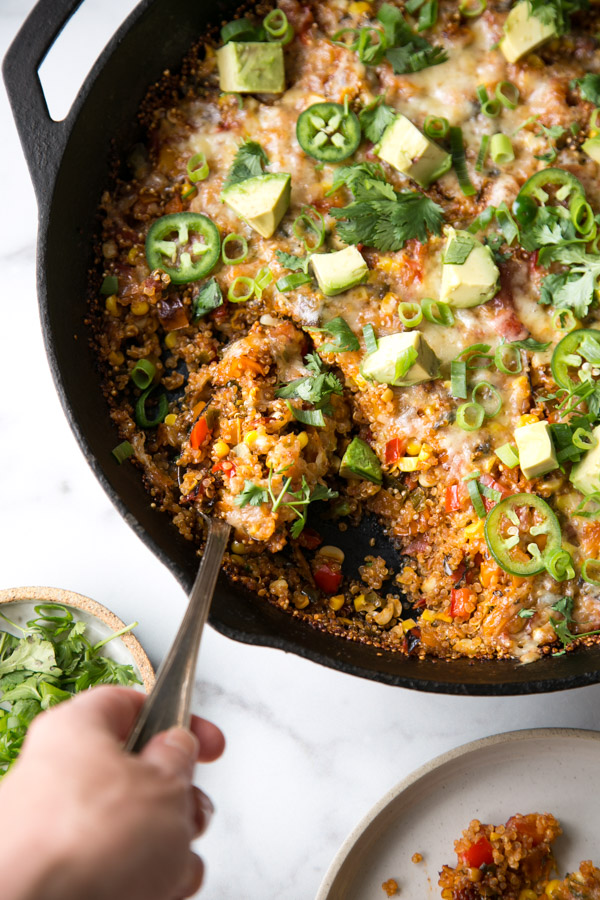 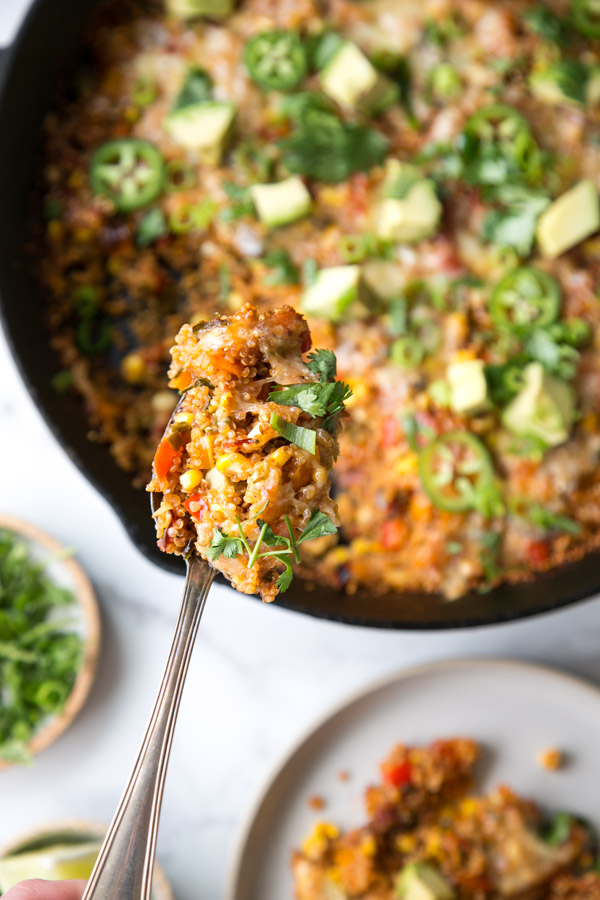 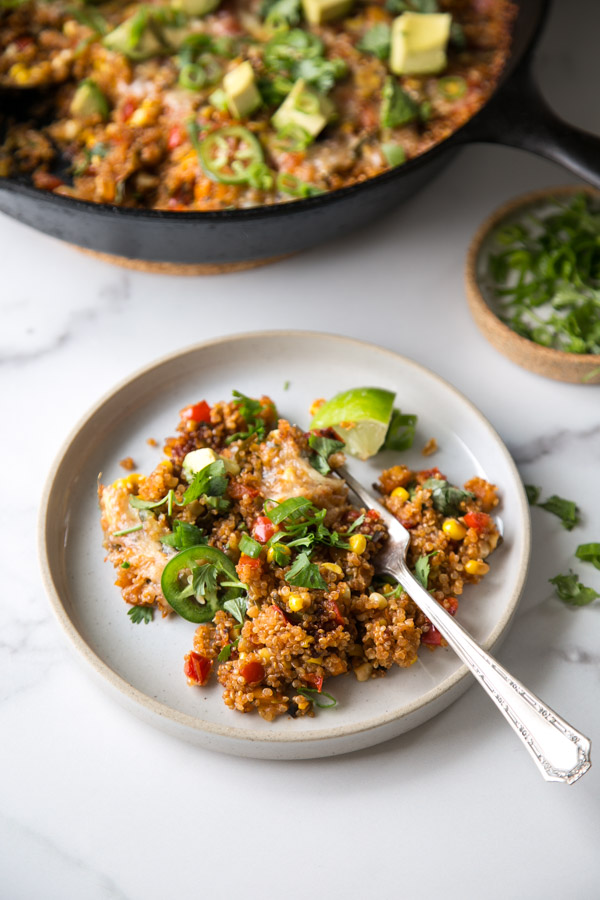 Finally, get creative with your toppings. 1/8 of an avocado is low FODMAP, so I’ve included half of a diced one on top, along with some cilantro, scallions and sliced jalapeno.

Read on for this one pan quinoa enchilada bake recipe that’s gluten-free, low FODMAP and easy! 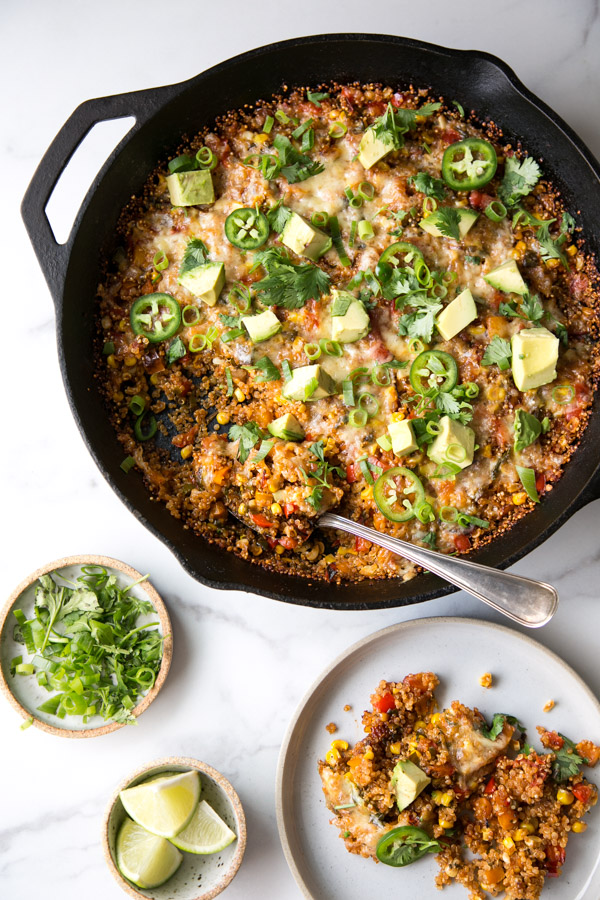 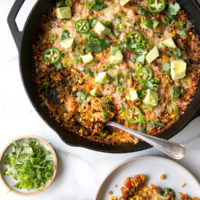 5 from 5 votes
Print Recipe
This quinoa enchilada bake recipe is very versatile. If you don’t have low FODMAP salsa on hand, you can use tomato sauce. If you’re not low FODMAP, feel free to use any type of salsa you like! Other optional garnishes: more thinly sliced jalapeno or pickled jalapeno, lactose-free yogurt or sour cream. Feel free to swap nut cheese to make this vegan.
Prep Time 10 minutes
Cook Time 30 minutes
Servings 4
Author Phoebe Lapine

If you make this, tag @phoebelapine and #feedmephoebe - I'd love to see it!
706 shares