My house husband and I have different ideas around what type of wine should be used to cook with. 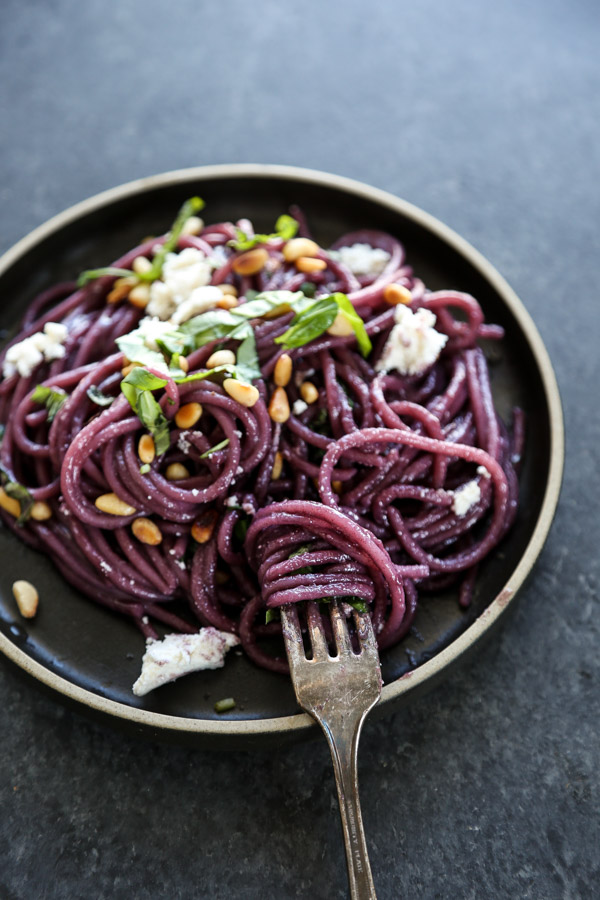 A dedicated student of my culinary teachers on Food Network, who I’ve been learning from since long before I was of legal age to drink wine, I’ve always tried to use something that I’d actually want to drink. Not top shelf, but not $5 buck chuck either. There are a few brands that I like for these purposes (this and this, being two). But the general problem is that my POC does not stock much in between special bottles and swill.

The hoarding became evident during our move, when we filled five boxes just with wine and liquor.

Last year, I tried to tackle the subject of alcohol pantry purging head on. But when it comes to adding any quantity of our wine collection to cooking, even if it’s just a splash, I’m usually met with a look of horror. It seems Charlie would rather stab me in the eye than pour a measly 1/4 cup of our Scribe subscription into the steak skillet to make a pan sauce. And that has been an on-going source of conflict for someone who drinks sauces as readily as wine, and has access to a few steak knives of her own. 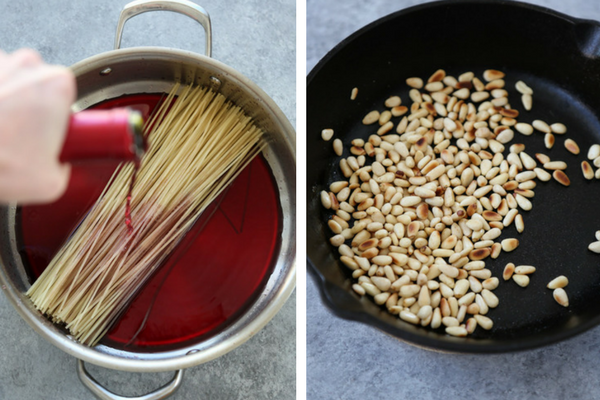 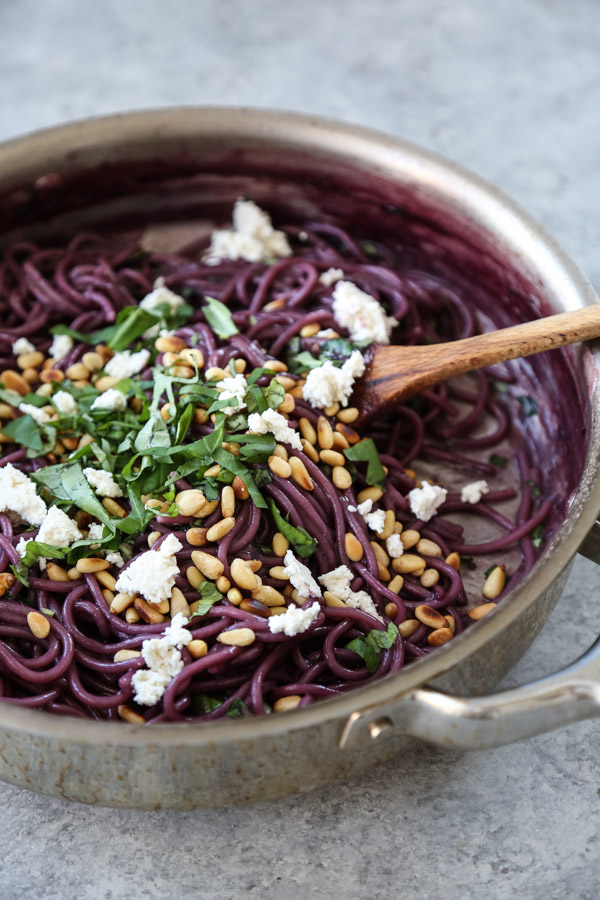 If there was any dish that might change his mind about how complex and interesting cooking with wine can make your food, and by extension what you drink in stemware right beside it, I knew it would be this red wine pasta recipe, which I adapted from Ali Rosen’s brand new book baby, Bring It!

Ali, in addition to being an extremely talented producer and host of food television, is also a potlucking pro. The book is filled with interesting, vibrant and healthyish options for serving a crowd, along with portability tips on how to get her food on a (sometimes faraway) table.

As you now know, I trust these on-air food pros with my life. But not enough to risk depleting an entire bottle from Charlie’s arsenal in order to make pasta. Instead, I ordered a respectable $12 bottle of wine, and got cooking. 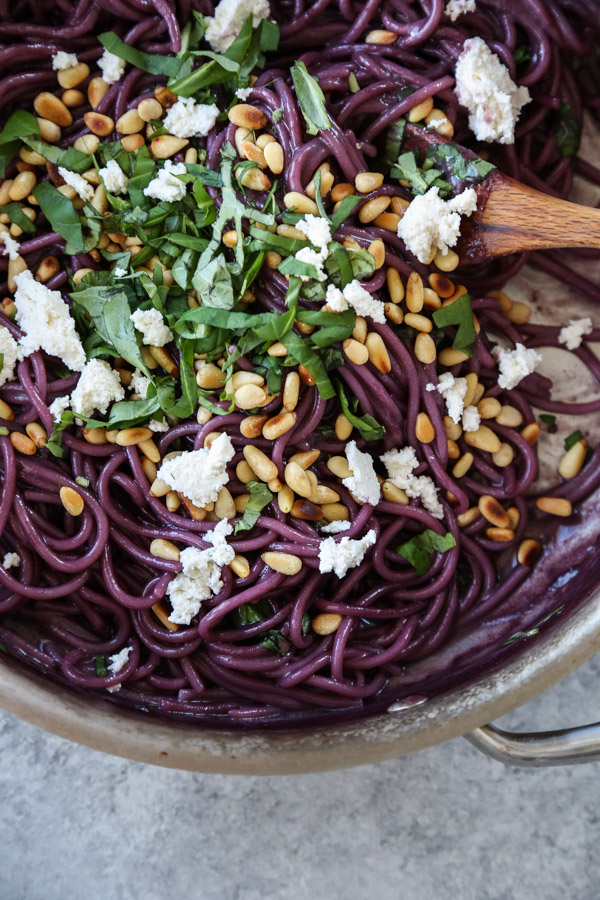 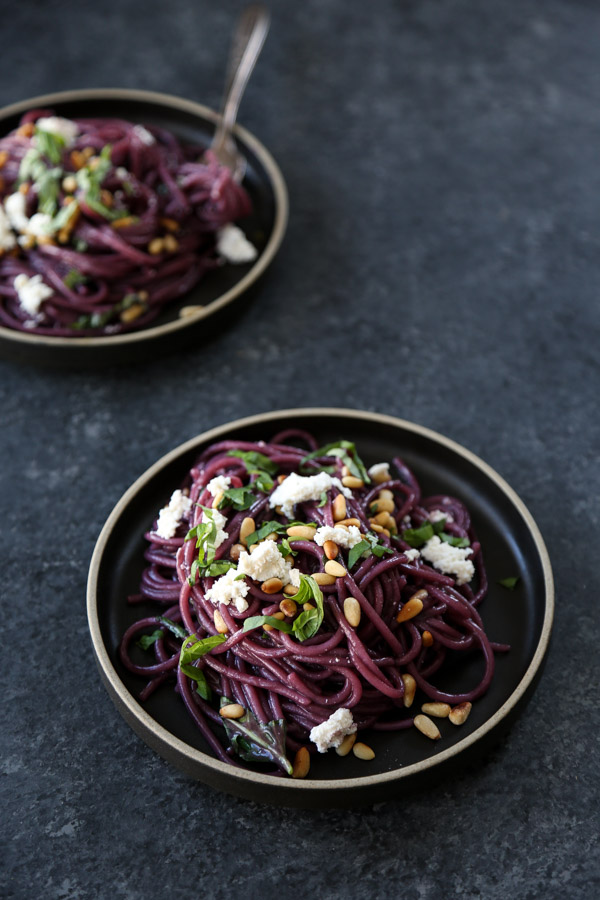 The technique for this red wine spaghetti dish is a cross between a pasta and risotto. Since there’s less liquid than usual, it requires a shallow pan wide enough to fit the spaghetti instead of a tall pot. The pasta soaks up the wine as it cooks and you have to use a sense of feel, adding more liquid as necessary so that there’s still a little bit of sauce leftover at the end once the noodles are tender.

I accidentally misread the recipe and added the pasta and the wine together at the beginning. It worked out alright, but took much longer for the liquid to boil. So I’d recommend actually following the instructions and beginning the process like a regular pasta dish with only the liquid. 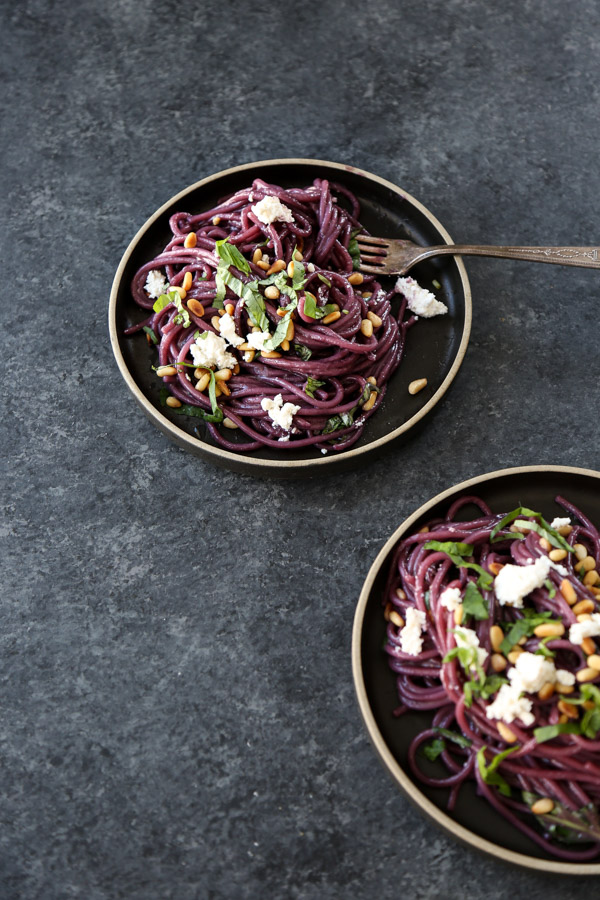 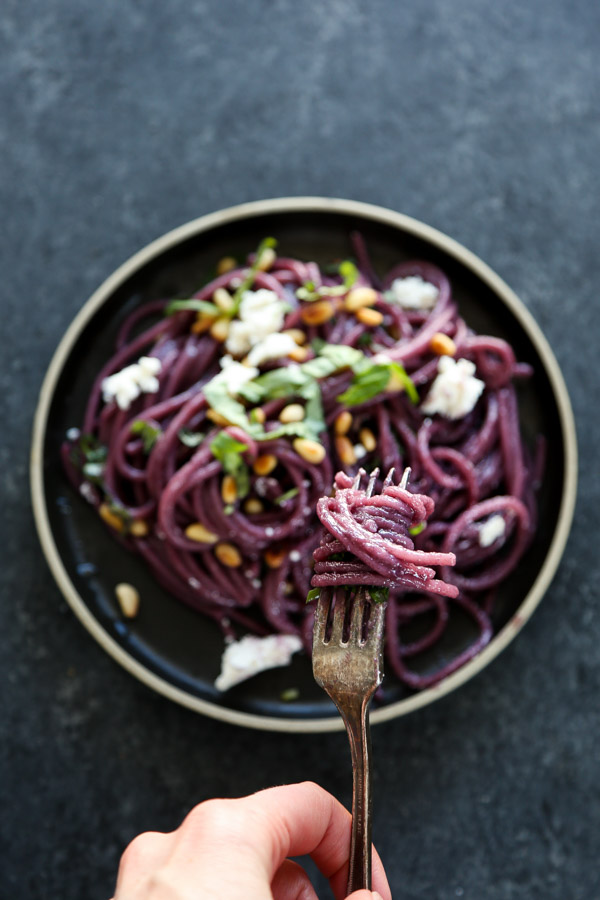 The result is a gorgeous purple noodle with built-in flavor—a great technique to use for cooking gluten-free pasta since it tends to be rather dull and also soaks up more liquid and sauce than normal noodles. To compensate for this, I took the pasta off the stove just shy of al dente and added one last splash of water so there was plenty of sauce in the pan as the pasta cooled.

Instead of butter, which is the other main ingredient of the sauce, I used ghee, which was lovely. I also added Kite Hill almond milk ricotta instead of feta to make it dairy-free as well.

I won’t say that the red wine pasta was so delicious that it made Charlie want to give me free reign over his bar cart. But I will say that he’s that much more inclined to stock a few reasonable bottles so that we can easily make it again on the regular. 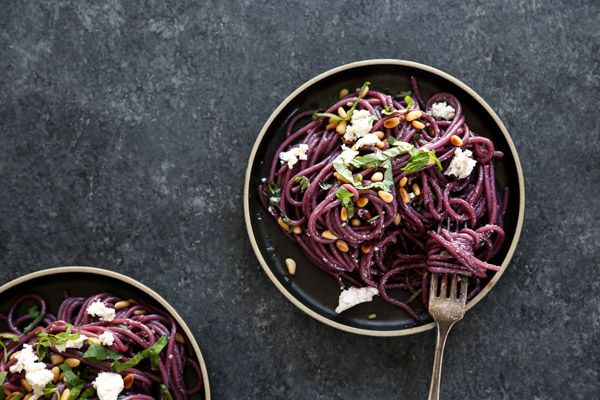 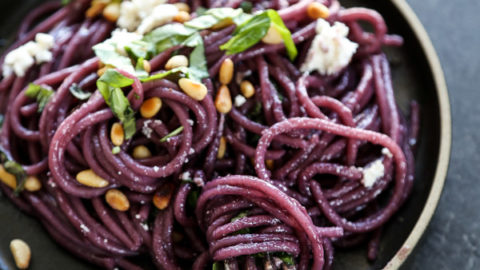 5 from 2 votes
print recipe
This red wine pasta recipe is adapted from Ali Rosen’s Bring It! Gluten-free pasta tends to absorb more liquid than regular, so I used only 8 ounces of pasta for the entire bottle of wine and added 2 additional cups of water along the way. If you’re using regular pasta, up the quantity to 16 ounces as the original recipe calls for. You can omit the garlic to make low FODMAP, which I did and it was still delicious. I also subbed Kite Hill almond milk ricotta for the feta, which had a similarly wonderful tang.
Prep Time 5 minutes
Cook Time 15 minutes
Total Time 20 minutes
Servings 4
Author Phoebe Lapine

If you make this, tag @phoebelapine and #feedmephoebe - I'd love to see it!
1158 shares