It’s officially been a week since we moved, but we spent much longer than that with our kitchen in boxes. Ordinarily, that would have meant takeout. But since my low FODMAP diet makes that tricky, instead it meant sheet pan dinners. 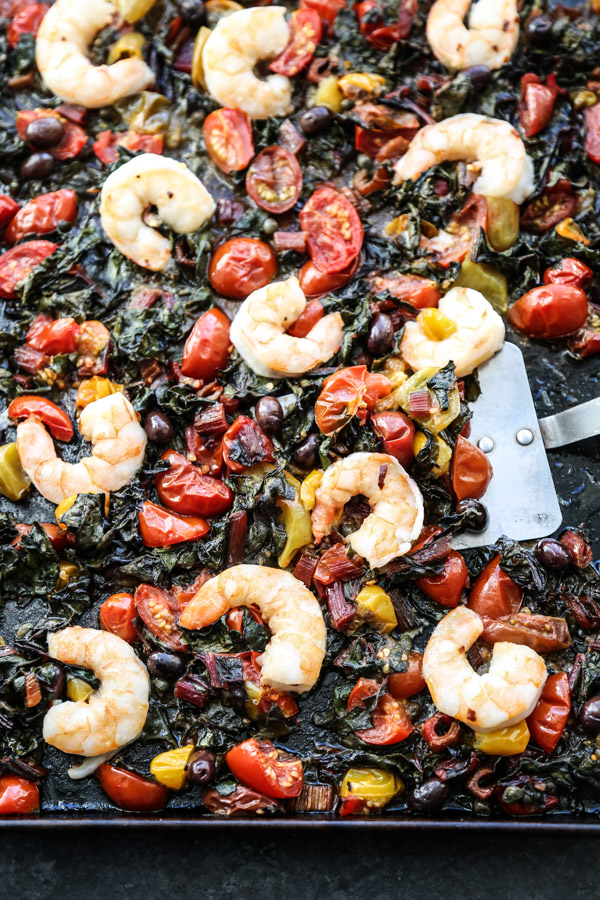 We left only a few things out and at the ready: a spatula, the tea kettle, and this sheet pan, which became the vehicle for all our final countdown meals. Packing up all the other items in the kitchen was at the top of my stress list. But I knew it wouldn’t be nearly as anxiety producing as cleaning out the fridge and transporting all of the half-eaten jars by ourselves.

In preparation for this grand finale, I made a concerted effort to buy as little produce as possible, use it start to finish, and plow through some of those random jars in our sheet pan meals. Because we are crazy green hoarders these days, we ended up taking most of the cleaned jars with us anyway. But at least they were empty! 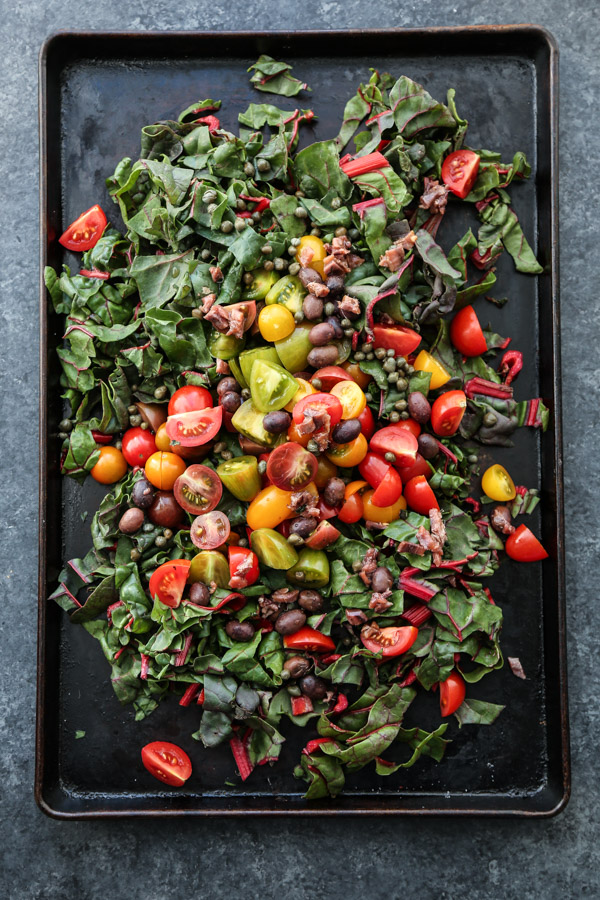 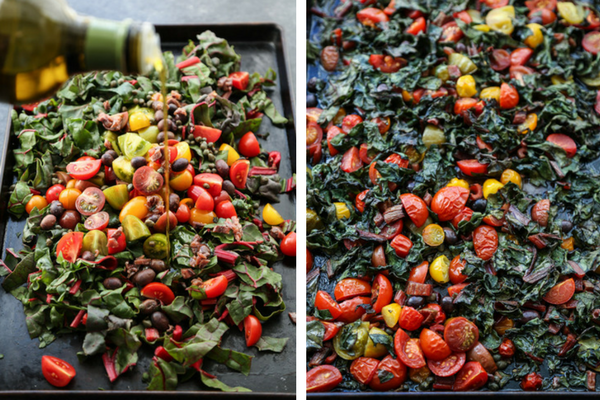 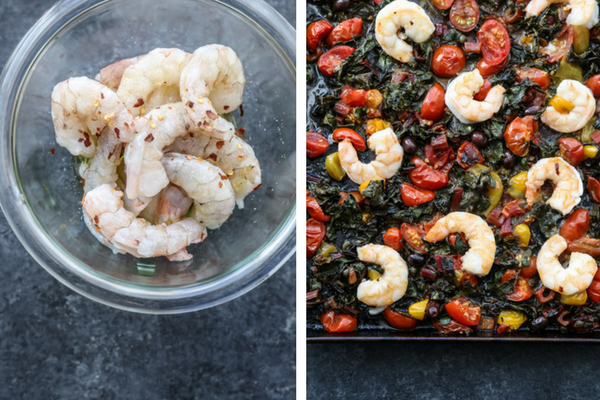 If you’ve read my updated advice on cooking for low FODMAP diets, you’ll know that utilizing the antipasti bar is one of my big strategies for getting around the garlic and onion omission while still packing tons of authentic Italian flavor into my dishes. It also just so happens to be my central strategy for reducing the jars in my fridge and pantry, since capers, olives, and anchovies, tend to take up a lot of real estate there.

To make the dish more of a complete meal, if less of an actual pasta sauce situation, I tossed a whole bunch of red chard in with the tomatoes and topped the mixture with jumbo wild shrimp. When you’re making sheet pan meals with seafood, you have to be careful about cook time and either pair it with vegetables that don’t take more than 10 minutes in the oven, or give them a little bit of time to prebake before adding the protein.

If you love shrimp and want more ideas, check out this low FODMAP shrimp recipe or this shrimp packet recipe that can also be low FODMAP. 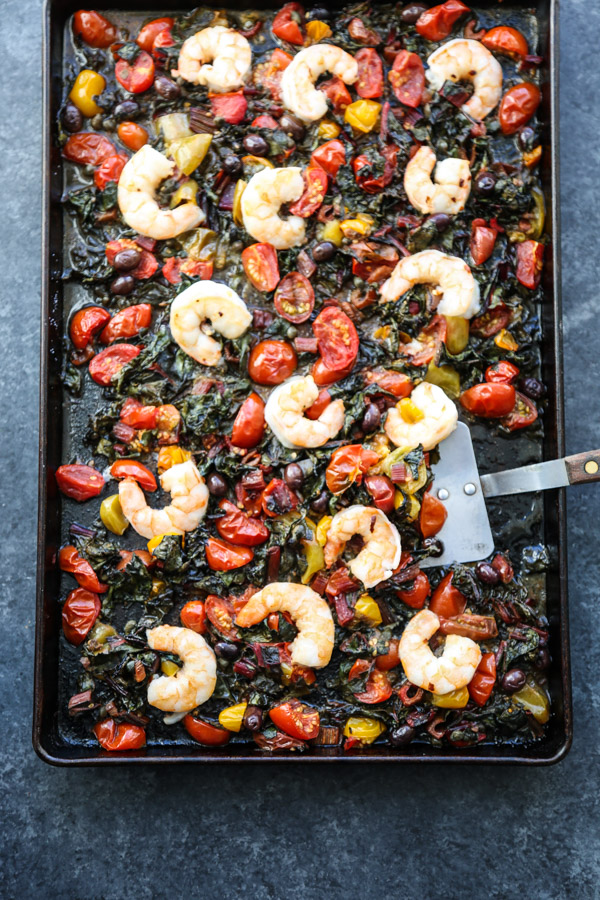 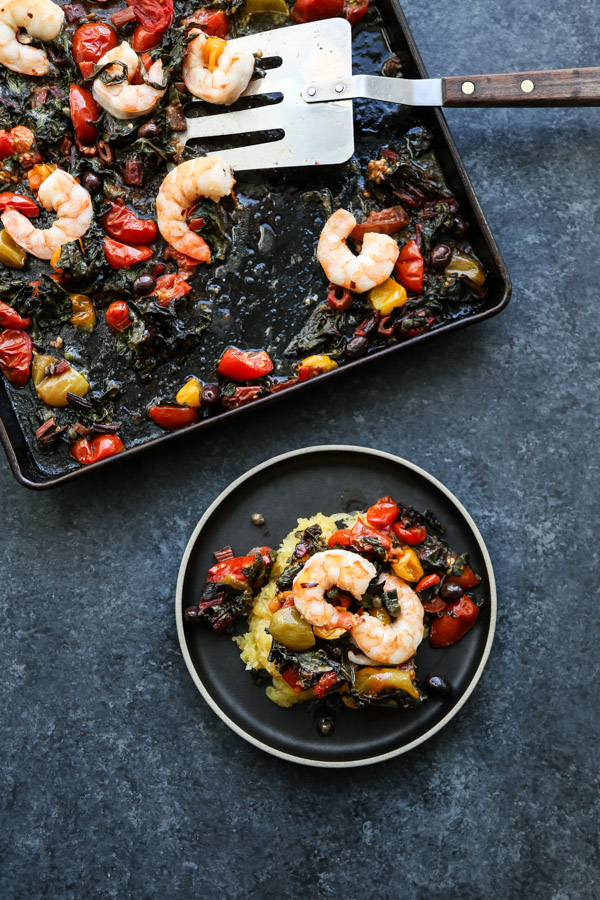 We served this recipe over leftover spaghetti squash, but you can easily use real pasta, so long as you have more than a sheet pan at your disposal to make it with 🙂

This week I’m in major recovery mode. I’m letting my body relax again, I’m getting back into the swing of cooking in a new (highly organized!) kitchen, and I’m exploring some of the local yoga and pilates spots so I can create a new routine going forward. Fort Greene peeps, recommendations welcome! 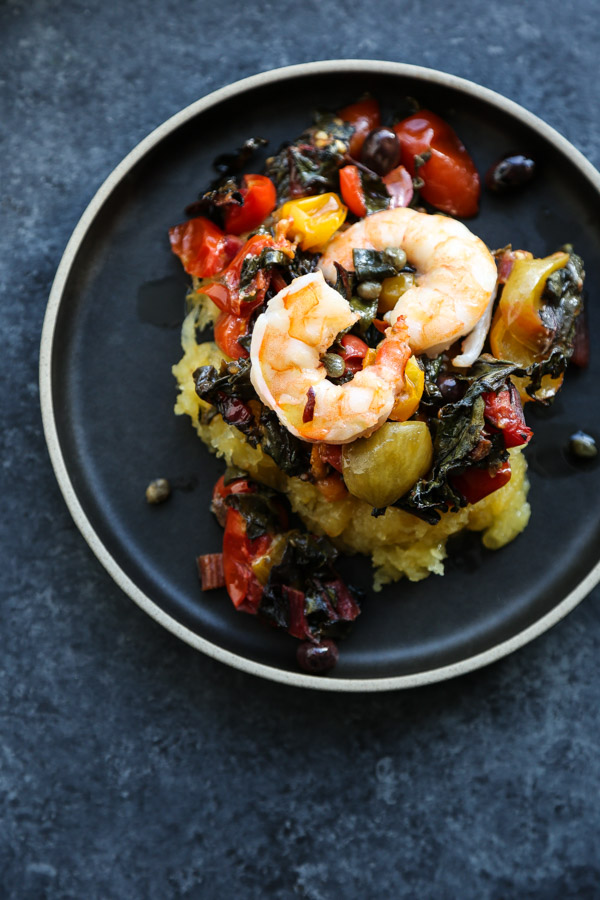 As for the rest of you, I’m going to be talking about SIBO on Facebook LIVE later today (5pm) with Dr. Will Cole! Bring your questions about all things intestines (woot!) and find out more about how a low FODMAP diet works from a medical perspective! 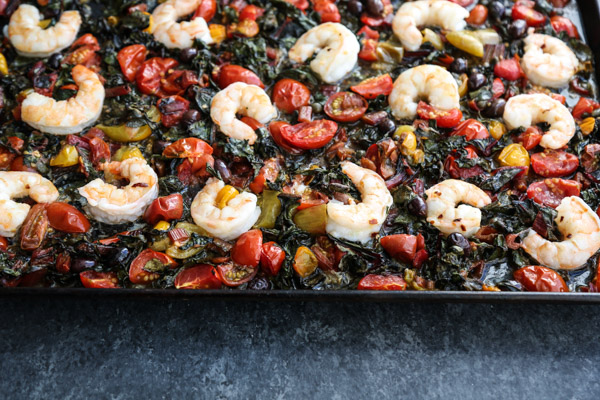 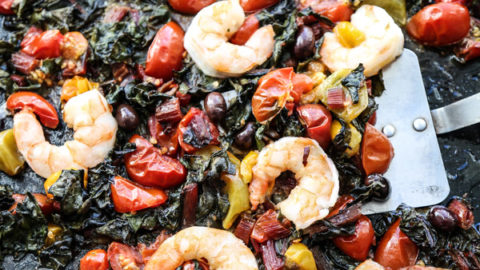 To make this low FODMAP, simply omit the garlic and shallot; reduce the cherry tomatoes to 1 cup or sub 2 large vine tomatoes. I've had it this way, and it remains delicious! I used whole nicoise olives when I made this, because I love the look and don't mind chewing around the pits as I eat. If you're serving this to company, I recommend using pitted olives so no one accidentally cracks a tooth 🙂