I’ve made tons of mistakes on this site with regards to cultural appropriation, but I’m hoping that this shrimp aguachile recipe, adapted from Hispanic Kitchen’s site, can be a positive step in the right direction. 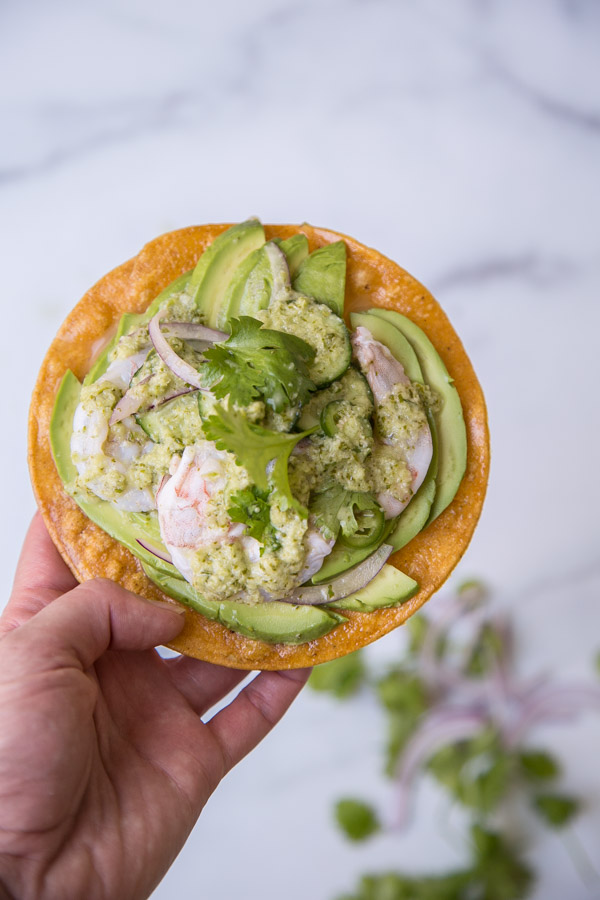 As I’ve mentioned on social media, like many white food writers, I am grappling with my own role in suppressing much-needed voices from other cultures. That suppression happens both actively and passively. Actively, by borrowing ingredients and cooking techniques from various parts of the world without properly explaining their origins, and often times, worse, by bastardizing and whitewashing them. Passively, by playing the SEO game and pushing out authentic recipes written by actual members of that culture.

I’m sure other food media folks can relate, but I feel some pressure on this site to put “my own spin” on a recipe, sometimes adding ingredients that have no place in the authentic version, sometimes “healthifying” it in a way that is, frankly, insulting to the original. If you want to see one of my biggest missteps, you can check out this pozole post, where I was rightfully crucified in the comments section. I didn’t delete the backlash, but I also can’t say I’ve fully rectified the original post. I will slowly be updating my most egregious mistakes in this department, but in the meantime, I would rather not pave over my shameful actions and instead use them as a reminder to myself why all this work is overdue.

I am committed to doing better going forward. 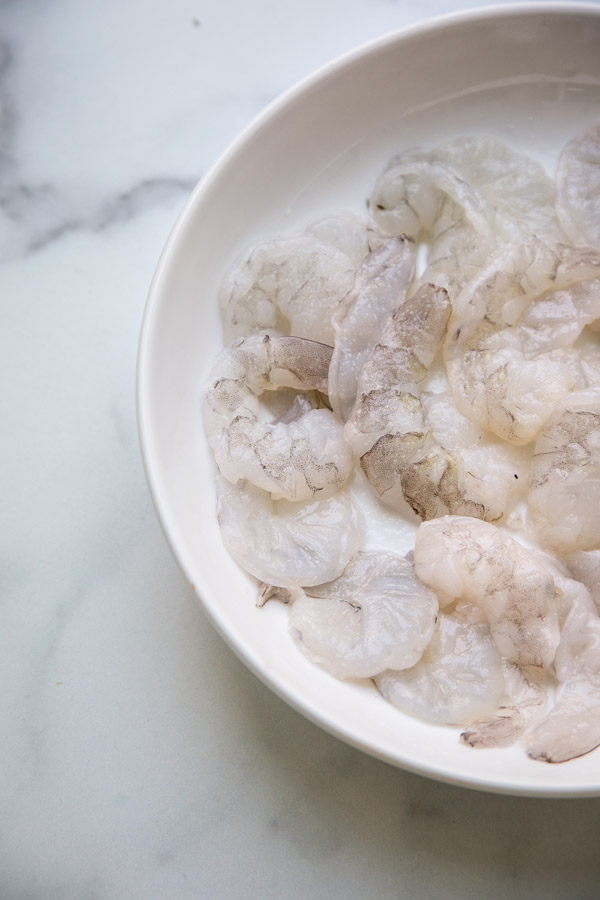 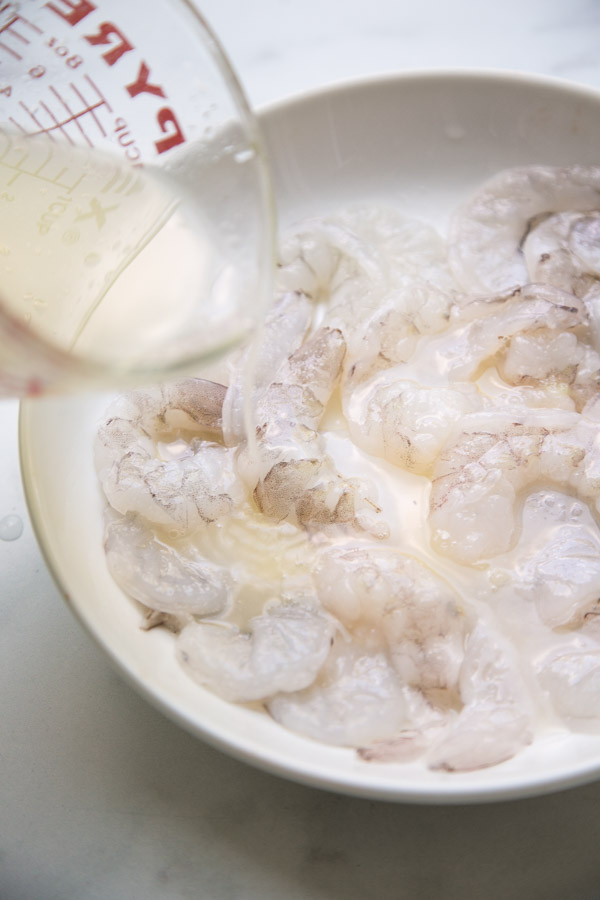 Which brings us to today’s recipe: Camarones en Aguachile. You can find an authentic version, from which I’ve adapted my dish, on Hispanic Kitchen’s site. I mostly stuck to their version and avoided my worst white narcissistic instincts to make it my own. But there were a few tweaks (using jalapeno instead of serrano in the dressing, since my husband is sensitive to heat) that deserve a call out.

Aguachile is from the Sinaloa region of Mexico which is on the Pacific coast. The literal translation is “chile water.” Some versions use thinly sliced white fish, scallops or octopus, but the most common main character is shrimp. Similar to the technique used in Peruvian ceviche, the shrimp first get thinly sliced and marinated in a combination of acid (in this case, lime juice) and salt. This tenderizes the seafood and slowly cooks it the longer it sits. After just 10 minutes, you’ll start to notice your shrimp turning a light pink. 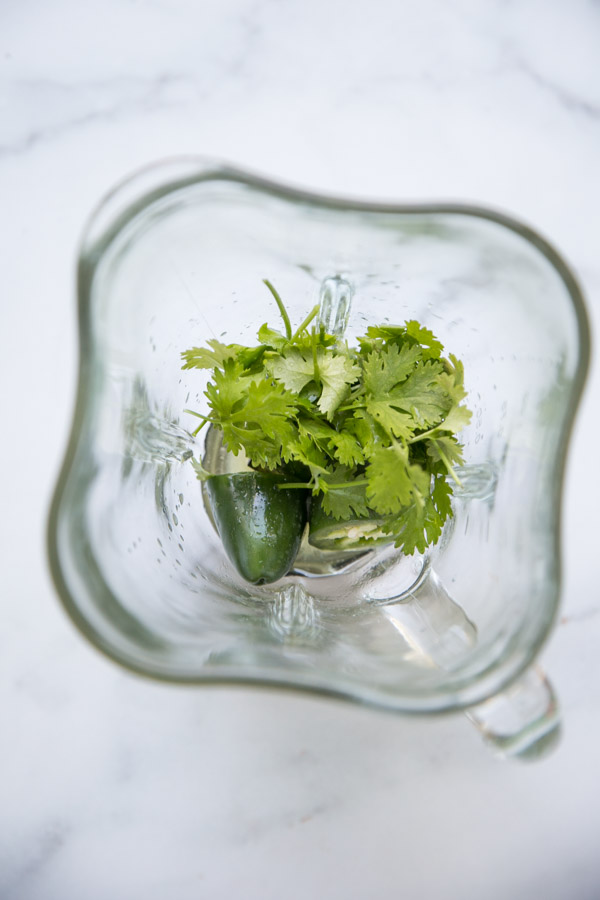 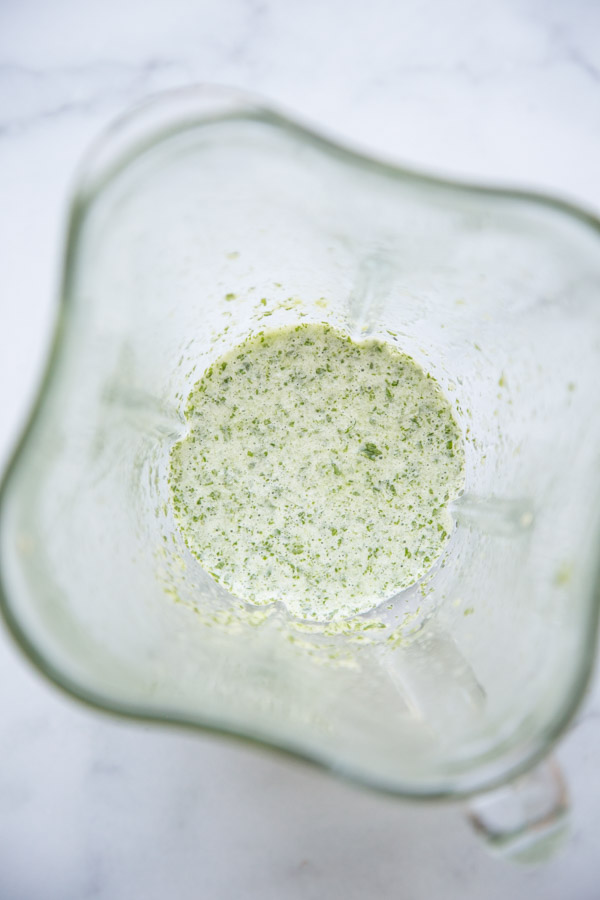 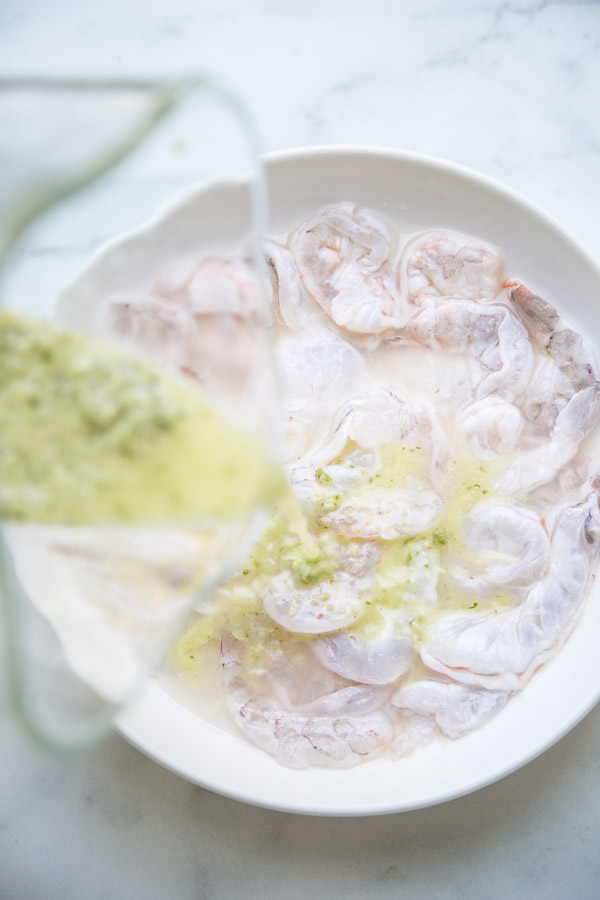 The seafood is then dressed in more lime juice pureed with chiles. Since this is a green (or verde) version, it uses jalapeno or serrano chile peppers and a hint of cilantro. The toppings vary as well, but often include thinly sliced red onion and cucumber. I served mine as a tostada on top of a crispy tortilla with some sliced avocado, but it also tastes wonderful plain if you’re looking for a light (and paleo) summer appetizer. The presentation in a shallow bowl with all the toppings is stunning!

From my limited travels in Mexico, I can say it’s not a dish that’s too hard to find in the bigger cities. I tried aguachile in Mexico City and in Guadalajara and can say that it is delicious any way you slice or top it. As the shrimp sits and softens, it releases some liquid and mellows both the heat, salt and lime juice. If you think to yourself that it sounds too tart or spicy, don’t be dissuaded. And also, make sure that you’re salting more heavily than you ordinarily might.

If you’re looking for more authentic Mexican recipes, I can’t recommend anything produced by Enrique Olvera enough, including his cookbook. And Gabriela Camara is the owner of my favorite restaurant in Mexico City Contramar, which incidentally makes a mean aguachile. You can get her book here. 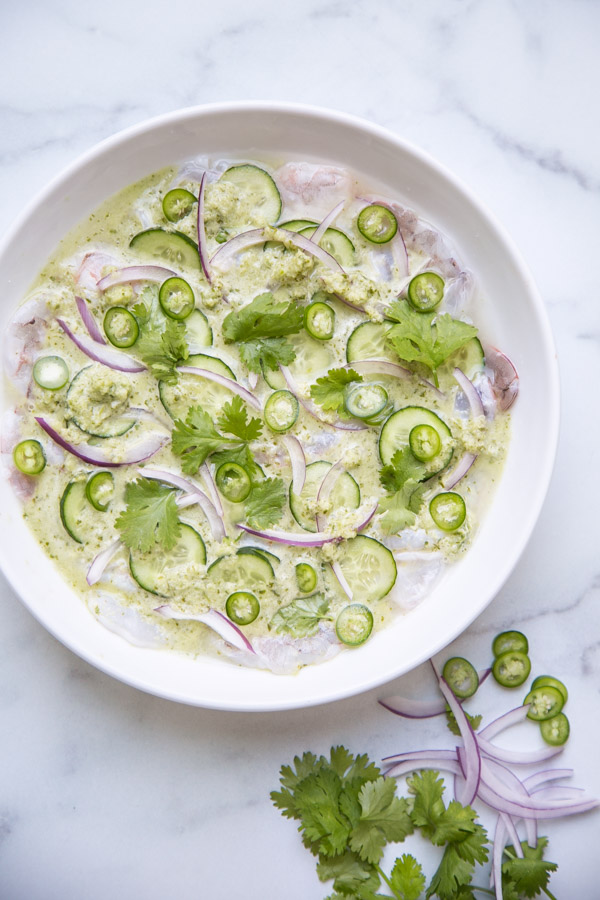 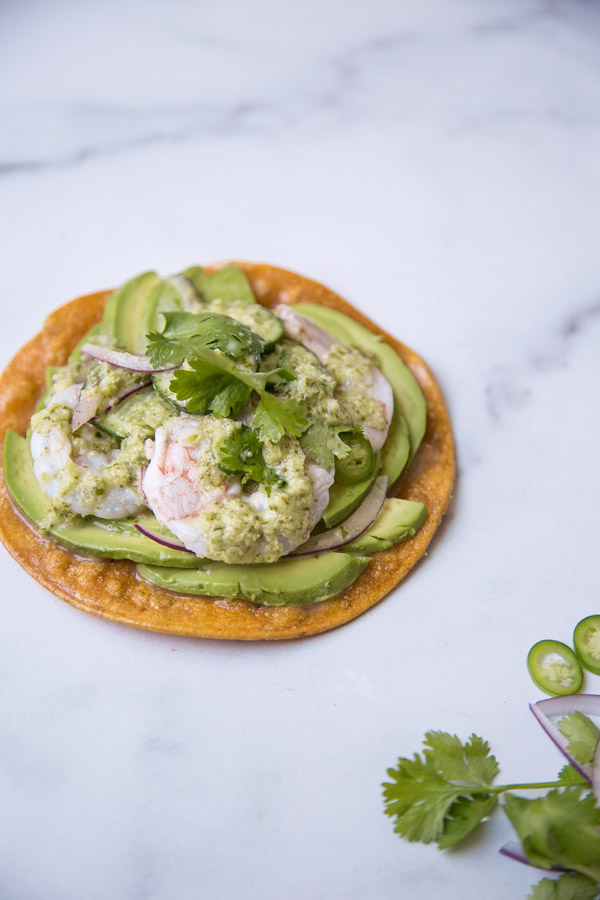 Read on for this shrimp aguachile tostada recipe. I hope it broadens your palette and horizons, and is a gateway recipe to all the other gifts Mexican cuisine has to offer. 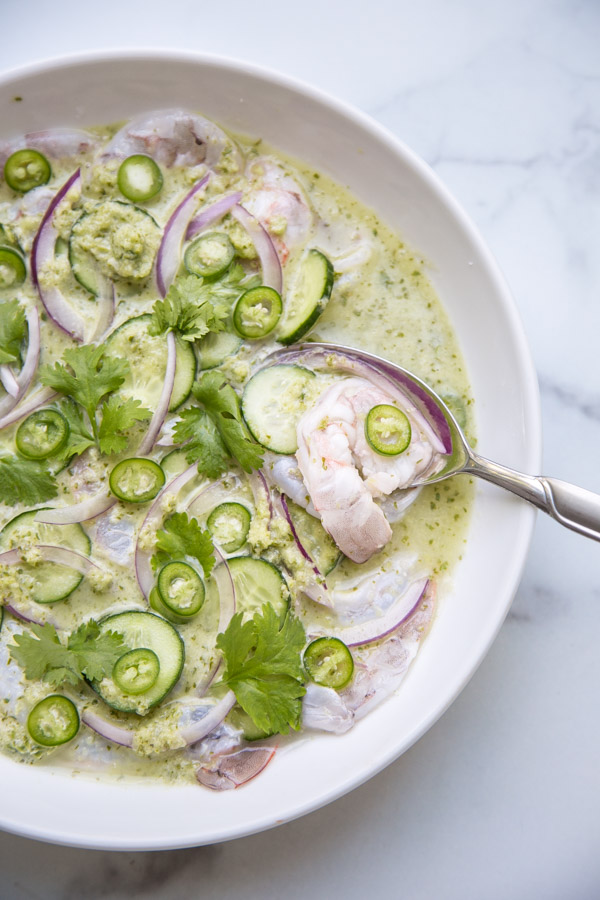 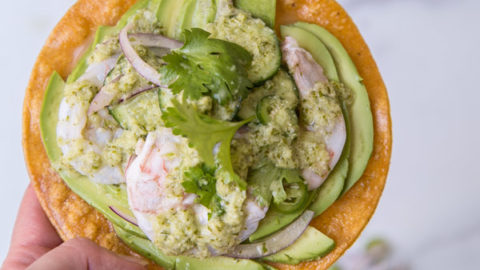 No ratings yet
print recipe
This shrimp aguachile recipe is adapted from Hispanic Kitchen. It’s a classic dish from Sinaloa on the coast of Mexico. Similar to Peruvian ceviche, the shrimp marinates in acid (in this case, lime juice) and salt until it becomes partially cooked. This version is topped with a jalapeno-cilantro dressing (verde) and garnished with red onion, cucumbers and sliced serrano peppers. If you prefer more heat, you can use serrano in place of the jalapeno in the dressing. I've served this aguachile on top of a crispy tortilla as a tostada, but you can also eat it plain as is for a paleo version. Though less traditional, I've also eaten it on top of mixed greens - a refreshing and delicious salad of sorts. To make this low FODMAP, simply omit the avocado (or only use 1/8 per serving) and the red onion.
Prep Time 10 minutes
Cook Time 40 minutes
Total Time 50 minutes
Servings 4
Author Phoebe Lapine

If you make this, tag @phoebelapine and #feedmephoebe - I'd love to see it!
241 shares