This low FODMAP shrimp diablo rice bowl recipe is packed full of warm Mexican-inspired flavors. It is based off of a traditional Mexican dish, camarones a la diabla. My version is gluten-free and low fodmap, and has the perfect amount of spice from guajillo chiles!

Every Spring I do a kitchen cabinet and pantry reorganization. This is when I pull everything out of my cabinets and marvel at the hidden treasures that have been languishing at the bottom of my organizer bins. Which is how this low FODMAP shrimp diablo recipe came to be.

I’ve had a bag of dried guajillo chiles for lord knows how long (though probably since I was testing recipes for my low FODMAP cookbook), and thought it would be the perfect opportunity to put them to use in a spicy seafood dish.

This recipe is inspired by the Mexican dish Camarones a la diabla, which translates to “deviled shrimp.” Needless to say, the plump shrimp are coated in a fiery red chile sauce. Many of Mexico’s classic seafood dishes hail from Veracruz, which is right on the Gulf of Mexico. I’ve long wanted to go so I can sample this dish in person. But in the meantime, I’ll settle for a little escapism in my kitchen thanks to this and this recipe as inspiration.

Guajillo chiles are on the milder side, and are used for many Mexican red sauces. They might not give you as much fire as you desire in this dish, so feel free to add a few chile de arbol, or even chipotle in adobo if that’s all you have on hand. My gut can’t always handle the heat these days, I opted for a slightly less devilish end result.

I used fresh tomatoes in this recipe since I was feeling lazy, but the flavors would be even more pungent and complex with roasted tomatoes, which is the way that many diablo sauce recipes go. Simply toss the quartered tomatoes with a little olive oil and roast in a 450 degree oven for 30 minutes or until caramelized.

The shrimp can be served with tortillas, but I chose to make them the topping for a low FODMAP rice and kale bowl. It’s a really quick weeknight meal, especially if you have leftover rice lying around the refrigerator. I almost always have frozen kale and shrimp in my freezer, so this was a pantry meal from start to finish.

Though you could easily add garlic and onion if you’re not sensitive to FODMAPs, this shrimp recipe focuses on low FODMAP produce like tomatoes, kale and fresh cilantro.

It also used dried hot pepper, which though not appropriate for everyone with IBS, are a great tool for low FODMAP cooking if you can tolerate them. If you have to skip that aromatic flavor from the garlic and onion, a little heat goes a long way to adding depth to a dish.

Since all animal protein is naturally low FODMAP, shrimp is always a great low FODMAP option. You can also easily make this shrimp packet recipe low FODMAP or adapt this shrimp and corn casserole recipe.

If shrimp isn’t your thing, you can also substitute diced chicken breast, or simply try this low FODMAP chicken recipe instead.

Finally, if you are not in this camp, feel free to add a garlic clove and half a shallot or onion to the diablo sauce.

How to prepare the peppers for the shrimp diablo sauce

Some people advise to destem and seed the dried chiles before you rehydrate them, but I found it to be easier to do so after soaking them in the boiling water. Either way, a pair of kitchen shears will help get the job done.

Using a high speed blender is one way to ensure the sauce is extra creamy, but if you don’t have one, a regular blender is fine.

Other than that small step, the prep time is only 15 minutes and the cook time even quicker on the stove top. Like all my recipes for weeknight meals, this makes 4 servings. 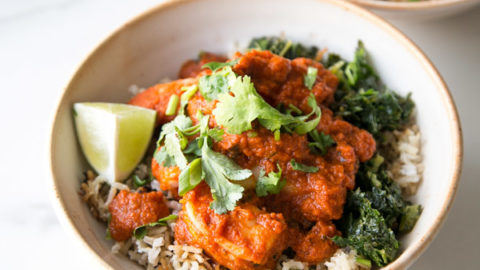 5 from 2 votes
print recipe
This shrimp diablo rice bowl recipe is packed full of warm Mexican-inspired flavors and spices! This recipe is based off of a traditional Mexican dish, camarones a la diabla. My version is gluten-free and low fodmap, and has the perfect amount of spice from guajillo chiles! If you are not ilow FODMAP, feel free to add a garlic clove and half a shallot or onion to the diablo sauce, which is more flavorful and traditional! If you don't have premade rice, just begin it at the start of this recipe. If you want more heat, you can also add a few chile de arbol, which are a little spicier than guajillo.
Course Main Course
Cuisine Mexican
Diet Gluten Free, Low Lactose
Keyword lowFODMAP
Prep Time 10 minutes
Cook Time 15 minutes
Total Time 25 minutes
Servings 4
Author Phoebe Lapine

For the diablo sauce

For the low FODMAP shrimp

If you make this, tag @phoebelapine and #feedmephoebe – I’d love to see it!
194 shares