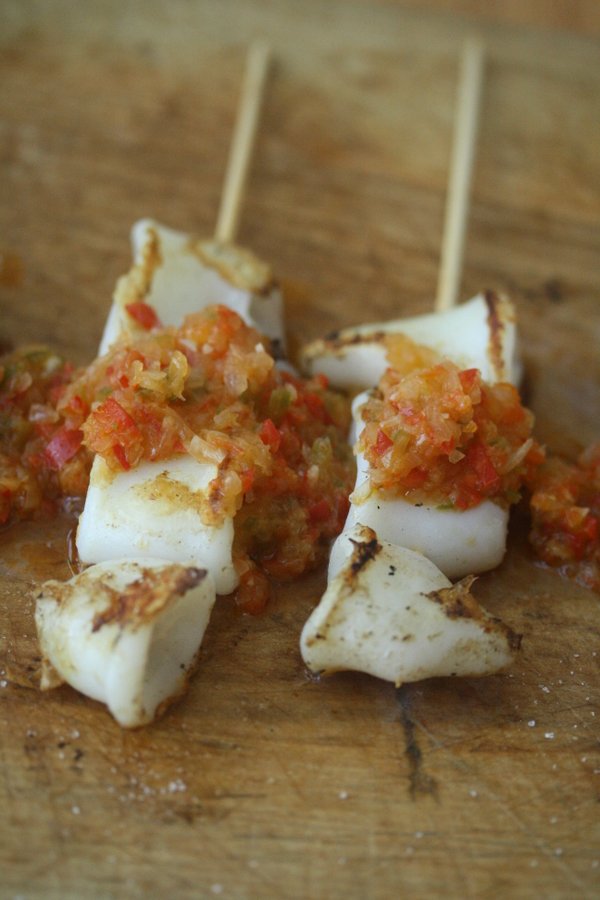 I know after the onslaught on Monday, you’re probably tired of me talking about San Sebastian. Sorry, Charlie.

When I got home there were a few things that I knew I had to make immediately in order to capture the taste memory. But I’ve only really begun to experiment and let the recipe inspiration run wild. So I decided to create a new column: tastetrotting! You know, like globetrotting…for food. I promise to spread these out over the next few months and get back to feeding you all the important seasonal stuff like Peanut Butter Granola Bars for back-to-school. 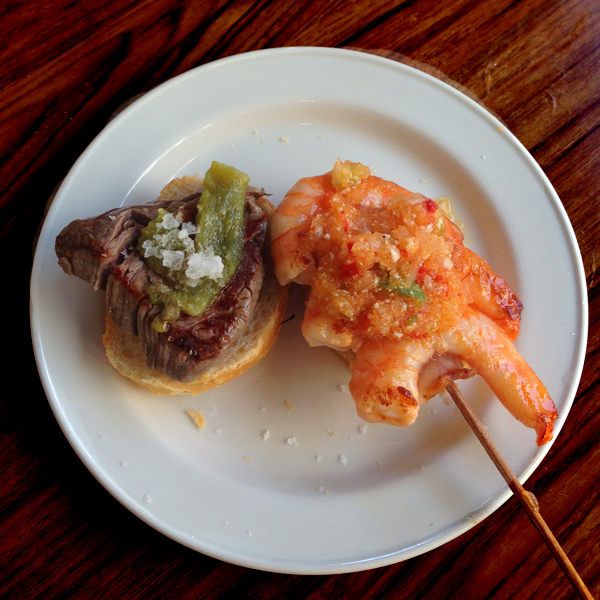 Even though almost everything at the pintxos bars was served either on top of bread or with a side of bread, it was actually a pretty easy place to eat gluten-free. You, er, just remove the bread. I couldn’t get enough of the fresh shrimp and squid, so one of the items I ended up ordering most was brocheta de chipiron or gambas (pictured above alongside a nice solomio…surf and turf is how I roll).

They keep the seasoning and sauces pretty simple in the Basque country. The seafood is so delicate and fresh that they try let the central ingredient shine. But one condiment/sauce I ended up seeing a lot of was a deeply flavorful sofrito of peppers, onions, and garlic. 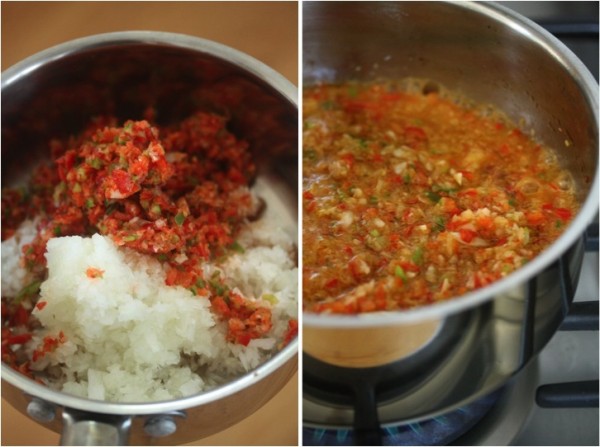 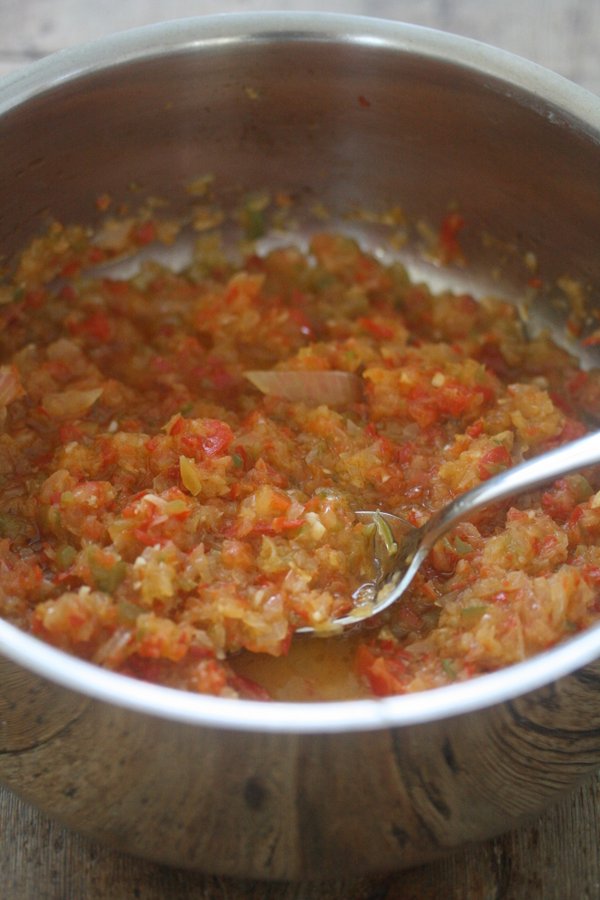 During my cooking class with San Sebastian Food I watched them make something similar to go on top of this dish. The key to the silky flavors was a massive amount of olive oil. And having grown up in a household where it was acceptable to drown your vegetables in olive oil and eat them with a spoon, I was pretty into it. 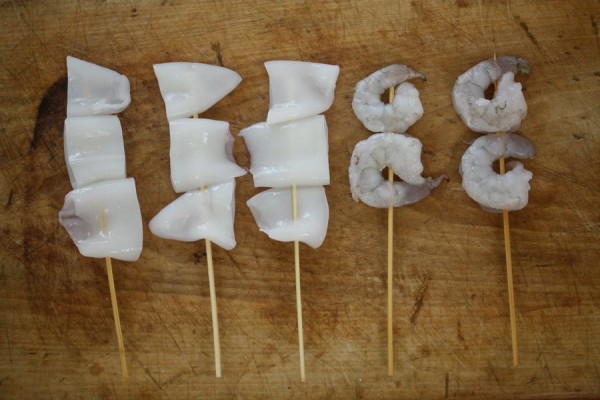 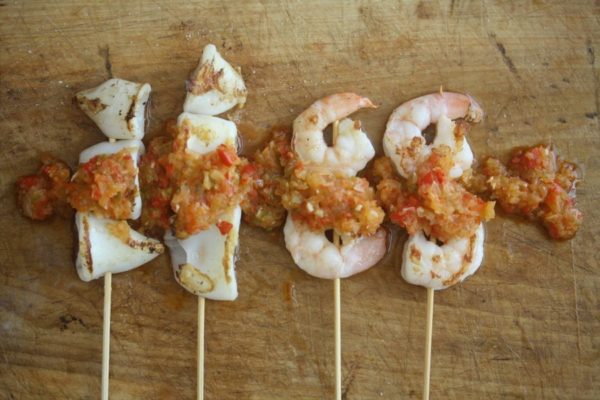 Luckily, I decided to experiment with these shrimp and squid skewers in Martha’s Vineyard, where my mom keeps olive oil on hand by the gallon. The market also just so happened to have some fresh squid that day. In San Sebastian they refer to small baby squid as chipiron and larger squid as calamares. It’s harder to find the smaller ones in the states, so I just made sure to cut mine rather small for my brochetas. 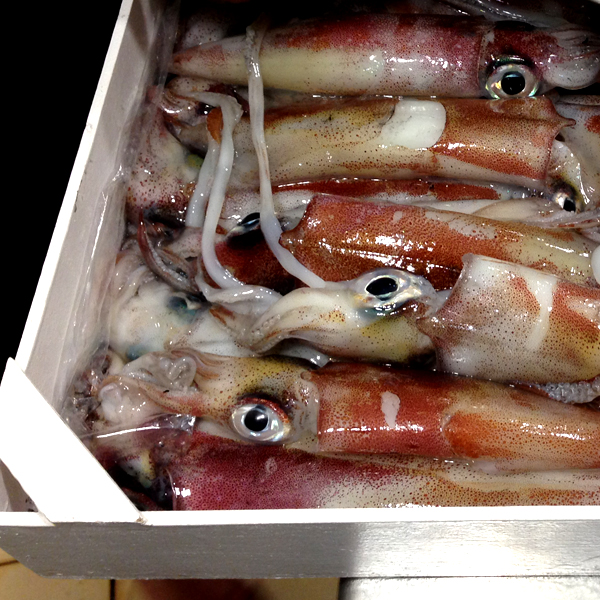 During the cooking class, I also learned how to break the squid down and remove their little ink sack. You kind of peel it off like a very delicate moisturizer sample in a magazine insert. I wish I had pictures of it, but unfortunately, being the goof that I am, my hands were covered in black ink. Another interesting thing I learned about the squid is that you have to let them rest for a day or two after catching them, so unlike most seafood, they actually aren’t best to eat straight out of the water. When they’re first caught, they have a lovely rosey-gray hue to their bodies. But after a day or two, once the rigor mortis subsides and the muscles relax, they start to develop that white opacity that we’re used to seeing.

The pepper sauce is great on any protein. I even used the leftovers from this dish to toss together with some gluten-free pasta and fresh corn. This would also be a great way to serve the shrimp or squid as a main course. Or you could always eat them on a piece of bread, as the Basque do.

Eat up and enjoy these shrimp skewers with squid and red pepper sofrito! 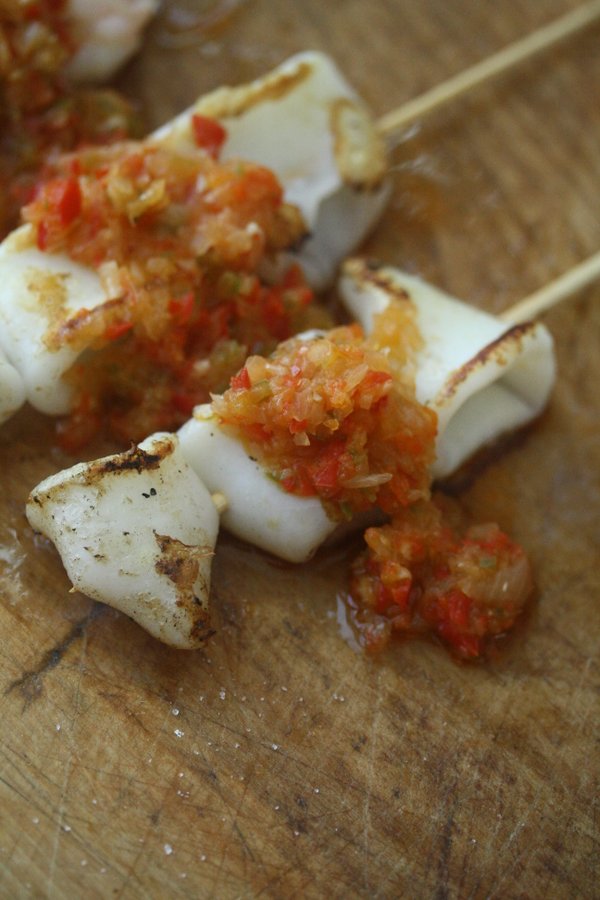 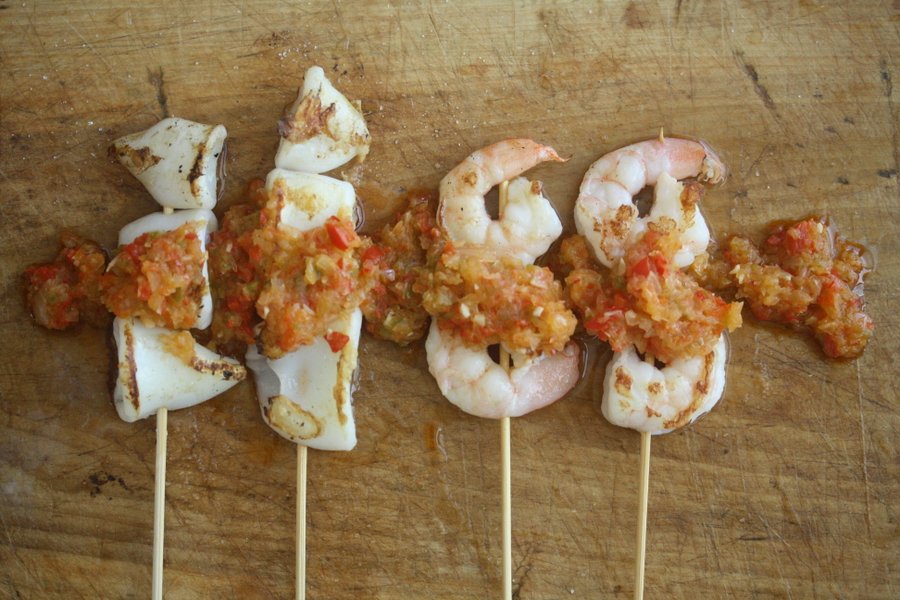 If you make this, tag @phoebelapine and #feedmephoebe - I'd love to see it!
1 shares