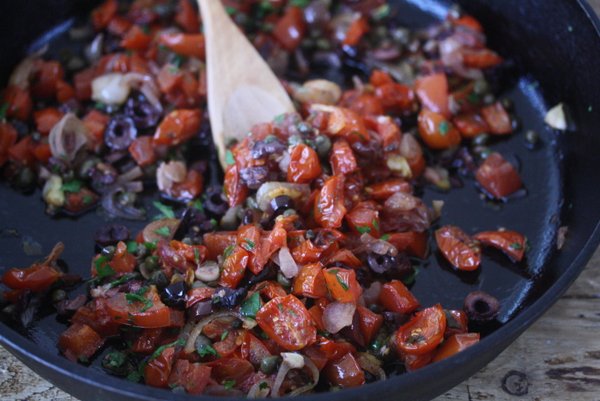 Growing up, my mom rarely made pasta for dinner. She’s been eating gluten-free for as long as I can remember, and back in the days before Whole Foods, you were hard-pressed to find any sort of decent wheat-free spaghetti substitute that didn’t disintegrate upon impact with boiling water.

So it wasn’t until after I fled the nest that I learned how to make a basic pasta sauce. In college, a 28-ounce can of Muir Glen was my lifeline. (At least, on days when I wasn’t eating pizza for breakfast, lunch, and dinner and wondering why half my tops looked like fat-guy-in-a-little-coat). I was always kind of a purest with my red sauce. Some might even say I was kind of a bore. But I could eat tomato-basil (on spaghetti or Antonio’s pizza) 7 days a week.

Though I love any food-related word that translates to slut, I never really got down with Puttanesca. Perhaps it was the anchovies. But more likely, it was just the idea of all those funky ingredients coming together in one big bitch-slap to your palette. Until recently, my mother never really cooked with olives or capers. But since he became a pescatarian, my dad is a devout caper convert. If there are capers in a dish, there’s a 98 percent chance he’ll think it’s the best thing he’s ever tasted. Kind of like my mother with mayonnaise and me with avocado.

I do have one distinct puttanesca memory, however. It comes by way of my Aunt Barbara and Uncle Denny, back when my summers on Martha’s Vineyard were a time when the whole family gathering under one roof, and the most controversial area became the kitchen. Yes, these were the days of Phoebe’s Restaurant. And yes, that added to the controversy. There were a lot of dominant blood-related cooks around the house, and their food tastes often got along even less well than they did.

I’m not sure how old I was, but I remember coming back to the big house one night during a gloomy summer storm and Barbara and Denny had made dinner for themselves and my cousins, who were much older, smarter, and more mature than I was (well, am). My mother likely turned her nose up and pushed some stray tomato cores aside to make herself a salad. But I ended up joining them and eating my first bowl of spaghetti puttanesca. I’m sure I removed the olives and capers to the side of my plate with expert operation-style precision. But I remember loving the flavors nonetheless.

I’m back on Martha’s Vineyard now for the first time this summer. The big house where my family used to gather was torn down in the fall, and the site contains the first stages of the McMansion the new owners are erecting. Truly the end of an era.

Luckily, my parents managed to buy the small cottage my grandparents built next door, and though they’ve improved it drastically from the rather schizo layout that existed prior, it still contains many memories from the days of puttanesca. It also has a new and very luxurious kitchen, which, if my mom’s siblings ever came to stay, could provide room for all the dominant blood-related cooks in the house – starting with my mother and me!

It was raining on the island this week and I decided to reach into my memory arsenal to reinvent this neglected classic dish. I used some fresh cherry tomatoes from the Farmer’s Market and concentrated all those funky flavors in the oven instead of on the stove. If you have a break from the summer heat wave, a big bowl of sweet and briny puttanesca sauce is the perfect meal for a crisp summer night, capers, olives, memories and all. 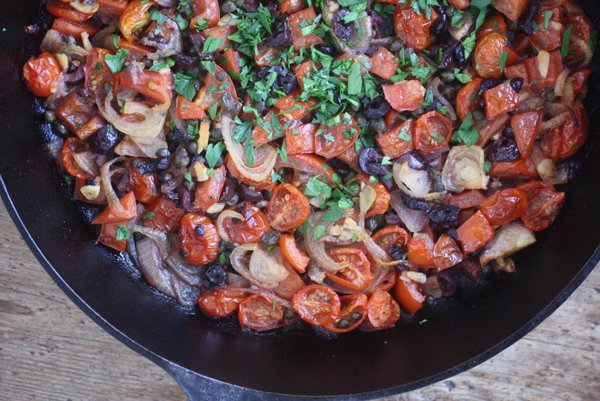 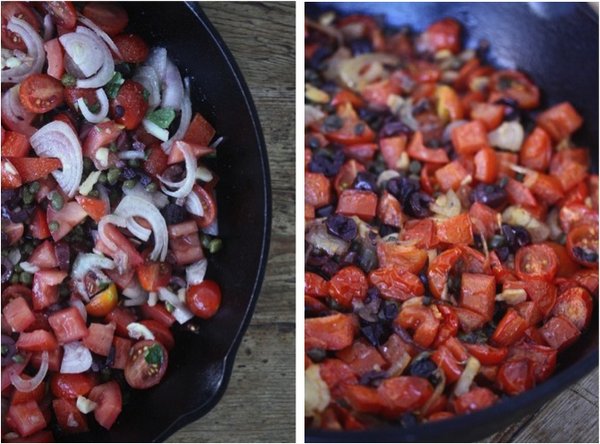 No ratings yet
print recipe
This sauce is excellent in its traditional incarnation: swirled with spaghetti. Since you're using fresh tomatoes, it's more of a ragu than a sauce that clings to ever strand of pasta. But regardless, slutty noodles never tasted better. The briny olives and capers also make it a great condiment for seafood. I actually added some shrimp to the pan and roasted them in the sauce for another 10 minutes before tossing the whole luscious mess with my slightly less luscious quinoa pasta. Perfection.
Prep Time 10 minutes
Cook Time 30 minutes
Total Time 40 minutes
Servings 4 people (with 16 ounces of pasta)
Author Phoebe Lapine 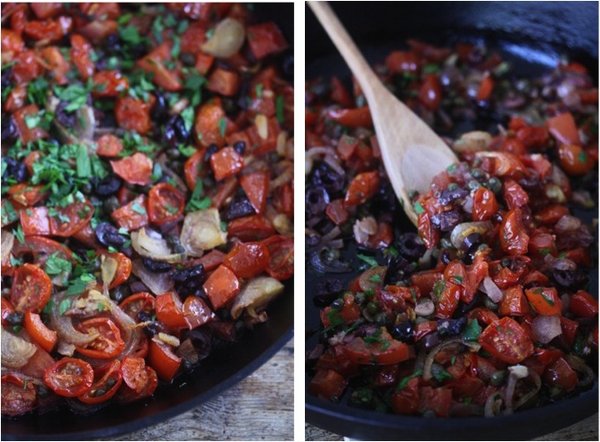