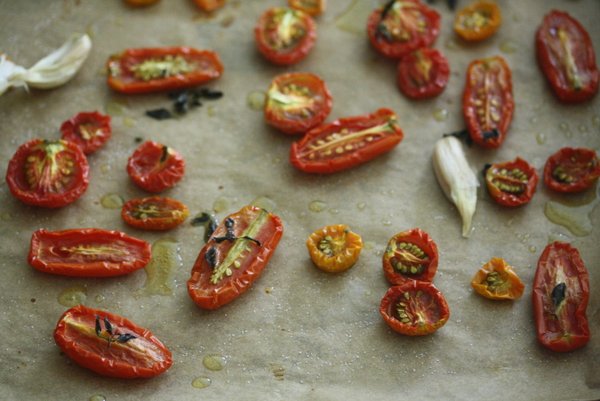 I used to have a serious sweet tooth. The one thing I missed most about New York City when I moved away for college were the bulk bin candy stories on every other block. You know, the ones that usually also include 10-calorie soft serve, should you decide to forgo every other sugary option under the sun in favor of something synthetically better for you.

I don’t know when it was that I lost my sweet tooth, perhaps in college when late night pizza was the best cure for drunken munchies – certainly long before I became gluten-free. But today I will happily trade an ice cream sundae for a plate of French fries. (Preferably though, I’d eat them side-by-side as I recently did at Pearl Oyster Bar with my friends Julia and Cleo. Highly recommended).

Due to my fruit phobia, I’ve never had much use for the phrase “nature’s candy.” It felt like a strange saying to apply to a plate of charcuterie. But it recently came to mind when I made a sheet pan of slow-roasted cherry tomatoes from the Farmer’s Market. I was using them to top some fresh ricotta crostini at a catering event. I made them hours in advance, and when I took them out of the oven and saw that they had shrunk to half their size, as I knew they would, my usual Jewish anxiety set in. Would there be enough? Should I run out and buy more? I have three hours…right?

But when I tasted them, the anxiety was outweighed by greed, lust, and gluttony. I immediately started to calculate how many more I could eat and still have enough for the party. Perhaps I would only top each crostini with one small morsel of tomato. Then I could get away with eating 5 square inches of the pan.

One of my golden rules of catering has always been: don’t cook for other people while hungry. It’s a slippery slope. But when it came to the tomatoes, it didn’t matter how many rolls of Whole Foods brown rice sushi I had eaten prior. The extra stomach compartment that had always been reserved for cookies and pounds of bulk sour candy reappeared with a vengeance. It wanted slow-roasted tomatoes, and it wanted them like crack.

I managed to control myself enough to get through the event. Regardless, I ran out of every dish I was serving that night since the hostess decided to double her guest list without telling. She got what she paid for. And I got to suffer the anxiety/consequences. But at least my tomato hoarding wasn’t to blame.

I’ve been satisfying my nature’s candy cravings ever since by making batch upon batch of these slow-roasted cherry tomatoes. The bowl never lasts long, but then again, I feel I should indulge my addiction while still seasonally possible. Come fall, I’ll be back to French fries and mayonnaise, unless I can find some other caramelized veggie pill to pop. 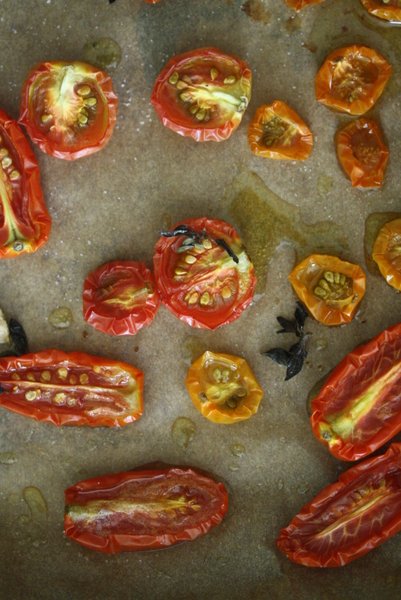 No ratings yet
print recipe
Natures candy. They make everything taste better, and have a terrible habit of disappearing from the bowl in 1/10 of the time it took to make them. Proceed with caution, as you may go into withdrawal come Fall.
Author Phoebe Lapine