As I lamented in this post, while there has been so much innovation in the gluten-free food space over the last decade, gluten-free pizza crusts have lagged far behind their other carb-y counterparts. I’m taking about pasta and bread, of course. 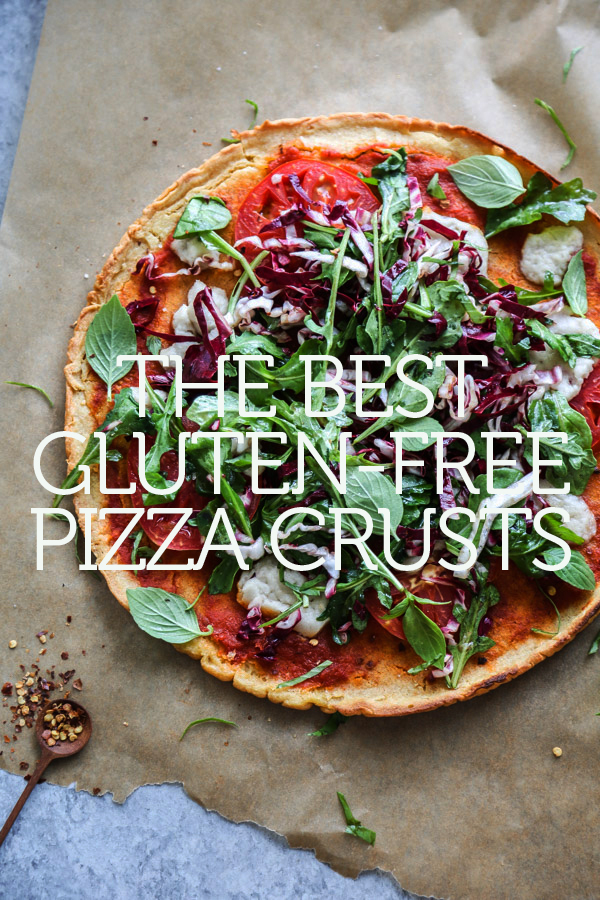 But there’s been some progress recently, especially at restaurants, where it is now commonplace for even the corner slice pizzeria to have a gluten-free pizza crust option available.

Some of these gluten-free pizza crusts are better than others, and sadly the pillowy soft persuasion is harder to find when translated to ready-to-eat options from the supermarket.

Since I posted this insane gluten-free pizza recipe a few weeks ago, you all have been asking for my thoughts on the best gluten-free pizza crust brands from the freezer aisle and my favorite homemade recipes.

As you die-hard readers know, Charlie and I owe our sanity during the pandemic to our weekly TGIF Friday Pizza Night (I’ll let you discern what the extra F is for). And since we were doing a lot of pantry cooking, and a lot of cooking cooking, it meant that we tried A LOT of gluten-free frozen pizza crusts.

This post covers the entirety of that gluten-free pizza crust territory, and I’m also sharing a few fan favorites that I have yet to try, but will of course embrace in the name of rigorous research.

With one dietary restriction often comes other preferences: vegan, paleo, keto, low FODMAP and the like. So I’ve tried to note which gluten-free pizza options are the best among these other subsets of needs.

Have no fear, there is a world of pizza enjoyment no matter where you fall on the restriction spectrum.

Read on for the best gluten-free pizza crusts, store bought and homemade.

And as always, please leave your favorites in the comments so I know what to try next, or sleep at night knowing that you agree with my taste in gluten-free pizza crust!

It should be noted that for whatever reason, gluten-free pizza crusts that are naked, sans toppings, are harder to find than ready-made heat-and-eat gluten-free frozen pizzas. Sadly, the variety at your local market will most likely skew towards the latter.

But we all know how fun pizza making at home can be, which is why this post is covering the crust options available to people who want to try their own gluten-free pizza recipe.

My choices are listed in order of preference.

Again, since variety is an issue and you might only have a few choices, I’ve also listed some options below that I don’t particularly recommend, but might be available to you. 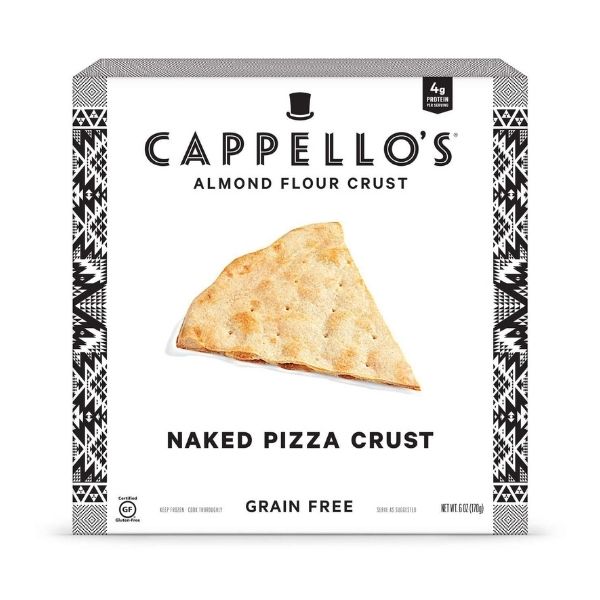 This is my favorite crust that balances texture, flavor and health. It’s made from simple, paleo ingredients, mainly almond flour. But really stands up and gets quite crispy in the oven. Like most gluten-free pizza crusts, it’s on the smaller side, so we usually require one whole pie each. Their ready-made margarita is also a good canvas if you don’t feel like sourcing your own sauce and cheese. It isn’t certified low FODMAP, but the ingredients aren’t problematic. They also have a Keto version now. 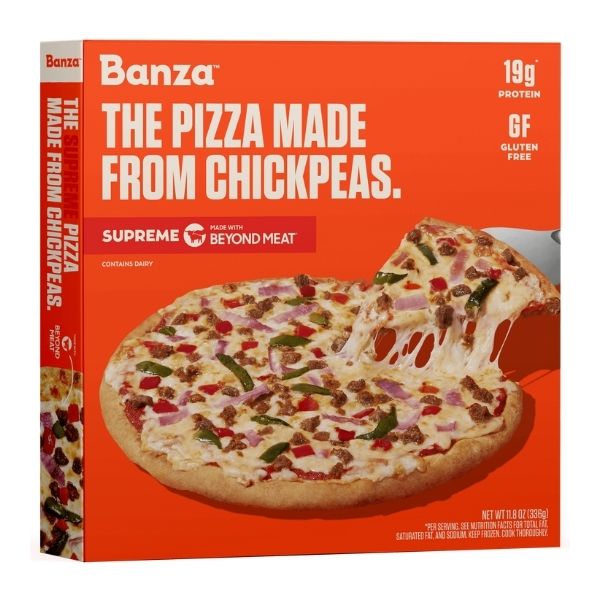 Banza is newer on the gluten-free pizza scene, but their chickpea flour crust gets a lovely crunch without tasting too much like buttery chickpeas (a flavor I don’t mind, but definitely is present in my homemade version…see below for this.) For those of you who are looking for a high protein option and don’t mind legumes, this is my vote. 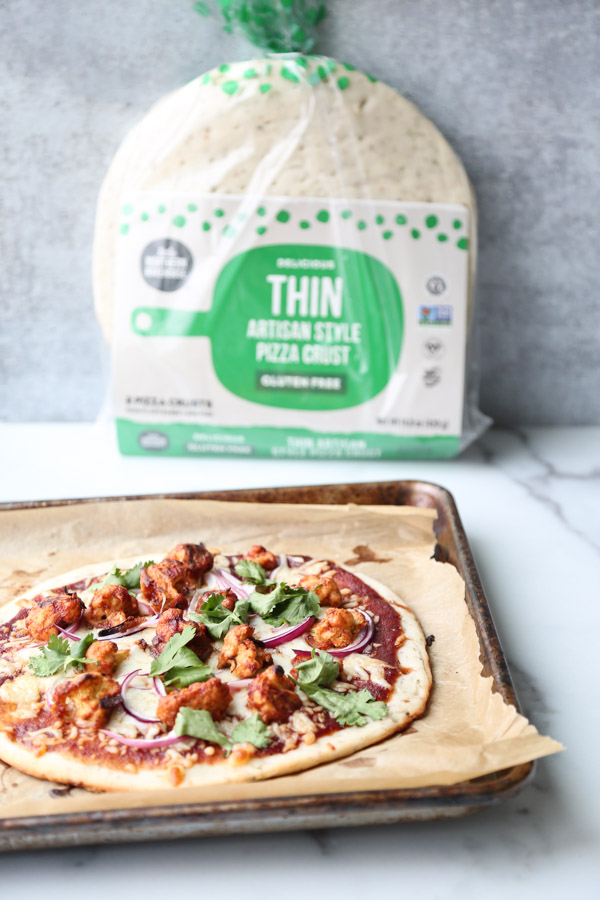 This is one of the rare shelf-stable pizza crusts and feels more like a flatbread. But it produced fairly excellent results. This is definitely the best vegan option in the mix. One thing to note though is that they get moldy fairly quickly, so it is best to store them in the freezer if you’re not planning on using them right away. Here are some more pictures of them made in my kitchen! 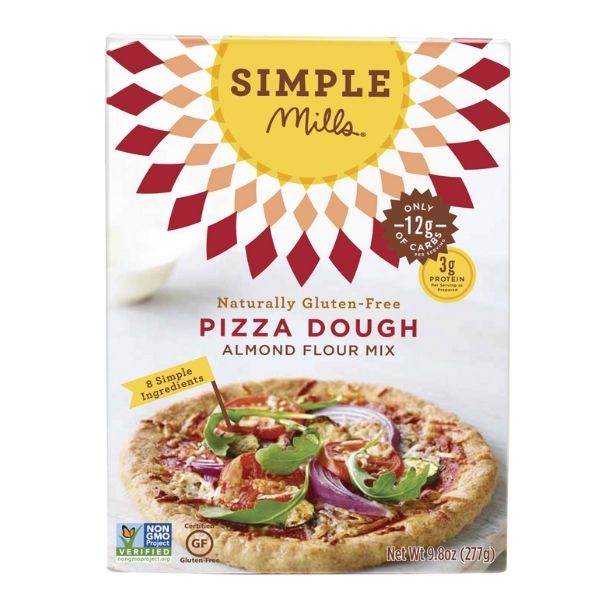 If you don’t have room in your freezer but want to stick with a paleo gluten-free pizza crust, the Simple Mills boxed mix is an easy enough semi-homemade option. You don’t have to add much to the batter and you get the added pleasure of being able to form the crust into any shape you like. I would also give this mix the superlative of Healthiest Overall Gluten-Free Pizza Crust. Unfortunately, it kind of tastes that way too. 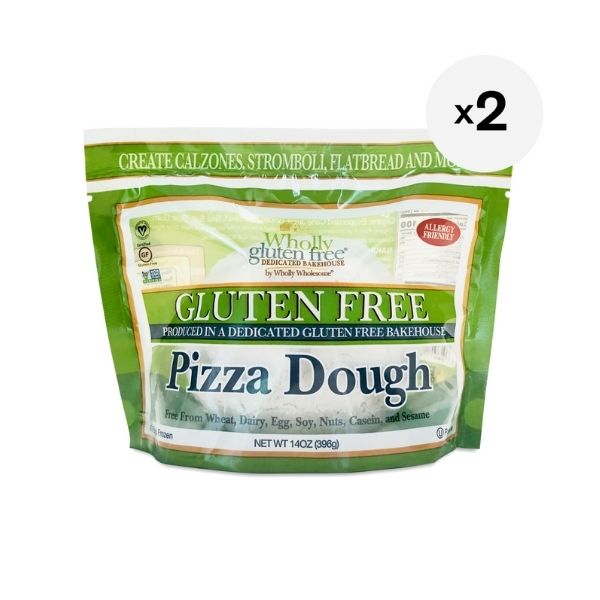 This is one of the very few options that comes frozen in dough form. You simply thaw the ball and then roll it out as one would a normal pizza crust. I think that part of the fun of making your own pizza at home is being able to make not only topping choices, but shape choices! This gluten-free crust works great for sheet pan pizzas and more free form pizzas on the grill alike. 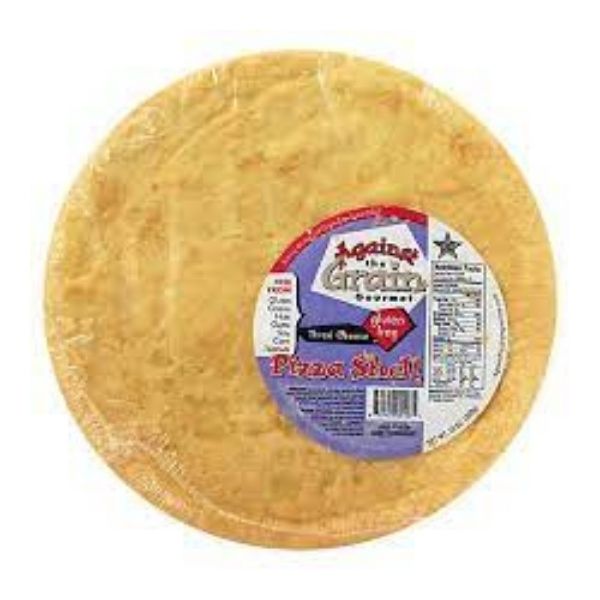 Against All Grain Paleo Gluten-Free Crust

I list this one below some of the other paleo options because I find that their plain crust is much harder to find in markets than their ready-made pizzas, which I like, but tend to be overloaded with cheese. This is a great option though if you are also avoiding corn, nuts, and soy. However, it is NOT dairy-free, vegan or low FODMAP. The main flour they use is tapioca starch and the base tastes a little bit like Pao de Quejo (Brazilian cheese bread) which is delicious but not the lightest. NOTE: this crust is available at Thrive Market, which I highly recommend as a more affordable online retailer for GF brands that also fit other dietary restrictions. It’s cheaper than Whole Foods and not owned by Jeff Bezoz 🙂 Consider joining here. 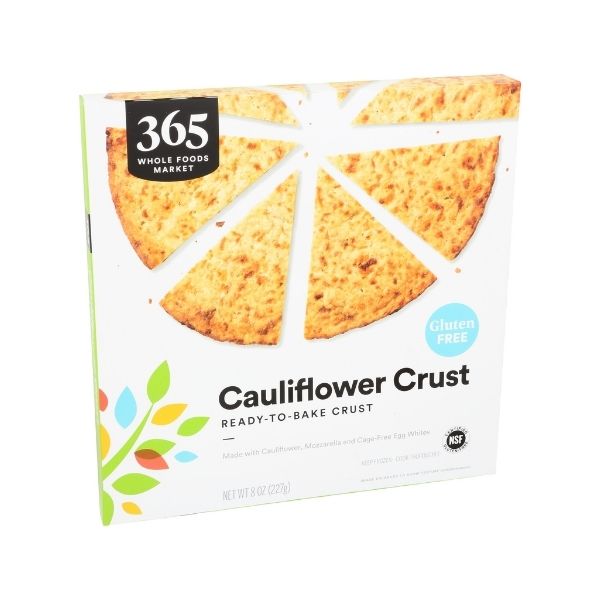 Full disclosure: this is the only cauliflower crust I’ve tried. I know some people like this one. I thought it worked pretty well in that the cauliflower was fairly disguised and it got crispy. When you make your own homemade cauliflower crust, it can be harder to maintain a really unflimsy base. Overall, this crust kind of tastes similar to the above crusts but has the added benefit of vegetables!

NOTE RECOMMENDED, BUT OTHER OPTIONS:

This used to be one of the only crusts available and it is both small and unappealing. Udi’s used to be the gold standard in gluten-free baked goods, but luckily other brands have entered the arena and far outdone them in quality and flavor.

Similar to Udi’s but in Europe, Schar is the most prominent gluten-free brand. I think they outperform Udi’s on taste, but tend to be highly processed with lots of soy, corn and other ingredients that I try to avoid in packaged food. It is low FODMAP though, so a good option for those folks. 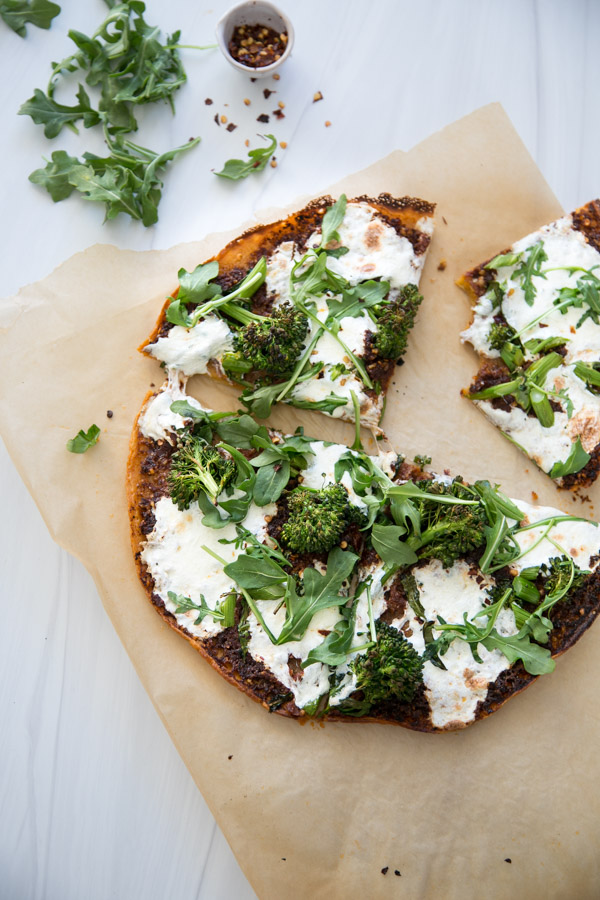 Using chickpea flour to make a gluten-free pizza crust is one of the fastest and easiest methods. It’s also known as a socca crust in parts of the Mediterranean. You simply combine equal parts chickpea flour and water, then whisk in some oil and salt. Heat up a skillet and cook the crust first, then add the toppings. 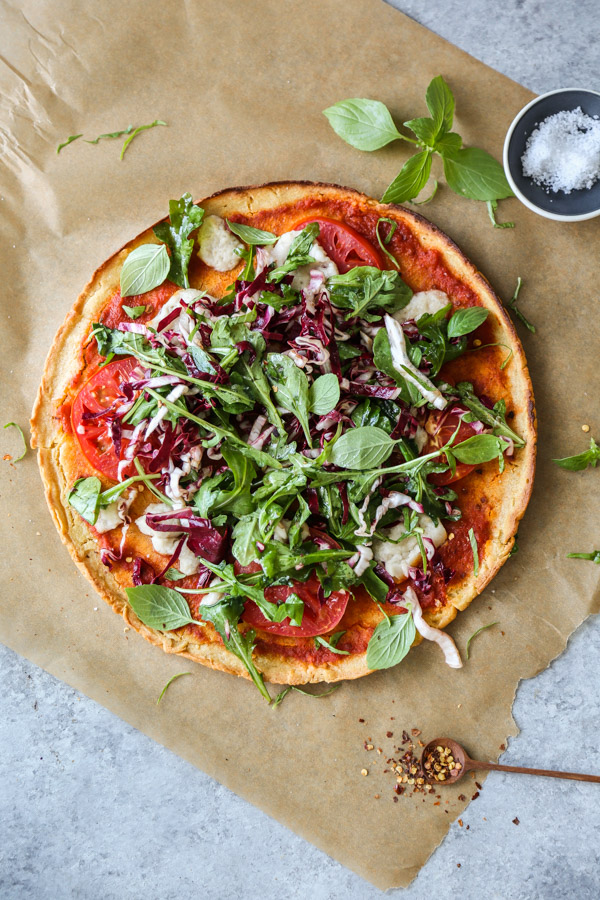 Cauliflower crust at home is a little more involved and requires some dairy to hold the “dough” together. But it can be quite delicious!

One easy homemade gluten-free pizza crust option is to simply use a tortilla! Corn tortillas crisp up nicely in the oven as you’ll see in these baked breakfast pizzas, but can also be made with traditional Italian toppings as a quick fix. 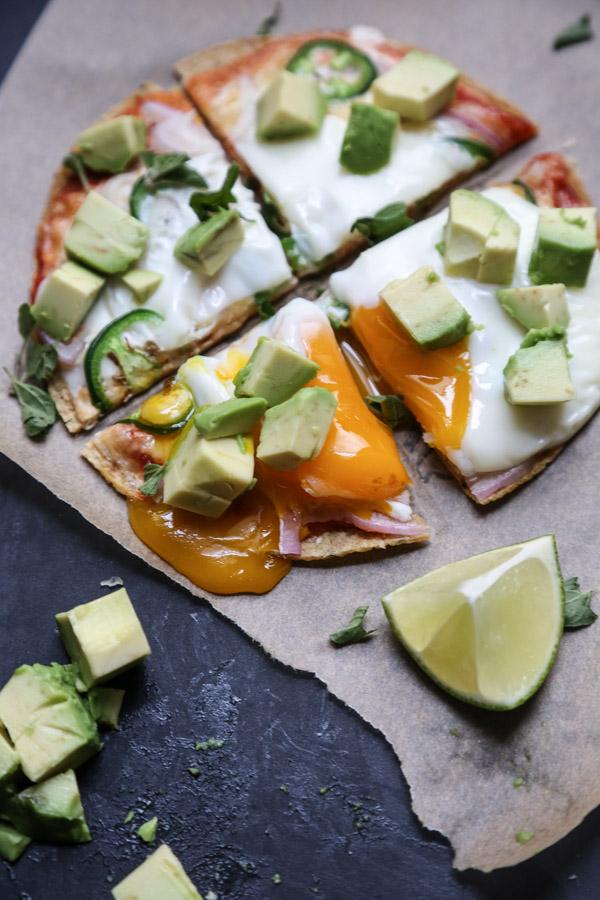 If you don’t want to but a premade flour blend specifically for pizza, this recipe uses AP gluten-free flour to create an easy crust with very few other additions.

This one also uses AP flour but is a yeasted dough so gets that pillowy soft rise.

Polenta can create a very crispy base for pizza and it tastes wonderful as an Italian alternative for traditional crusts. It also is great to mold in the shape and style of deep dish pizza in a cake plate!

Did I miss any of your favorite gluten-free pizza crust brands or dough recipes? Please let me know what you’ve enjoyed in the comments!