This vegan CPK Copy Cat BBQ Chicken Pizza recipe is brought to you in partnership with my friends at Little Northern Bakehouse. As always opinions are 100 percent my own. Thank you for supporting the brands that make this site and my gluten-free pizza possible!

Though I’d been exposed to the concept of BBQ chicken pizza throughout college, it wasn’t until I went to Los Angeles that I truly fell hard for the pie.

As I’ve lamented before, my upbringing was heavy on the quinoa, light on the fast casual food. This is obviously a good thing in hindsight. But at the time it lit a deep anthropological passion in me to try every breaded piece of chicken, 1/4-inch thick burger patty, and deep fried potato that our great land had to offer (in 15 minutes or less).

Once I got my driver’s license, and spent some quality “me time” on the interstate outside New York City, I made my way through most of my hit list of chain restaurants. But once I got to college and met some of my new sunny Californian friends, I realized there was a whole other world of fast casual establishments that I had yet to sample.

California Pizza Kitchen was among the most mythic. My friend Ali almost had a seizure when she heard I’d never been to CPK. So when I visited her in LA, it was the first stop on our culinary tour of the city (In & Out came shortly thereafter).

She waited eagerly as I tried my first slice of BBQ Chicken Pizza, while I tried to suppress the jaded New Yorker in me thinking… “This? Pizza?”

Obviously, I liked it. It’s sweet, savory and cheesy, so what could go wrong.

Needless to say, my college 4th meal of the day (late night pizza) was never the same. But there was still never a better version of the BBQ chicken pizza combo than at CPK. Which meant that the summer I got to work around the corner from one in LA, I ate it with embarrassing lunchtime frequency.

It’s shocking that it’s taken me this long to copycat the recipe, especially once I learned how easy it is to recreate: just a gluten-free pizza crust, BBQ sauce and cheese. Since we aren’t really eating chicken at the moment, I decided to give this version a vegan spin using crispy cauliflower instead of the meat. It has a similar technique to this buffalo cauliflower recipe and any pieces that don’t fit on the pie make for perfect snacking while it bakes.

The reason why this pie has become a quarantine favorite is all thanks to the gluten-free Little Northern Bakehouse crust. As you know, this brand is my absolute favorite for breads and buns, especially since I can serve them to my vegan friends (egg-free!). But the crusts are a brand new addition to the line and I couldn’t be more grateful. Since they are also certified as Glyphosate Residue Free by third-party testing, it’s the perfect substitute to make this copy cat recipe more healthful.

So for our Friday night pizza party (TGIFPN!) we’ve been using the Little Northern Bakehouse thin-style pizza crusts, which take only 15 minutes to crisp in the oven and taste LEGIT, according to this snobby New Yorker. Whipping up a GF crust from scratch still feels like a pain sometimes when I just want dinner to be quick and easy, so having these crusts at the ready in our freezer has been a game changer.

Read on for my healthy CPK copycat BBQ Cauliflower Pizza recipe. Are there any other fast casual dishes you want me to recreate to be gluten-free and vegan? Let me know in the comments! 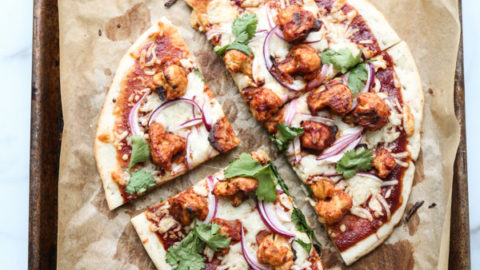 No ratings yet
print recipe
This is a vegan spin on the best California Pizza Kitchen BBQ Chicken Pizza using chickpea battered cauliflower. You can of course sub chicken or regular cheese. Any extra cauliflower can be used for snacking while the pie bakes!
Prep Time 10 minutes
Cook Time 25 minutes
Servings 1 pizza
Author Phoebe Lapine

If you make this, tag @phoebelapine and #feedmephoebe – I’d love to see it!
174 shares