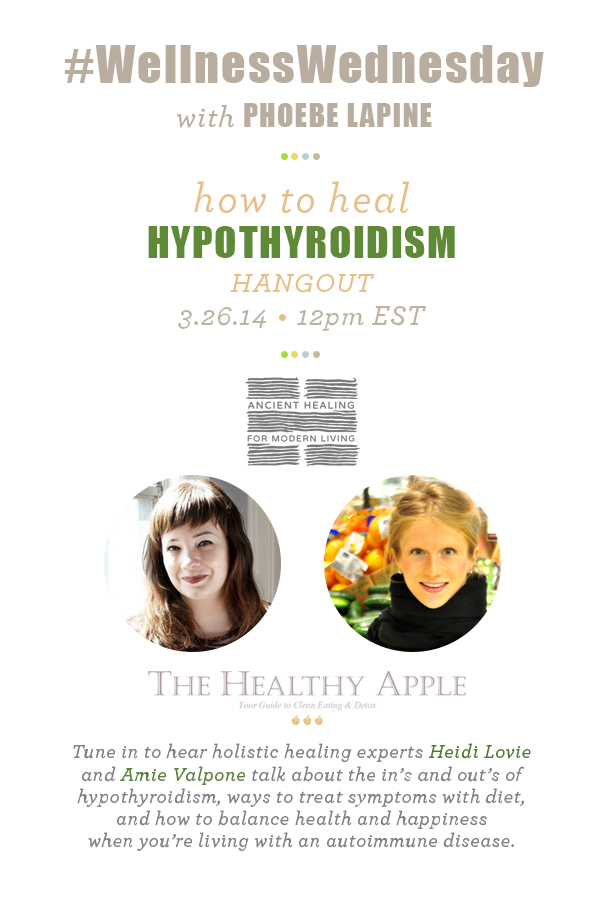 The year after I graduated college, I was diagnosed with Hashimotos Thyroiditis. My doctor, who I’d been seeing since I was a teenager, casually explained that it was an autoimmune thyroid disorder and was fairly common in women my age. She told me not to worry – it was completely treatable with Synthroid, the widely prescribed hormone replacement drug. But I’d probably need to be on some form of medication for the rest of my life.

Obviously this last piece of news did not sit well with me. I was pretty wary of medication, even though I turned a blind eye to the fact that birth control fell into that category. So I did what any super mature 22 year old would do in my situation: I pretended like the conversation never happened.

After two years of stomach pain, it became clear that my digestive system was seriously janky. I ended up in another doctor’s office, this time someone with a little more of an integrated perspective. He took some blood work, recommended I start an elimination diet, and one month later relayed that I was allergic to gluten. He thought that if I got this under control, and my digestion healed, that I could potentially continue treating the thyroid issue without medication.

My new gluten-freedom definitely moved the needle at the beginning, especially where my digestion was concerned. But it wasn’t until I started seeing an acupuncturist that the correlation between hypothyroidism and gluten was really explained to me. Heidi has since become my health rock, helping to synthesis the often conflicting information I get from various doctors and practitioners in my life. It was also Heidi who finally talked me into going on a natural thyroid medication, after my adrenals eventually gave out and my hands and feet were going numb from serious vitamin B deficiency.

Even though over 4 percent of the adult population has hypothyroidism, it seems not to have really entered the popular vernacular in the same way that celiac disease (only 1 percent) has in the past few years. Perhaps it’s because there is such an easy mainstream solution in the form of a pill. Perhaps it’s because hypothyroidism isn’t as sexy. But regardless, I don’t see a lot of discussion of it in mainstream media.

So needless to say, this Wellness Wednesday has been a long time in the making. The reason why Heidi began practicing acupuncture in the first place is because she herself was diagnosed with Hashimotos at a young age. I’m very excited to share her wisdom with you, and even more stoked that Amie Valpone of The Healthy Apple will be joining the conversation. Amie has the disease as well and her site is an amazing resource for information on treating hypothyroidism and other autoimmune disorders with diet.

You can RSVP to next week’s hangout here. And I urge you to share with any women in your life who have been living with hypothyroidism – there may be more than you realize!

See you then!
Xo
Phoebe