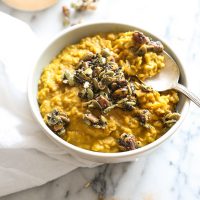 If you want to use steel cut oats or quick cooking oats, just check the package instructions and increase or reduce the amount according to their pre-set ratios. You’re working with 2 cups of liquid. You can make the brittle up to two weeks in advance. The oatmeal can be made at the beginning of the week and reheated in the microwave in individual bowls. If you’re making the oats in advance, add ½ cup water and cook just until the oats are tender.