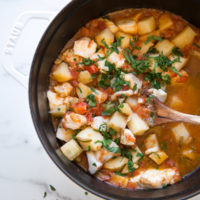 This recipe is reprinted with permission from my book, SIBO Made Simple! The key to Basque cooking is an ultra-flavorful base called sofrito, which is essentially peppers, onion and garlic cooked low and slow in a large amount of olive oil until caramelized. Obviously, we have to forgo two elements of this holy trinity when on a SIBO diet. However, you get the same effect by sweating several types of peppers in garlic oil. This stew is inspired by a traditional Marmitako, which loosely translates to “tuna pot.” I’ve swapped the albacore for cod to limit the mercury exposure. You could use any sturdy medium-thickness white fish though—hake, haddock, and halibut would also work well. Also, if you have Garlic-Infused Oil already on hand, feel free to substitute it for the first two ingredients and skip step 1.