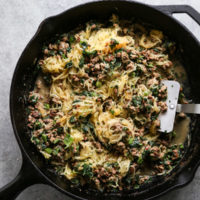 This tomato-free bolognese sauce is the perfect topping for spaghetti squash noodles. The whole combination is paleo and AIP-friendly. Just omit the fennel seeds and red pepper flakes if following an autoimmune paleo protocol and sub chicken stock for the white wine. You can add regular chopped fennel to the sofrito!