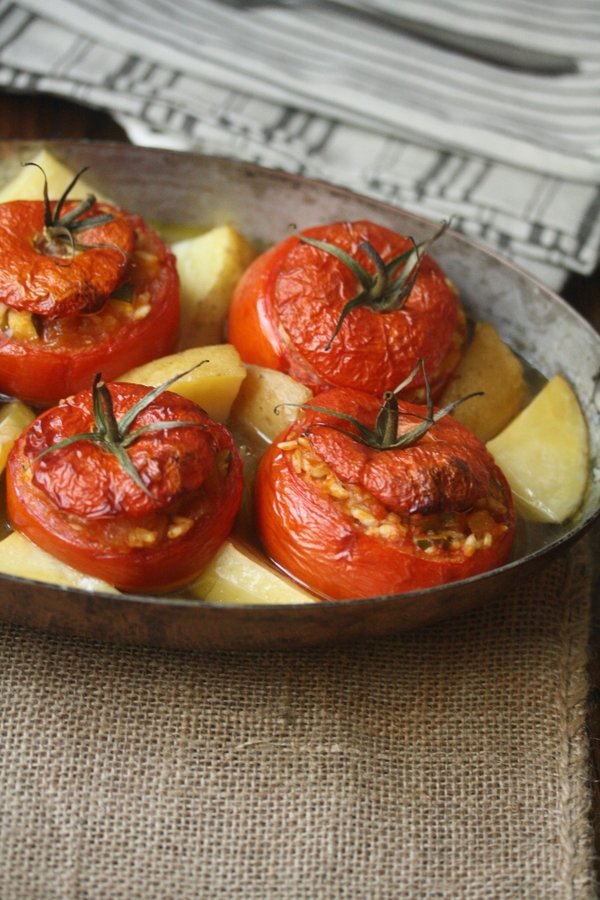 I’ve never really been a huge fan of stuffed vegetable side dishes. They always just seemed a bit hokey to me. Sure, the visual is sometimes great – down right adorable, even. But it feels like a lot of extra work in a recipe to produce something that doesn’t really make the final dish taste that much better.

Consider the bread bowl. I ate many an Au Bon Pan (ABP, for connoisseurs) broccoli cheddar soup in one of these bad boys in my pre-autoimmune gluten renaissance. It’s not technically stuffed, but I think it’s a worthy example of how food vehicles are not always everything you hope and dream for. The best part of the bread bowl, in my opinion, was scraping your spoon along the bottom and getting that gooey soaked dough on your spoon in every bite. But the crust, which made up most of the bowl, always was a little stale. Most bread bowl eaters I encountered discarded the majority of their hollowed out boules at the end of the meal. I personally never once finished one. Not even in my chubby 5-slice-a-day college years. 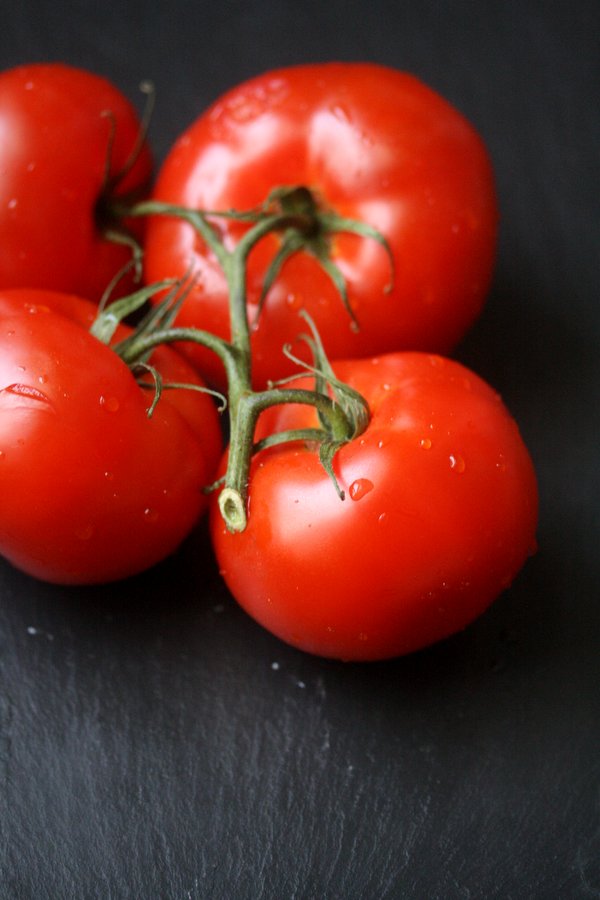 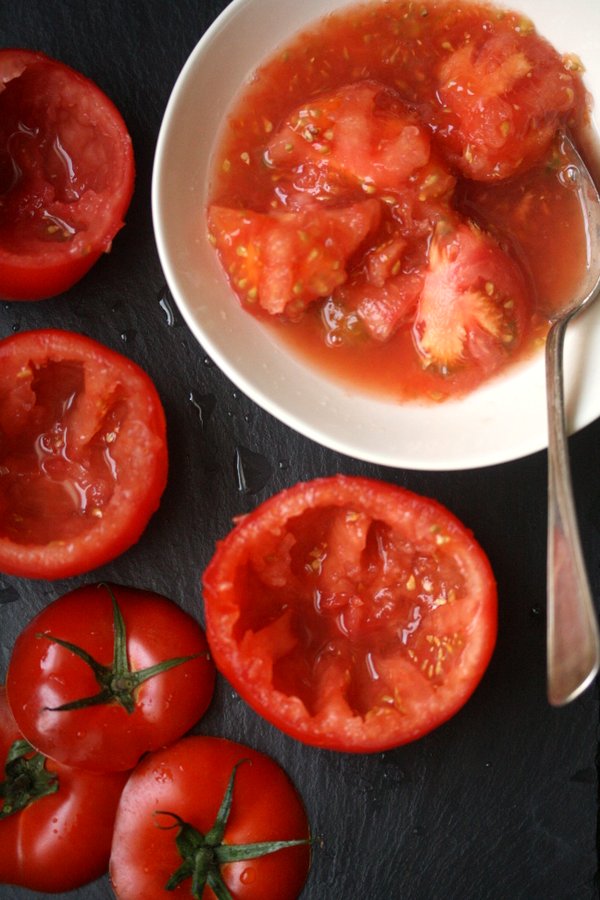 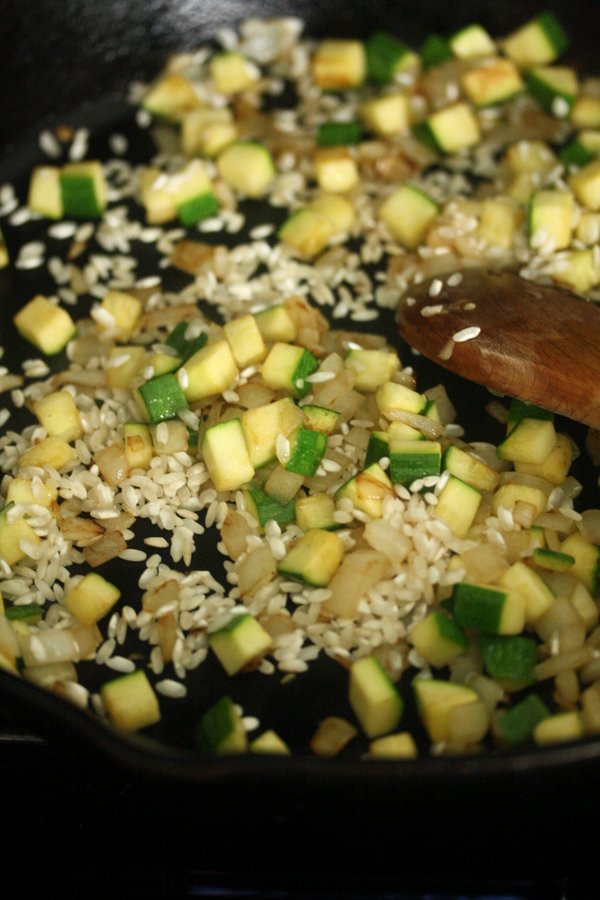 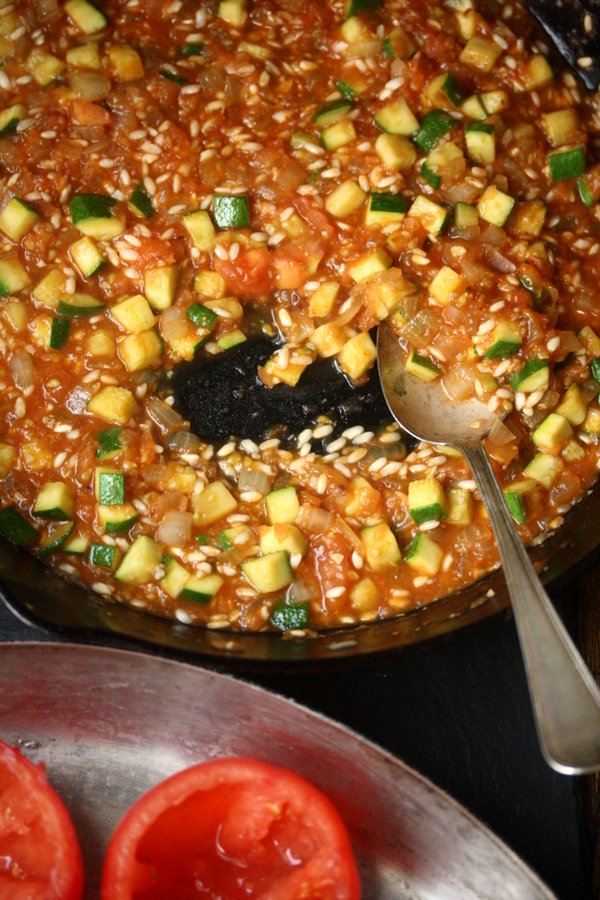 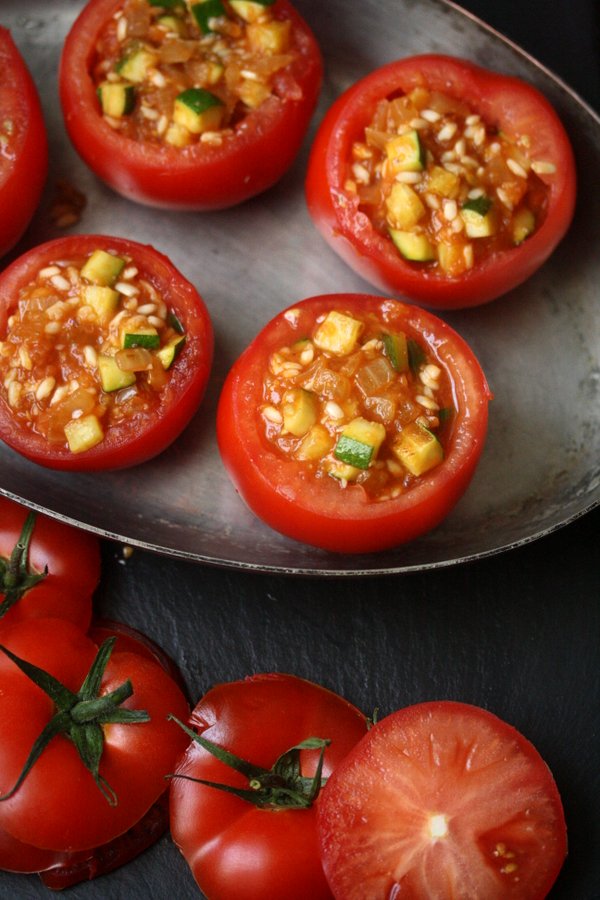 So I’ve always been a little bit of a hater when it came to gutting a zucchini or pepper as a potential home for my side dishes. Wouldn’t you rather just eat those veggies diced and lovingly sautéed in your meal than in one never-quite-cooked-enough bite with a smidge of rice/quinoa/cheese?

I thought as much for a long time. But then I went to Greece.

During my Alive Tribe retreat on the island of Evia, we were fortunate enough to stay in a beautiful villa that came equipped with a handy man who also cooked. Elias was such a Jack-of-all-trades, we started calling him the Greek Chuck Norris. Though personally, for sexiness’ sake, I would describe him more as a Greek Daniel Craig.

For all his manly prowess, which included wandering into the water with a Leatherman to pop several sea urchins from their rocky perches, Elias turned out to be the most graceful of cooks. We ate one beautiful meal after another produced by his man hands, and they were all perfectly simple, rustic, and elegant. So it’s no surprise that Elias was the one to finally change my opinion of hallowed out baked vegetables. And he did so with this Greek stuffed tomatoes recipe. 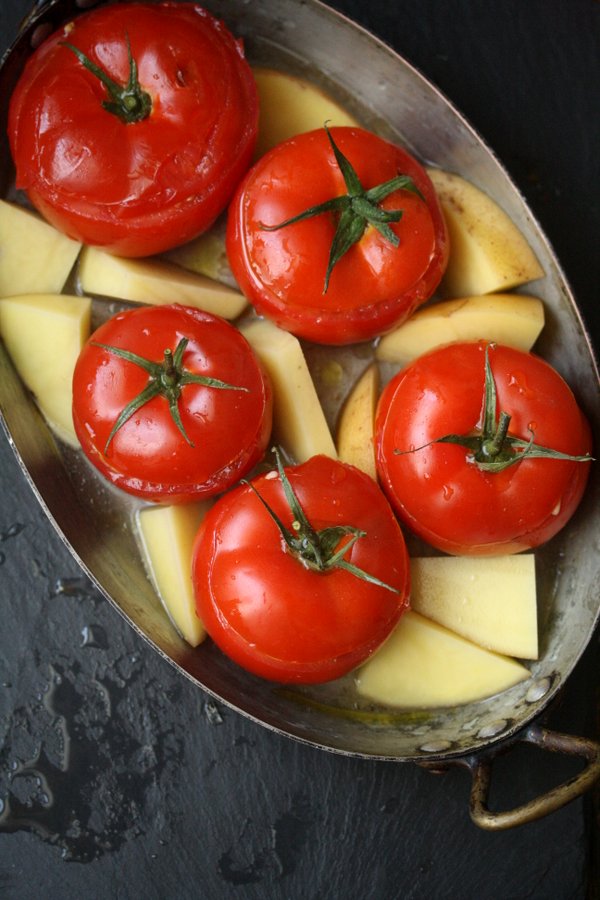 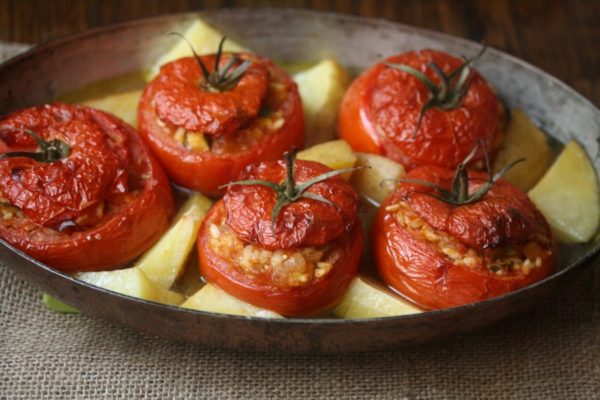 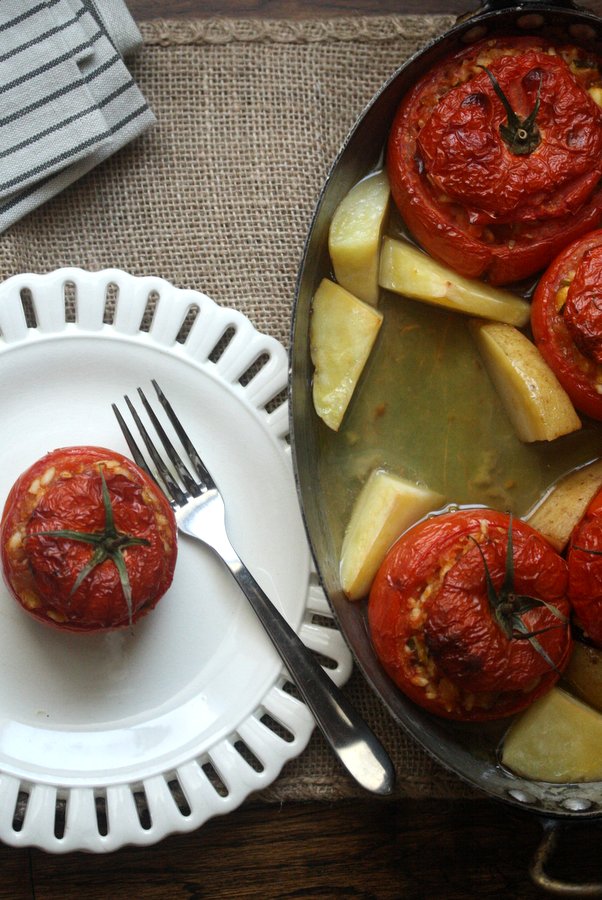 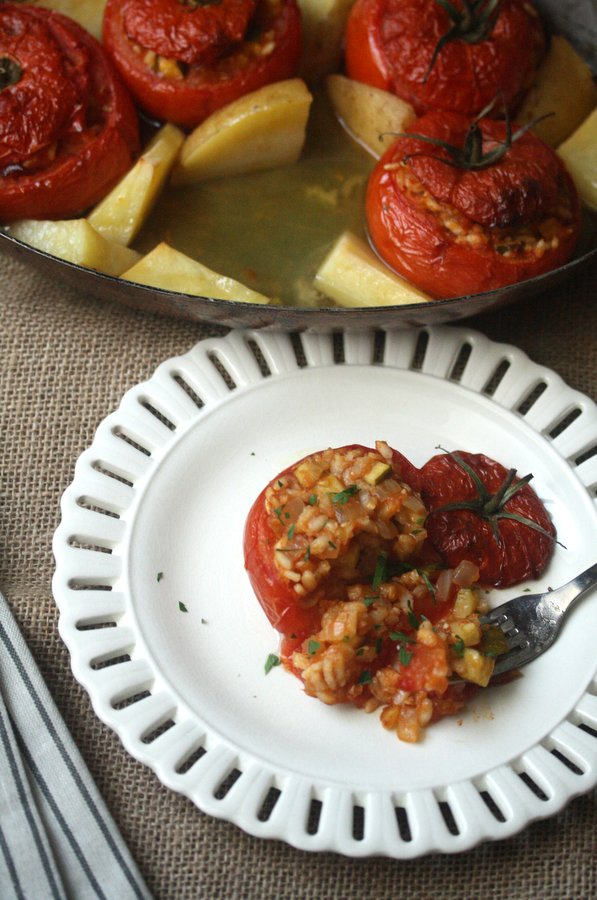 The secret to Yemista, I learned, was a longer cook time so that the tomatoes get fully baked and caramelized. And the second secret, which extends to all Greek cooking, is a crazy amount of olive oil.

Unlike some of the stuffed zucchinis of my nightmares, the tomatoes actually improve the grains inside when cooked and eaten together. Since you’re putting uncooked Arborio in the cavity, it provides adequate moisture for the rice to slowly plump up into a perfectly cooked risotto. You use the insides of the tomatoes as part of the risotto mixture, so nothing gets wasted and the filling and vehicle mixture have ever more reason to be married together in holy oven-roasted matrimony.

The best part of Elias’ dish is that he used the excess room in the pan to slow roast some potatoes alongside the tomatoes, which get tender and deliciously seasoned in the oil and tomato juices. I may no longer be an ABP bread bowl connoisseur, but you know that I’ve since earned an advanced degree in potato. And in my vast experience, no one makes potatoes that melt in your mouth more than the Greeks.

If you’ve been harboring a secret stuffed vegetable bias for years, I urge you to unpack that emotional culinary baggage and stuff it inside these tomatoes. ‘Tis the perfect season to try them, even if the Greek Chuck Norris won’t be there to help you on your way. 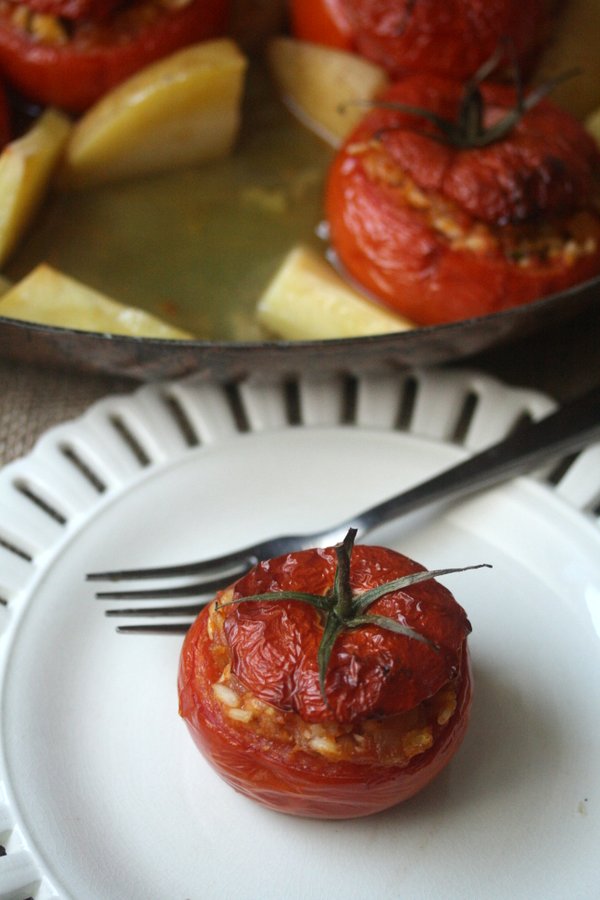 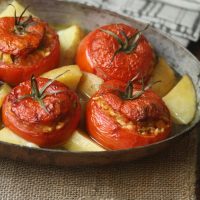 3 from 1 vote
Print Recipe
This baked stuffed tomatoes recipe with rice is one of my favorite Greek dishes. I made my version vegetarian and healthier with the addition of zucchini.
Prep Time 5 minutes
Cook Time 10 minutes
Total Time 2 hours 15 minutes
Servings 5

If you make this, tag @phoebelapine and #feedmephoebe - I'd love to see it!
441shares