This baked brisket recipe with onions and tomatoes is perfect for any Jewish holiday, but it has been at the center of our Passover table for generations. The beef gets stuffed with whole garlic cloves then cooked low and slow in the oven with a topping of caramelized onions. It is truly the best brisket you will ever eat.

Last Passover was our first zoom holiday of quarantine, and it feels pretty surreal that we’ll be doing it again very soon. Besides my family, the element I missed most was the Passover brisket, which seemed silly to make for just two people.

My Aunt Jennifer is responsible for most of my formative memories of brisket, and most of my positive experiences with Passover. The highlights of the family meal were always the many chairs added year after year to make up for the new additions to the table; my undefeated record with the afikomen; cousin Holly’s Chocolate Chip Macaroons; and my aunt’s brisket, which we would all be hankering for after two hours of bitter herbs, hard-boiled eggs, and plagues.

Passover has always been one of my favorite Jewish holidays, but in college, I couldn’t always make it back to CT to Aunt Jenn’s. My junior year, I was stuck at school and decided to host a seder of my own. My friend Jamie procured the prayer books and plenty of matzoh. Jillian made her mother’s potatoes. And I provided the brisket.

It felt a little strange to deviate from my aunt’s famous dish, but I managed to fill the buffet table with a respectable, if not, entirely perfect, slab of soft, slow-cooked meat thanks to the goyim influence of Mr. Emeril Lagasse.

Going into our second remote Passover, I will be missing these traditions and my Aunt’s brisket even more. So I thought it was the perfect opportunity to resurrect my recipe that was once a staple on my old blog, Big Girls Small Kitchen.

If you caught last week’s post, then you know I’m on a bit of a roll with cooking my way through my own archives from a decade ago. This recipe certainly held up, though SIBO Amigos will gawk at the ingredient list—I certainly haven’t used this much onion and garlic in a WHILE!

My husband was also thrilled to see ketchup back in the fridge. I used an organic brand and worried that without the chemicals, it would be missing that je ne sais quoi. But luckily it held up. Because I’m more sensitive to sugar now, I cut back on the added amount. And if I made it again, I might even experiment with eliminating it entirely and seeing what the ketchup does on its own.

The result is the best Passover brisket you will ever eat: moist, perfectly tangy, and sweet with a slight kick. Stuffing the meat with garlic cloves is my favorite part. This was the technique inspired by Emeril. They melt completely away by the end but make the sauce and meat that much more flavorful.

Read on for the best Passover brisket recipe! Until next year in Jerusalem…or at least, inside our relative’s house. 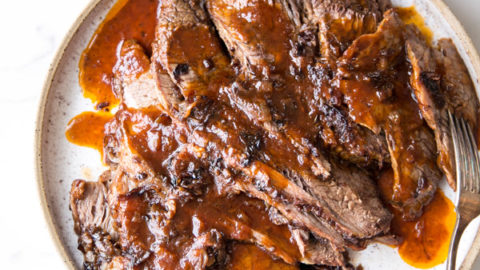 5 from 28 votes
print recipe
This baked brisket recipe with onions and tomatoes is perfect for any Jewish holiday, but it has been at the center of our Passover table for generations. I’ve been making this version inspired by Emeril’s beef brisket for my Seder table, and can truly say it is the best Passover brisket you will ever eat: moist, perfectly tangy, and sweet with a slight kick. Stuffing the meat with garlic cloves is my favorite part—they melt completely away by the end but make the sauce and meat that much more flavorful. This small touch and the homemade caramelized onions (none of that soup mix business, here) are what make this brisket special.
Prep Time 15 minutes
Cook Time 3 hours 30 minutes
Servings 12
Author Phoebe Lapine

If your pan is big enough, you can add some potatoes or carrots during the cooking process at step 5, after you whisk in the sauce ingredients. Keep both in fairly large chunks so they don’t overcook.

If you make this, tag @phoebelapine and #feedmephoebe – I’d love to see it!
172 shares