Fat’s gotten a bad rap for a long time in the wellness world. It’s not hard to understand why, given that its own name has become synonymous with muffin tops and cankles. 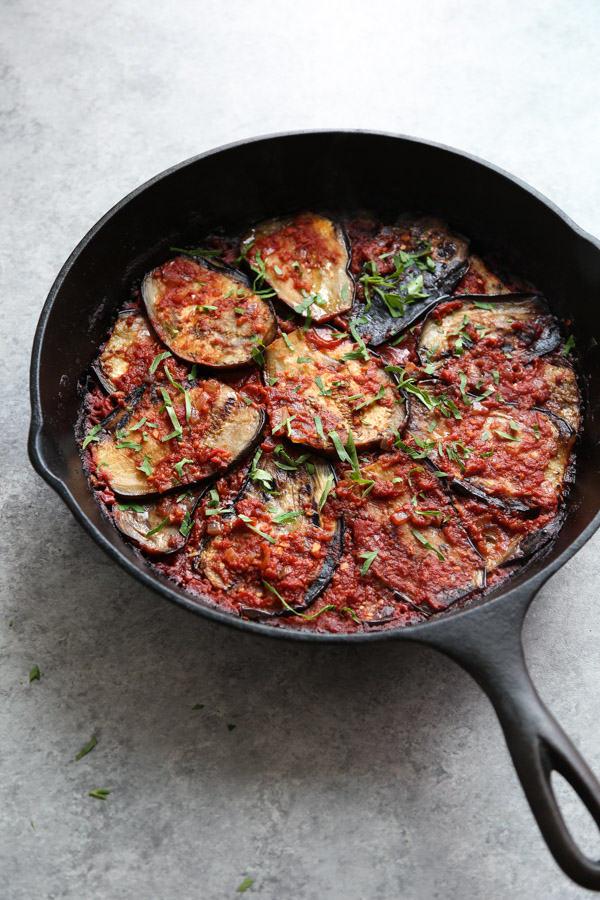 But having been raised on olive oil fried eggs and the philosophy that an avocado a day keeps the doctor away, I’m glad that people are finally putting down the fat-free SnackWells cookies and starting to reevaluate their healthy choices according to a different barometer.

Despite this progress, I still get criticized all the time for slapping the word “healthy” on my recipes alongside a few tablespoons of butter. And I still have to tinker with the amount of oil I use when developing recipes for fitness magazines like SELF, who live and die by the fat grams reported on their nutrition calculators.

Since I believe in real, unprocessed food, even if it contains pure fat, it’s hard for me to not feel like a hypocrite when I turn in a recipe for cheesecake with low fat sour cream and fat-free cream cheese, and just one measly tablespoon (if I’m lucky) of butter in the gluten-free crust. But mama couldn’t afford her own olive oil budget without these jobs, and sometimes you have to just bite your fat-forward tongue in order to please a client. 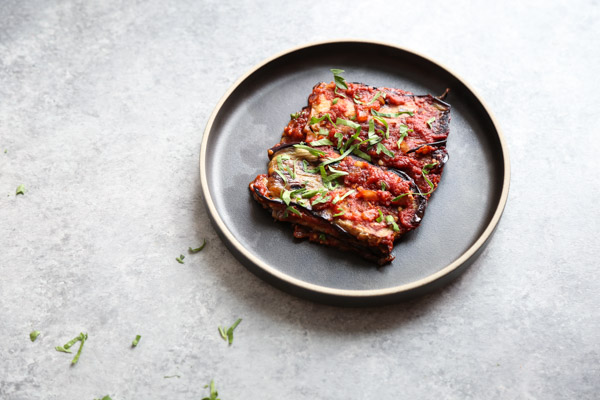 If you haven’t noticed by now, or gotten the picture from the above, I view fat as an essential nutrient, and I actively add it to my diet in healthy amounts and diverse forms. Like any food, too much of a good thing is, for lack of more technical nutritional jargon, bad. So I do try to switch up my oils from day to day, usually between olive, coconut, sunflower, flax seed, and canola.

But olive oil will always have my heart. Growing up, my mother had at least 5 large bottles of it on hand, and I would watch her blow through them in a matter of weeks. There’s a story in my book about the way she would spoon-feed herself frozen peas in a bath of olive oil so deep, from far away, you’d think she was eating soup. Despite these questionable habits, my mother remains to this day, the most health-conscious woman I know. And she’s always ten years ahead of a trend, if her pre-millennial love of millet is any indication.

If there’s one fad that her life-long love of olive oil fits under it’s the newly coined “Mediterranean Diet”—otherwise known throughout eternity as the way Greek people eat. When I explore new cuisines, I love generically asking at restaurants for a side of “sauce” to see what they bring. In Greece, when I did this, what I got was a sauceboat of pure chartreuse-tinged olive oil. And I was more than fine with that outcome. 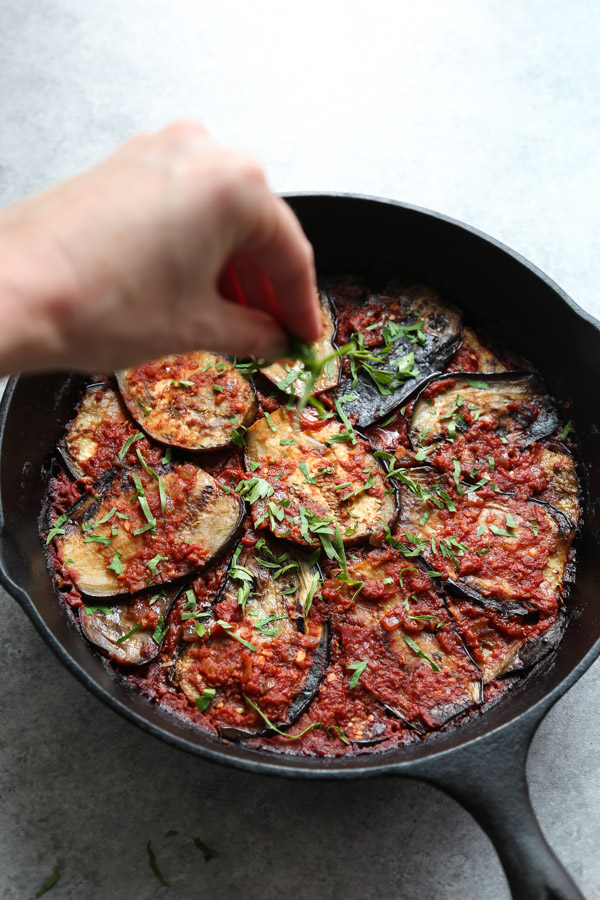 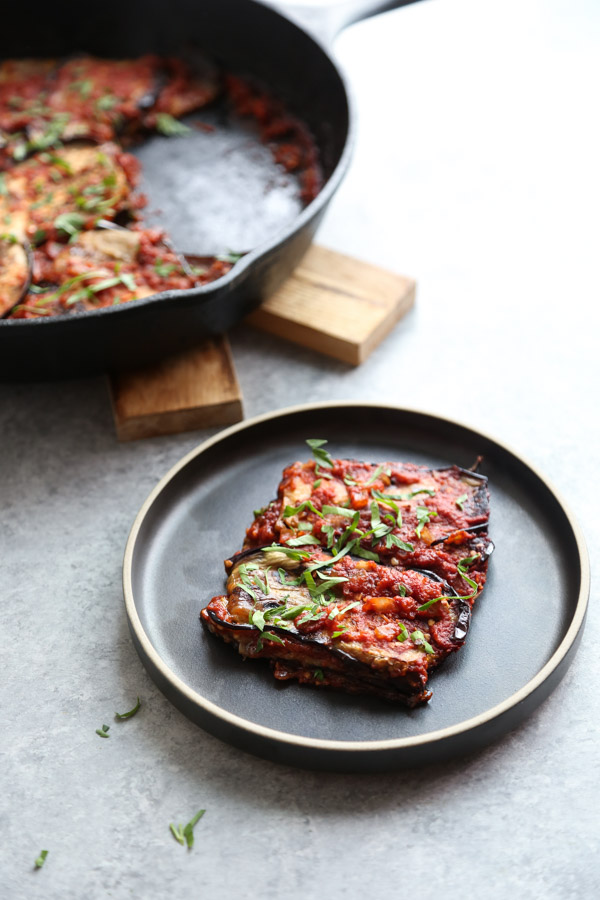 I make no apologies for the not-so restrained amounts of olive oil I add to all my recipes. And despite my justifications above, I certainly make no apologies for adding it in even looser volumes to the recipes I’m attempting to recreate from my Greek travels. I’m just adhering to the trends, people.

One of my favorite dishes from my recent trip was Imam Bayildi from a little Taverna in Hydra. The pan-fried eggplant casserole is technically a Turkish dish, but I saw it on plenty of menus throughout Greece. It’s baked with tomatoes, garlic, and herbs and served room temperature in a lasagna-like slab. One slice is so decadent and delicious in its simplicity, you might almost forget about your old friend from across the Aegean, Eggplant Parmesan. And she was a terrible influence anyway. 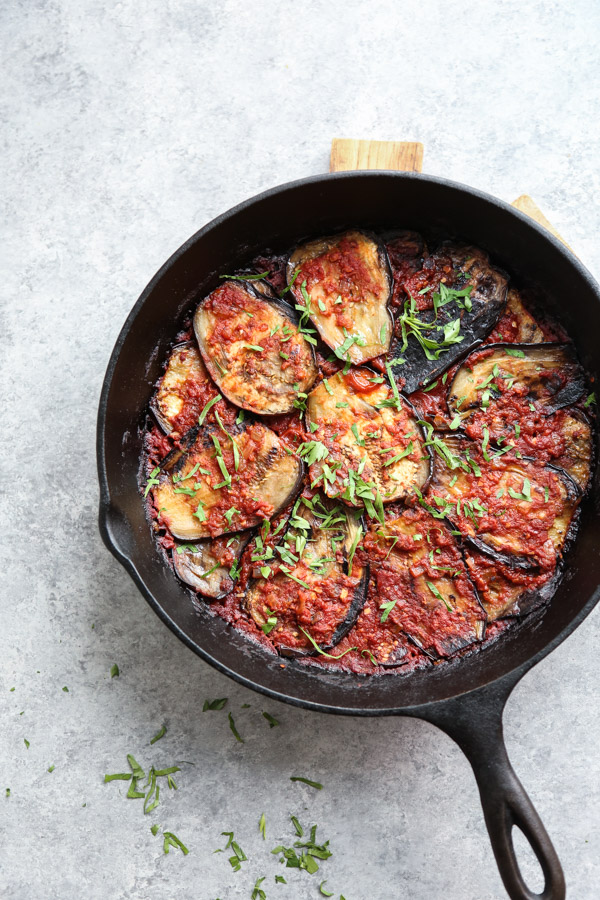 There are far worse dishes on the axis of food evil than a plate full of eggplant, olive oil and tomatoes. So for those of you who would rather eat fat than inject it into your face, here’s to a delicious (and healthy!!!) way to get your olive oil transfusion with a side of vegetables. 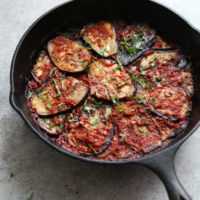 4.87 from 36 votes
Print Recipe
This Turkish eggplant recipe "Imam Bayildi" is a perfect vegetarian weeknight dinner. It's great for making ahead of time, as the flavors only get better. Inspired by The Greek Vegetarian.
Prep Time 20 minutes
Cook Time 15 minutes
Total Time 1 hour 20 minutes
Servings 6

I streamlined this recipe by using an oven proof skillet to fry the eggplant, cook the sauce, and then make the casserole. If you don't have a cast iron skillet, feel free to use a casserole dish instead.

Need help finding lifestyle changes that last? Let’s work together to find your path forward. My 4 Weeks to Wellness Course might just change your life.