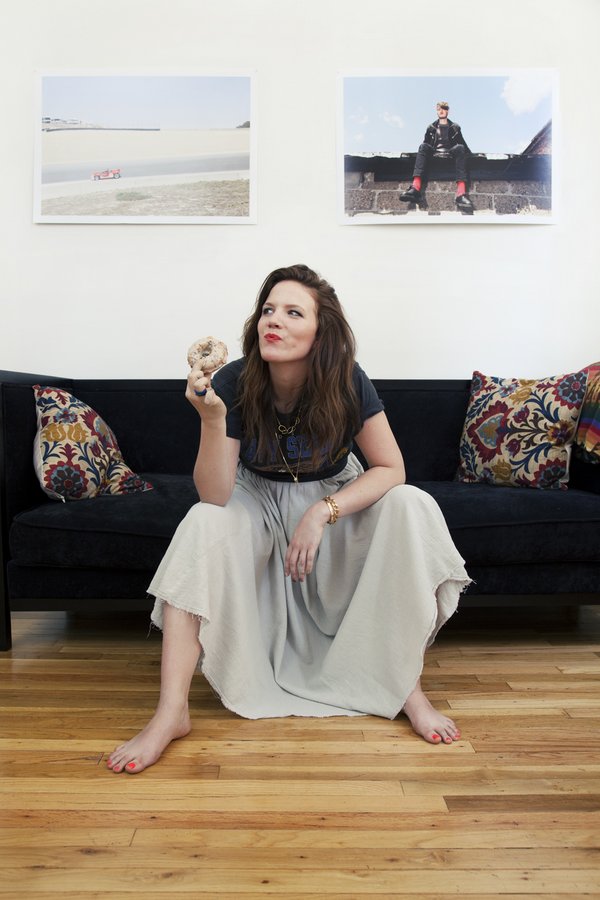 Last week, to kick off the Fall season of my Wellness Wednesday series, I sat down with Isabel Foxen Duke, the founder of Stop Fighting Food. We talked about emotional eating, the diet-binge cycle, and what it takes to finally stop eating an entire jar of nutella at 1am when no one’s looking.

I think there are very few women who can claim that they haven’t been touched by disordered eating at some stage of their lives—even if it was just by way of watching a friend struggle through a troubled relationship with food. It’s certainly not something I’ve openly touched upon on this site, though my philosophy on food—eating a lot of nutritious ingredients, while never depriving yourself of your cravings—certainly stems from a very anti-diet and self-restriction standpoint. But it’s hard to talk someone into adding 1/4 of olive oil to their eggplant, if there are so many questions about food sapping their mental energy.

These are all the issues Isabel’s program Stop Fighting Food deals with. If they sound at all familiar to you, read on for some strategies that I pulled from our Wellness Wednesday hangout on how to start having a healthier relationship with food. And for more, definitely sign up for the Stop Fighting Food Video Training Series to get Isabel’s 3 free videos!

1. Break the diet-binge cycle by eliminating ‘fuck it’ eating.

When women are obsessed with food they often find themselves trapped in the diet binge cycle. They’ll be really “good” one day and then fall off the wagon and all of a sudden there goes the whole box of chocolate chip cookies when no one’s looking. “There’s a lot of this sort of secretive, hiding behavior, lots of shame around food, particularly when we’re not eating perfectly—which no one ever does.” The guilt perpetuates itself and can further more negative and self destructive behaviors, says Isabel. “It’s like oh my gosh I feel so guilty that I broke my diet or broke the way I’m supposed to eat. Now screw it.”

“I call it ‘fuck it’ eating. I’m going to eat the whole thing and then tomorrow I’ll be good again. It’s a cycle that women find themselves in and most women feel really alone in that cycle. They don’t realize that this is something that huge numbers of women to some degree or another are dealing with because there’s so much pressure on women and food in our society.”

2. Change your language and remove the morality from food.

My ex-boyfriend used to get mad at me when I would call my gluten slip-ups “cheating.” And now I see his point. I was fully aware of the consequences of eating something that my body couldn’t process. It wasn’t a matter of gluten being good or bad by nature.

“Traditional diet culture basically gives certain foods morality,” says Isabel. “It’s righteous to eat one way or another. And it’s that righteousness, that morality around food that ultimately ends up creating this diet-binge cycle, right?”

This is an important mind-set shift that I’ve had to work on within the framework of my own dietary constraints. I can eat gluten, but I know that the result will make me sick. There’s no morality around that choice—I’m not a bad person if I eat gluten. I’ll just be an increasingly less fun one as I retire to the fetal position after dinner.

If you eliminate this notion of good/bad from the equation, Isabel says that emotional eating doesn’t have to be a bad thing. “If we look at emotional eating from a value neutral, non-moralizing standpoint, it is just eating your feelings. It gives you temporary relief. It doesn’t solve any of your problems, so using it over and over and over again is probably not the best way to go. However it is an immediate way to cope.” Coping mechanisms can span the gamut from taking a warm bath to snorting heroin. Isabel says emotional eating falls somewhere in the middle, but can be far less harmless if you understand your motivations.

“I would make the argument that having the occasional cupcake when I feel like I want a little pick me up is really not the end of the world. In fact that might be a really reasonable way for me to get a little like excitement that day. I want women to feel empowered and feel like they can decide when it’s appropriate to have a cupcake and when it’s appropriate to have a cookie as an aware choice.”

4. Treat your body as you would your child or pet.

That phrasing is very important. One of Isabel’s strategies for shifting our body mindset is to treat and talk to our body like it’s a pet or child. “I think that’s a big mental shift for people–to not look at your body as something that you’re supposed to control and contort and enslave, but actually look at your body as a living, breathing organism that needs to be cared for.”

Body image work is so critical at every size on the weight spectrum, says Isabel. One tactic is to start a gratitude practice specifically focused on your body. “Thinking about what your body’s been through and what it’s done for you is huge…Like, my little heart keeps beating regardless of the fact that I tortured it so much in college with all that crazy binge eating. I have put my body through such hell and it just keeps fighting to keep me alive.” A big part of the gratitude practice is realizing “my body’s got my back, so I should get its back.”

6. Surround yourself with images of real women.

There are all sorts of brands on the internet that are promoting positive body image these days. Go on a media diet of sorts and start to bring images of people of varying shapes and sizes into your space. “Inviting body diversity into your visual world, has been proven to change the way women think about their own bodies,” says Isabel. “My instagram feed is filled up with natural models and real people. Media is very powerful and it’s definitely a really big part of this problem.”

If you’re still struggling with your relationship with food and haven’t already signed up for the Stop Fighting Food Video Training Series, enter your name and email to get Isabel’s 3 free training videos!”