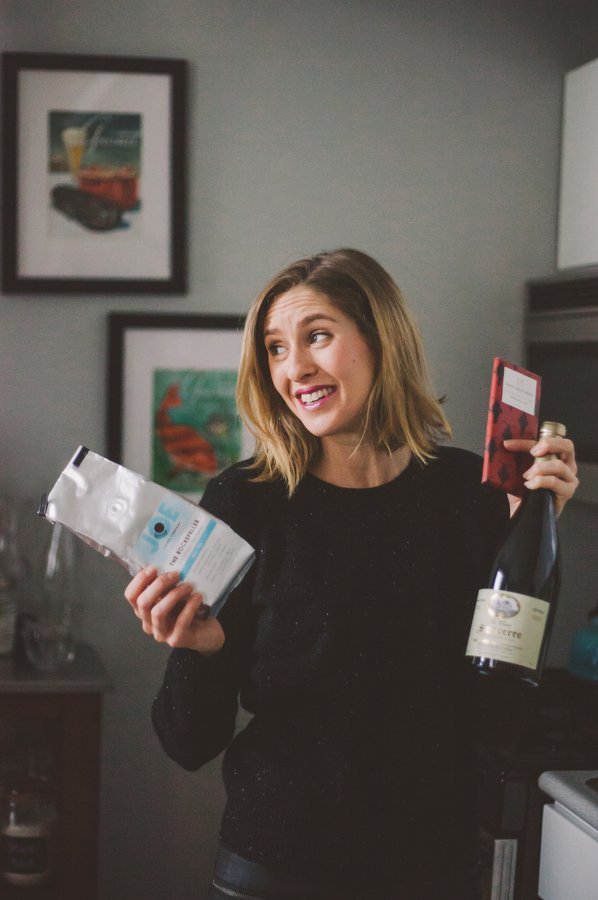 This experiment, though incredibly difficult, was probably one of the most important things I’ve ever done for my health. Aside from gluten, it was the strictest I’ve been in overhauling my habits. (See here for the protocol I followed).

The reason why I chose to do this challenge in the first place was because my skin was a disaster. Nothing seemed to be kicking my adult acne, and I’d gotten fed up with the crazy panoply of pills my dermatologist had put me on—none of which made any difference that lasted longer than a week. So eventually I found my way to a more integrated practitioner who suggested that there could be something wrong with my liver if toxins were getting evacuated via an exit ramp to my face.

I’ll talk a little bit more about the skin’s connection to the liver next month when we delve into Green Beauty. But as far as this experiment goes, you should know that giving my liver a rest really worked. I took a makeup free selfie every morning and by the end of the month, my skin was significantly better. And to this day, even though I’ve obviously been on the retox train ever since, my face has never returned to its previous state of chaos.

If the best part of my liver detox was seeing the physical improvements in my body, the biggest lesson in the retox was discovering the emotional source of my cravings.

I’ve broken down my experience by vice, from most difficult to least. I actually tried to do sugar again this month and was much less successful than last year, if the pint of black raspberry ice cream I accidentally ate last weekend is any indication.

Read on for verdict! 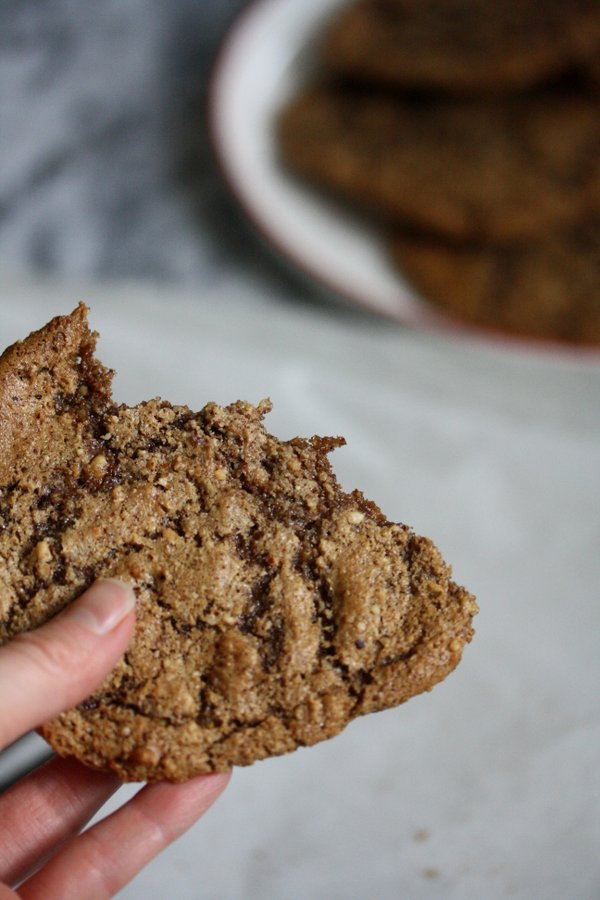 To not eat added sugar is to not eat processed foods—which is NOT EASY.

Needless to say, I was relatively imperfect on this front, though I did try my best to limit packaged foods and avoid eating out at restaurants that I knew would have a very sugar-filled menu (think any Asian cuisine).

My biggest struggle at first was breakfast. But I remedied this by switching from sugary breakfast bars to homemade smoothies. I also started eating a lot more of the things in my fridge that are not usually consumed before noon. Things like leftover kale salad or Chicken Chile Verde at 8am.

More so than the physical cravings, which were real and scary, I realized that I use sweets (specifically chocolate bars and macaroons) to reward myself for either good behavior (the excellent freelance article I wrote) or unfair misery (the 5 vaccines I had to get in my arm for my Africa trip). I missed having something that felt like a treat, so found myself spending my French cookie money on massages at the local Korean nail salon instead.

I used to also feel like I needed something sweet to cleanse my palate after a meal. At the beginning of my detox, my dinners didn’t feel complete without a bite or two of dessert. But this was surprisingly one of the easiest habits to break by the end of the month.

Now I know that I don’t want chocolate as badly as the Cadbury bunny tells me I do. And that’s an empowering feeling, even if after success or trauma I still want to reach for a sweet treat as a gift to myself.

Less empowering was how difficult sugar was to avoid across the board, even with the best intentions. While alcohol and caffeine were easy to regulate, sugar was really hard to wrap my consciousness around, so I often found myself cheating…sometimes unknowingly.

Many researchers have likened the brain on sugar to the responses seen when it encounters hard drugs like cocaine. But I found that my relentless want of sugar was less chemical in nature and more due to another type of brainwashing—the fact that it’s literally everywhere. Sugar is tucked away in every crevice of a 100 item Chinese takeout menu. It’s on the screen of our TV’s, staring me down from the top of a swirling waterfall of Twix caramel. And it’s at the checkout counter of the gas station, the pharmacy, and often times even at the doctor’s office.

Looking at food labels and trying to regulate your sugar intake is an uphill battle, one that involves a lot of middle school math, which some of us expelled from our consciousness several decades ago. Because of this, as I strive for moderation going forward, I try not to drive myself crazy calculating sugar on the back of packages. But I do try to read the ingredient labels in the first place. And if I see 36 grams of sugar on the back of a Blueprint Juice, I now know that it’s probably not as good for me as I think it is.

I definitely still fall in a big way for desserts as a special treat, if last weekend’s ice cream is any indication. But I’ve significantly cut down on my daily habits and am generally a lot more aware of what I’m eating, like that the bag of Thai flavor Kettle potato chips I recently inhaled had three types of sugar in its ingredient list. 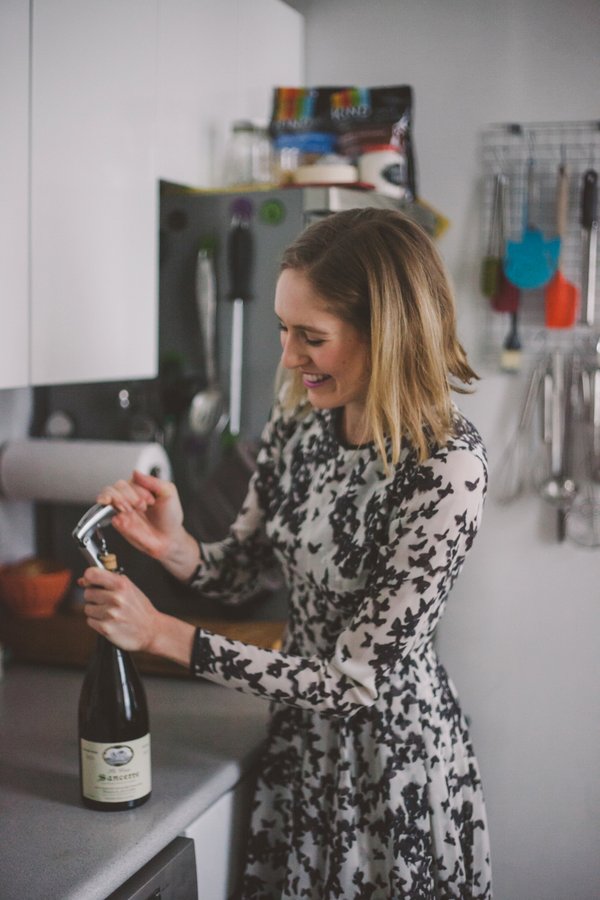 2. Giving up alcohol made me feel lonely and isolated.

The biggest social experiment was of course the alcohol. And my issues turned out not to be what I expected.

I found that the worst part of not drinking was an intense feeling of isolation. As it turned out, sober dancing at weddings was a lot easier for me than being at a table with some of my favorite people while they enjoyed good wine and progressively started getting more fun and telling stupider jokes while I sat there drinking water as a wave of loser fatigue passed over me.

I went to two wonderful dinner parties with the best food and company a girl could ask for. So it’s a shame that not drinking made much of a difference at all. But it did. And I think it had less to do with getting drunk than feeling alienated from the group. This wasn’t a fear of missing out. I was missing out. And what I was missing involved Lambrusco and flourless chocolate cake.

By the end of both nights, I ended up craving quiet time with Charlie even more than a glass of wine. I needed to feel a sense of connection. But it was hard for him to hide his disappointment when I made him head home early instead of heading out on the town. Which just made me feel worse.

As much as I was enjoying the hangover free mornings and the fact that I was now the cheapest date ever (more money for chia seeds and kefir in my smoothies!), this healthy hedonist needed to get back on the sauce. Finding moderation since though has been an even more daunting task (see my strategies for better boozing).

If there was any immediate impact of my alcohol detox it’s that I instantly became a wine snob. This is not something I would ordinarily want to be. But it wasn’t such a bad thing to embrace in the name of my health. I’ve tried to start drinking for taste. I sip slower, and if that first sip causes my nose to wrinkle, I casually put down my plastic cup of gallery opening $5 buck chuck and proceeded to socialize hands free.

I also noticed the times when I didn’t miss alcohol—all those weeknight catch-up dinners with friends where I didn’t want to spend $15 on a glass that tasted good when there were so many other delicious things to drink up at the table (for free!)—things like hearing about my friend’s new job offer and talking about the awkward toasts from weddings past.

In New York City, it’s amazing how quickly that requisite glass of wine at dinner can start to feel mandatory, even over a home cooked meal on a Monday. It made me wonder: how many people out there are drinking just because they feel they have to? Because they feel it’s easier than just saying say no? I thought that at 29, I had out grown peer pressure. But maybe we never really do. 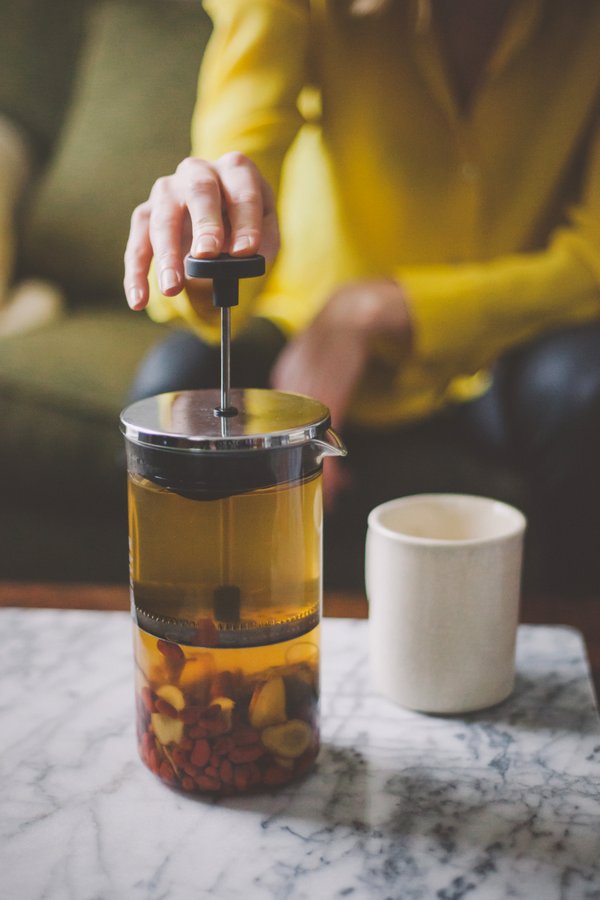 I was shocked how little I missed caffeine by the end of the month. After the initial hump, it turned out to be no big deal. My energy levels were great, probably partially because of the absence of tequila shots and chocolate macaroon sugar rushes. But still, if I wasn’t hauling ass, it seemed silly to drink an obligatory cup of coffee.

With caffeine, I noticed that I was driven by ritual. I needed something to signal to my brain in the morning that the day had begun and it was time to stop dreaming about unicorns. But that thing could just as easily be warm lemon water.

I haven’t really gone back to drinking coffee in the morning. I try to stick with green tea or if I’m feeling perky, something herbal. Occasionally, I miss the taste of coffee, but that is easy enough to remedy as a treat. Ultimately, I want my dependency to remain an emotional one, without getting a headache or feeling lost if I don’t have fresh ground beans in close proximity. 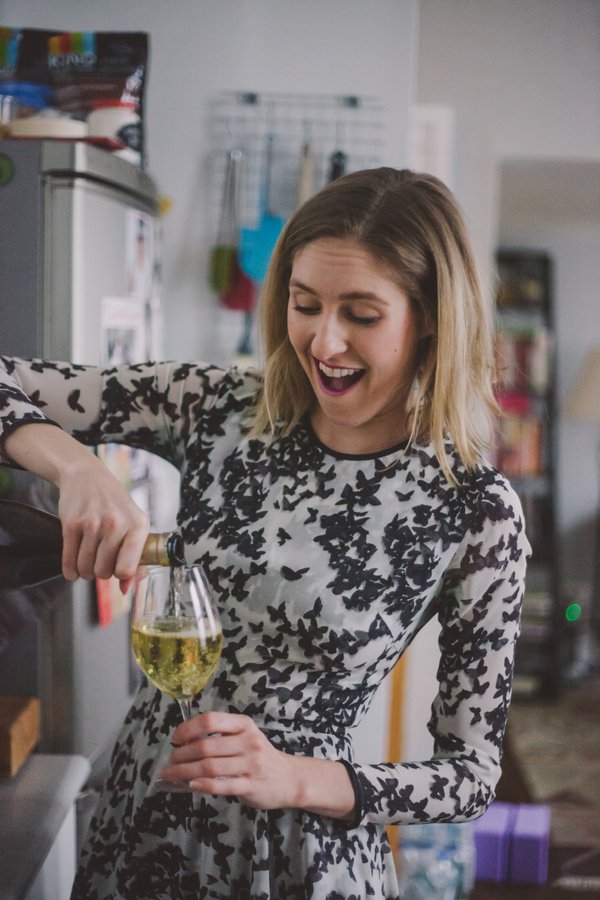 Did you try giving up any of these vices this month? Let me know how your experience stacked up to mine in the comments! And CHEERS to you for making it through. Now…have a drink!

The Wellness Project is now a book! It’s part memoir, part health primer, with 20 inflammation fighting recipes for clearer skin, better digestion, and a thriving thyroid. (Because who doesn’t wake up in the morning wanting a thriving thyroid?!). You can read more and order here.

Need help finding lifestyle changes that last? Let’s work together to find your path forward. My 4 Weeks to Wellness Course might just change your life. With 4-weeks worth of recipes that are gluten, dairy, corn, soy and refined sugar free, not to mention tasty AF, it’s a perfect way to explore your food sensitivities and heal inner and outer chaos.