When I switched to all-natural, non-toxic products during The Wellness Project, there were some that were easier than others. My biggest gripe was the one that didn’t seem to have any solutions that benefited my hedonism as much as it protected my health. And that was deodorant. 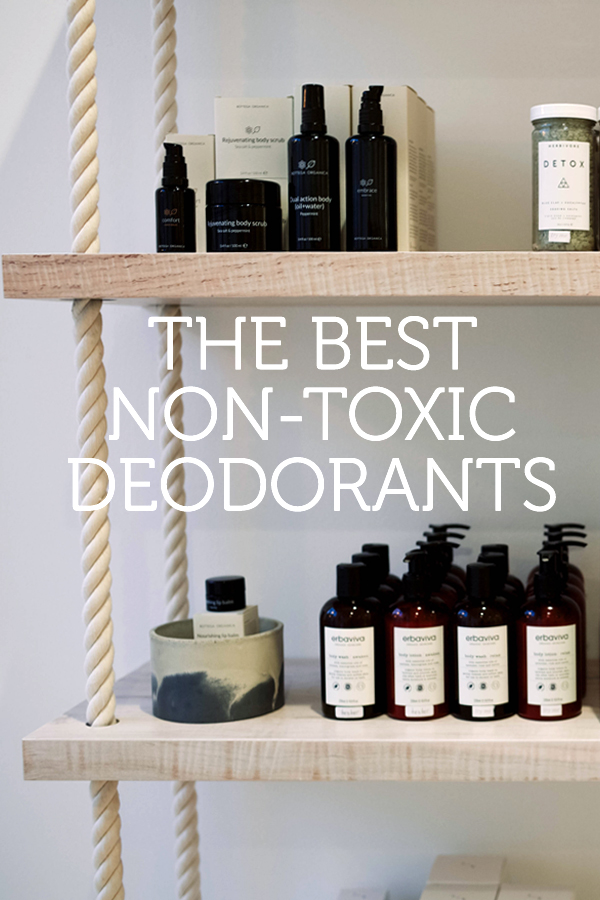 As the OG organic health nut in my life, my mother deployed scare tactics at an early age when it came to the aluminum in antiperspirants. And while I pleaded ignorance during her rants on the cottonseed oil in my Oreos, I had to at least admit to myself that when it came to putting harsh chemicals near our breast ducts, she did have a point.

Still, it was awkward enough to be the only girl in the locker room with mosquito bites for boobs, so I wasn’t also going to be the token one who smelled like the inside of a New York taxi cab. Behind her back, I kept an arsenal of powder fresh Secret in my gym bag, while going through the motions at home with my rock hard all-natural crystal stick that did nothing.

So why should women use natural deodorant?

Well since the dog days of high school, there has been more concrete research to back up my mom’s theory that putting aluminum in our armpits actually leads to breast cancer. The European Journal of Cancer Prevention sited one small study that indicated that those who shaved their underarms at least three times a week and applied deodorant at least twice weekly were almost 15 years younger when diagnosed with breast cancer than women who did neither. These studies are ultimately hard to fund and require a long timeline, so it may take a while until these claims are officially backed by trial research. But luckily awareness is still spreading.

Harmful ingredients aside, it’s becoming more widely accepted that preventing our bodies from sweating is not good for our overall health. There’s a common-sense argument to be made. And when even Kourtney Kardashian chooses not to wear antiperspirant while nursing, it’s a sign that the common sense is pretty strong.

How do natural deodorants work?

Odor exists as a by-product of our body’s incredible defense system.

Skin flora, the natural bacteria under your arms, helps keep you safe by literally eating the toxins in your sweat. While antiperspirants stop you from schvitzing in the first place, conventional deodorants just kill the skin bacteria, preventing these industrious critters from cleaning the surface of your body.

Natural deodorants, which are usually made with a base of baking soda, charcoal or clay, absorb the odor instead of killing your flora.

When I started my wellness project, I went with the gateway natural brand Tom’s of Maine , which mixed with a little more “eau de moi” with lavender than I would have liked. It also left the pits of my white t-shirts tinged yellow. Needless to say, these were healthy hedonism side effects I wasn’t thrilled about.

But in the two years since, I’ve gone far beyond the Whole Foods aisle and found some fantastic natural deodorants. And they actually work.

A few things to note before switching to natural deodorant:

Read on for the list of my favorite natural aluminum-free deodorants for women, in order of best to worst. There are so many options now that I’m still in the process of trying all of them. To round out my list, I included some recommendations from readers – I look forward to giving your advice a go!

From one healthy (not stanky!) hedonist, to another, 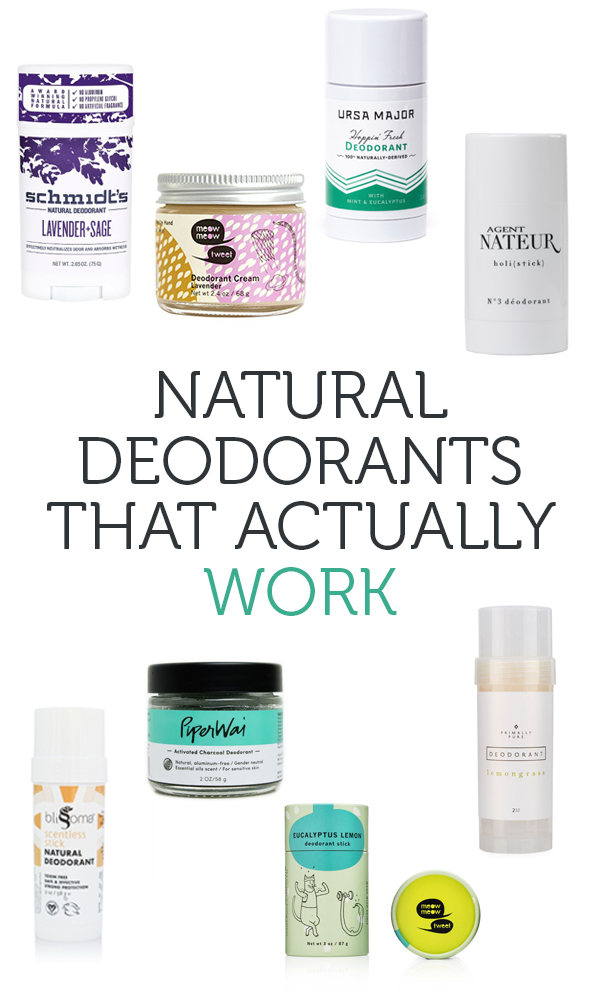 Zion Health Clay Dry Deodorant Sticks
Rating: A
Pro’s: This deodorant is proof that good things sometimes come in slightly dated packages. I hadn’t heard of this brand from any readers or green beauty boutiques that I frequent, but when someone from the company reached out, I agreed to give their sticks a go. Dear god, I’m so happy I did. They apply like any conventional stick deodorant and last like none other. Most natural deodorants need to be applied on clean skin to work. And they usually wear off by the following morning. Zion Health’s clay formula kept out the stank and seemed to be quite absorbent for my sweat too without any clothing stains from the coconut oil base.
Con’s: I didn’t really love the scents I tried. The Eucalyptus was better than the rose, but both still smelled a little synthetic, even though they aren’t. I much preferred some of the other brands scents. But ultimately I’d take any scent over my own odor. It also has baking soda in the ingredient list. Something to note for those who are sensitive.

Piperwai Charcoal Cream Deodorant
Rating: A-
Pro’s: Of the 10+ natural deodorants I’ve tried, this is my favorite. I’m such a fan, that I’ve even gotten over the cream self-application to support it, but good news for those who aren’t “there yet”: they just launched a stick version! I can’t vouch for that application, but I can say with confidence that the charcoal base of Piperwai makes it one of the few natural options that both absorbs odor and cuts down on sweat. My pits always feel drier when I apply it after the shower, and it truly lasts all day. A big benefit of this brand is that a little goes a long way. I use less than a pea-sized amount and it rubs in smooth.
Cons: Unlike Soapwalla cream below, Piperwai is more of a thick paste so it can be hard to get out of the glass jar. When I bought my first jar (before they rebranded) you could get a small applicator stick for $7. It was a bit of a rip off, but was helpful. You could easily use a small spoon though from your kitchen or a coffee stirrer.

Meow Meow Tweet Lemon Eucalyptus Deodorant Stick
Rating: A-
Pro’s: This is by far the best all-around stick deodorant I’ve found. It goes on smooth and doesn’t leave any residue. Charlie has found it very usable (no hair clumps!) and likes the scent for men. The formula  is vegan and the packaging is a biodegradable cardboard tube – so no waste to boot!
Cons: The tube can be a little hard to push up and down in the cardboard container and my lid top broke after a few uses. I also occasionally have to reapply by the end of the day, but having a stick makes that much easier. You can also find this formula in a glass jar cream version.

Soapwalla Deodorant Cream
Rating: B+
Pro’s: I’ve kept the travel sized Soapwalla pot in my dopp for over a year for when I forgot my go-to sticks, and it truly lasts forever! The standard scent is fairly neutral with a slight minty quality, which I like. It’s also a non-baking soda option, instead using clay and organic cornstarch (if you’re wondering why it’s still a white paste).
Cons: If you’re still not on board with creams, you’re out of luck here. It’s on the thicker side too, so not ideal for men with a lot of hair, even though the scent is a great unisex option.

Schmidt’s Bergamot + Lime Stick
Rating: B
Pro’s: Schmidt’s has become one of the most widely known and used of the natural brands, and I understand why. They have fantastic scents (readers have raved about Lavender + Sage), cute packaging that feels like the conventional deodorants we grew up with, and even handy dandy travel sizes!
Cons: This is a baking-soda based deodorant that can go on thick and leave some residue on your skin. My biggest cons though were that is ran out fast and didn’t stay on long. My travel size didn’t even last a month (and I wasn’t using it every day). But on the other hand, it’s also one of the cheaper sticks in the lot. I’d definitely give it a solid B and seal of approval as the gold standard for gateway natural deo’s. Start here instead of Tom’s! I should also note that they make creams as well.

Ursa Major Hoppin’ Fresh Stick
Rating: B-
Pro’s: I’m a big fan of Ursa Major’s other products, specifically their face wash, and loved the minty smell (good unisex option) and texture of this stick. It goes on smooth and easy, has a non-chalky finish (which is rare for a baking soda-based deo), and didn’t appear to leave any staining.
Cons: Ultimately, this stick, though I wanted to love it, didn’t tame the stank for the full day and I found myself having to reapply.

Blissoma’s Scentless Stick
Rating: B-
Pro’s: This was one of the first sticks I found since the Tom’s of Maine fiasco that actually worked. Charlie was extremely relieved once I incorporated it into my routine.
Cons: Though I’m attached to Blissoma as one of my first natural deodorant loves, it’s texture can be inconsistent and a little rough at times on your pits, especially if you’ve just shaved. I also found that it was one of the worst offenders for staining, both in turning white shirts yellow, and leaving residue. Sorry old friend!

All of these got multiple thumbs up from Feed Me Phoebe readers, so may be worth a try! I’ll add them to the above list as I have a chance to test them.

Primally Pure: The sensitive stick got more recommendations than any other brand. I just bought it in Lemongrass and can’t wait to give it a try. One reader did mention that there is slight staining, probably due to oils in the formula. Primally Pure has a great article on their site that explains some of the pitfalls (har har) of switching to their formula and how you can avoid them.

Agent Nateur: A stick deo that also got honorable mention in this article on how to switch to natural deodorants.

Native Stick Deodorant: Though I haven’t tried it yet, there are a lot of oils in here so be mindful of staining.

Captain Blakenships Lime and Vetiver: It’s a cream deodorant that was recommended by a member of the Hashi Posse and The Wellness Project Launch Team, so I trust her judgement!

Primal Pit Paste: The lavender stick got two thumbs up.

Kimberly Snyder’s Homemade Deodorant Recipe: For those looking for a DIY option!

Mother Dirt: Another book team member is going through the process of training her pit bacteria with the mother dirt AO spray. Definitely a cool tactic for those who want to wear no deodorant at all!