The path of my relationship could potentially be traced in discarded oyster shells. In the case of our recent trip to Seattle, Oregon and California—and the grilled oysters from Hog Island that inspired today’s recipe—those bivalves were coupled with lots of happy food memories. But on a few occasions towards the beginning of our courtship (nearly three years ago!), oysters were the centerpiece of awkwardness–the kind that often plagues first encounters with someone you have a big, radiating crush on. 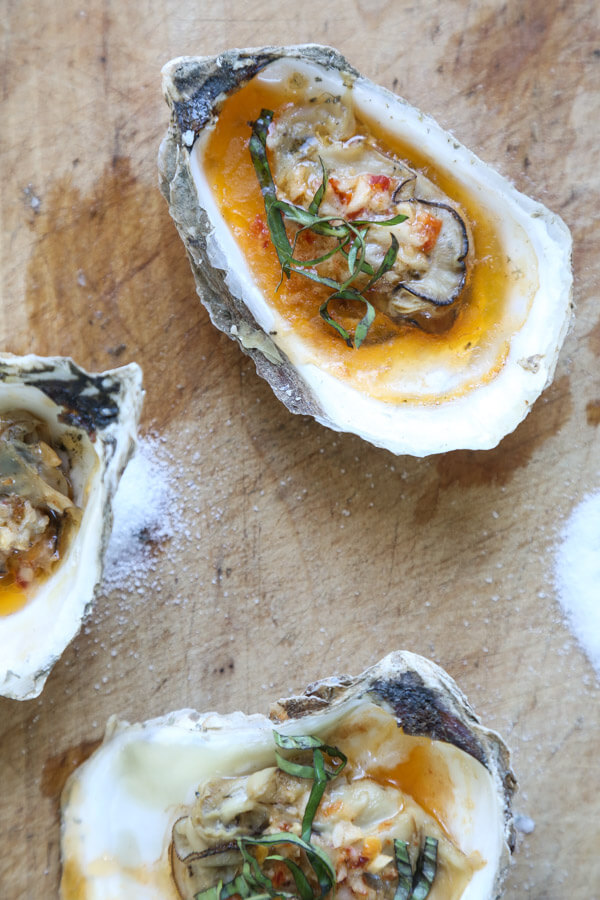 For our second dinner date, Charlie took me to one of his favorite restaurants in Brooklyn. Unsurprisingly, for I already knew he was a class A hedonist, his ideal meal from the menu consisted of a dozen oysters and a fois gras terrine to start, followed by the venison. He also told me that when he lived in the area, he often sat at the bar on weeknights and ordered the 5-course tasting menu by himself. It was, apparently, a great deal.

As I pictured us growing old together—me in the kitchen with a linen smock dress and Diane Keaten-esque shaggy lob, Charlie in the study, his smoking jacket covering a belly that had submitted to the duress of years of goose liver and camembert—the first oyster reached my lips, and this fantasy was replaced by a more pressing fear of food poisoning.

What was usually a refreshing gulp of cooling sea water and brine, had the funk of a seafood counter cutting board that hadn’t been cleaned in a week. Our faces soured in unison, and I could see Charlie’s inner dialogue fill with panic. 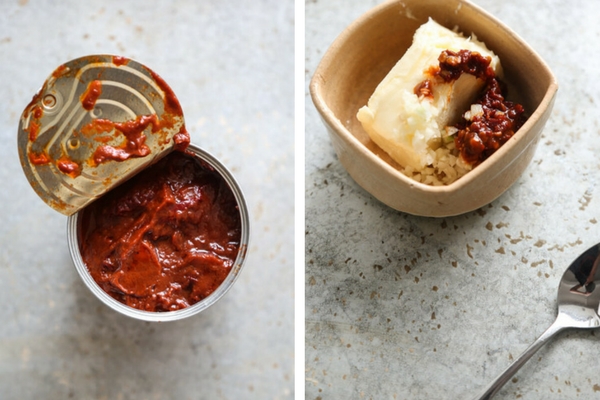 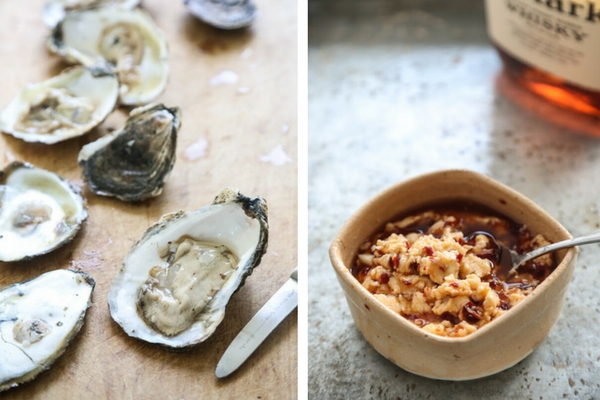 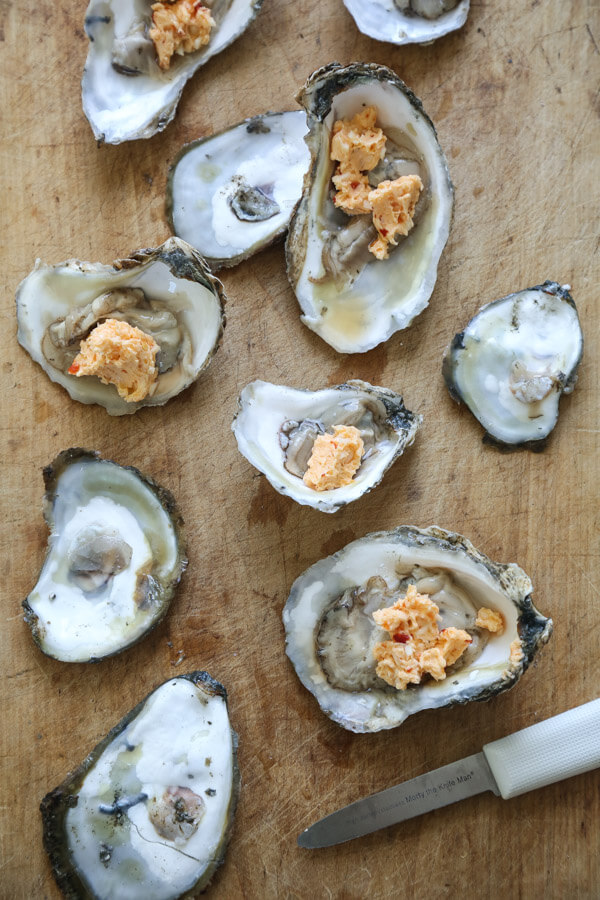 What did it say about his taste in food that he had brought us to a restaurant with spoiled seafood? Could any amount of fois gras pate make up for such an offense? Should we send them back? Or hope that the first two were a fluke and eat the remaining dozen?

I, on the other hand, was focusing more on the small matter of what these oysters would do to our insides during the proceeding 24 hours. Could we even go home together knowing that we might end up side by side on the bathroom floor?

Ordinarily, I would have immediately notified the server and returned the metal basin to the kitchen. But my own internal debate compelled me to quiet my pushy side in favor of Charlie’s unconfrontational ways. Instead of speaking up, I flipped the remaining oysters shell-side up. The waiter cleared the presumably empty platter, and we summoned the power of selective memory and went on to enjoy our remaining dishes from the land.

When you get a bad mollusk you know it immediately. But like the tequila shot that broke the camel’s back, it’s too late to do anything but await the consequences. Perhaps it was good karma for giving the server and kitchen staff a pass, but this time the bad oysters let us off easy (the hangover equivalent of a full pardon). And without the painful aftermath, I soon forgot about that part of the meal altogether.

It wasn’t until months later that I found out (through Charlie’s mother) that my oyster empathy was what really sealed the deal. And though my pushy outspoken side is the one I wear on my sleeve most days, it is nice to remember that keeping a complaint inside doesn’t always poison the well.

Luckily, our three years of joint oyster experiences have only gone uphill from there. And some of the best highlights have been pulled out of the waters of Tomales Bay.

Thanks to endless wedding season, Charlie and I have developed a little tradition of spending a few nights in Inverness every time a friend gets married in California. When we do, a stop at Hog Island Oyster Company across the bay is a must. Their oysters can be found on menus across the country, but never are they more sweet and subtle than when they’re served on the wooden patio, after being plucked straight from the sea five feet away. (For the record, when we’re home, we rarely order varieties from the West Coast thanks to that second date incident!). 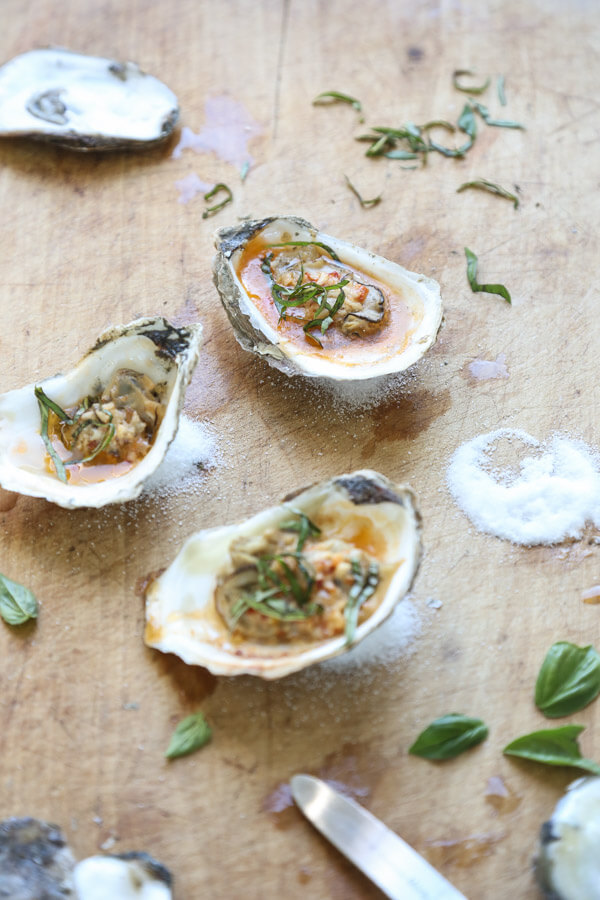 It seems sacrilege to mess with a food that’s so perfect in its pure, unaltered state. But once you taste the Bourbon Chipotle Butter, which Hog Island slathers on their chargrilled oysters before throwing them on the BBQ, you realize it would be a crime not to doctor them from time to time.

We usually don’t manage to leave Tomales Bay without having ordered a second round of these BBQ oysters. The melted chipotle bourbon butter mixes with the salty oyster brine, and arrives bubbling within the deep trough of the shell. The garlic, honey and hot peppers that cling to the meaty surface of the oyster caramelize just enough so that their flavors don’t overpower the seafood. And the whole thing goes down like a sweet, buttery pillow.

I’ve adapted the butter recipe from Hog Island’s website to suit a dozen oysters, as I can’t imagine you would want to shuck more than that at home. Once you’ve gone through the extra effort of opening the shells, though, these oysters only take 3 minutes to cook on the grill or under the broiler. And if there’s ever a time for a little bit of extra hedonism in butter form, it’s during the last few days of summer.

So let your hair down this weekend, indulge in a little chipotle bourbon butter, and if you happen to get a bad one in your batch of grilled oysters, just turn over the shell and try to enjoy the party. Charlie and I will be on Martha’s Vineyard, no doubt adding to the trail of oyster shells in our wake.

From one healthy, oyster-loving hedonist, to another, 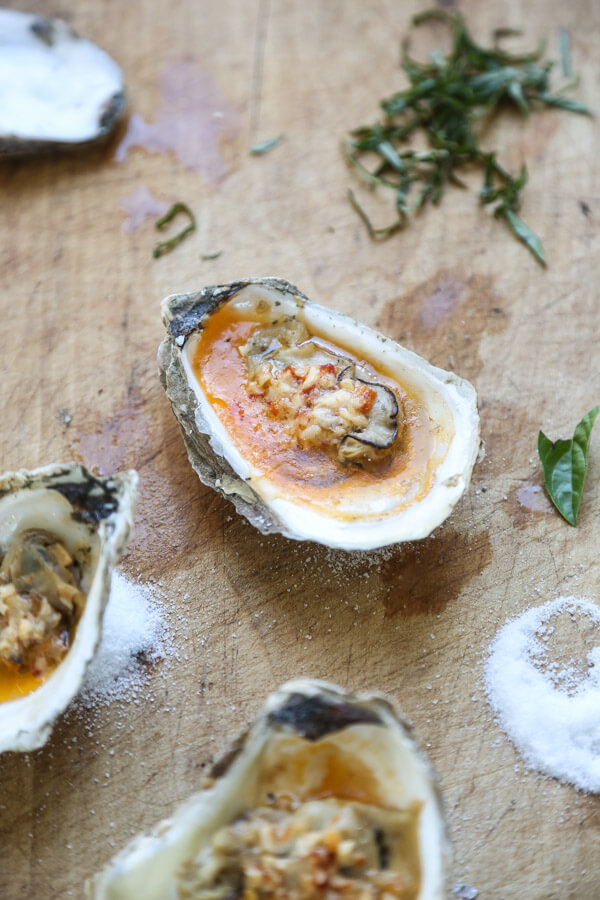 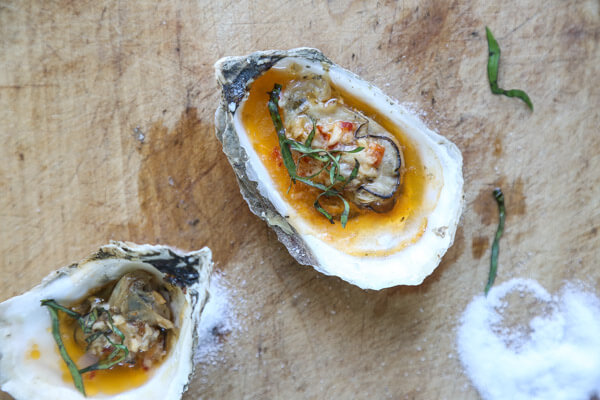 4.34 from 3 votes
print recipe
The addictive chipotle bourbon butter is adapted from Hog Island Oyster Co., which serves legendary grilled oysters at their outpost in Tomales Bay. You can easily make these under the broiler at home if you don't own a grill.
Prep Time 10 minutes
Cook Time 3 minutes
Total Time 15 minutes
Servings 1 dozen oysters
Author Phoebe Lapine

You'll have an easier time incorporating the bourbon into the butter if you use a food processor. But you can just as easily spoon the butter mixture onto the oysters a bit lumpy--it's going to melt anyway! If you're broiling the oysters instead of grilling, use small piles of salt under each shell to keep them upright, otherwise the butter will spill all over the pan.

If you make this, tag @phoebelapine and #feedmephoebe - I'd love to see it!
8771 shares