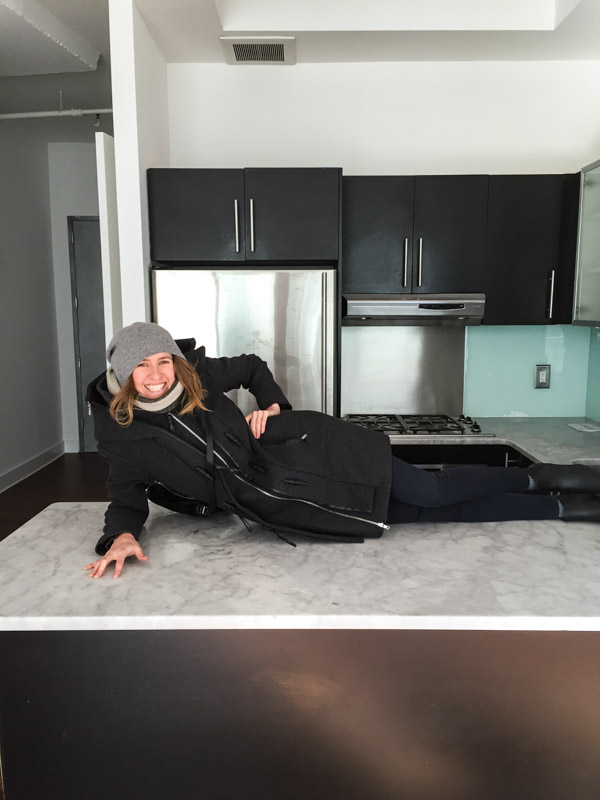 It’s been a whirlwind first two months of the new year, and frankly, I’m still not quite sure where February went. Perhaps I had a sober blackout, since Charlie and I decided to do a dry month, which lead to a lot of metaphorical tears collecting in my water glass. (More on that later.)

When we got back from Brazil in January, I felt a little lost. The book was in. And though I had a mountain of emails to catch up on (what happens when you put an out of office up for 5 months straight), I didn’t quite know what to do with myself. The weeks felt busy, but at the end of them I couldn’t put my finger on what I’d actually done. I was excited to get back into the blog groove, but couldn’t quite decide how to transition out of The Wellness Project series into something else both confessional and structured. 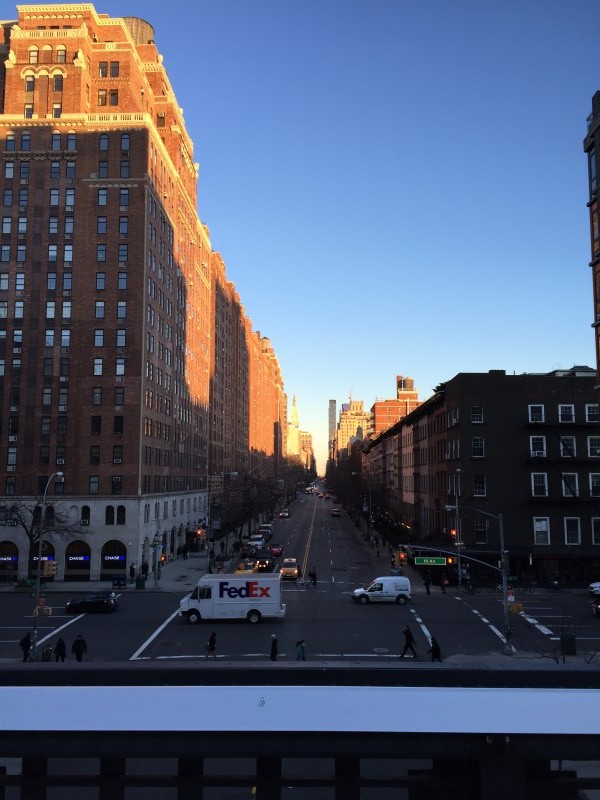 one last goodbye to Chelsea, my home for the past 8 years!

After two months of this necessary floundering (I think my brain just needed a break), I decided to just write you all with some updates. I love how Christina does her check-ins, and Serena her casual Fridays, so in place of the monthly wellness recaps, I’m just going to share with you some snapshots of my current health obsessions, hedonistic preoccupations, and other jams that are contributing to some form of mental mania…like a move. 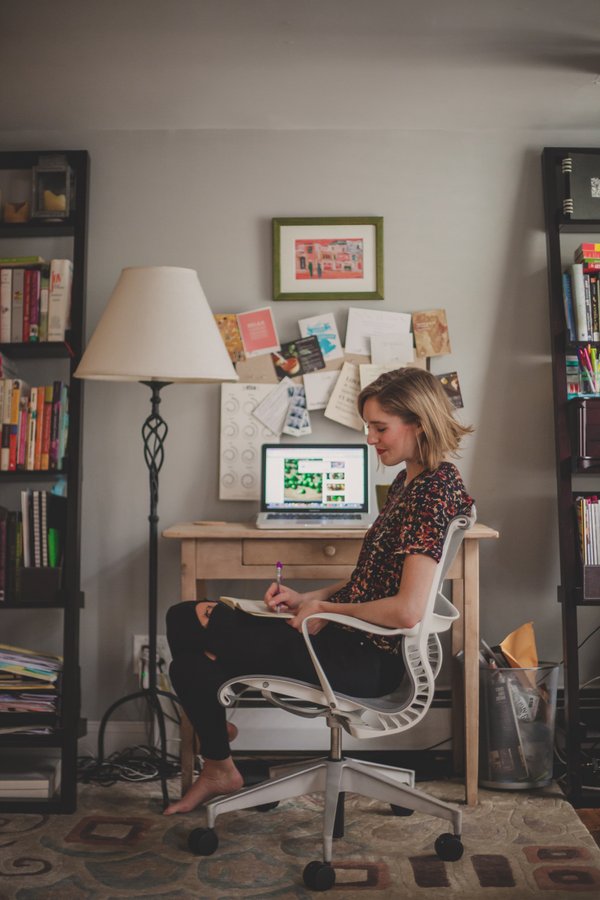 my little studio before the storm… 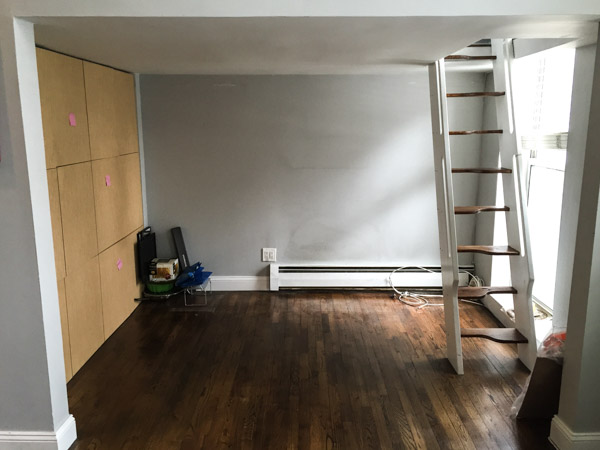 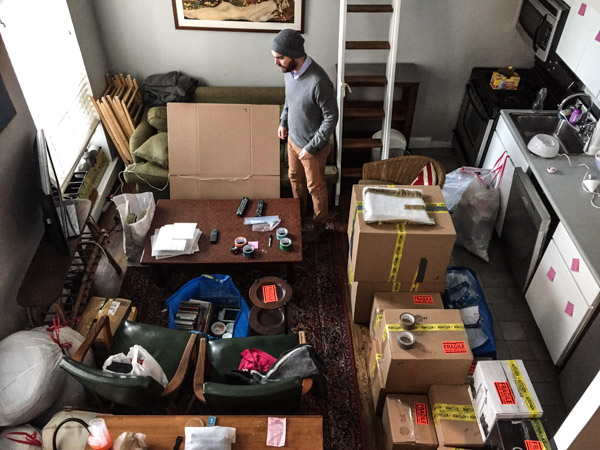 It’s kind of a lie that I don’t know where February went, because most of the month was clearly spent apartment hunting, dehoarding, packing, unpacking, and rehoarding.

Anyone who lives in New York knows how miz the first part of that equation is. And ours was made even more complicated by the fact that were looking for homes both in Brooklyn AND Los Angeles.

I’ve had my eye on LA for some time now. There were moments over the course of my project when I realized how much healthier my life would be with more space, sunshine, and yoga pants. Less black, and more balance. But the dominos were not mine alone to arrange.

Charlie has been well aware of my pesky desire for change, and did his best to set some balls in motion for a move to the West Coast. But there were too many variables outside both of our control. So we decided to dual path our search until we knew where all the pieces would fall. And eventually, it became clear on the professional front that our life was going to be rooted in New York for at least a little while longer.

Luckily, thanks to the good juju of these breakfast pizzas, we found an amazing loft in DUMBO. The kitchen alone had me at hello. Not only will the counters fit more than just a cutting board, but they’re big enough to potentially gather some people around it from time to time for group cooking fun. (More on that too in a minute).

Packing up four years’ worth of crap from my old apartment was a Kim K-sized pain in the butt. But KonMari-ing my apartment definitely help cut down on the number of boxes I needed to haul home from the package store. In fact, I realized that there was a lot of shit in there that didn’t bring me joy. And while I’m not going to be bento-boxing my drawers anytime soon, I was grateful for the permission to say goodbye to the trendy stilettos that pinched my toes, that little black dress that has been so well-loved it’s now a grayish hue, and the tchotchke upon kitchen tchotchke that have been collecting dust in my drawers.

Though Charlie had been squatting at my studio apartment in Chelsea for the last 6 months, the combining of the “stuff” definitely brought our cohabitation experiment to the next level. And the Kon-Mari halo effect forced him to part with two Das Boot beer steins, three out of five decanters, and ten reams of printer paper that he had been weirdly hoarding for the last four years. Maybe I don’t need Penguin Random House after all? 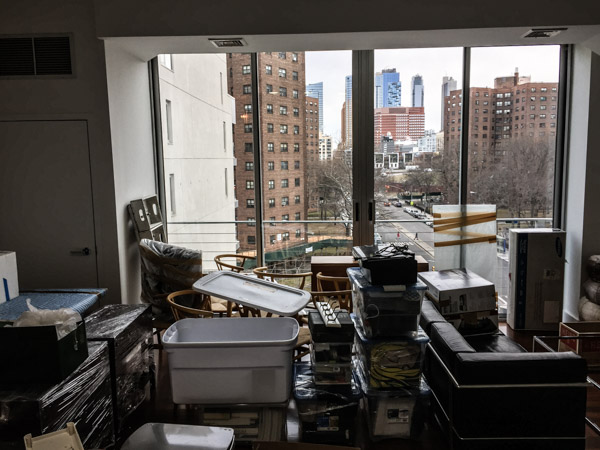 our new living room at a very scary time. and then after the ninja warrior unpack… 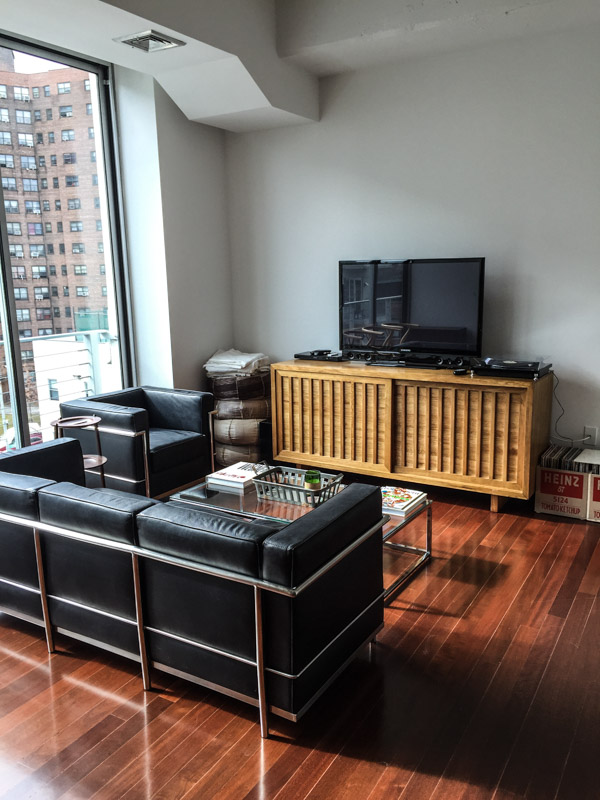 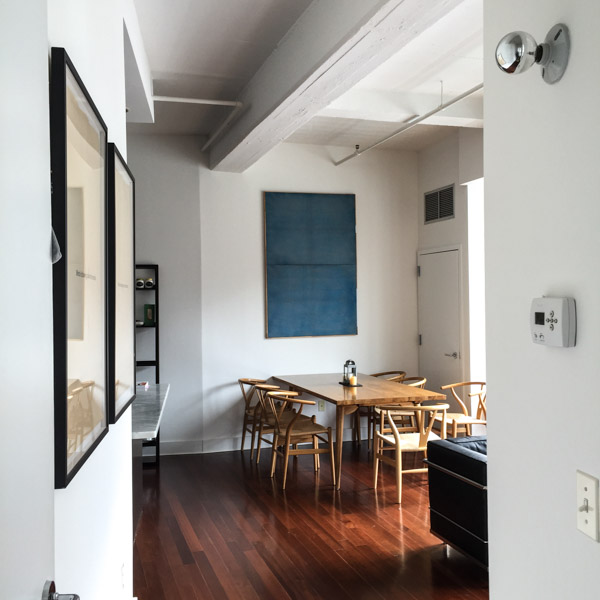 There’s so much space I keep having to pinch myself. And I keep losing things. I’m not used to putting something down and not having it within arm’s reach. It’s like having a ghost limb. Even Charlie remarked on our first night together in the new space: “it’s really weird to have you go into another room.”

Doors…I’d forgotten how magical you are. 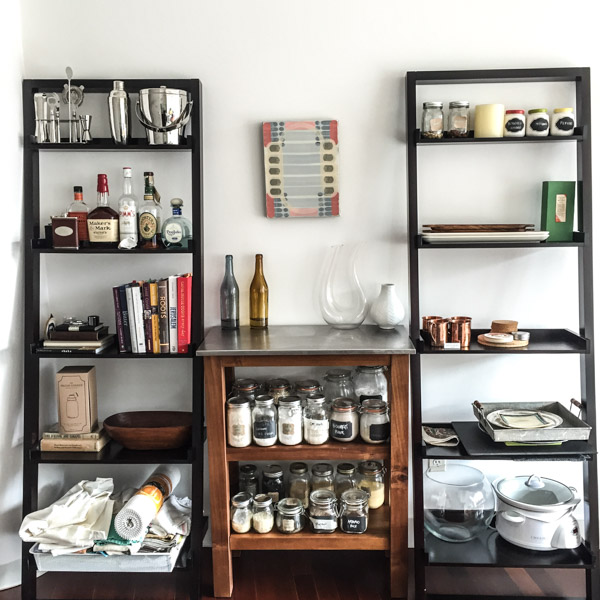 Once the apartment comes together a little more, I’m going to head to California for a chunk of March/April. I have a press trip in Napa and am going to use the plane ticket as an opportunity to slowly chip away at my west coast wanderlust. I also really want to connect with more bloggers. Our Friends in Food dinners in NYC have me craving more quality time with my wellness people.

If any of you will be out in LA for Expo West or IACP, let me know! Conferences scare me, but I would love to dine with you. 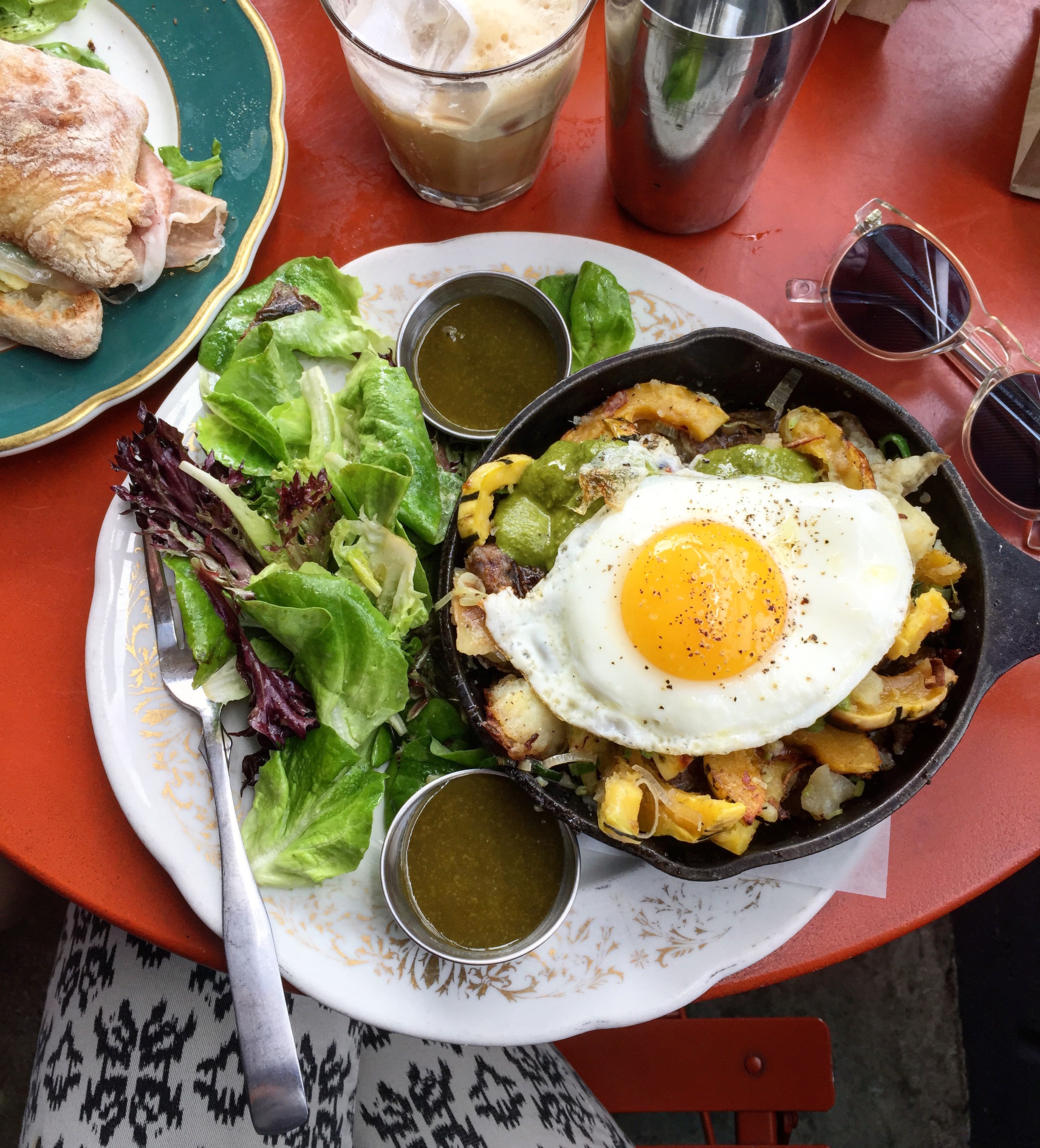 our breakfast at Sqirl on a recent apartment scouting mission in LA. I’ll be holding office hours back there in a pool of egg yolk…

Many of you have been asking me what my wellness situation is like now that the project is over. If you want some thoughts on the whole endeavor, I did a big recap on where I stand here. Generally, I think my days of experiments are over. They helped get me to a better place. But the goal was always to follow rules in the short term, so that by the end of the project, I would have such a good grasp on what worked and didn’t, that rules would no longer be necessary.

One of his coworkers limits alcohol by staying off the sauce the first month of every year, the first week of every month, and the first day of every week (Monday). This is definitely more rule oriented than I’m inclined to be, but given the power of my vice detox, I decided to join Charlie in solidarity to give the system a try. And since we were in Brazil the first week of January, dry February it was.

We obviously made this decision before we realized a) leap year b) Super Bowl c) Valentine’s Day d) moving.

Of course there’s always going to be something…but our move day was particularly brutal. We needed at least a bottle of wine a piece to take the edge off and make unpacking that much less stressful. We made it through the experience. But not without a good dose of crabiness.

So like most resolutions, we are already rethinking the plan and forming loopholes. Perhaps our week out of every month will only be weeknights… I’ll keep you posted. Either way, there’s a very nice bottle of wine with our name on it for Sunday to toast our new nest, celebrate the temporary end of our sobriety, and guzzle while the glamor girls walk the red carpet. 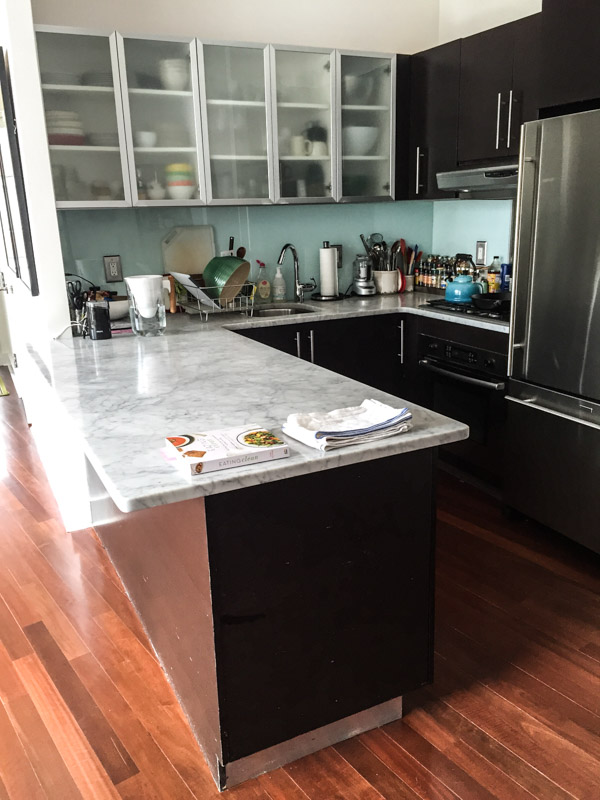 I’ve been teaching private cooking classes in New York for the last four years and it’s been one of the most enjoyable, rewarding prongs of the Feed Me Phoebe umbrella. I love hearing from you in the comments section about how a certain recipe came out. But it’s so different to actually go into your homes and seeing how you really cook.

Getting that kind of first hand market research has been hugely beneficial. Without it I’d just be creating recipes in a vacuum!

So for a long time I’ve been wanting to figure out how to teach on a bigger scale, which in New York, is not easy. Last fall, I introduced my Mind Body Green e-course. If you don’t live in New York, definitely check it out. But now that I have my very own beautiful kitchen, I want to have you over for some healthy food and fun! And by fun, I obviously mean wine.

In April, I’m going to launch open group cooking classes out of my DUMBO loft. It will certainly be an experiment at the beginning, so I’ll be relying on word of mouth while I work out the kinks. But you, my virtual friends, are the first ones I’d love to have over to learn a thing or two. You can see the schedule here (healthy Cinco de Mayo, anyone?!). Everything is priced slightly lower than usual for now, and certainly lower than most of the professional cooking schools I teach at.

If you’re looking for a group activity for an upcoming bachelorette or birthday party, we can also talk about doing a private class in my home. Just email me to discuss!

That’s about all the updates and confessions I have for the time being. If you have some of your own (things you’d like to see more of on the site and beyond), please leave me some crumbs in the comments section! And see you in Cali or BK soon?