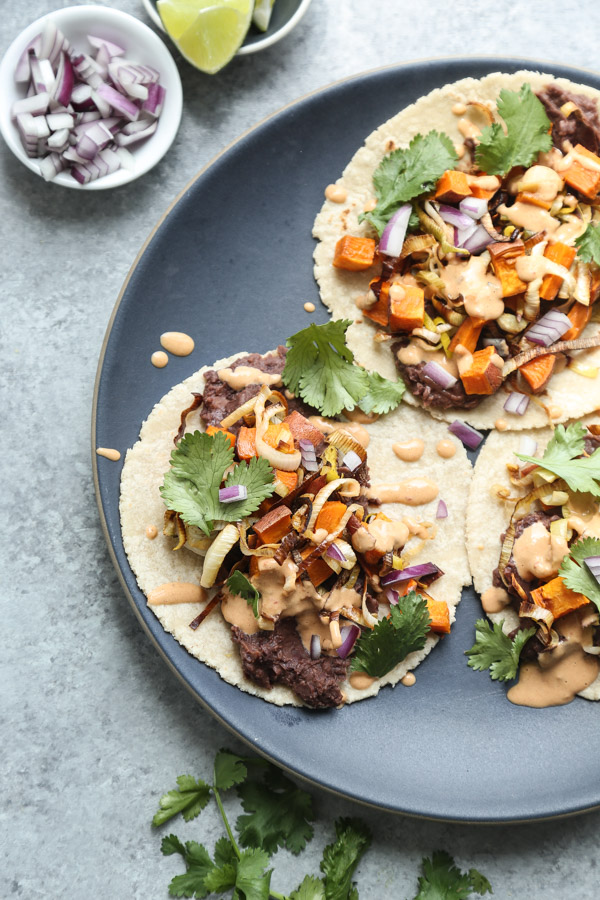 I often talk about my crazy travel tendencies on this site.

Mainly, the one in which I pack a full loaf of gluten-free bread and aggressively allergy-shame [insert name of airport fast food chain] managers until they agree to toast it for me.

I’m usually a very nice, polite person. At least, for someone who was raised in New York. But the second I enter an airport, my strings get pulled tighter and higher. My usually low threshold for patience gets tried further by every line and delay. And these things are exacerbated twofold if I arrive hungry or have my pre-planned sources of sustenance threatened.

Let’s just say that TSA and I have had some words over their definition of “liquid.” 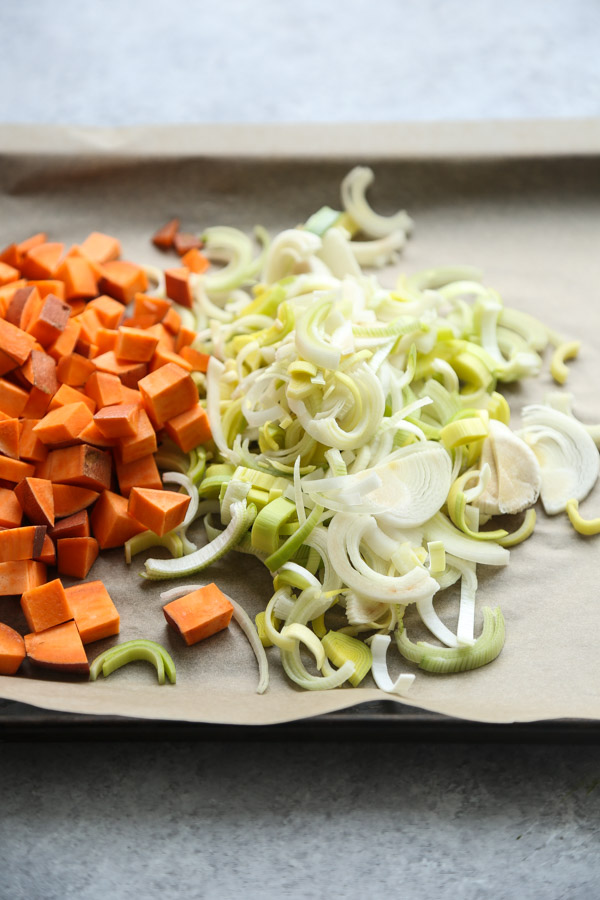 I’ve teetered at the edge of a meltdown as I watched Mr. Conveyer Belt Security Man trash a perfectly good container of hummus, turkey chili, and salsa (which maybe was pushing it). But it still had me irate. Take my aerosol bug spray, but not my lunch!!

These days, I try to play it as safe as I can with the contents of my plane Tupperware. And I still pack a few slices of bread for good measure. If I don’t, it means things could get ugly. Like, I could scare my seatmate by crying through 90 percent of Bridget Jones’ Baby. Which is neither sad, nor that funny.

My usual seatmate, on the other hand, who travels constantly for work, seems to go on a hunger strike the second he steps in line at security. Or, I should say, he refuses to eat a real meal.

When Charlie and I travel together, he’ll load up on snacks at the airport kiosk—chips, jerky, Kind bars, etc.—but even if there’s ample time, rarely will he agree to get something to-go for the plane. (Unless it’s Shake Shack in JFK Terminal 4…he is human, after all.)

Because I am a pushy significant other who experiences mild anxiety thinking about all the unhealthy habits of her life-mate, I’ve taken to packing meals for Charlie before his work trips, and then subtly persuading him to actually bring them. I believe the note on the door this past week read: “Your plane lunch is in the fridge. Don’t forget it BITCH.” 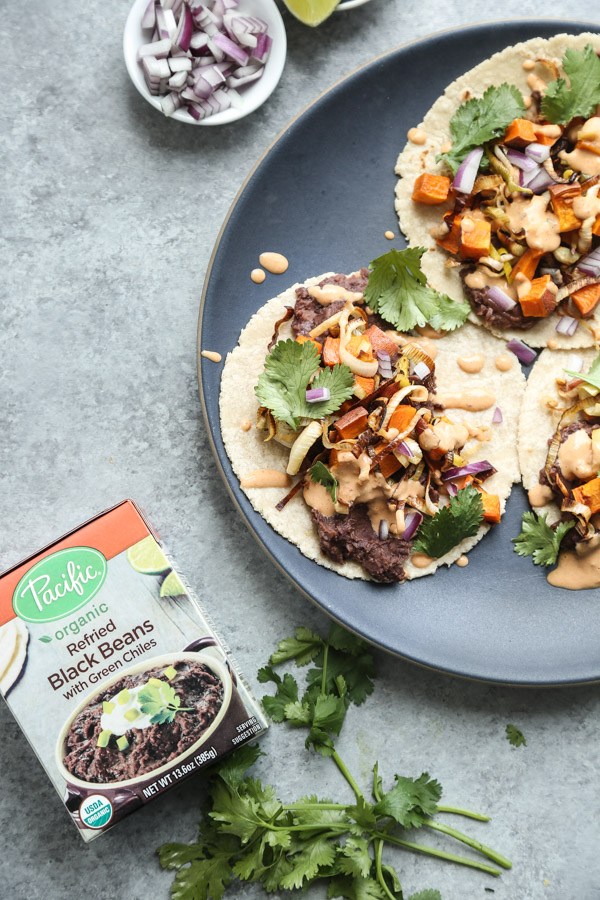 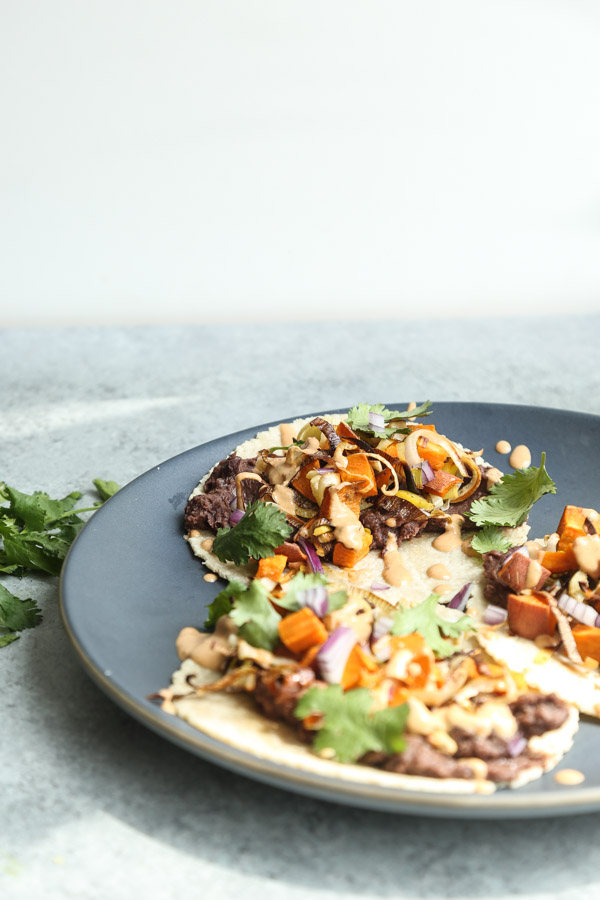 He’s always happy he has it though. Just as he’s always happy to eat half of my gluten-free Quiznos sandwich, even if he’s too embarrassed to be by my side while ordering it.

This week’s plane lunch was a particularly happy affair since it contained three vegetarian black bean tacos with sweet potato-leek hash and chipotle tahini sauce. Despite two of those elements being questionably liquid (at least, accordingly to my prior TSA tussles), they made it on the plane. No tears were shed. No Bridget Jones’ Baby was watched. And he landed in San Francisco ready to call an Uber and take on the day.

These black bean tacos are, of course, equally delicious and satisfying even when you’re not 10,000 feet in the air. They’re also incredibly easy to whip together, which is essential if you’re trying to get yourself organized and fed before a big trip, or are, say, launching a book in a few weeks and barely have time to wash your hair. 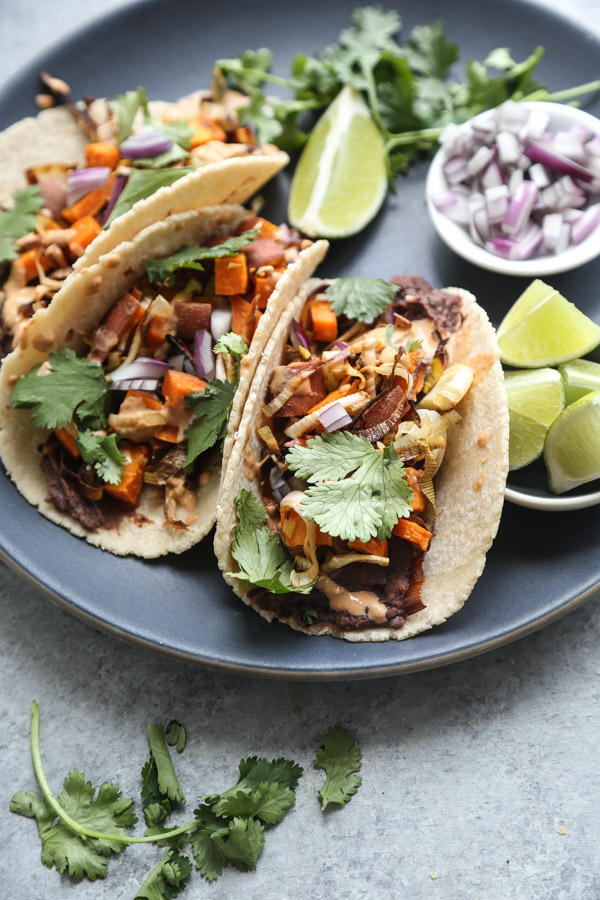 I’ve been taking all the shortcuts I can get in the kitchen lately, and a lot of them are courtesy of Pacific Foods, whose organic soups, broths and sides, I’ve been using for semi-homemade meals since my college days. (Just call me Sandra-P!)

The organic refried black beans with green chiles in these tacos are all their doing. They come ready to eat in a carton (not a BPA can!), and are spiced and brightened to perfection with lime juice.

The other two elements require only slightly more work. The sweet potato-leek hash comes together quickly and painlessly in the oven, where the potatoes get sweet and soft, while the leeks become papery and crisp—all you need for a little texture and crunch in the taco.

Finally, the piece de resistance, is a creamy tahini sauce kicked up with a chipotle pepper. It’s strange to me that there’s not more love for Mediterranean-Mexican fusion. The cumin and cilantro is a great unifier. With the refried beans, it tastes like Mexi hummus.

If you’re looking for a vegan, planty option for cinco de mayo, these tacos are your ticket! Or if you just want to use them to taunt TSA into messing with you, that works also.

From one healthy, airport maniac, to another, 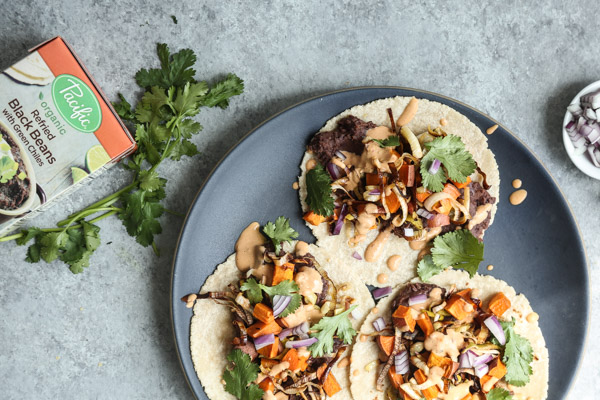 To remove grit from the leeks, halve them lengthwise and rinse them under cold water, fanning out the layers. The proceed and thinly sliced into half-moons.

If you make this, tag @phoebelapine and #feedmephoebe - I'd love to see it!
437 shares