It took until my late twenties for the lines between regular restaurants and “parent restaurants” to be successfully erased. 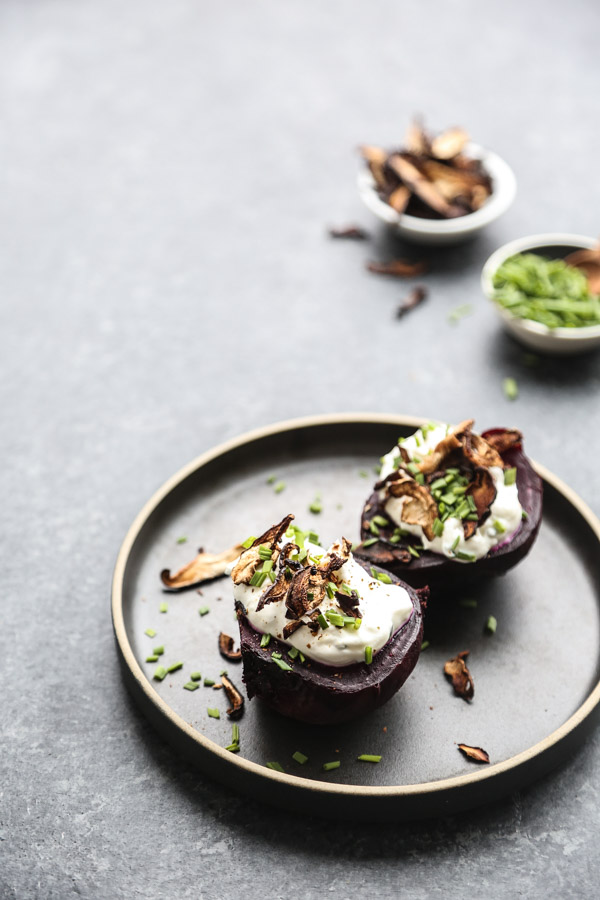 Back in college, parent visits were a highly-anticipated affair. For most homesick freshmen, this was because it meant quality time with your family, or the opportunity to see who molded your roommate’s personality and might be responsible for them having never learned to do their own laundry. For me, though, it was mostly about the meals.

Even my junior and senior years, when most of us were living off campus and had exited the university meal plan, parent-sponsored dinners at parent-caliber restaurants were something to look forward to. They were a respite from the Au Bon Pan bread bowls, giant underpriced falafel wraps, and gastropub burgers that made up the majority of our diets. And they were a chance to taste some of the real gastronomy happening outside the 2 for 1 Tuesday sandwich bubble of college hill. 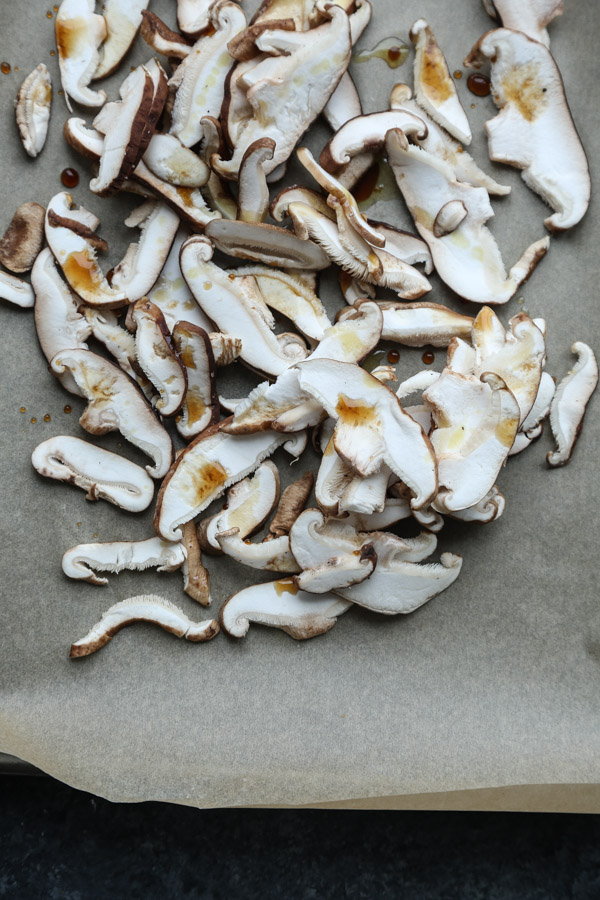 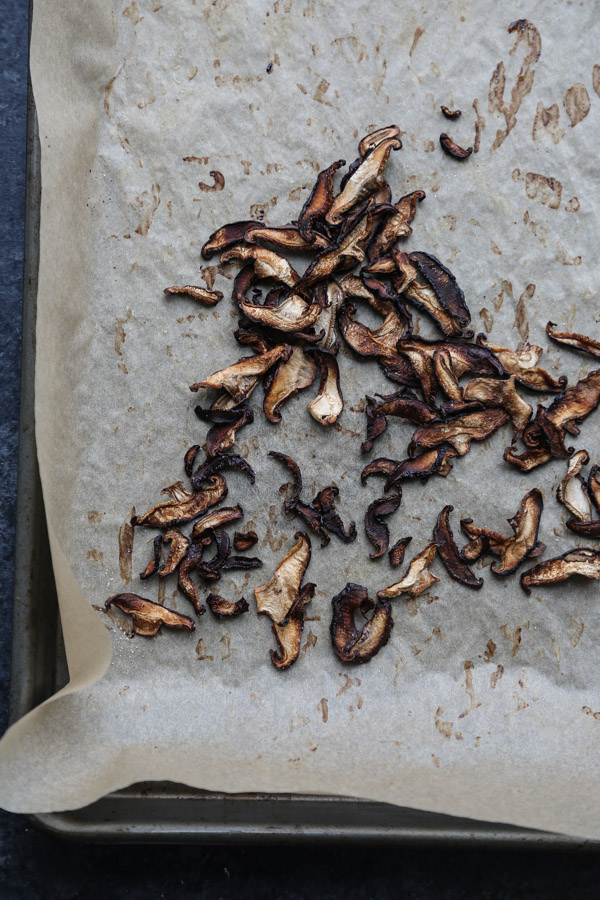 Parent restaurants were classified as such because of their notoriety in the city at large. Their appetizers usually involved a raw bar, and their mains often included a market-priced sea creature or aged slab of meat. And we often ordered the latter in hopes that there would be some leftovers to take home and ravage a few hours later, in place of the traditional fourth meal of the day, pizza.

Parent dinners were also exclusive affairs. There were usually just a few extra spots at the table, depending on the parent in charge. Those spots went to housemates, significant others, and other VIP’s. I’d like to think that I often got selected as part of the latter wild card group because of my charm and ability to butter up an adult just as deftly as an artisanal sourdough dinner roll. But even back then, I think it was clear how much I loved the world of haute cuisine, and I got a lot of porterhouse steak bones thrown my way as a result.

During my first year out of college, restaurant meals became a staple of our baby adult social life. We took advantage of Restaurant Week, which meant a 3-course meal at a parent-worthy restaurant, at a fraction of the usual parent tab. And the rest of the time, we ticked off obscure ethnic eateries from Grub Street’s Cheap Eats list and took advantage of any new openings that had yet to procure a liquor license and were BYOB. 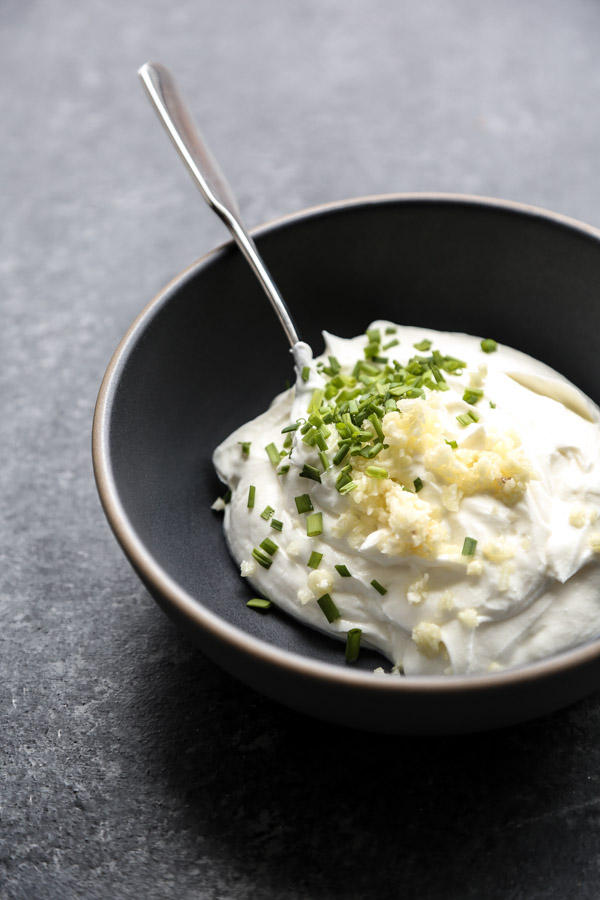 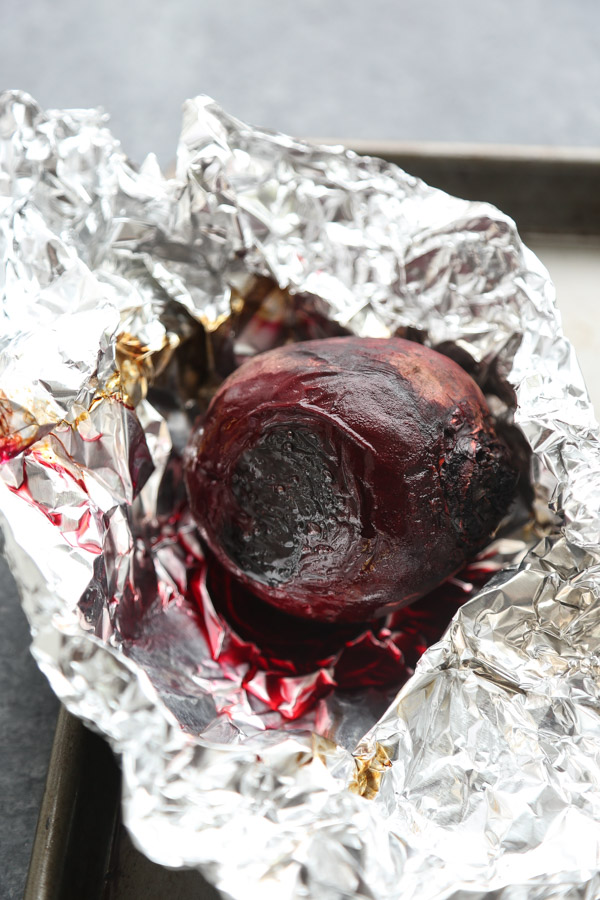 As my culinary expansion accelerated, I experienced a strange trade-off in my social life.

There were only so many venues in New York City where a 10 to 15 person reservation was tolerated. Whereas inclusiveness at non-parent meals was prized in college, having a friend invite 3 extra people to dinner out at a restaurant in the city, after you had already called 3 times to expand the reservation, was enough to make you want to strangle them with a 3-ply napkin.

This was ultimately one of the big factors that led me to the kitchen. When I cooked, adding three extra people at the last minute was just a matter of popping out to buy another pack of 3-ply napkins at the local bodega, and mixing an extra can or two of black beans into the chili.

My fourth-floor walk-up near Union Square became the destination for large group gatherings around the coffee table, where our college party ways could be recreated with the addition of stock pots and ladles. 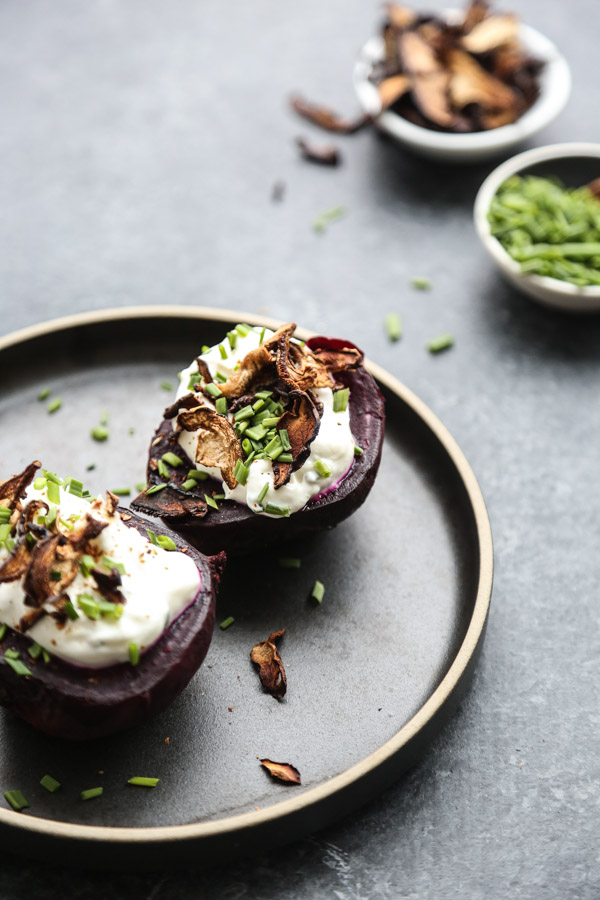 And yet, I also had the advantage of parents who lived just 40 blocks north. So if I wanted to embrace exclusivity again, in the name of $35 dollar fish courses, I could still occasionally do so in their company, on their dime.

The ultimate post-college parent restaurant was Union Square Cafe. It was just a stone’s throw from my apartment, and seemed to embody in restaurant (and burger) form all the effortless elegance, earned wisdom, and casual refinement that I aspired to acquire during my next decade of adulting. The crowned jewel in restauranteur Danny Meyer’s family of parent-worthy restaurants, it’s only gained more of a mythical status thanks to one of my favorite novels of last year, Sweetbitter, which is loosely based on the author’s experience as a back waiter there in her early twenties.

After a lease battle that is as classic New York as the institution itself, Union Square Cafe moved from its original location on 16th street to a new space just Northeast of the square. It reopened earlier this year with a new menu, design, and lease on life. 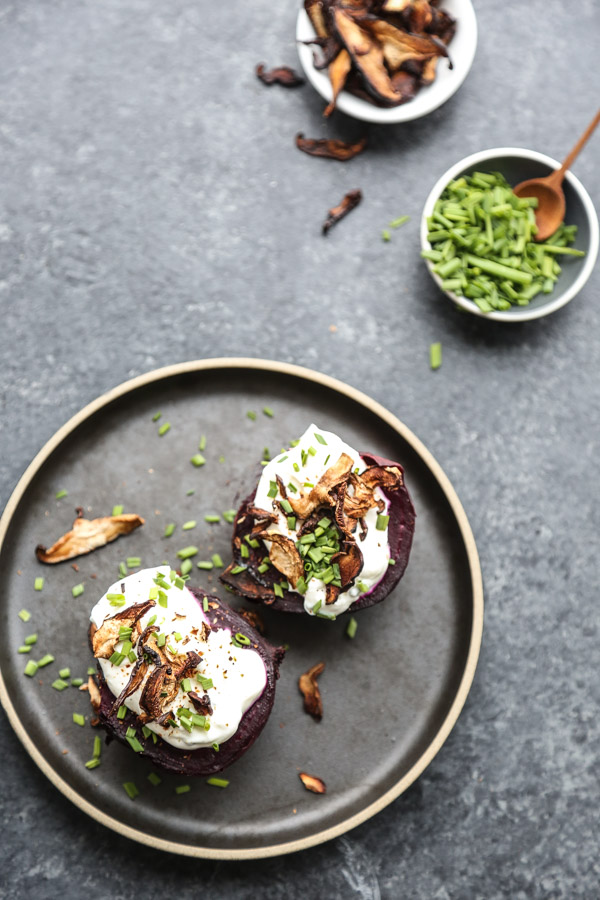 Thanks to my career, I’ve graduated to a place where Charlie and I can treat ourselves at parent restaurants. But it’s still a treat to do so with my actual parents, now more for the company than the ability to enjoy a $30 entree without having to resort to half priced sandwiches the rest of the week to afford it. So when my dad told me he wanted to celebrate his birthday at the new Union Square Cafe earlier this year, it was a double win.

I could go on and on about the meal, but one of the most creative and notable things I enjoyed was a side dish: the baked potato beets, which came roasted to perfection in their blistered skins, and topped with the usual fixings.

Roasting beets is one of the easiest way to get rid of the skins—they slip right off. But in this version, you don’t even have to discard them. The flesh inside doesn’t get as soft and mashable as a potato, but they taste just as good with a dollop of sour cream, chives and bacon bits. Or, in my case, Greek yogurt and slow roasted shitake mushrooms. 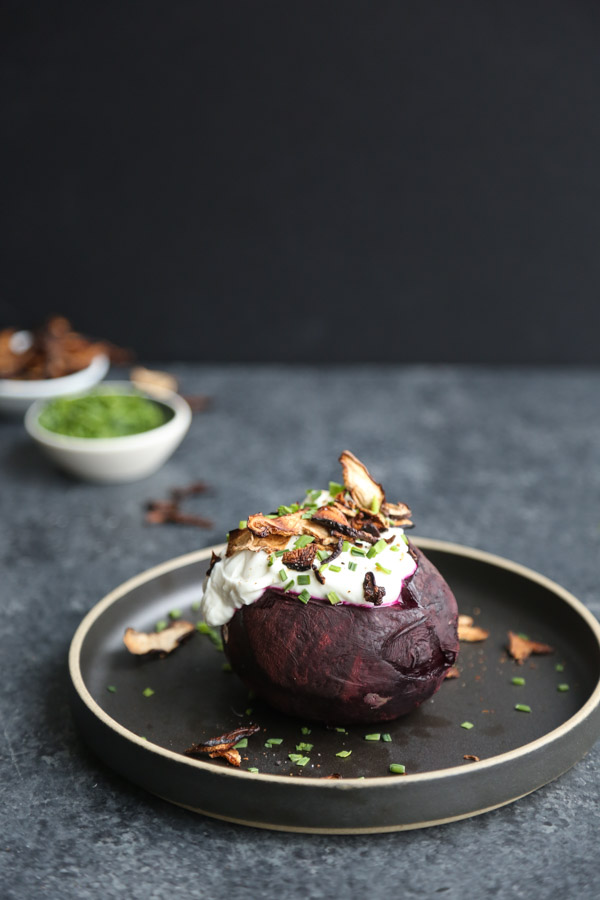 These loaded baked potato beets are a great elegant side to make for your Easter or Passover spread. Or if you’re new to adulting and don’t have parents nearby to take you to a parent-worthy restaurant, it’s a way to recreate the experience in your own home, for however many friends you choose to invite to share it.

p.s. there are only 2 spots remaining on my launch team! You guys have blown be away with your enthusiasm, and I can’t believe it filled up so quickly. If you want to claim one of the last two, just email [email protected] with a line or two about why you want to support the book, and don’t forget that you’ll get a free copy as part of this posse! 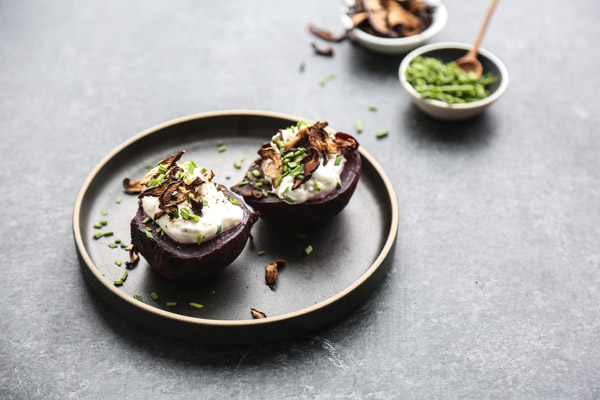 All the elements of this recipe are make-ahead and can be done separately over the course of a few days, which may be helpful if you're including them on a holiday menu. The beets can be roasted at a higher temperature - 375 degrees F, for 1 1/2 hours - the whole time to degrees the cook time if you aren't putting them in the oven at the same time as the shitakes.

If you make this, tag @phoebelapine and #feedmephoebe - I'd love to see it!
409 shares