While I don’t usually hop aboard trends, I seem to have fallen into the same deep pit of quarantine chocolate chip banana bread as the rest of the internet. 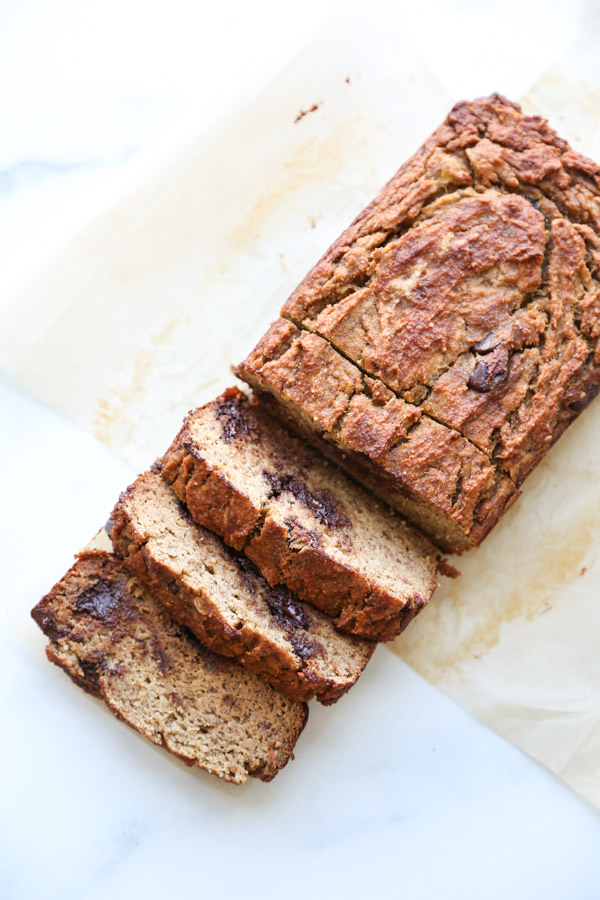 Like apparently everyone else you know, every two weeks I buy a bunch of bananas thinking I will use them in smoothies or eat them with peanut butter as a snack. But it’s been too cold for the former, and well, once the bananas ease past their perfect yellow ripeness, I have little interest in them. Consider it part of my unique and complex fruit phobia.

So it seems at this point that I am buying a bunch of bananas specifically for the promise of banana bread once they’ve turned into black mutants that can barely hold their shape. Having this bread to look forward to at the end of my grocery haul, when everything else desirable has been gobbled up by my insatiable (but cute) dumpster of a husband, has been one small highlight of quarantine life. 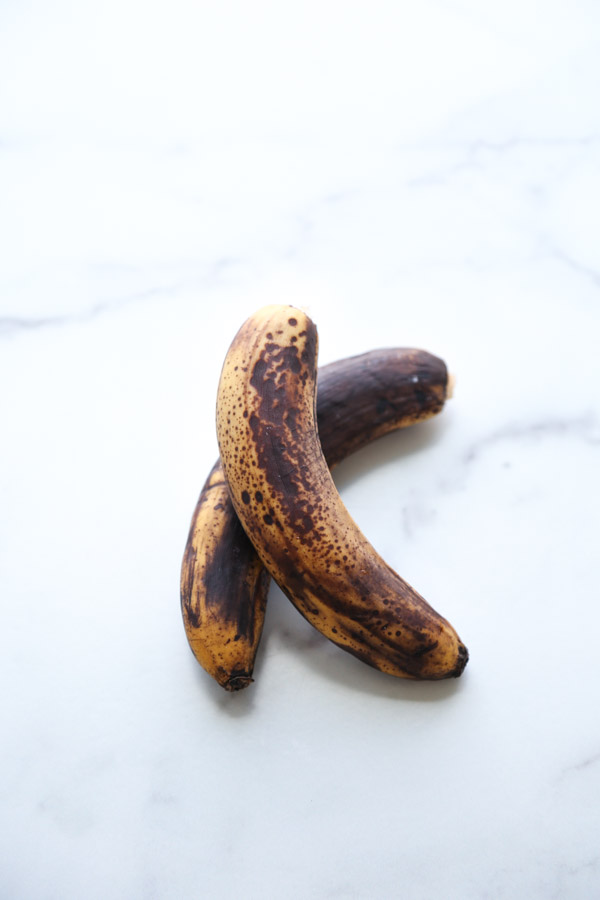 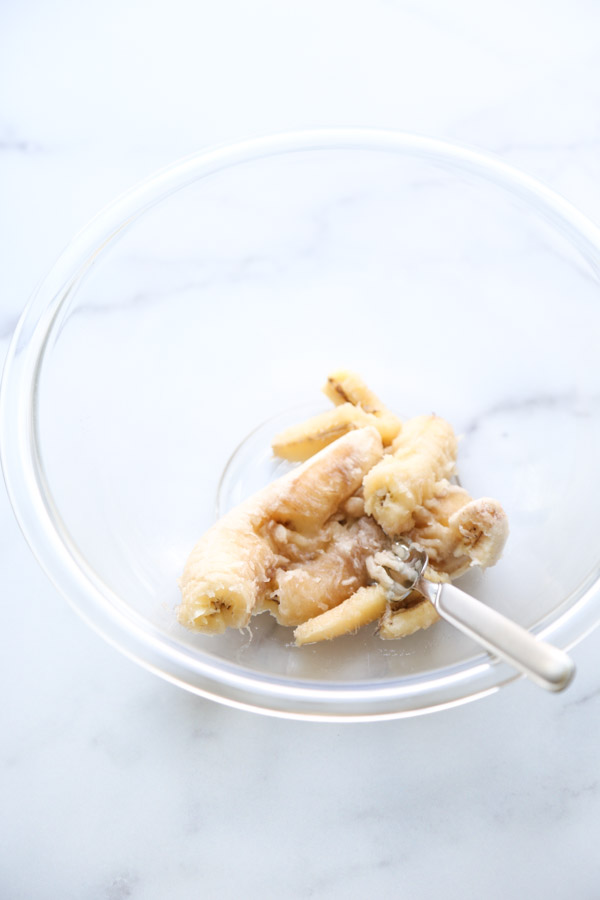 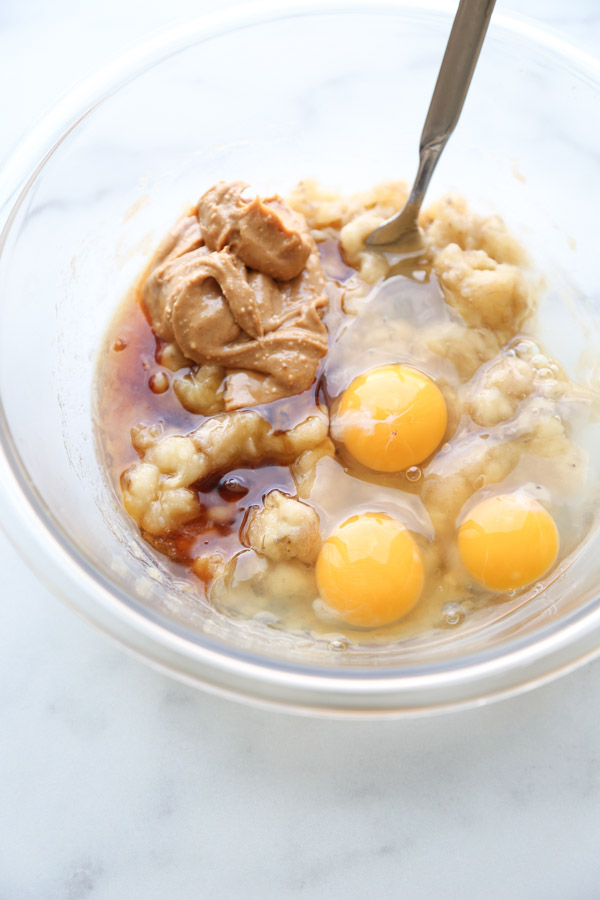 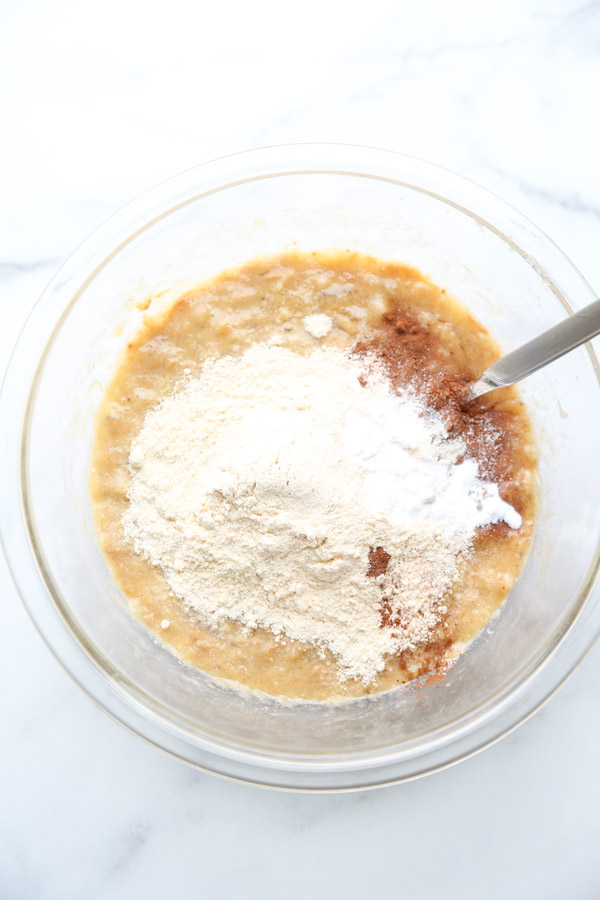 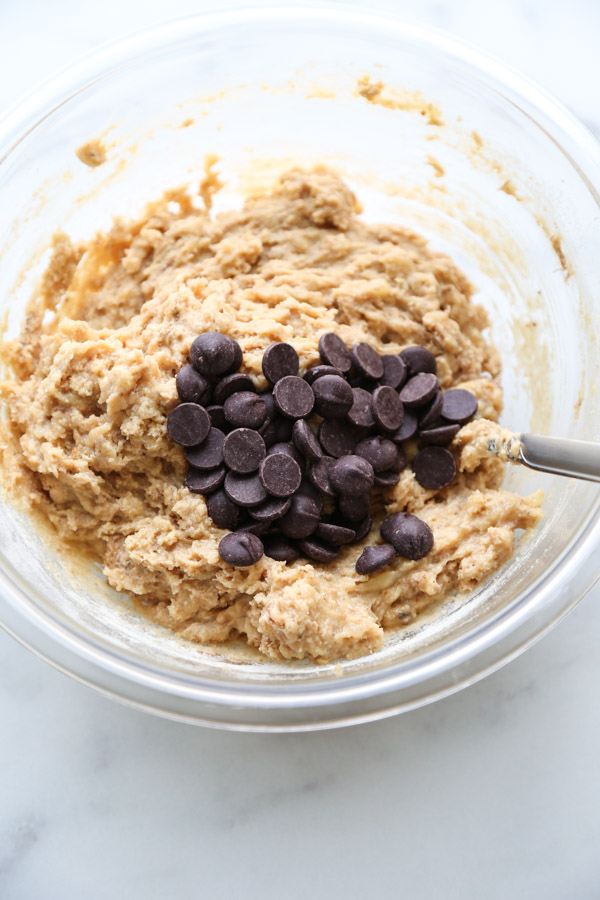 Only, as mentioned, at the end of that two week haul, so little remains.

I introduced you to Desperation Soup on page of The Wellness Project Book. It’s a concept that originated with my uncle Denny, who is a chronic farmer’s market optimist (i.e. over-buyer) and thus always has a bowl of rotting this or that on his countertop by the end of the week. He cleans out the crisper drawer and veggie bowls by making soup. 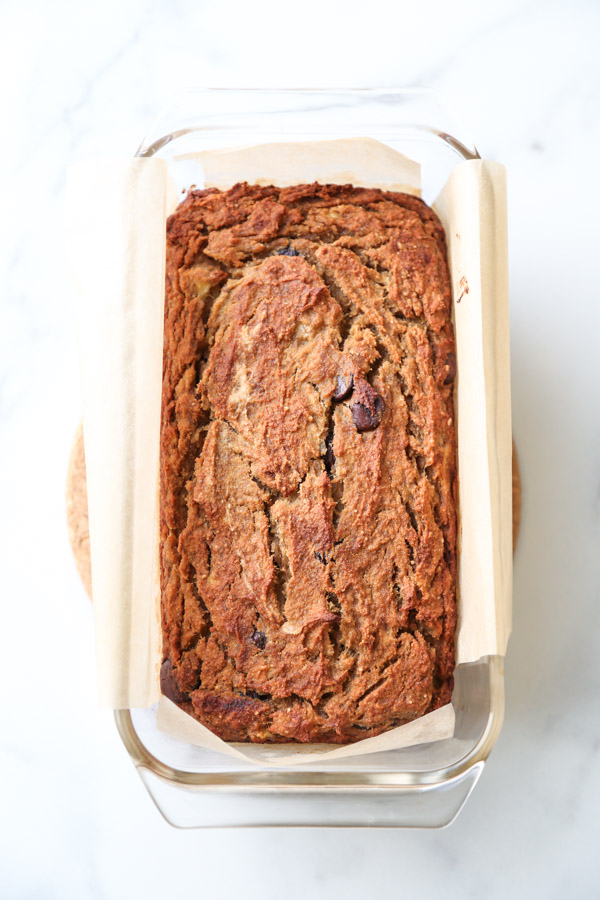 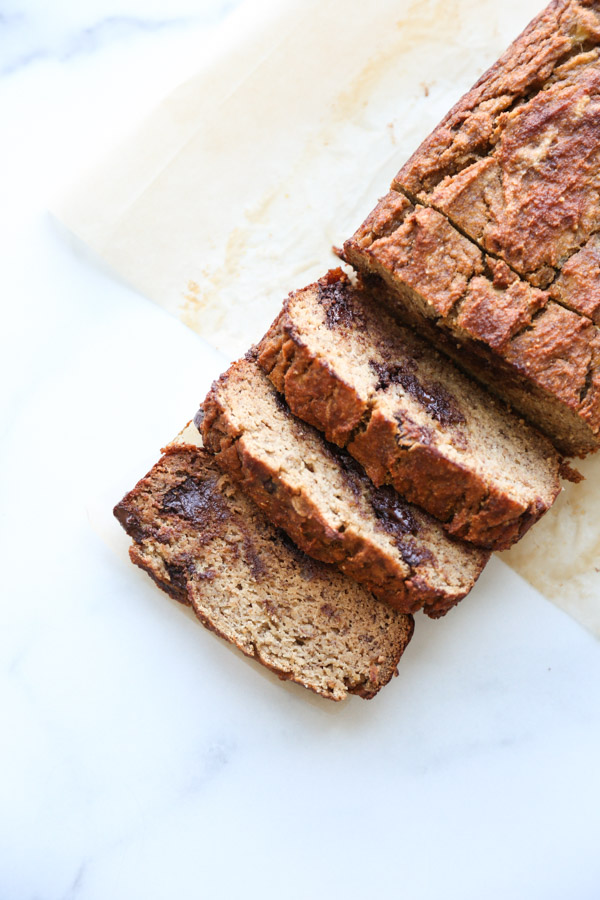 Though I wouldn’t recommend throwing your slightly moldy head of cabbage into this banana bread, it can serve a similar function for baking supplies. The recipe is a blank canvas for using up whatever you have on hand. If you don’t have maple syrup, use honey. No gluten-free rice four? Use oat or almond. Ate the last of your peanut butter on some perfectly ripe bananas? Use almond or cashew. As you can see, the possibilities are endless.

When I first got to Martha’s Vineyard, I was reduced to the meager baking supplies leftover from past summers. There was coconut flour, baking soda (not powder), and no sugar of any kind. Afraid of tweaking my go-to gluten-free banana bread recipe with a paleo flour, I decided to go rogue and use gluten-free pancake mix! After that experiment I was convinced that you can’t mess this banana bread up. 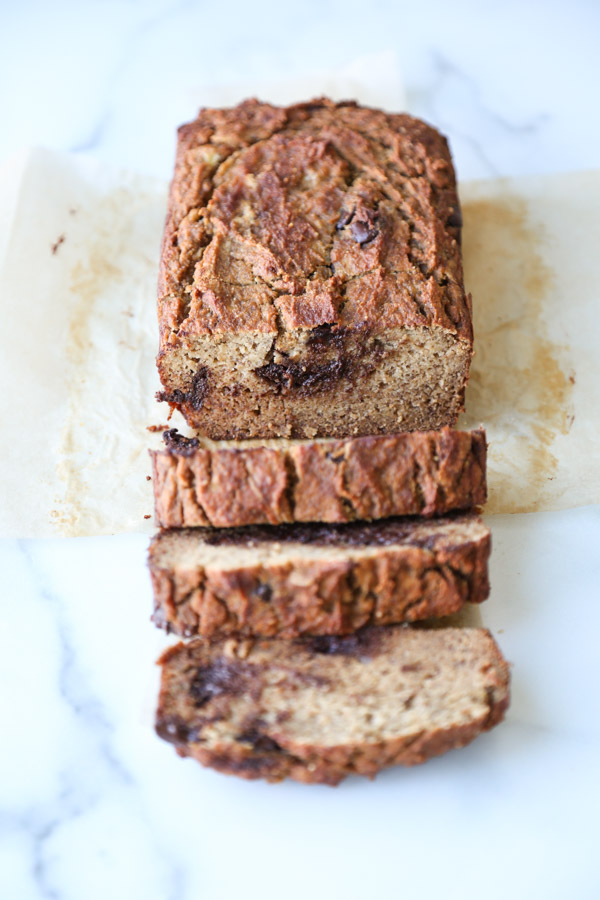 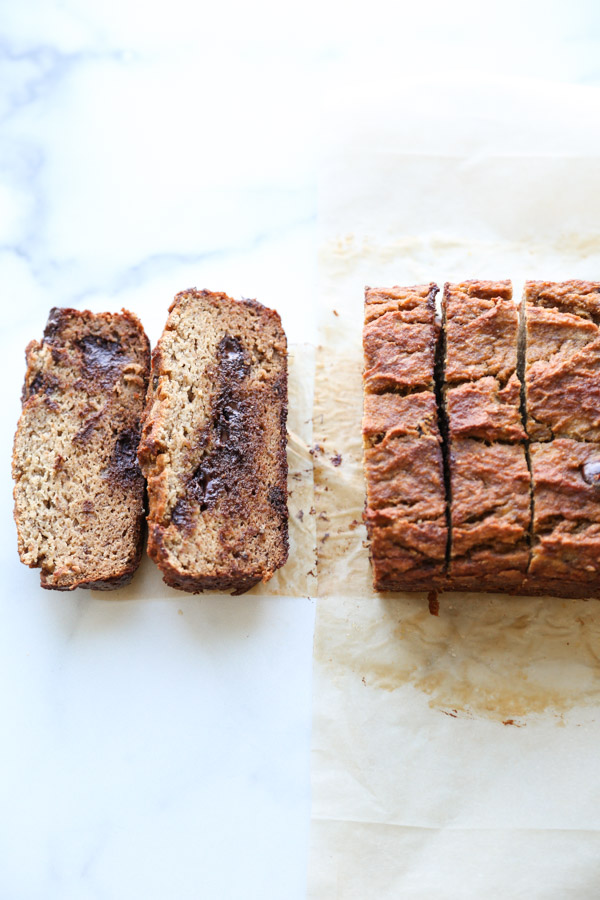 The following recipe can easily be paleo as it uses coconut flour, but can be subbed for any other gluten-free four. The only thing to note is that unlike some flours, this one can’t be swapped 1:1. With coconut flour, a little goes a long way, and usually is a 1:2 sub for other GF varieties.

Since these past few months have revealed desperation of all kinds, I hope this bread can make your quarantine routine a little sweeter. Read on for my gluten-free chocolate chip banana bread recipe!

With heath and hedonism, 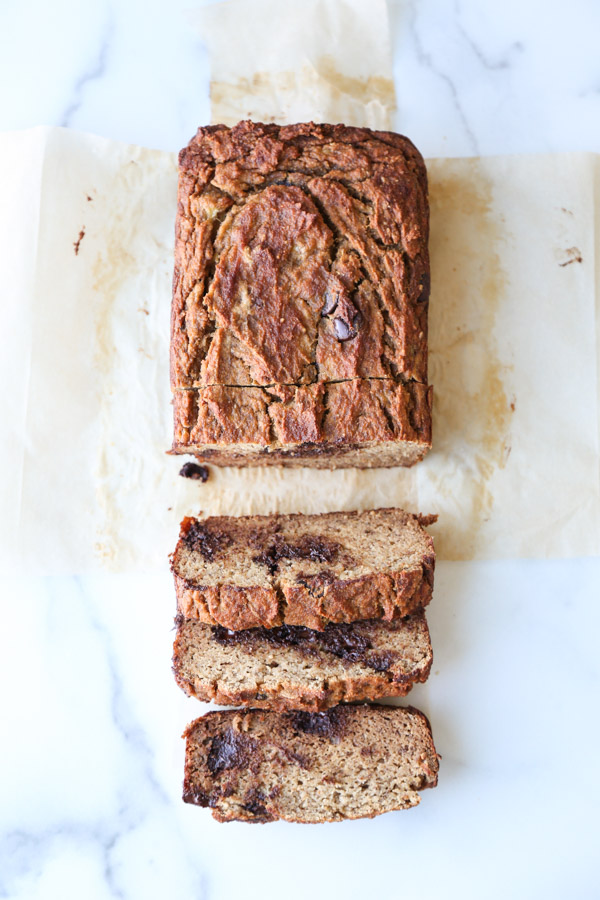 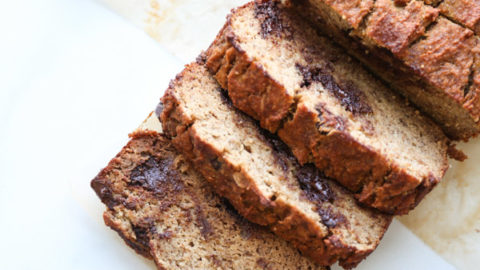 5 from 2 votes
print recipe
This gluten-free chocolate chip banana bread recipe gets its name because it is infinitely variable to meet the needs of your dwindling pantry. You can use it as a jumping off point then sub any gluten-free or paleo flour you have on hand. Most gluten-free flours can be subbed for the coconut flour at a 2:1 ratio. Meaning, 1 cup GF flour in place of ½ cup coconut flour. I’ve used white rice, AP GF flour, almond and oat flour in this recipe. All work great.
Prep Time 10 minutes
Cook Time 45 minutes
Servings 1 loaf
Author Phoebe Lapine

If you make this, tag @phoebelapine and #feedmephoebe - I'd love to see it!
205 shares