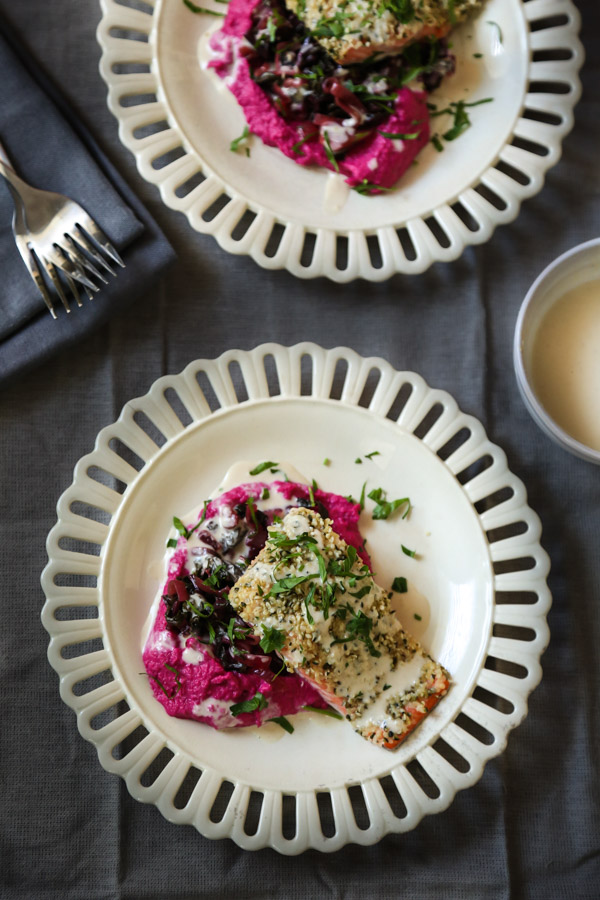 One of the most enjoyable memories I have from writing my first cookbook was the research that went into the “Dating and Food” section. I interviewed a bunch of my guy friends to find out what they’d cooked for their dates in the past, and, if nothing, what they might cook for them in the future as a Utopian romantic meal. Their responses? Seared tuna, crusted salmon, and salads. Basically, your stereotypical white girl food.

At the time, I was an omnivore. So my love of carbs and bacon, coupled with the feminist instincts of a self-righteous twenty-three-year-old, left me with only one conclusion: men are idiots. 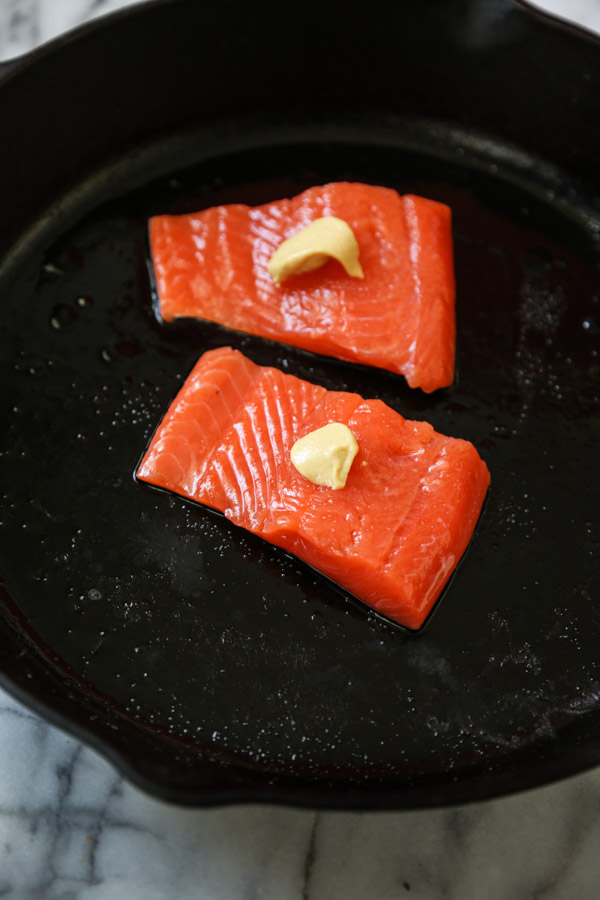 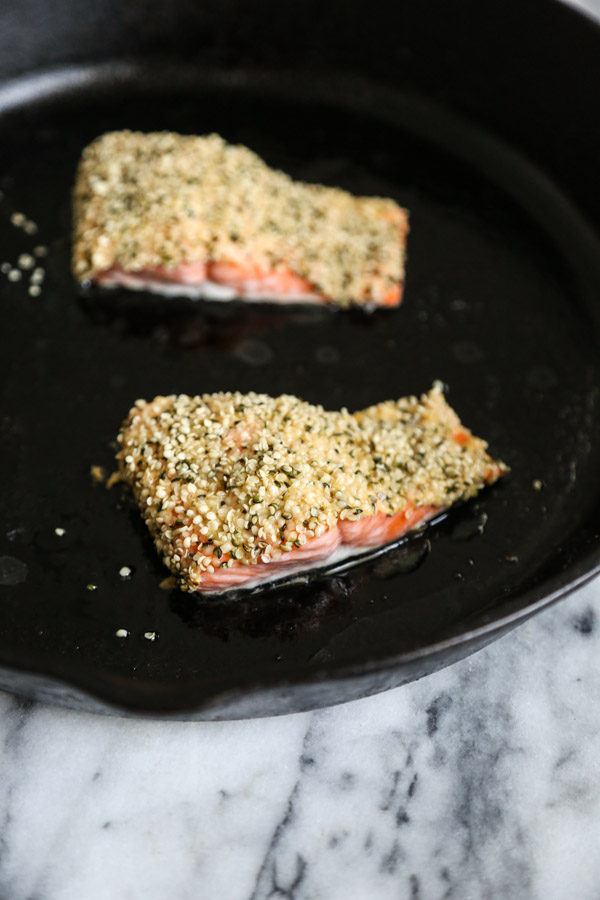 The guys in question were given a little tough love and sent on their way with a recipe for creamy risotto and a few tips on modern day chivalry. (I’m still waiting for my thank you notes, sigh…).

But five years and several food intolerances later, I realize that my own biases might have been misguided. Because today, my idea of a Utopian romantic at-home meal is basically this hemp crusted salmon with beet hummus and greens.

Before I got my diet under control (and by extension, my autoimmune disease), I would have argued that women want to be wooed with the same over-the-top steakhouse meal that Texas business men eat year round. Holidays are when we typically throw our food rules out the window anyway. And what better way to indulge than a plate of rare steak, crispy potatoes, and chocolate lava cake? 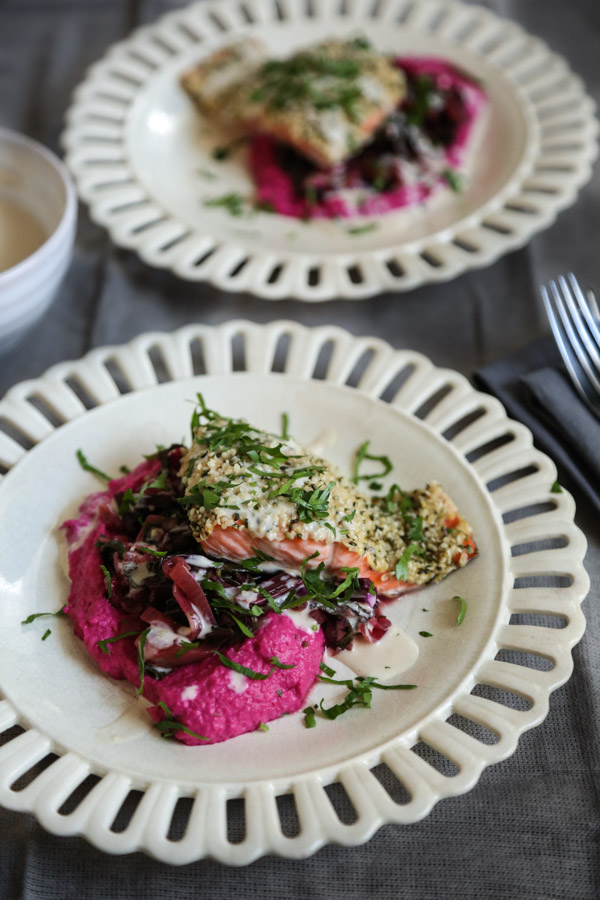 A few Valentine’s Days ago, I experienced the epitome of this meal. My boyfriend at the time had taken me to Peter Luger—the iconic New York steakhouse—for all the romantic fixings. What was not romantic, however, was how we felt afterwards. Even though only one of us had undiagnosed food issues, we both ended up curled up in the fetal position two hours later. And the only heavy petting being done that night was to our bloated bellies.

Perhaps it’s because I learned my lesson the hard way, but today my ideal Valentine’s Day menu contains all of the healthy comfort foods I usually eat. Ah, maturity! So much less fun, so many fewer stomachaches. 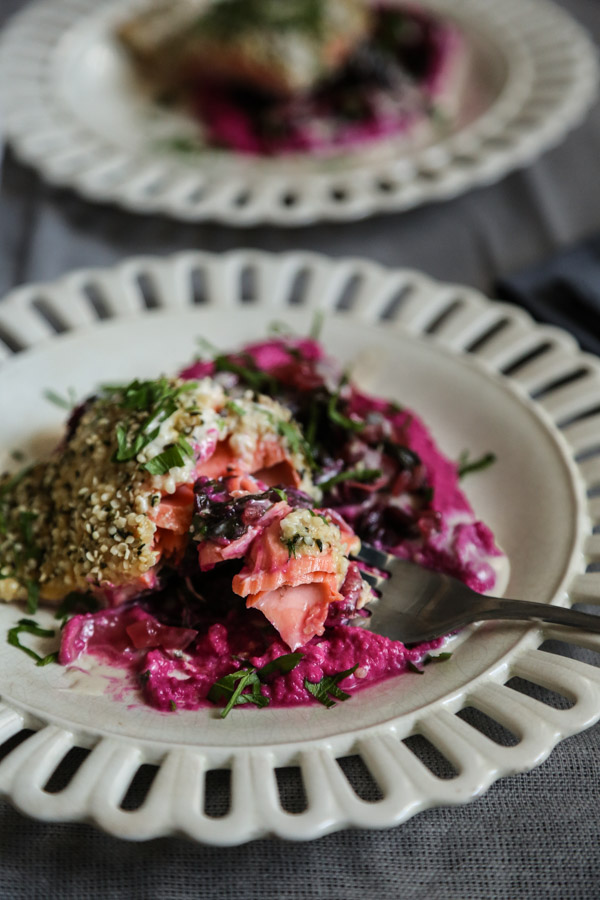 If you’re into embracing a few girly stereotypes this year, I encourage you to point your clueless men towards this hemp crusted salmon recipe. Not only is it allergy and gluten-free friendly, it gives you not just one, but TWO pops of pink on the plate. And it will make you feel a lot more energized and frisky later on in the night than the equivalent color scheme in steak juices.

The recipe steps below might look a little overwhelming, but really it’s the same few ingredients—tahini, lemon juice, etc.—used in every component. You can make the beet hummus and tahini sauce up to a week in advance (get moving dudes!), and fire off the greens and salmon right before you’re ready to eat. The whole thing comes together in less than an hour (even less time if you’re not culinarily clueless) and makes for a beautiful composed presentation, which, stereotypes indicate, is something that the ladies tend to like.

Happy early V-Day ya’ll! I hope cupid brings you plenty of omega-3 fatty acids along with that basket of chocolates. 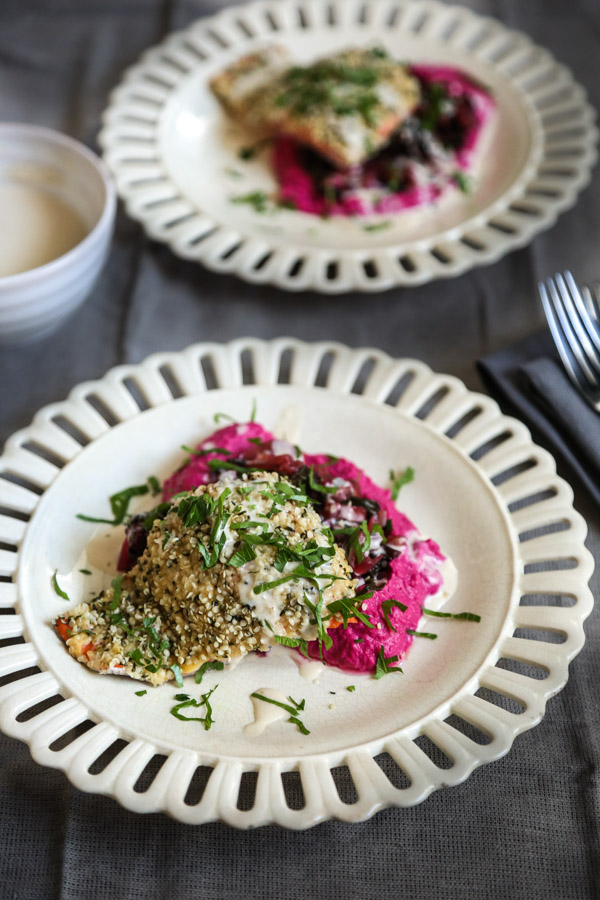 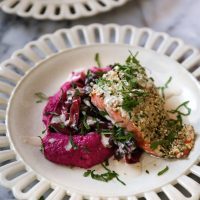 Print Recipe
This hemp crusted salmon recipe might look like it has a lot of elements and ingredients, but I promise it couldn't be easier. All the sub recipes have a similar set of ingredients and come together in no time. This is the most quick and elegant dinner party dish - perfect for impressing your people!
Prep Time 10 minutes
Cook Time 10 minutes
Total Time 20 minutes
Servings 4

If you make this, tag @phoebelapine and #feedmephoebe - I'd love to see it!
207shares