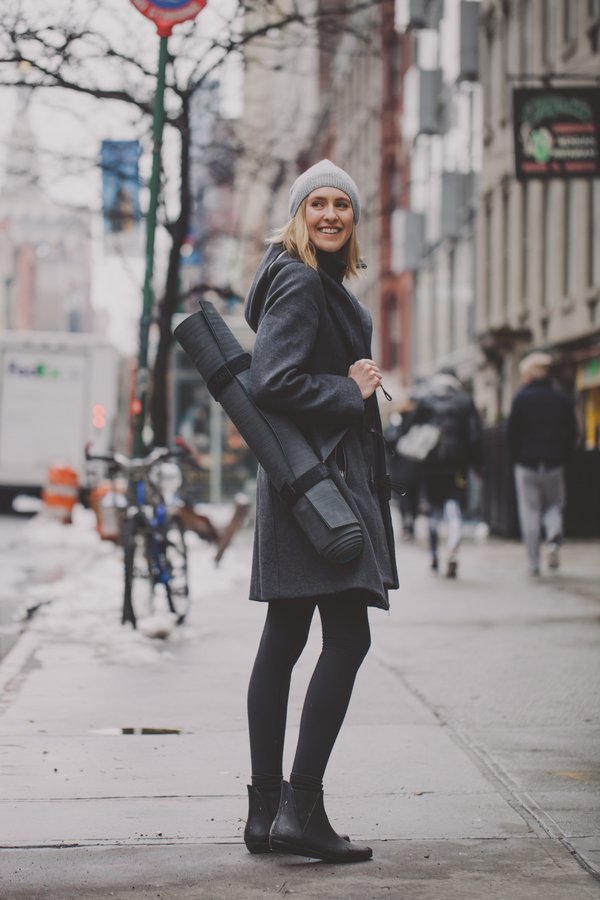 (sorry for the lack of seasonality in these photos…)

For the last 5 years, I’ve been on a pretty steady fitness downward spiral. And while in my early twenties I could go a month without exercising and then snap my droopy delts back into gear with a 4-mile run, when months turn into years, you eventually reach a point when you’ve officially “let yourself go.”

It’s not that I’m a Hannah Horvath-esque sloth by nature (though sometimes I too use my chest as a tray). The thing that kicked off the nosedive in the first place was that every time I tried to run, I would get a horrible pelvic cramp within half a block. (Spoiler alert: the culprit was a lasagna brick of gluten lodged in my intestines).

Today, I’ve corrected my stomach issues for the most part and can no longer use them as an excuse for not exercising. But I’ve replaced that physical barrier with others: adrenal fatigue and a pervasive fear of throwing out my back.

The adrenal glands are also in your endocrine chain of command. And when the thyroid is out of commission, they have to work extra hard to generate energy for your body. They’re are also responsible for regulating your stress responses, which is why adrenal fatigue for overworked New Yorkers—especially women—might be as prevalent as the common cold.

With my thyroid running on fumes for years, I had unknowingly been barreling full speed ahead on adrenaline alone. And I probably used the last of that fight or flight resource during my stint on reality TV, while trapped on a food truck with five other h-angry chefs and a lot of sharp knives.

I probably haven’t been to the gym since I returned from the show in 2012. For one thing, after going for a run, I would be hit with a massive wave of exhaustion. (My adrenals doth protest too much!) So I switched to more gentle exercise like yoga. But with my back going in and out, I even stopped doing that.

Now that I’ve gotten both of these issues partially under control, it’s time to start building up an exercise habit again. And believe it or not, I’ve been dreading this task even more than I did not drinking for 30 days.

Even without the medical excuses, getting my tukus to the gym or an exercise class is something I’ve struggle with since leaving my day job, when my schedule had more structure and the boredom necessitated some serious stair master action to maintain sanity.

This month I’m going to focus on fitting fitness into everyday life. I used to think about the benefits of exercise only in terms of losing weight and getting rid of my late night pizza-induced muffin top before spring break. But now that I’m not even doing the bare minimum, I want to investigate the short-term mental and long-term physical effects that working out has on our lives and figure out the easiest, healthiest, and most sustainable ways I can make moves without spending $300 a month on Soul Cycle and gym memberships.

Read on for more ideas on how you can add some exercise experiments to your life this month! 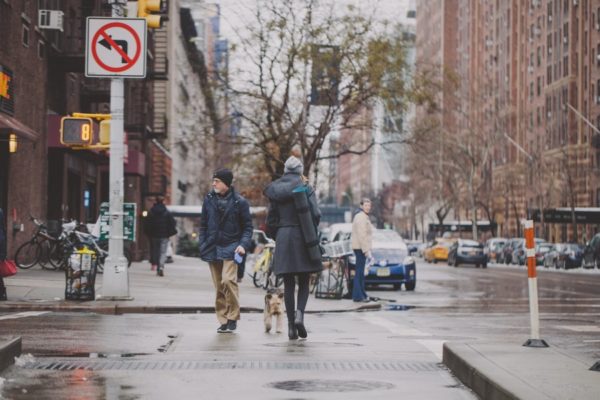 There’s no one who can really argue with exercise. Like eating your vegetables, it’s a pretty universally accepted part of a balanced, healthy life. But still, there’s a lot of debate over how much is actually necessary to get the job done. And a few recent studies (written about in this article), suggest that we non-gym rats might actually be doing better than we think.

The recommended dose was 150 minutes of physical activity a week, with 30 minutes of that being vigorous. That means that outside of that half hour go-big-or-go-home stretch, simply walking would be considered enough activity to ward off premature death.

When I was doing research for back month, one of my favorite reads was Move Your DNA, by Katie Bowman. Her philosophy is that if you are what you eat, then you’re also how you move.

“Exercise is movement, but movement is not always exercise,” she writes. “And exercise does not always make every part of us better.” Just as our diet benefits from as many different nutrients as possible, our bodies need a variety of different “loads” placed on it in order to fuel our musculoskeletal fitness, which she believes is much more important to attend to than our cardiovascular system.

“Too often we reach for a movement Snickers bar than a movement kale salad,” she says. And what’s the most nutritious movement? Walking.

When done naturally–meaning, not on a treadmill, but on a varied terrain—walking uses a greater number of muscles than most other activities, which means “taking yourself on a walk is like taking your cells out to eat.” Running on a treadmill may do something to get oxygen flowing, but it’s the same movement over and over again—it has a very limited load profile, which means not very many movement nutrients.

So to begin my foray into getting my body back in shape, I’m going to forget that gym membership and focus on moving more everyday. In New York, which is such a great walking city, this is much easier than in other places. Instead of taking the subway a few stops, I’ll leave a little earlier and walk. Instead of the elevator, I’ll take the stairs. And I’ll try to avoid cabs at all costs.

On days when I don’t have meetings out on the town, the 30 minute requirement will get me back in the habit of actually prioritizing movement, even if it’s just leaving the house to take a walk.

I’m not totally convinced that Fitness trackers are necessary. But I thought that I’d use my new Jawbone Up band to see how my 30 minutes of movement everyday actually stacks up to the recommended dose of 10,000 steps.

2. Switch up your routine.

Even though I know walking is a great way to put my best fitness foot forward, I want to find other ways of getting movement variety, even if just for my own mental stimulation and curiosity.

Instead of joining a gym, I’m going to give ClassPass a try, which allows you to go to different boutique studios around the city. I want to face my fear of organized exercise by trying out one new fitness trend a week, which may or may not include allowing my friend Sarah to take my Soul Cycle virginity. We’ll see if the fun and community factors make up for the cost.

Just in case they don’t, I’m also going to try out a few fitness apps to see if I can get in the habit of squeezing in some pilates and other movement exercises in between writing sessions at home. 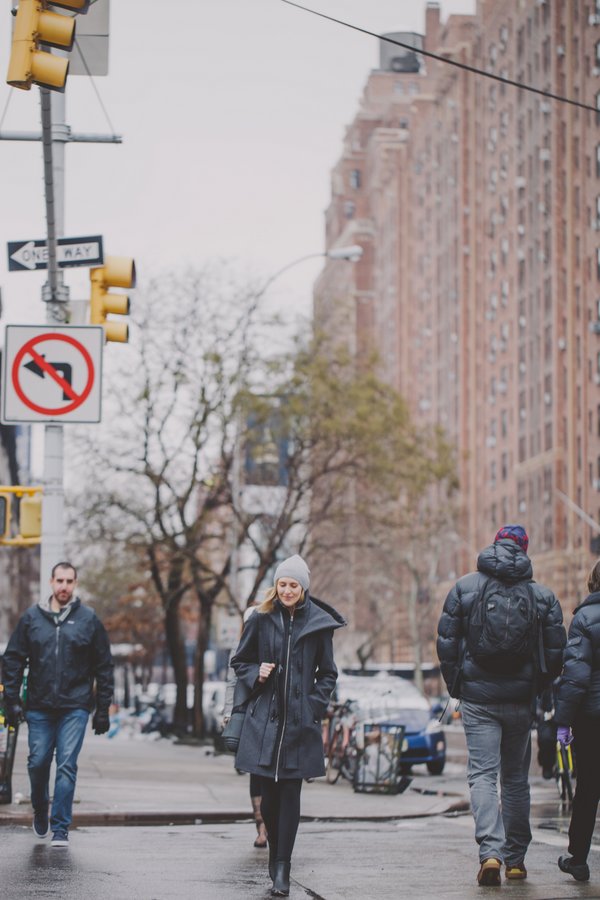 The exercise habits of people you know have a much bigger impact on your routines than you may realize. Several studies have shown that workout partners are extremely effective in improving your fitness.

Part of this is accountability. Another study showed that simply receiving a check-in call asking about your exercise progress every two weeks, was enough to boost individuals’ performances once solo.

But the second factor has more to do with ego. No one wants to be the weakest link, either in a group fitness setting, or a one-on-one scenario. Because of this, working out with someone who is in slightly better shape than you, will kick your ass into gear.

Because of my flexible schedule, I wanted to find someone who also worked from home and could help add some regularity to my exercise routine during more irregular hours. Nothing is more stressful to me than a fitness studio at 6pm on a Tuesday. Nothing.

I’ll be back at the end of the month with a full report on how all my exercise experiments went! If any of you have any tips on building new movement habits, great fitness apps or classes, or creating accountability with a workout buddy, please tell me your fitness tales in the comments section!

The Wellness Project is now a book! It’s part memoir, part health primer, with 20 inflammation fighting recipes for clearer skin, better digestion, and a thriving thyroid. (Because who doesn’t wake up in the morning wanting a thriving thyroid?!). You can read more and preorder here. To read up on past experiments and get more tips from the trenches, click here.