Eggplant caponata always brings me back to my semester abroad in Rome. The cramped three-bedroom apartment I shared with six other students was where a lot of my small kitchen experiments began.

Our galley kitchen probably had less counter space than my current Manhattan studio, and barely contained enough silverware and plates to feed all the roommates at once. And yet, being budget-conscious students in an overpriced touristy part of town, we didn’t have much choice but to visit the nearby outdoor market in Campo dei Fiori and cook for ourselves.I wrote a little essay in my cookbook called The Crostini Consultant about the dinner parties my male roommates attempted to throw. They would emerge with just a few undercooked chicken breasts that were meant to feed a dozen kids seated on our floor getting drunk off of supermarket jug rosato. Bless their hearts. Inevitably, I would be called in for culinary damage control. The solution? Pane rustico, sliced thin and topped with a simple eggplant-tomato spread.

Even without two clueless boys as my sous chefs, eggplant caponata is still one of my go-to recipes to feed a crowd of friends. Today, I sadly don’t have the luxury of stretching it with crusty bread. But luckily, I have the budget and the cookware to accommodate getting more than one eggplant involved.

When I was brainstorming recipes for our Friends In Food dinner last month, naturally the caponata came to mind. So I decided to put a little spin on it with some of my favorite spices from the veggie salads I ate in Morocco. I served the Moroccan eggplant caponata on top of Mary’s Gone Crackers as a second appetizer option alongside this Roasted Beet Hummus.

Since the potluck buffet was much more abundant than our table ever was in apt 3F, and the food blogger crowd had a lot more restraint than twelve teenagers drunk on jug wine, I ended up coming home with half of the Moroccan eggplant caponata. And since I am now in the position to not have to hide my leftovers underneath a block of molding pecorino, I enjoyed the remaining eggplant for the rest of the week as a topping for gluten-free pasta.

The combination was so good, I thought I’d share this leftover recipe miracle with you all. The spiced eggplant caponata pasta with sweet golden raisins and fresh parsley is the perfect simple weeknight meal to serve hungry friends, even if there’s no jug wine involved.

And if you love using eggplant caponata with pasta, you’ll have to check out this eggplant lasagna recipe and this Turkish eggplant casserole recipe for another dairy-free option. 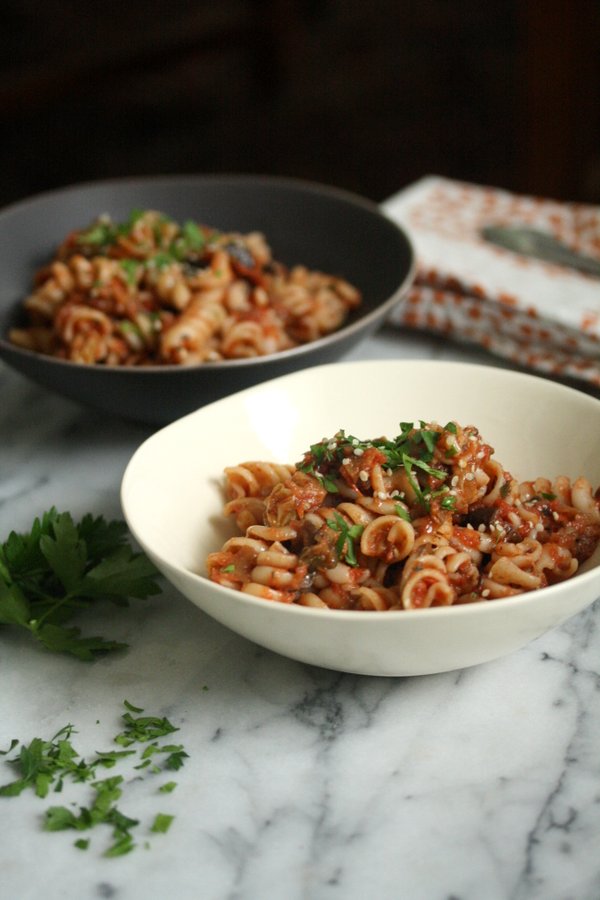 If you make this, tag @phoebelapine and #feedmephoebe – I’d love to see it!
249 shares